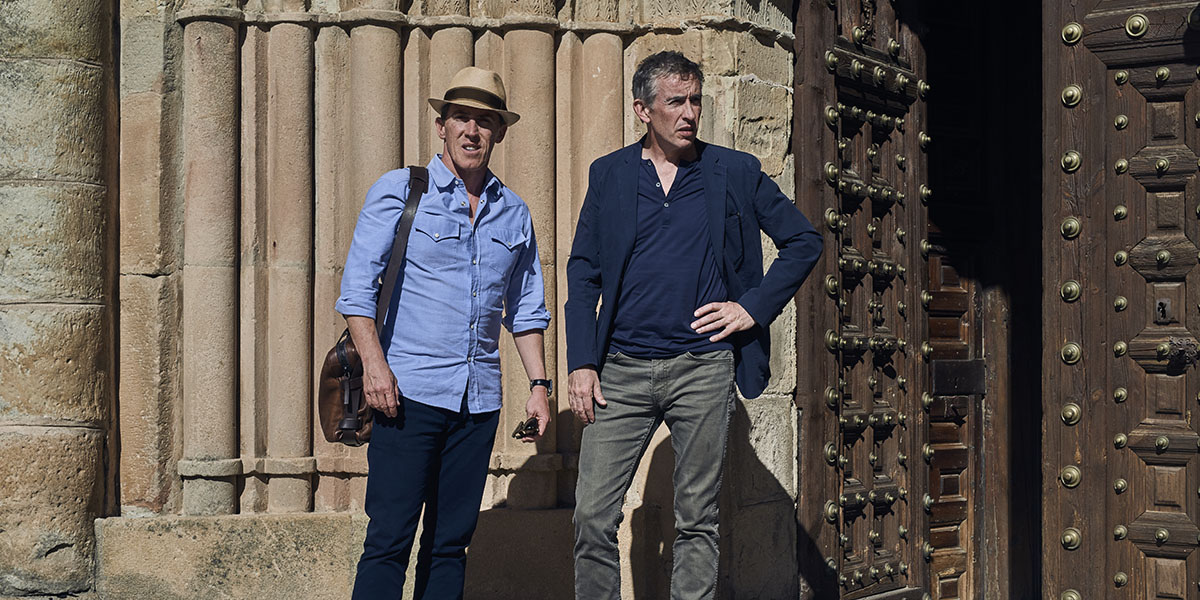 The Trip from A to Z

In The Trip to Spain (now playing at TIFF Bell Lightbox), Michael Winterbottom’s follow up to 2010’s The Trip and 2014’s The Trip to Italy, sun hats are again donned, fragile masculine crises are unveiled, and delicious meals at Michelin-starred restaurants are consumed (with nary an Instagram food photo taken). The popular series’ incredibly fun conceit, which always pairs actor Steve Coogan with his best friend Rob Brydon as they take an impression-laden road trip to eat their way across a European country, is an irresistible summer watch. (The second season of Master of None, which featured Aziz Ansari and Eric Wareheim bantering over their own gourmet meals in Italy, might have also taken a page or two from its influence.) Here, we break down the series’ most insidious jokes and notable highlights in a handy A-to-Z glossary. Bon appétit, Mr. Bond.

A: Alanis. In an early scene in The Trip to Italy, the duo blast Alanis Morissette’s Jagged Little Pill opener “All I Really Want” while riffing at length on the singer’s Canadian heritage. (Says Brydon: “Avril Lavigne is, in many ways, the young person’s Alanis Morissette.”) Fun fact: the song’s appearance in the film led to Morissette’s album re-entering the UK charts at number 40.

See also: ABBA (the two compete in a sing-off of “The Winner Takes It All” in the original Trip to see who has the better pitch); the Amalfi coast

B: Brydon, Rob. One of the co-stars of the Trip franchise, Brydon is Coogan’s best friend and a thorn in his side. Having appeared in the BBC comedies Gavin & Stacey, Marion and Geoff, and his own (albeit briefly airing) talk show, The Rob Brydon Show, he and Coogan compete in a constant pissing contest over their careers, happiness, and who can do the best impression of Michael Caine.

See also: BBC (the channel where The Trip airs as an 18-episode TV show), Barolo wine, and Bowie (in the pantheon of their incredible impressions).

C: “Come, come, Mr. Bond.” This memorable comedic set piece sees Brydon play the villain to Coogan’s Bond. In The Trip to Spain, they play-act Coogan being poisoned by Brydon, screaming and writhing in their fine dining environment.

See also: Caine, Michael (their most iconic feat of mimicry); Clark, James (the series’ cinematographer, who gets the golden vistas and lengthy restaurant dialogue scenes in the film just right)

D: Dirt. Coogan is served this dish at the acclaimed L’Enclume restaurant in the first Trip film. The dish, which mimics the appearance of soil, is actually deep-fried artichoke leaves and malt powder sprinkled over a mousse made from goat cheese and artichoke purée. In an interview with Bon Appetit, the actor called it one of the best five meals he’s ever eaten.

E: Extebarri. At this Spanish joint, better known as one of the best 10 restaurants in the world, Brydon and Coogan consume “life-affirming butter” made from goat’s milk.

F: Fragile masculinity. A big part of the fun of forcing two men entering their 50s to spend countless hours in a rental car together is watching them fall apart. Their fixation on imitating their heroes is only a way to avoid their obsession with death. The duo’s male friendship is The Trip’s bittersweet love story.

See also: “forced rhubarb,” the veal of the vegetable world, served at Hipping Hall in the first Trip film

G: Godfather, The. One of the many pop-culture reference points to get The Trip treatment includes a competition to see whose Brando is better. (Both are jaw-dropping.)

H: Hollywood. In the series, both Brydon and Coogan play fictionalized versions of themselves, which necessitates scenes of combative phone calls with their agents. The actors who are slagged off in the newest Trip include Toms of all stripes (Hiddleston, Hardy, Cruise), and human punching bag Ricky Gervais.

See also: Harrison, Noel. (The syrupy “The Windmills of Your Mind” is the closing track to The Trip to Spain.)

I: Improvisation. The Trip movies are entirely improvised, with Coogan and Brydon developing their uproarious bits and emotional plot points in the moment. In an interview with IndieWire, Coogan admitted to being a “self-editor” who will often stop and start a joke mid-scene to get it perfect. Brydon is a bit wilder and trusts that director Michael Winterbottom will fix it in post. 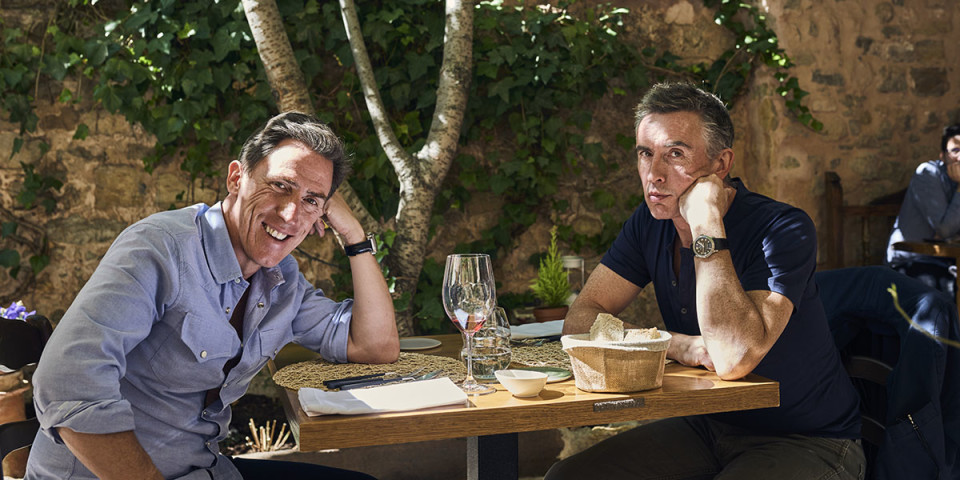 Rob Brydon and Steve Coogan in the newest film, The Trip to Spain, now playing at TIFF Bell Lightbox.

__J: Joe. __Coogan’s son in all three Trip movies, played by Timothy Leach. Like all children of Hollywood actors, he has a complicated relationship with his father.

K: Keats. Every Trip movie has a literary reference, both framing Brydon and Coogan’s travel itinerary and offering a thematic undercurrent to the plot. In The Trip to Italy, Brydon and Coogan discuss this Romantic poet at length, visiting the Keats-Shelley memorial in Rome.

L: Lennon & McCartney. These British heavyweights make frequent appearances throughout the films with Brydon and Coogan imitating the two Beatles songwriters, in addition to other UK artists like Mick Jagger and Morrissey.

M: Mini Cooper. In The Trip to Italy, Brydon and Coogan rent this car in a nod to the 1969 heist film The Italian Job. Their exhaustive Michael Caine impressions are not far behind.

See also: Mann, Michael (at the end of The Trip to Italy, Brydon is offered a role in the director’s newest film); the moors

N: Nöla. Another restaurant visited by Brydon and Coogan in Spain after an encounter with a douchey busker whips Coogan into a hysteric outburst. Here, a belaboured Roger Moore impression happens over a long and leisurely lunch.

O: The Observer. In the original Trip, this English newspaper asks Coogan to tour the finest restaurants in northern England for an article. While he originally imagines it as a way to get away with his (much younger) girlfriend, she cancels at the last minute, which is how Coogan’s frenemy Brydon ends up on the trip of a lifetime. (Notably, Coogan and Brydon are not actual friends in real life.)

See also: Orwell, George (Coogan extends his trip to Spain to work on a book inspired by the author’s Homage to Catalonia.)

P: Philomena. This 2013 drama, which was directed by Stephen Frears and starred Judy Dench and Steve Coogan, is frequently mentioned by Coogan as a way to bolster his success. His inability to get a project greenlit after being nominated for an Oscar for Best Adapted Screenplay is a notable plot point in The Trip to Spain.

See also: pubs at every price point (such as The Angel Inn at Yorkshire in the first Trip film).

Q: Quixote, Don. Not only do Brydon and Coogan quibble exhaustively about Cervantes' text in The Trip to Spain, but they also do a themed photoshoot near some windmills, donkeys and Sancho Panza costume included.

R: Romantic poets. The Trip offers references both high- and lowbrow, so if James Bond isn’t cultured enough for you, you might enjoy their admiration for 18th century poetry, including the work of Percy Bysshe Shelley, John Keats, and Lord Byron.

S: Sally. Rob Brydon’s wife, played by Rebecca Johnson. If there’s one criticism to be levelled at the series, it’s that the women in the Trip films are often relegated to wives, girlfriends, publicists, and waitresses.

See also: Stiller, Ben (who has an uncredited appearance in the first Trip series)

T: Tristram Shandy. In 2005, Winterbottom cast Brydon and Coogan to play the fictionalized, egotistical actor versions of themselves, attempting to film an unfilmable adaptation of Laurence Sterne’s 18th-century metafictional novel Tristram Shandy. After witnessing their combative chemistry in an early improvised scene, Winterbottom began thinking about how he could create The Trip.

U: Umbrage. Much is taken throughout the series, whether it’s due to jealousy for another person’s success, an inability to successfully hit on an attractive Italian stranger, or spending way too much time with a person who is exactly like you.

V: Vintage costume drama. In one of the series’ most inspired bits (from the first film), Brydon and Coogan warm up to the idea of shooting a BBC costume drama together, mostly so they can repeat hacky lines like, “Gentlemen, to bed! For we rise at daybreak!” Inevitably, an imitation of actor Billy Connolly finds its way on screen.

W: Winterbottom, Michael. The director of every Trip film is a frequent collaborator, having worked with Coogan and Byrdon in his films 24-Hour Party People, Tristram Shandy: A Cock & Bull Story, and last year’s The Look of Love.

Also see: Wuthering Heights (both the novel and the Kate Bush song); wine; being Welsh (and being made fun of for being Welsh) 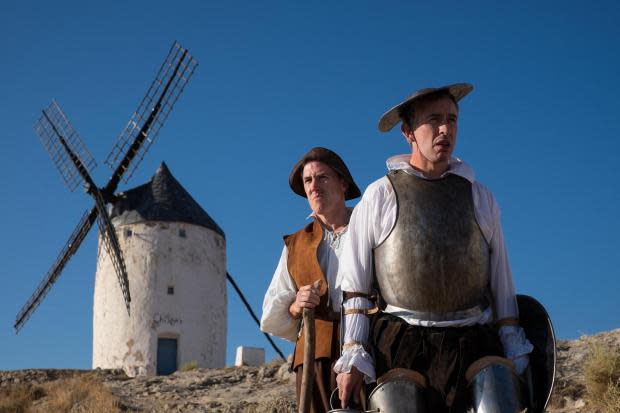 X: (E)xotic Destinations. Whether it’s the peaty moorlands of Lancashire, the deep blue waters of the Amalfi coast, or the stirring windmills of Cosuegra, Spain, a Trip film is all about the destination. The fact that Brydon and Coogan’s small-scale anxieties take place against such cinematic backdrops is part of the series’ joy and novelty.

Y: The Yorke Arms. A Michelin-starred restaurant and hotel located in Nidderdale, North Yorkville. The duo visit in The Trip, where they try out their best Woody Allen: “The food here is terrible, and in such small portions.”

See also: “You were only supposed to blow the bloody doors off!” — an oft-repeated Michael Caine line from The Italian Job.

Z: Zucchini. This seasonal vegetable is served in an elaborate array of dishes in The Trip to Italy, most deliciously in a linguine dish with red prawns and tarragon at Ristorante il Riccio on the island of Capri.

__If you’re feeling ravenous for a buddy foodie comedy with a side of middle-aged anxiety, look no further than Michael Winterbottom’s The Trip to Spain, now playing at TIFF Bell Lightbox. __