The Rules of the Elaborate Movie Death

MOTIF(F): Tropes in film we can't get enough of

Welcome to MOTIF(F), a weekly unpacking of a film trope we love. This week, let's get ready to die...

A transport truck dangles over the edge of a bridge, its back wheels barely hanging onto the guard rail. Villainous trucker Red (J.T. Walsh) stands on the roof of its cabin, whipping Jeff (Kurt Russell) with a chain wrapped around his wrist. Poor Jeff is holding on about as well as the truck, doing his best not to meet his fate at the hands of this diabolical monster. The chain comes down with one last strike, but in a surprise twist, Jeff manages to grab ahold of its metal links. After the two exchange knowing glances, Jeff pulls and Red is sent plunging into the rocky river below.

As the truck continues to shift forward with terrifying jolts, our hero manages to climb back to safety. He races to free his kidnapped wife Amy (Kathleen Quinlan), who is now trapped in a pickup truck attached to the back of the precarious rig. Her leg is injured, but Jeff carefully pulls her free. The couple embraces and sobs with relief, but to their dismay, they see Red is still moving beyond the guard rail. Jeff watches in horror, but Amy has no qualms with taking matters into her own hands. She shifts the pickup into drive and pushes the transport off the bridge, crashing it grill-first onto her abductor.

In the summer of 2015, TIFF Bell Lightbox held a retrospective on the career of Kurt Russell — including classics like Escape from New York (‘81), The Thing (‘82) and Backdraft (‘91) — but of the films being shown, I knew I had to re-watch one: 1997’s Breakdown. A thriller about a man’s wife disappearing during a cross-country drive, Breakdown is a bit too clever and silly for its own good, but I hadn’t seen it since my family huddled around our old, boxy television and watched a rented VHS copy over 15 years ago. Since then, the film has continued to hold a special place in my heart, all due to that final death scene.

As long as I can recall, I’ve had a fascination with clever deaths in film. To this day, I wait for the showdown in a movie, hoping the antagonist isn’t defeated by a simple gunshot or a stab to the heart. This may seem morbid, but as this obsession grew along with all things cinema, I realized I wasn’t alone.

There are tons of elaborate casualties (how about the broken window that impales baddie Carl, played by Tony Goldwyn, in 1990’s Ghost?) and shocking film fatalities (the scene when the horse runs off the ferry in 2002’s The Ring!), but what is it exactly that makes certain deaths in movies more memorable than others? I’ve got some hunches.

USE OF AN UNUSUAL OBJECT

When the Coen Brothers wrote and directed Fargo, at one point they sat down and decided to paint the snowy landscape of North Dakota red. The logical way to do it? Jam Steve Buscemi’s body into a woodchipper. A common weapon makes a common death, so I love that the Coens found a deadly use for an unusual household tool. Another death-by-unlikely-prop is when Hedy (Jennifer Jason Leigh) stabs Sam (Steven Weber) in the eye with a stiletto in Single White Female. 1996’s Scream has two standouts: when Stu (Matthew Lillard) is face-fried by a television set, and most iconically, when Tatum (Rose McGowan) is neck-crushed by a motorized garage door. You’ll never look at a doggie door the same way again.

An interesting location makes for a compelling death scene. Growing up in rural Ontario, my school would go on field trips to the local fall fair, and I still have a vivid memory of an exhibit where a small doll was placed in a wagon of grain in order to show the dangers of agricultural quicksand (also terrifyingly known as “grain entrapment”). In 1985’s Witness, there’s a retaliatory version of this exact scenario. The setting of an Amish farm allows for the creative use of a silo when John (Harrison Ford) releases a tonne of corn onto corrupt cop Fergie (Angus MacInnes), drowning him in grain. The greenhouse in 1992’s The Hand that Rocks the Cradle is the location for one of my all-time favourite screen deaths, where a trap set by evil nanny Peyton (Rebecca De Mornay) causes the roof to come crashing down onto Marlene (Julianne Moore), the shattered glass stabbing her body. Also think of the subway tunnel in 1994’s Speed. The final clash between Jack (Keanu Reeves) and Payne (Dennis Hopper) on the roof of a moving train car ends with Payne losing his head when it collides with an overhead signal. Now, that’s memorable.

I have vivid memories, as I’m sure most do, of the final battles in Disney films. In these movies, creators took liberties with falls and elevated them. In Snow White and the Seven Dwarfs, lightning strikes the precipice on which the evil queen stands, causing her to fall off the mountainside, the boulder she failed to push onto the Dwarfs tumbling after her. As Ratigan stands on the hour hand of Big Ben in The Great Mouse Detective (my personal Disney favourite), the clock strikes 10pm and the bell's thunderous ring shakes him off the tower. Lastly, in The Hunchback of Notre Dame, Frollo stands on a gargoyle and raises his sword at Quasimodo, only for the gargoyle to crack and send him falling into molten copper. Falls are often a classic way for a villain to go. And for someone like Disney, this convention allows heroes to defeat their villains without directly destroying them. Still, a death can be powerful and also accidental. Think of Clayton's death in Tarzan – as he slashes his machete through the tree vines that entangle him, Clayton is unaware the vines are actually keeping him aloft. Tarzan tries to warn him, but when the last one is sliced, Clayton plummets. The vine wrapped around his neck suddenly becomes taut and his machete hits the ground without him. It's quite graphic and very detailed. 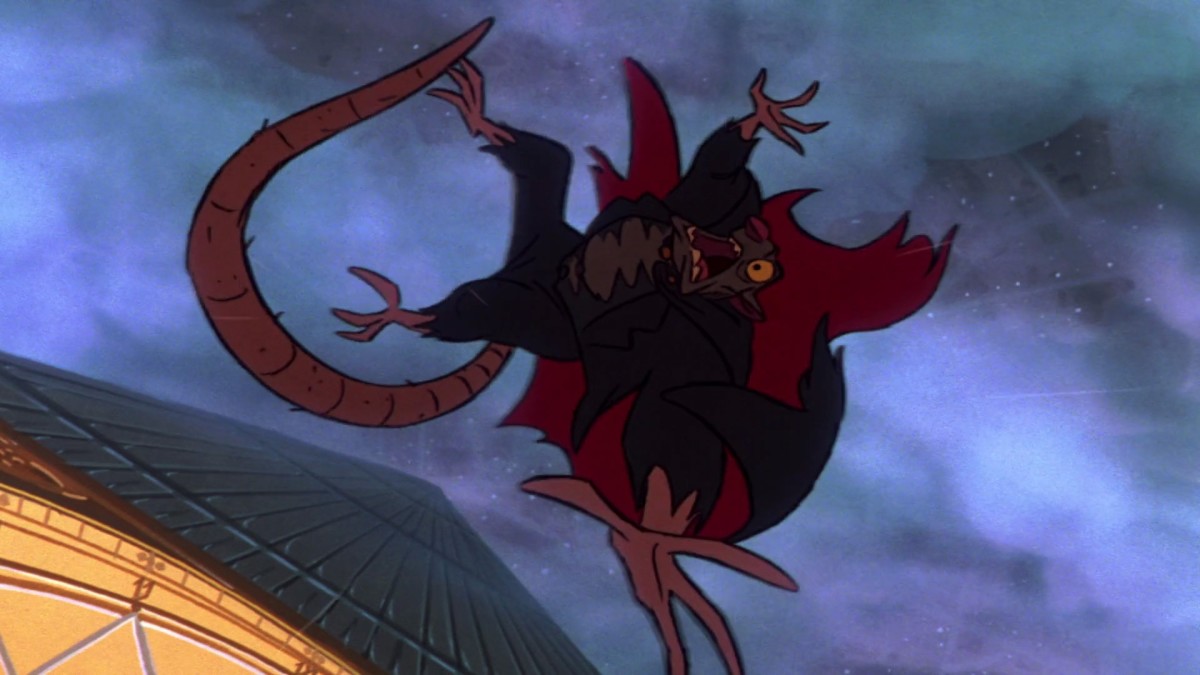 *Chloe Bryant Yorkin – Season One, Episode Eight – Decapitated by a cherry picker while drunkenly standing up through a limousine sunroof

*Kenneth MacDonald Henderson – Season Four, Episode 11 – Sliced in half while trying to rescue people trapped in an elevator

*Andrea Kuhn – Season Five, Episode One – Pushed by her husband, falling eye-first onto a fire poker

*And the fatality that terrified me the most, due to its complete mundaneness...

*Lilian Grace Montrose – Season One, Episode 13 – Hit in the head by a flying golf ball

A VICTIM OF THEIR OWN CREATION

None other than 1994’s The Lion King elevates the formula when Simba (Matthew Broderick) battles Scar (Jeremy Irons). Instead of the good guy offering the killshot, Scar’s lackies, those cackling hyenas, finish him off instead. Again, this is a fantastic option for Disney as Simba doesn’t do the killing himself but it also adds an interesting layer of complexity whereby the villain is destroyed by his own means. It’s like his comeuppance is even more deserved. This type of retribution can also be found in 2001’s Hannibal when Verger (Gary Oldman) is fed to his own man-eating boars.

Simply put, if you have a fantastic villain, make their end fantastical. The James Bond films include a wide array of amazing antagonists, and one of the best is Oddjob from 1964’s Goldfinger with his razor-edged bowler hat as his weapon of choice. As Oddjob pulls his bowler from the metal bars it’s been jammed in, Bond connects a sparking cable to the steel, electrocuting him. Literal fireworks. In 1997’s Con Air, awesomely-deranged convict Cyrus “The Virus” Grissom (played by the born-villainous John Malkovich) doesn’t just crash through an overpass while attached to a fire truck’s ladder, his head is also crushedby a construction pounder. Thanks Nic Cage!

Sure it can be cheesy, but a pre-death tagline always amplifies memorability when it’s perfectly delivered by your swarmy, iconic villain. '90s action movies offer some of the best last lines in cinema. 1993’s Cliffhanger boasts a wonderful foe in John Lithgow’s Eric and his fight with Gabe (Sylvester Stallone) atop a helicopter suspended from a rock face by a climbing ladder already includes a great location. But when Gabe kicks Eric while uttering, “Keep you arms and legs in the vehicle at all times!”, and then the helicopter plummets to the ground this showdown amps up to the next level. And what does Harry (Arnold Schwarzenegger) say just before firing a jet rocket from which Salim (Art Malik) dangles in 1994’s True Lies? “You’re fired.”