The Odd Obsessions of Kon Ichikawa

The fifth of several profiles of the great Japanese directors spotlighted in this season’s flagship TIFF Cinematheque programme Summer in Japan.

In a career extending from the mid-1930s to the mid-2000s, Kon Ichikawa directed almost 80 films that ranged widely in genre, form, and tone. He has made ferociously humanist war films (The Burmese Harp, Fires on the Plain) and light-hearted domestic comedies (Being Two Isn’t Easy); formalist documentaries (Tokyo Olympiad) and extravagant period pieces (An Actor’s Revenge); his celebrated adaptations of famous Japanese novels such as Enjo and The Makioka Sisters earned him a reputation as a “deadpan sophisticate”(Pauline Kael) with an elegant compositional style, venomous wit, and narrative daring, but he was also a crafty master of populist entertainments.

The problems of apprehension and evaluation posed by the diversity and magnitude of Ichikawa’s oeuvre are compounded by other factors, notably the formidable influence of his wife and scenarist, Natto Wada, whose withdrawal from writing his scripts in the mid-1960s marked a turning point in his career; and the difficulties he encountered with the studios, who occasionally punished his failures and transgressions by assigning him dubious projects, or hired him only on “salvage operations.” While often referred to as a link between the “golden age” of Japanese cinema and the New Wave of the ’60s, Ichikawa has rarely been given his due as an innovator, even though his experiments with formal elements (the CinemaScope frame, the tonalities of black and white and colour, the graphic design of compositions, the use of freeze frames, masking, flash cutaways), with unconventional registers of dialogue and acting, and with subjective or surreal imagery are among the most daring and influential in postwar Japanese cinema. 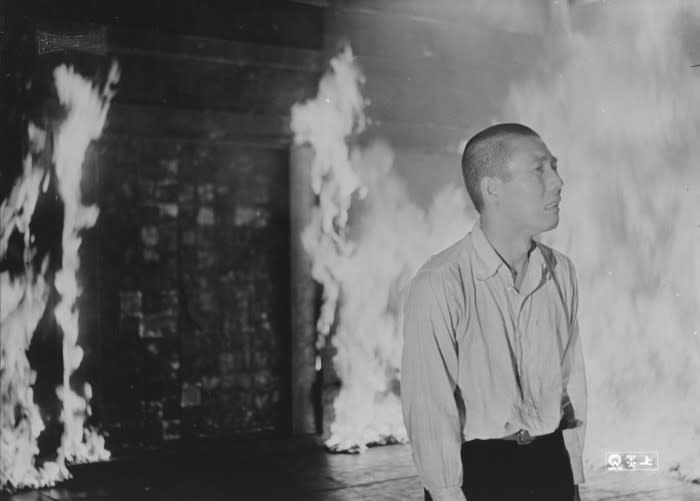 Many critics have attempted to discern unifying patterns of tone, theme, and visual composition in the bewildering sprawl of Ichikawa’s work. Many of his films revolve around tenacity and madness (which are often synonymous); motifs of fire (Enjo, Fires on the Plain), snow (The Makioka Sisters), poisoning (Odd Obsession), and nuclear or apocalyptic anxiety define Ichikawa’s world, as do his protagonists, most of them alienated, isolated, or obsessed outsiders struggling against implacable systems (the family, the army, Japan itself) or indifferent nature (Alone Across the Pacific). One of Ichikawa’s signature images replicates this engulfing, solitary struggle: a long shot of a lone figure in a vast landscape. As is frequently pointed out by both Ichikawa and his commentators, his apprenticeship in manga films and anime shaped his approach to narrative structure and visual composition, which tends to be both graphically organized, asymmetrical and dynamic, cursive in its articulation. Obsessive in his attention to realistic detail, Ichikawa relied on lengthy, meticulous planning, a method reminiscent of Alfred Hitchcock’s (which belies the fact that the great “controllers” of cinema, those who exert the most rigorous dominion, necessarily have the most unified bodies of work). Ichikawa’s perfectionism, painterly instincts, predilection for literary adaptations and emphasis on affectless acting and blank faces resemble a director with whom Ichikawa seems to have no similarity — Robert Bresson — while the ironic, often coldly detached view that distinguishes Ichikawa’s cinema has been described with epithets (“clinical,” “dispassionate,” “contemptuous,” “derisive”) that seem to align his work with that of Bresson’s compatriot Claude Chabrol. 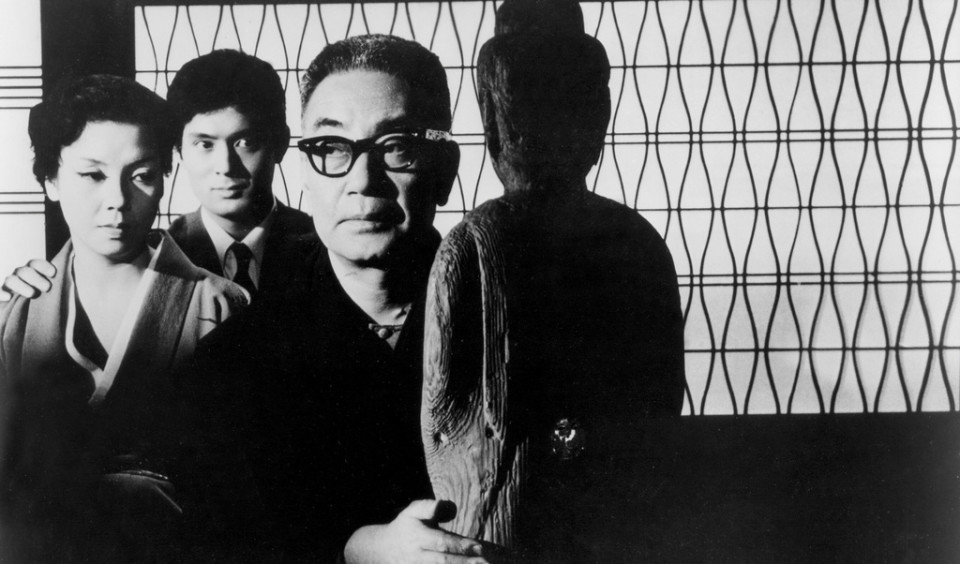 A French critic, condemning Odd Obsession (Ichikawa’s most Chabrolian film) as “nauseating trash,” compared the characters to “confused larvae moving about in a green aquarium light” — a motif that was echoed by the more positively inclined Max Tessier, who called his introduction to the Japanese master “Kon Ichikawa the Entomologist” and claimed that the director “observes his protagonists struggle like powerless insects with their destinies.” As if to oblige the critics, Ichikawa’s cinema is replete with animal and insect imagery, though this is not necessarily a signifier of the director’s cruel authority over his characters. Instead, it can be employed to depict a Darwinian vision of survival during the war — most potently in the apocalyptic Fires on the Plain, which explicitly depicts cannibalism in the Japanese army during the Pacific War —or, more generally, it can stand as evidence of the director’s deeply pessimistic sense of the world.

Fires on the Plain

No matter how comic, sentimental, or humanist Ichikawa’s cinema, it is shot through with despair and anguish. Even though the director asserts that such films as Tokyo Olympiad and Being Two Isn’t Easy are affirmative “hymns to life,” one returns to the films to find them full of unease, loneliness, dissolution. The opulent Makioka Sisters (the sole Ichikawa film of his late period to become a hit in the West) blazes with postcard cherry blossoms and whispers with the swish and slither of brocade kimonos, but beneath its delicate theme of evanescence is a hard, claustral tale of money (the first word uttered in the film) and social regulation. 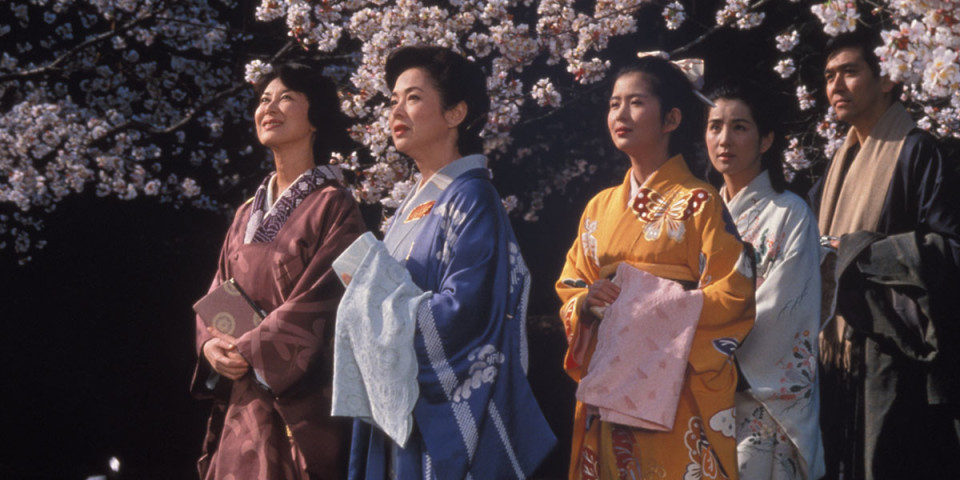 It is this pessimism that perhaps most strongly marks out Ichikawa as a predecessor of the New Wave. His trilogy of black comedies about the chaotic world of postwar Japan (Pu-san, A Full-up Train, A Billionaire) anticipate Yasuzo Masumura’s rude skewerings of Japan, Inc., while Punishment Room’s portrait of the brutality and anomie of postwar youth foreshadows Nagisa Oshima’s Cruel Story of Youth. The pungent pageantry of sex and stink in an isolated mountain village in The Men of Tohoku, Ichikawa’s first Scope film, predates Shohei Imamura’s ribald The Ballad of Narayama by almost three decades, while An Actor’s Revenge has become something of a postmodernist playground for cultural theorists, with its gender, genre, and role games, its seemingly inapt music, its slyly imbricated narrative and self-observant spectacle. The catalogue could include many other examples, all of them testifying to the fact that Ichikawa, was a searching, often brilliant innovator whose influence was as considerable as his range.

This article was adapted from a longer essay for TIFF Cinematheque’s Kon Ichikawa retrospective in Summer 2001.