Note: this article contains spoilers for the film The Lobster. Deal with it.

There’s you, benign 30-something in a plaid shirt, drinking a craft beer, asking me for my top five Bill Murray movies.

There’s us, sitting in some dimly lit bar where you quoted me the Yelp review (“the perogies and the broccoli poutine are fantastic”), penile Edison bulbs looming overhead.

There’s me, thinking if I have to go on one more Tinder date, I am going to gnaw my own fucking arm off.

Yorgos Lanthimos’ The Lobster is the only film I have ever seen to truly understand the existential hellscape of modern dating, where the people are like UberEats, and the ensuing relationship is like runny, lukewarm pad thai. Very few film stories, save for Paddy Chayefsky’s brilliant screenplay for the 1955 film Marty1, truly portray what it’s like to be lonely. Movies dress up the search for love with passionate last-ditch efforts at the airport2 and grand wet t-shirt professions of devotion in the rain. But no one wants to talk about the hostile misery that attacks your face each hour. Our insatiable need to truly know another person and the impossible truth that most times, we’re all too selfish and scared. How people are ultimately, at their core, simple, stupid, animals. The Lobster really gets that last part.

This is Yorgos Lanthimos’ fourth feature after his films Kinetta (murder reenactments/resort town/nature vs. nurture), Dogtooth (coming of age/amazing framing/lots of incest) and Alps (gymnastics sequences/absurdist comedy/explicit violence). This emerging auteur of Greek film, a national cinema that’s becoming increasingly irate, is known for pitch-black comedy that sits on the precipice of death at all times. The Lobster is his first film in English, which I’m sure got greenlit due to its amazingly high concept – single people3 have 45 days to find a mate or they are turned into the animal of their choosing. The title comes from the protagonist’s desire to become a lobster – aristocratic, blue-blooded creatures that will live for upwards of 100 years. For the record, I would become a duck-billed platypus for reasons I have illustrated below.4

After his wife leaves him, Colin Farrell — with a dour, mustachioed, Kirk Van Houton-esque makeover — takes his dog (actually his brother who “didn’t make it”) to a dystopian hotel complex. His goal is to mingle with other hot local singles in his area in a series of bizarrely high-stakes rituals. Among the rejects include: a man who walks with a limp (played by Ben Whishaw), a young, pretty woman with a nosebleed and her best friend with perfect hair, a sad middle-aged woman offering butter biscuits and blowjobs like a liferaft (Extras’ Ashley Jensen, so devastating here) and inevitably, John C. Reilly.

“This is to show you how easy life is when there is two of something instead of just one,” explains the hotel manager (Peep Show’s Olivia Colman) as she places a padlock over Colin Farrell’s crotch. Another maid rubs herself against his pleated chinos in a deadening enforced sex act that neither party enjoys. When John C. Reilly is caught pleasuring himself, they stick his hand in the toaster.

In the dystopian universe of The Lobster, no one is allowed to escape or touch themselves or commit suicide. Plus they have that whole “getting turned into an animal in 45 days or less” thing to worry about, so the boys and girls dance and dine together and try to flirt in the swimming pool under the scornful eye of the hotel staff. Woven through these mating rituals is an unrelenting pressure to fall in love, the likes of which I haven’t seen since I went on Birthright in 2011.5 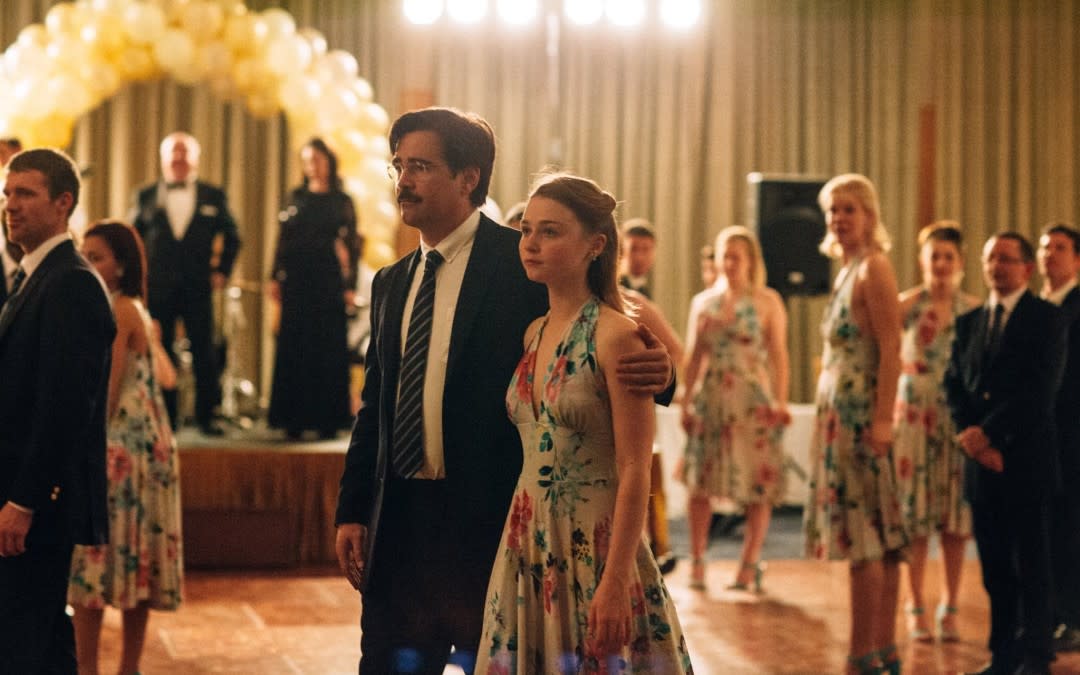 Even though these singles face the very real possibility of being turned into an animal against their will, they still can’t help their desire to trade up. In the most brutal scene in the film, Ashley Jensen hurls herself off the balcony after her frequent advances are rejected by our protagonist. As she writhes in pain on the pavement, still alive and bleeding out, Colin Farrell tries to chat up the bonier, younger socipath he's interested in. Men!

Love, in the world of The Lobster, is when two people with corresponding unique characteristics find each other. And the mechanics of the process are not so different from the multitude of algorithms and clickable interests that dating apps employ to pair us all off.6 It’s about proving your lovability on a mainstage. Winning The Lobster means meeting a mate with a corresponding trait and graduating to a shared hotel room for a further trial period of compatibility (i.e. terrible sex from behind). Being in a couple means that you may return to society again, unencumbered of your loneliness. When you are no longer single, you are free.

Just like real life, there are loners in The Lobster, but they are hunted like game for sport. After Colin Farrell fails to successfully dupe the cruelest woman imaginable into being his soulmate, he flees for the wild world outside his hotel. The loners are a pack of outsiders hiding in the forest, helmed by their tyrannical yet incredibly vulnerable leader, played by Léa Seydoux. (I love the varied terrain where Lanthimos shot this movie. It’s a place that has palm trees, but mountains, deep pine forests and a placid sea that stretches on to oblivion.) Together, yet always alone, the loners dance to electronic music on their individual headphones and learn how to hide from the singles who are forced to shoot them with tranquilizers for bonus time. They are banned from flirting. For fun, they dig their own graves. It is here that Colin Farrell finally meets his soulmate.

The fact that The Lobster is actually a love story is the movie’s cruelest and darkest twist of all. The first half of the film has been narrated by a voice-over from an unknown woman (played by Rachel Weisz), later revealed to be a loner in the woods. Her passionate courtship with our protagonist is coded in secrecy, yet becomes the only thing to root for. Together, they develop an unspoken language to express their feelings for each other. They also discover their matching characteristic – both are short-sighted.

On their trips to the city for supplies and for Seydoux to visit her parents7, Weisz and Farrell get to dress up in business casual clothing and play act the roles of two people in love. They perform the infatuation stage of early coupledom (the concern felt for your partner’s needs, the thrill you get referring to “your wife”) and fall more deeply for each other, at great risk to their safety. Had they met under the punishing, boner-killing awkwardness of the hotel, it’s possible that our lovers would have never connected. It’s often when you decide to be alone forever that you actually get a chance to fall in love.8

People in love are often short-sighted. The climax of The Lobster involves Farrell holding a steak knife to his eyeball, daring himself to become more like his blinded mate. It’s a direct parallel to the act of self-imposed violence in Lanthimos’ Dogtooth where Angeliki Papoulia violently knocks out her tooth with a free weight to show that she’s all grown up. Here, Lanthimos spares us the gore and holds on a static long take, keeping the audience in suspense as to whether or not Farrell's character completes the act, or silently brushes by his partner out into the world.

How often do we twist and punish each other just to make ourselves more like the other person in a relationship? What is the price we pay just so we don’t have to be alone? I have so much empathy for animals. My favourite images in The Lobster are when a character waits in isolation in the forest as a majestic peacock, camel or flamingo passes by. Flat light and wide compositions lend these scenes an air of complete banality. It gives me comfort to think that all the birds in the sky and all the fish in the sea might be the souls of people who sucked at Tinder. Swipe left, swipe right. Turn me into a platypus already.

1seriously, stop reading the article on your phone and watch Marty, already

2Love, Actually – a movie that manages to hate women and dress most of the cast in unflattering turtlenecks at the same time!

3 and in this world, you become single immediately as soon as your partner dies or you are dumped or cheated on, which really adds insult to injury

4 My reasoning for being a duck-billed platypus in this dystopian dating landscape:

5 I see you, Ashkenazi bond trader from North York who vaguely looked like a Semitic Justin Timberlake. We could be making alliyah, but you playing.

6According to OK Cupid, I am “less compassionate,” “less love-driven” but “more kinky” than most users. Also: apparently most of the people that visit my profile define themselves as “sapiosexual.” What does it all mean?

7These scenes are especially devastating, as Seydoux play-acts that she’s a normal business professional, instead of a literal mongrel hiding out in the woods who could be killed at any moment by some sad dude. I hate the injustice of The Lobster’s conceit, but I truly understand it. Single people will always be second-class citizens.

8 Not me though ;(  I’m through with love, I’ll never fall again