The Top Five producer picks his own top five 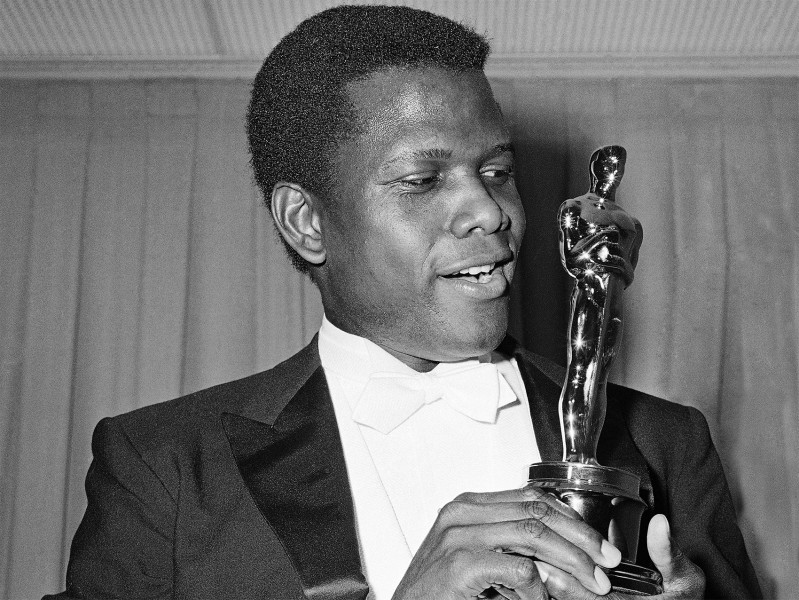 Nelson George is a cultural critic and the author of 15 books of nonfiction including Blackface: Reflections on African Americans and the Movies (1994), City Kid: A Writer's Memoir of Ghetto Life and Post-Soul Success (2009), and Thriller: The Musical Life of Michael Jackson (2010). He first got into filmmaking in 1986, when he helped finance Spike Lee’s feature debut She’s Gotta Have It, and has since worked extensively as a producer, writer and director, with credits on such projects as the Netflix series The Get Down (2017) and the Chris Rock films Good Hair (2009) and Top Five (2014).

As we prepare to launch our major retrospective Black Star: 100 Years of Black Excellence on Screen, we asked George for his own top five: a list of the Black cultural icons who have impacted his life.

My relationship to Black stars reflects my relationship to moviemaking as I’ve gone from devoted young movie fan to neophyte entertainment writer to screenwriter and director. I’ve always been awed by the power of these actors to inhabit my dreams, reflect my aspirations, and communicate intense emotions with just a tilt of the head. This list covers 50 years of me looking closely at magnificent faces. 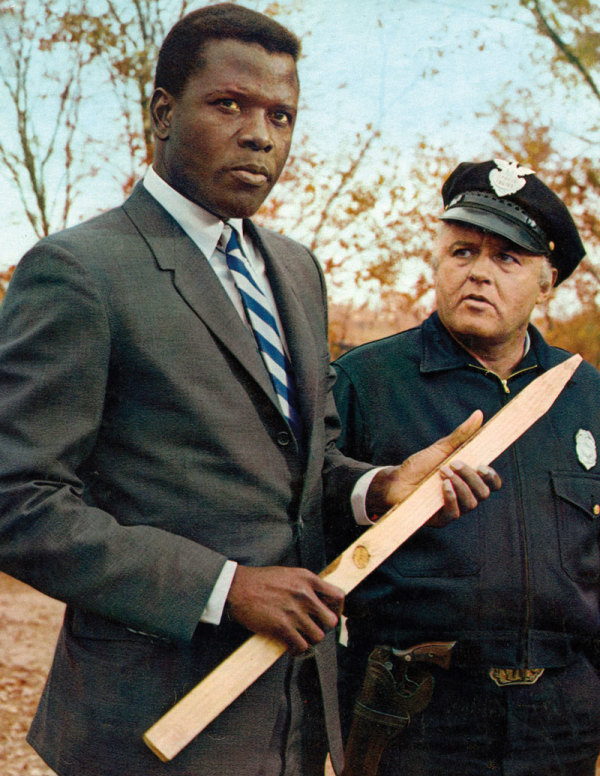 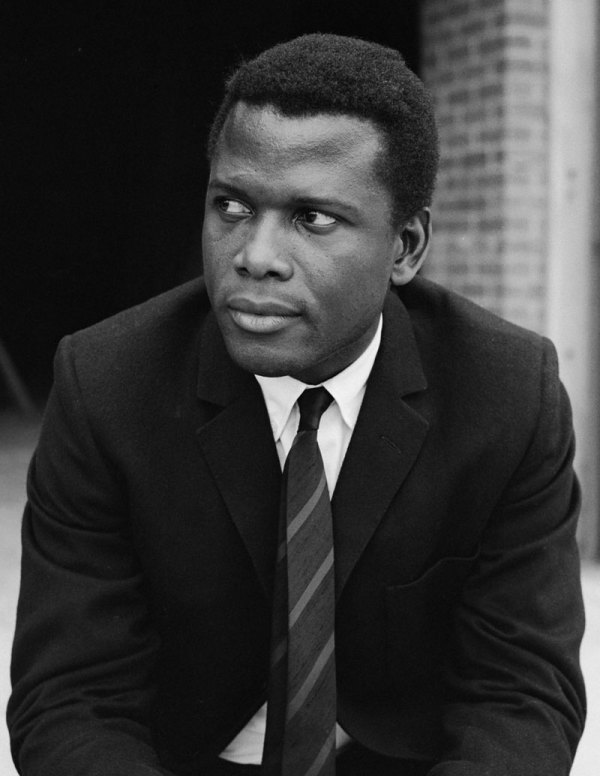 Black movie stardom begins with Sidney Poitier, but it wasn’t simply that he was an icon. For my single mother, raising a Black son in public housing in the Brooklyn ghetto of Brownsville, Poitier was a shining light she could point to as if to say, “There’s a place for you in the world and a way to be that’s very different from the low expectations of teachers, cops, and neighbours.” Sir Sid was a tall, dark, and handsome presence who wore suits to work, spoke the King’s English with gusto, and neither bopped to please the brothers or bowed to comfort white folks. Plus, the man had a killer smile.

In 1967, the year he became the first Black actor to be a number-one Hollywood box-office draw, I turned ten years old. My mother took me to see all three of Poitier’s hit films, To Sir, With Love, In the Heat of the Night, and Guess Who’s Coming to Dinner. Though his movies spanned genres and varied in quality, Poitier was always Poitier. He didn’t display great range, but true movie stars rarely do. The power of his presence was enough. Watching him move on screen — controlled, smart, and regal — shaped me. I aspire to his level of confidence every time I walk out my door. 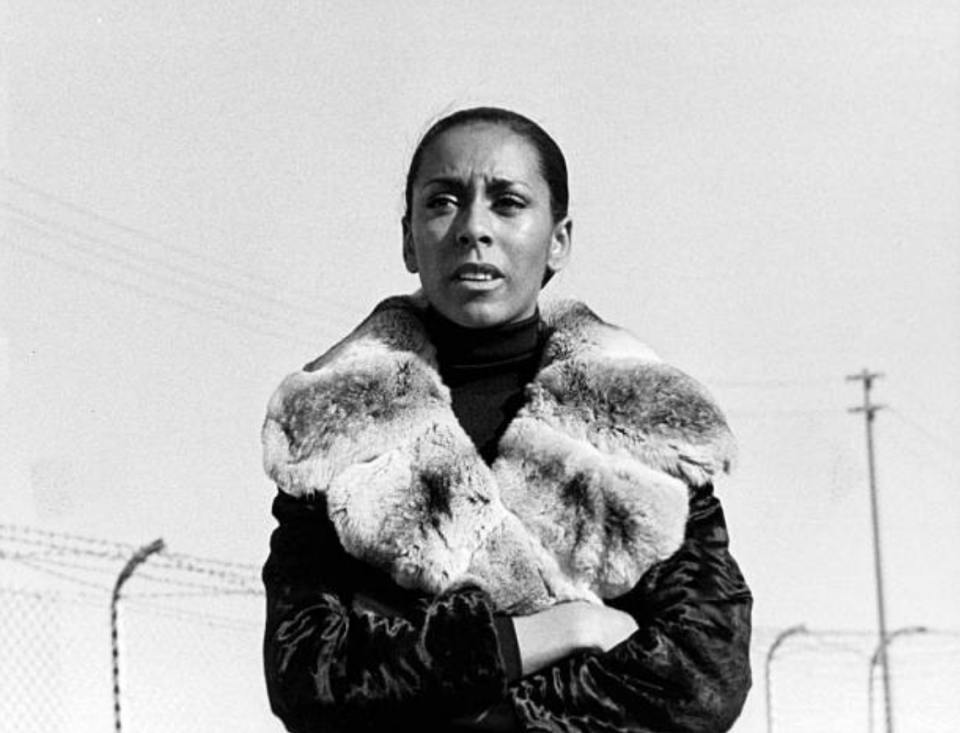 In 1972, I was an impressionable 15-year-old who would take “the iron horse” (the subway) to “the Deuce” (Times Square at 42nd Street). Me and my Brooklyn posse would see Blaxploitation, Bruce Lee, and Dirty Harry movies at the theatres lined up from Seventh to Eighth Avenue. It was at one of these movie houses where I first saw Super Fly. Nowadays, when people think of female characters in the Blaxploitation era, Pam Grier’s gun-toting badasses tend to come to mind. One of my favourite actors of the era was Sheila Frazier, who brought a sexy elegance to her role as Georgia, the girlfriend of coke dealer Priest (Ron O’Neal) in Super Fly and its sequel, Superfly T.N.T. (1973); she also makes a memorable appearance in Three the Hard Way (1974), where she’s kidnapped by a white supremacist who wants to infect all Black Americans with sickle cell anemia. Whether wearing a white fur hat with a matching coat in Super Fly or ridiculing a mad scientist in a button-down and pearls in Hard Way, Frazier was a stylish and confident screen presence. For an adolescent boy growing up on a steady diet of Blaxploitation and kung-fu movies, Frazier was the kind of woman I dreamed about dating when I grew up: sexy, smart, and personable.

Now let’s jump to 1978 when I was an intern at a Black weekly, the New York Amsterdam News, contributing entertainment pieces to earn college credit. I attended a junket for California Suite, which featured the on-camera pairing of comedy giants Bill Cosby and Richard Pryor. Frazier played Cosby’s wife, and at the junket I got the chance to tell her how much I enjoyed her work in those early-’70s films. Frazier must have been amused by my boyish gushing, because she let me accompany her to lunch. I remember carrying her bags as she shopped on Fifth Avenue, an adoring fan basking in a movie star’s aura, and probably blushing a bit too. Rarely does celluloid admiration meet real-world contact so pleasantly. 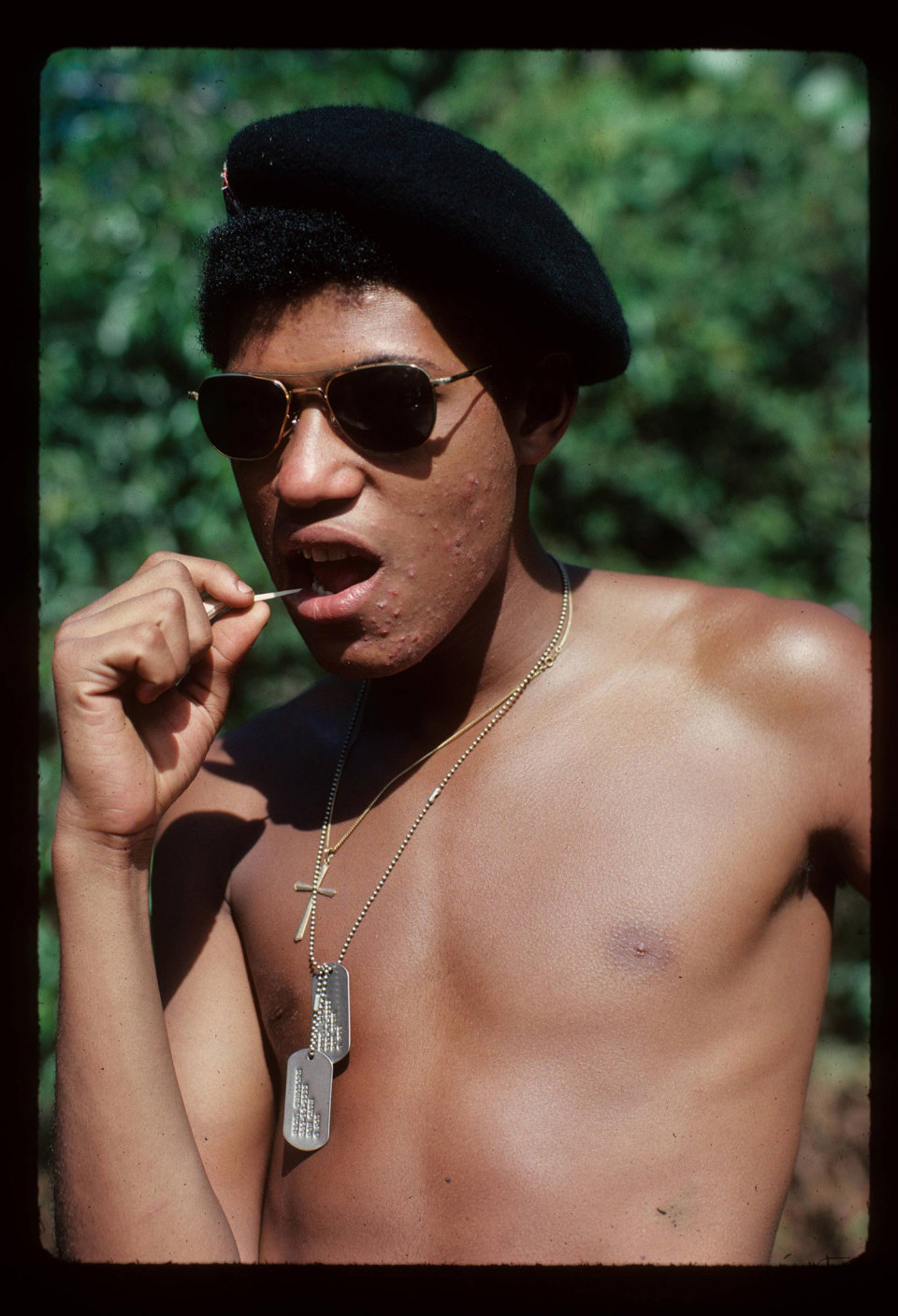 My internship at the Amsterdam News blessed me with many cool and unexpected cinematic moments. One of the most memorable was attending the 1979 New York premiere of Apocalypse Now at the grand (now closed) Ziegfeld Theater in midtown Manhattan. I’ll never forget the sound of helicopters filling the huge ornate movie theatre and  then slowly appearing on screen, leading us into Francis Ford Coppola’s wild war epic. The character of Tyrone “Clean” Miller, played by an adolescent Larry (now Laurence) Fishburne, caught my eye. As a live wire of childish energy caught up in the sad, twisted journey of a boat floating upriver into the mystical heart of the Vietnam War, Fishburne represented all the kids too young to understand the tragedy they were part of. I had a cousin who’d died in Vietnam, and I had spent much of my high-school years worried about the draft. When Clean dies on that odyssey, I felt like I’d been shot through the heart.

The next day, I reported to the legendary Plaza Hotel for an interview with the film’s two Black actors, Fishburne and Albert W. Hall. Fish was as wired off screen as he had been on, spending most of our time marvelling at the view and the impressive spread of food at our disposal. It was the first time I’d ever interviewed an actor who was younger than me.

From that odd first meeting, Fish has been a presence in my life. We were neighbours in the bohemian Fort Greene, Brooklyn area in the ’80s. I visited him on the set of Spike Lee’s film School Daze (1988) in Atlanta, and drove around South Central with him during the making of John Singleton's Boyz n the Hood (1991). Recently, we ran into each other at a party in Los Angeles, and met up a few days later to smoke cigars and trade stories. He is no longer a skinny kid, but his mind remains as wired as ever. 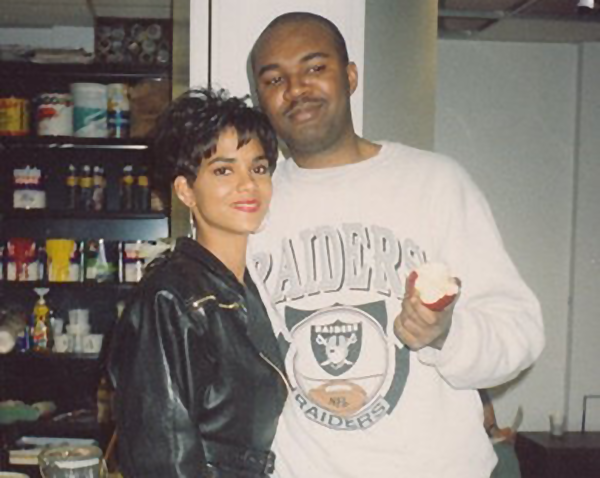 My first produced screenplay, Strictly Business (1991), was inspired by a party I had attended in Brooklyn in the late ’80s. I’d spotted a very straightlaced guy trying to get the phone number of a semi-legendary dancer known for turning out parties with her uninhibited moves, and it sparked an idea. To play this charismatic party person, the producers cast a woman named Halle Berry. I didn’t know anything about her, other than that she’d been a beauty queen in Ohio and was on an ABC sitcom called Living Dolls. She wasn’t from New York and she wasn’t a great dancer, so I was a little skeptical.

It didn’t take me long to understand this young woman was gonna be a star. When we met at the production office, I was introduced to a 10,000-watt smile and twinkling eyes. Her trademark short haircut was already in place. The film was Halle’s first lead role, and what she didn’t have yet in acting technique she made up for with an irresistible girl-next-door likeability. The camera can be a harsh judge: many a gifted theatre thespian, hot comedian, and top model have attempted to cross over, but if the camera doesn’t love you, there’s no future for you on the big screen. Luckily, the camera has always adored Halle, who, despite her obvious beauty, feels accessible, warm and, most crucially, vulnerable. In all her best performances, it’s her fragility that draws us in.

Funnily enough, it was during a brief and seemingly ordinary encounter between us on set that I first felt Halle’s true star power. While the crew was re-setting the lights for a scene, she turned towards me and asked me a question. Her gaze — the one she’d fix on cameras in films both good and bad over the ensuing decades — was aimed dead at me. It was a living, breathing close-up, and I kid you not, my brain froze. I literally could not think! I must’ve babbled some reply, she nodded, and returned to work. I was just dazzled by her, a feeling many movie lovers continue to share. 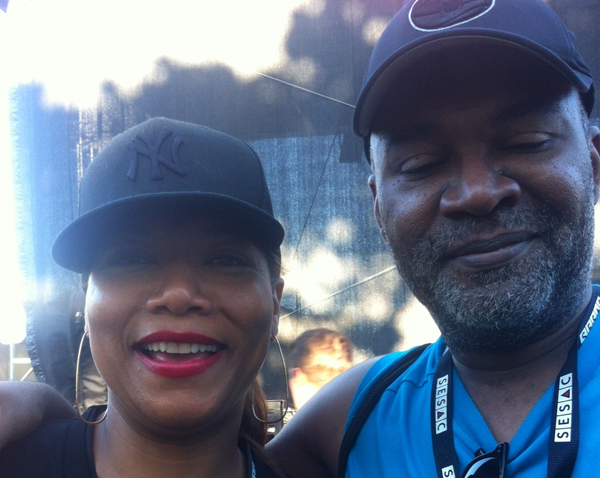 Nelson George poses with his friend and collaborator, Queen Latifah

Queen Latifah emerged on the late-’80s hip-hop scene with a resonant voice, witty rhymes, and a commanding physical presence. She wasn’t selling sex, she was presenting a socially-conscious, supremely confident frontwoman. Quickly, the Queen moved from behind the mic to in front of the camera, and founded a very successful production company called Flavor Unit Entertainment.

In the summer of 2006, I got HBO interested in making a film about the impact of the HIV/AIDS virus on Black America through the story of my HIV-positive sister, Andrea. It was Latifah’s commitment to playing the role that got HBO to greenlight our film, Life Support, with me serving as writer and director. She did it because she liked the script, had friends who had died because of the virus, and wanted to dig deep into the personal and sociopolitical nightmare of AIDS.

Quickly, it became clear what the visual strategy of the film should be: get as up close and personal to Latifah’s face as possible. Her face is a round, reddish moon, with large features that convey a wide range of amusement, anger, despair and, especially, longing. The character Latifah played was desperate to reconnect with her estranged daughter. In scene after scene, she was able to communicate that yearning with looks as vivid as moonlight. When you work with a true movie star, a close-up can be the only shot you need. 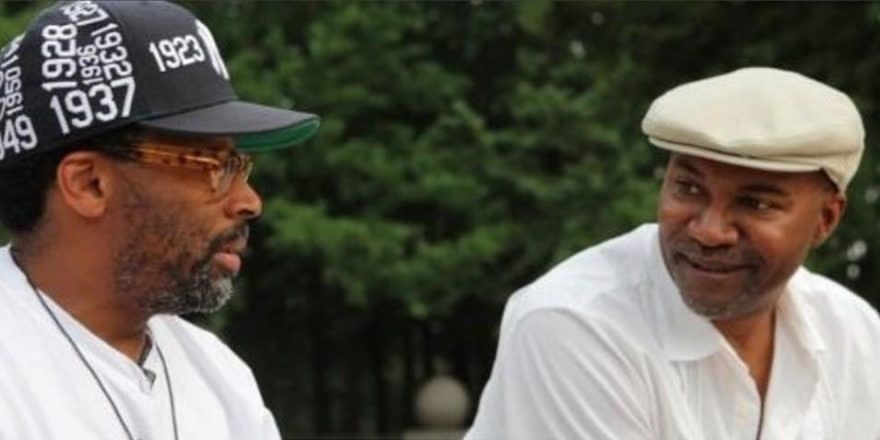 Having grown up in a country that pays lip service to racial progress and the end of segregation, images of Black stars in the movies have been crucial to my development. They gave me a sense I could also be smart and sexy, stylish and tough, courageous and complicated. Even if the films weren’t great, there were always moments that confirmed my humanity and situated my Black self in a larger world. I have been blessed to be in a position where I can now create some of those moments for the generations to come. It is a responsibility; it is also an honour.

React to The Review:
We believe a powerful film or work of art — or, uh, email newsletter — should generate a reaction. Got something to say? Send us a letter.