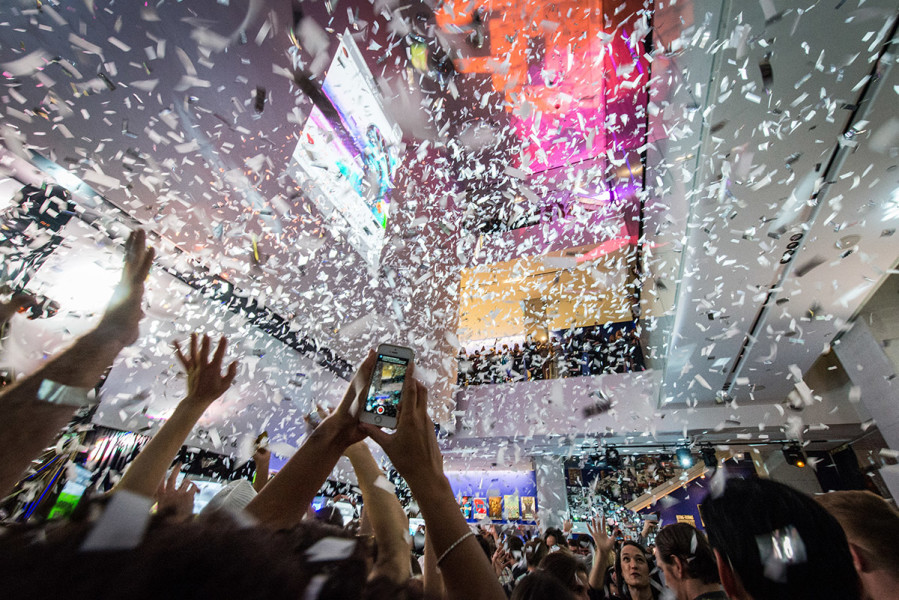 Here’s what to expect from TIFF’s annual fundraising event Boombox, which showcases emerging artists and exciting performances on a packed dance floor

__Share your love for your city by attending TIFF Boombox on November 2. Tickets are available now at tiff.net/boombox. __

Five and a half years ago, Paula Whitmore, Senior Manager of Advancement Sales and Events at TIFF, decided to create a party that would help the organization engage its audience beyond the Festival in September. While TIFF certainly had experience in the art of throwing a glitzy party, they didn’t yet have a standalone fundraiser, one to which anyone could buy a ticket and provide philanthropic support for the organization in its official home at TIFF Bell Lightbox.

Whitmore says the aim of Boombox is to broaden TIFF’s programming by celebrating film through other art forms with an audience ready to experience something new and exciting. “I wanted to use TIFF as a platform for emerging artists to share their unique talents and for people in Toronto to engage with what they're doing,” says Whitmore.

This type of high-profile, high-concept cultural fundraiser has become a mainstay in Toronto’s (sometimes broken) social scene. While events like AGO’s Massive Party and The Power Plant’s Power Ball allow Parkdale artists, Bay Street financiers, and Rosedale socialites to rub shoulders, they can sometimes feel intimidatingly exclusive. When envisioning what TIFF could bring to the experience, Whitmore looked to the city’s multiculturalism as a way to reconceive what a Toronto party should look and feel like.

“In Toronto, you see very diverse perspectives from neighbourhood to neighbourhood,” says Whitmore. “We benefit from seeing, hearing, and learning from these communities because it opens our minds to so many great possibilities and spurs on new creativity. This was a year of celebration for Canada 150, but it was also an important year of reflection on some of the missteps in our history, so we don’t make the same mistakes again. By questioning what it means to be Canadian, it was important for me to say: ‘This country is really great, we are fortunate to have the freedoms and liberties that we do, but I am inspired more by our future than I am by our past. We have so much to look forward to!”

“And so I wanted Boombox to highlight artists who are doing great, creative things in Toronto who might be first-generation Canadian, or have an experience outside of what some may think as traditionally Canadian.” To that end, some of Boombox’s part high-profile participants have included Director X, Kardinal Offishall, and Maylee Todd.

This year’s edition brings visual artists, filmmakers, dancers, DJs, and performers together to celebrate TIFF’s fall film programming. Drawing inspiration from the 1980s film and television series Fame, TIFF Bell Lightbox will be transformed into a school of the arts. Boombox will engage with multiple aspects, including fall series on Black stars, the Filipino New Wave, and work by Indigenous filmmakers. Proceeds will go towards the Share Her Journey campaign to increase participation, skills, and opportunities for women in film.

Whitmore emphasizes that this year’s edition of Boombox is “not just a cocktail party in a pretty space” but a full building takeover, with performances, music, bars, and art installations in secret spaces on every floor. The eclectic mix of programming includes everything from an impromptu rap battle to live painting to VR. Artists Angel Crystal Recollet, Cylene Morrison, Jonathan Yellowhead and Leslie McCu offer a powwow dance showcase, while a performance by dancer, choreographer, and DJ Diana Reyes (better known as Fly Lady Di) fuses traditional Filipino culture with modern hip-hop influences through music and dance in her project Dance Studio. Alexander Junior of the Filipino music duo DATU provides a soundtrack of Filipino disco as the dancers from the troupe HATAW show us the moves. Playing off the arts-high school vibe, guests have a chance to win a prize if they receive a passing grade on their “report card,” which can be completed by visiting every part of the building over the course of the night. 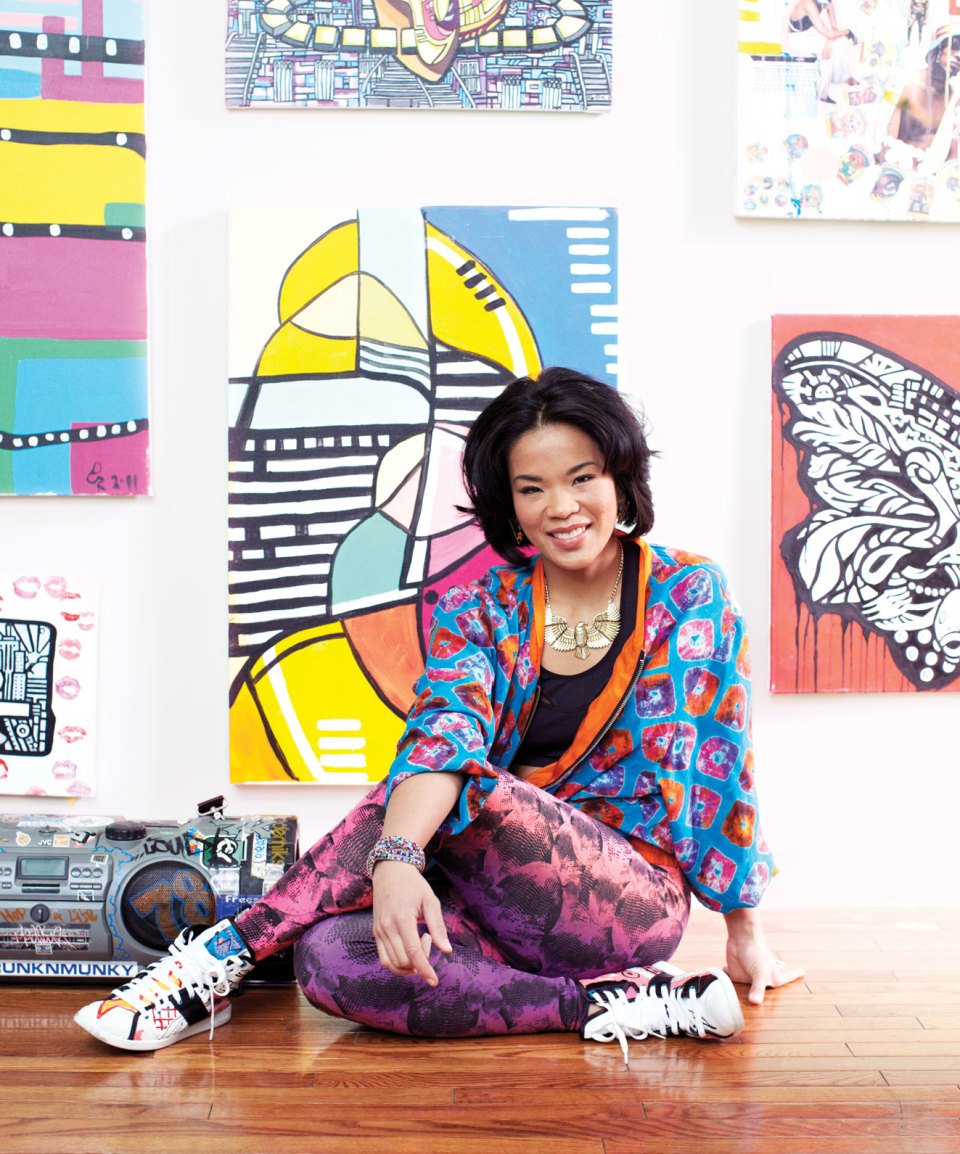 For Reyes, the chance to create a project for Boombox is “one of the most exciting things that's ever happened to me as an artist.”

“I feel totally and completely empowered,” says Reyes. “My whole goal as an artist is to bring light to the things I feel are underrecognized, so the fact that I get to hire people who deserve exposure at these sorts of events is huge,” she says. “It makes me really happy to know we have a home with TIFF, because there's been so many times as a person of colour — even in Toronto where I'm born and raised — where I feel like I don’t belong.”

Young filmmaker Raha Euphoria agrees. Determined to make music videos, she worked her way up the ranks from production assistant to become a director and producer in her own right, under the mentorship of past Boombox participant Director X.

“Two years ago, I got the opportunity to become the art director for Director X for his Fifteen Seconds of Fame installation at Boombox,” says Euphoria. “Directing is my passion, and Boombox opened a door for me when opportunities for young creators weren’t so readily available. It really does allow young artists to connect to a huge audience in a way that's genuine and very special.” 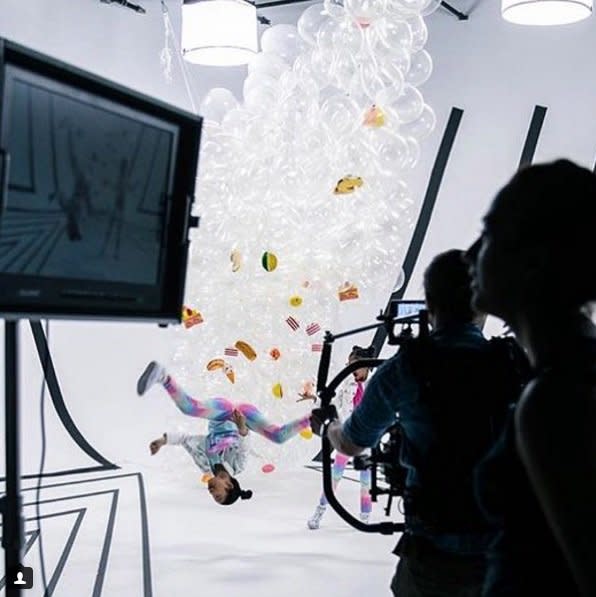 This year, she returns to Boombox with an installation of her own. Euphoria’s immersive project Step into the Video will recreate a music-video shoot in real life, employing aspects of 3D mapping, projection, and live performance, blurring the lines between what the audience sees on screen and the chaotic atmosphere of being on set.

The artist always looks forward to Boombox as a chance to meet fellow creators, see inspiring work, and party hard. “The party is so much fun, and some of my fondest memories are on the dance floor,” says Euphoria. “It has that Toronto love, that multicultural thing where everybody's accepting of each other, which is especially important when we have this reputation as the screwface capital of the world.”

Unlike traditional charity fundraisers, Whitmore says the goal of Boombox is to take party-goers outside their comfort zone with theatrical, immersive experiences that leave a lasting impression.

“We try to push the envelope a little bit and make our guests feel something they wouldn’t normally feel, either by creating a performance that some may find a bit strange or uncomfortable, or by taking them to unusual spaces inside the building, including the loading dock,” says Whitmore.

“In 2014, for the Stanley Kubrick edition, [the artist] Kaitlyn Regehr did an immersive dance performance [featuring nude dancers] in Luma around Eyes Wide Shut. Guests paid an extra fee to go into a performance that was not meant to be titillating but expose the depraved, greedy, and morally depressed side of the human power structure as it exists today. Even Jan Harlan (Executive Producer for Eyes Wide Shut) and Christiane Kubrick (Kubrick's widow) said it hit the mark.” 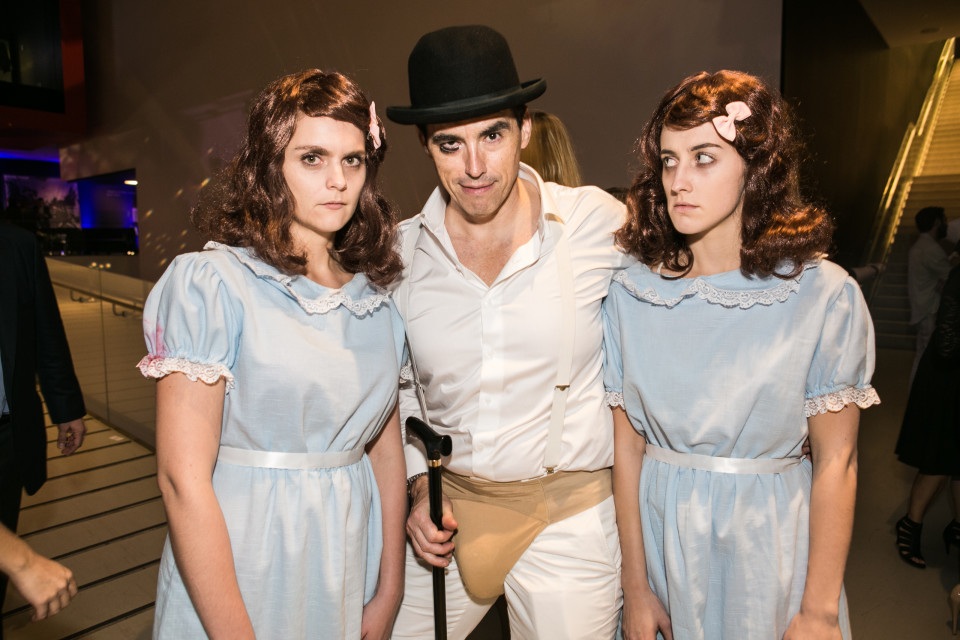 A pair of twins from The Shining and a droog from A Clockwork Orange from Boombox's Stanley Kubrick-themed party in 2014.

Boombox offers an alternative to stodgy black-tie charity balls; it’s a party that benefits both its attendees and the young creators they’re raising funds for. Its commitment to diversity also showcases the Toronto we want to live in — what filmmaker Clement Virgo described in a TIFF interview as “the city I see on the subway on my way to work in the morning.”

Says Reyes, “The diversity of Toronto is something I hold dear to my soul, so Boombox is a magical land. I love places where you enter into another world and feel completely engulfed by them.”