__Stranger Things returns to Netflix on October 27 and to get you primed, we've unearthed two pieces of ST content from the vault. This Q&A with the show's star Finn Wolfhard, who plays Mike Wheeler on the show, was originally conducted in July 2016, the week the first season premiered, as part of TIFF's Hitchcock/Truffaut programming. (To read an essay on the show's powerful female heroines by Soraya Roberts, head here.) This October 26, members can catch a sneak preview of the second season of Stranger Things at TIFF Bell Lightbox. A rush-line policy is in effect. __

François Truffaut’s heartbreaking classic The 400 Blows follows 14-year-old Antoine Doinel (played by 14-year-old Jean-Pierre Léaud) as he goes from misunderstood kid to truant to petty thief to runaway, mirroring the director's own misspent youth. While it is routinely celebrated as one of the greatest coming-of-age films of all time, I wanted to see what an actual 14-year-old had to say about it, so I interviewed my friend Finn Wolfhard, who plays Mike Wheeler in the Netflix series Stranger Things and is a budding cinephile and emerging director in his own right. (I made him shoot a cop in a music video I co-directed for the Toronto punk band PUP, and we've been buds ever since.)

Finn and I spoke in the summer of 2016 at the Queen Mother Cafe, where he ate pad thai for breakfast, while offering his thoughts on the French New Wave masterpiece and how any kid could relate to Antoine Doinel today.

What did you think The 400 Blows was about?

It’s like a rebel story, I guess. It’s like this kid was really misunderstood by everyone and no one gives him a chance. That’s the whole thing. No one gives him any chances. No one believes in him. So he asks, “What’s the point?” and that’s why he does all these terrible things.

That made me so sad.

It’s so sad. The parents are like, “I don’t want you anymore.” And apparently, that’s happened to Truffaut. I read that in a review. That’s how he grew up... It’s hard to grow up with people, your family, who just don’t believe in you. I think that scars you for life.

I thought it was the most depressing movie, but it was one of those ones that you want to keep watching. Like, it’s so hard to watch this kid get constantly screwed over by everyone, but then you just want to see how the kid grows up. And I think, at first, it sucked. There’s that part with the whole Balzac thing where he’s like, “Eureka! I found it.” And he starts writing, and you think it’s an original but he completely plagiarized it, you find out. You think he’s growing, but it ends up being a lie.

What did you relate to in the movie?

The school stuff I really related to. Back in elementary school, all the kids messing around, but then how his teacher absolutely hates him and he keeps getting thrown around. Elementary school was a lot like that for me. That scene where they go to recess and everyone is fighting was exactly like my school. And his friendship was so cool. [Remi] is the only kid that does believe in him and does want to hang out with him. It sucked because he tried to visit him in the end and he couldn’t get in. So he just moved on and you never see him again. 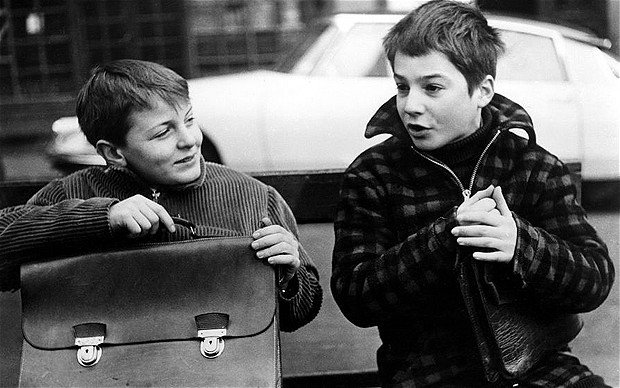 I read that character was based on Truffaut’s real-life childhood friend [Robert Lacheney]. And then later on, that same guy helped him make a bunch of his movies. Do you think any kid could relate to this film?

If you watch it, if any kid watches it... it’ll definitely be relatable to them. Because you’re watching everything in your childhood. But as someone’s life. There’s no good. Everything bad: getting hit, getting caught, getting bullied, getting in trouble, stealing.

There’s no joy. Except when he skips school. And when his parents take him to the movies. That was really sweet. I thought, “Hey! Everything is going well! I hope that this is getting good now!” Because after the movie, he did that Balzac thing, and I was like, “Oh this is an underdog story! Now he’s getting good at writing.” Then, 20 minutes later, he runs away again and I was like, “Oh no, this is bad.” There’s no good in the movie anymore.

What was really hard to watch?

I mean at first, he gets slapped in front of his class. Which is really heartbreaking to see. Then his dad is like, “We don’t know what to do with him, we’re not gonna help him.” This kid probably has A.D.D., he’s very unmotivated, unfocused. He doesn’t know what he’s going to do, and his parents won’t help him. They just hope for the best and they don’t really do anything. To see them just give up and put the kid in jail, there’s that scene when he’s literally in jail with prostitutes and a guy. I don’t know what he did. [Antoine] asks him, “Well, what did you do?” and he goes, “You know!” and we never find out. And then from there he goes to that military school and makes a break for it.

When he’s in the back of the police truck and he’s holding the bars and he passes the movie theatre that he went to with his parents. And then just that one tear that falls, and I thought, “Oh man, that sucks!” Or, the part with the mom. I found that really cringey because the mom is obviously bullshitting him, she knows he saw her cheating on his dad. So she’s like buttering him up with, “I remember when I was your age! We’ll go to the movies and now we’ll be nice to you.”

What about the scene at the end where he talks to the psychologist? Something about his delivery of his life story made me so sad because he’s just so cool about it. So matter-of-fact.

That was my favourite scene in the whole movie. He opens up. You never saw that from the character. Finally, he opens up to the psychologist and you hear of all this pain that he’s gone through. He finally relates to someone in that sense. It probably made him feel very comfortable. He’s just like “This is my life, this is what’s happening. I can’t go back to my family, so I’m telling you this.” So, I guess he knows he’s screwed.

What did you think of Jean-Pierre Léaud’s performance?

I thought he was amazing! Have you seen his original audition on YouTube? He didn’t read any lines. He just talked. Truffaut asked him a million questions, he’s like, “Are you cheeky, or joyful?” and Léaud says, “I’m cheeky” and it’s just this... it’s very similar to his character. He’s still acting, you know. I guess acting in childhood really affects your adulthood. I learned that the mother in the movie is also still acting. Although, the last thing she was in was in 2015. But she was in Amélie. All those movies. But yeah, I thought they all did amazing jobs.

Did you like the way the movie was shot?

That was the coolest way I’ve ever seen a movie shot in my life! It was so confident. I can tell from all the shots because there’s that scene at the end where he just runs, and he runs for like a minute and a half and there’s no stopping. He just runs and it’s one shot and it’s tracking him and I was thinking like “How do they do that at that time?”

I was thinking about that too!

Were they on a cart? Yeah, the shots were very cool. Very confident in themselves.

I know you like Wes Anderson. Did you see any similarities between The 400 Blows and his movies?

I definitely saw a lot of Wes Anderson in that. Those long, drawn-out, wide shots... and the moving camera. It’s the same kind of acting style, too. It’s like, really weird and awkward. I was just watching Moonrise Kingdom and the acting is just so awesome, but it’s so awkward at the same time. They always have this weird way of knowing it’s a Wes Anderson film. Instead of paying attention to the world around them, they just pay attention to their own lives. I guess Moonrise Kingdom is a lot of the same story. Sam is a lot like Antoine, and I think it relates.

From this movie, what is your impression of Truffaut as a filmmaker? Did you get a sense of what his whole deal is?

I think it’s just painfully real. It’s just like, “This is what I’m doing, like it or not, it’s going to be realistic.” And I love it. It was a confident movie. Truffaut, from what I saw, makes such freeing and real movies.

Do you think there’s something from the movie that you’ll take for your own ideas about making films or acting?

I was thinking about the confidence. There’s a lot of confidence in those shots. So, I think just like you said before, trusting your gut and trusting your shots, I guess, and just going with it. It was very cool. I’d love to make or act in a rebel story.

What do you think the ending of the film means?

I really liked the ending. I thought it was depressing because you know something bad is going to happen after. You know he’s going to get caught. But you’re happy for him at the same time because I remember what he said to his best friend, “I want to join the navy and I’ve never seen the ocean before.” So he runs, and finally he goes into the ocean. It’s one of those things where it’s like, he’s free.

Yeah, but then there’s the freeze frame, though.

Yeah, then it freeze-frames, so you don’t know what happens after that. But I was happy to know that there were follow-ups. I was like, “There’s so much more to the character!” I’m so happy he finds true love. I think The 400 Blows is a very inspirational type of film.

The Powerful Women of *Stranger Things*