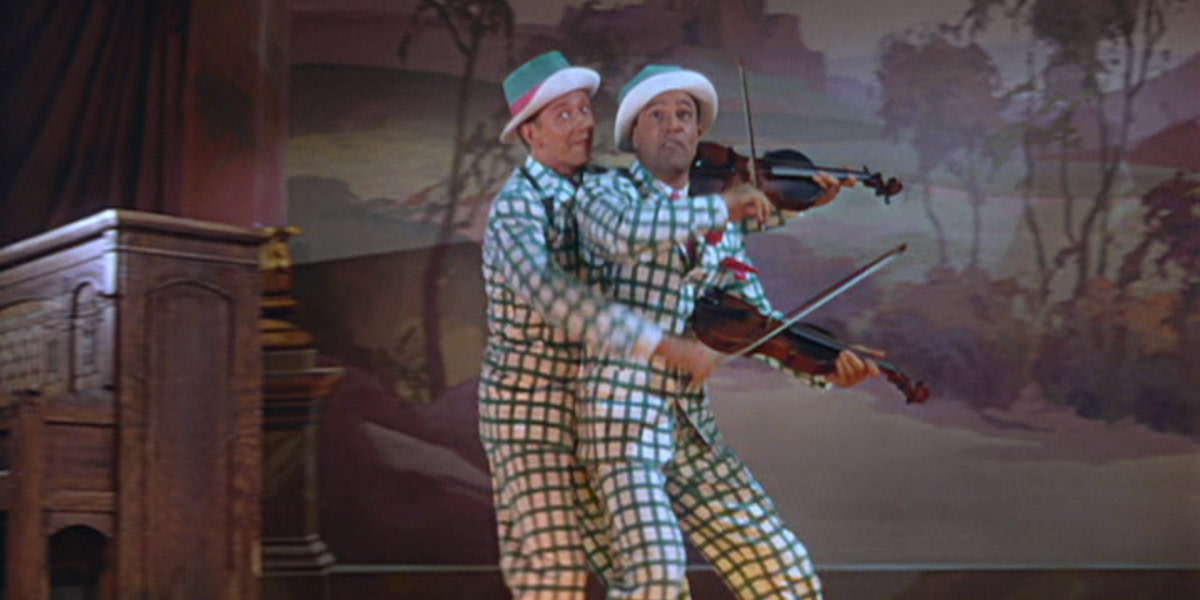 Singin' In The Rain's Second Fiddle

In a movie of pure joy, Donald O'Connor's performance is the best part

What are your feelings on pure joy? TIFF Bell Lightbox screens a 35mm print of the classic movie musical Singin' In The Rain on Sunday, August 14.

I was eight years old the first time I saw Singin’ In The Rain. Five minutes into the movie, I fell in love with Cosmo Brown.

There’s this scene at the very beginning of the film where A-list silent movie star Don Lockwood (Gene Kelly) is standing on the red carpet, explaining his origin story to a throng of adoring fans. He talks about how his parents brought him up on classical theatre, trained him at the conservatory of fine arts and showed him off to their high-class society friends. With a far-off twinkle in his eye, he invokes his lifelong motto: “Dignity. Always dignity.” Meanwhile, a childhood montage reveals a different story: Don and his best friend Cosmo (Donald O’Connor) as children, hoofing it in pool halls while patrons pelt them with pennies; sneaking into the movies to see a B-list King Kong knockoff called The Dangers of Drucilla; pratfalling and spraying each other with water on a creaky vaudeville stage; and finally, touring America’s shittiest towns with their double act, getting yanked off stages in places like “Oatmeal, Nebraska” and “Dead Man’s Fang, AZ.”

This montage is the first place where the film’s uniquely pure magic kicks in. Together, in matching plaid suits, Don and Cosmo do a routine to a song called “Fit As A Fiddle.” And although O’Connor and Kelly are supposed to be playing second-rate vaudeville hacks, the dance they do is perfect, as giddily joyful as it is technically sharp.

Gene Kelly is great in this scene, the same way he’s great in everything; even when he’s carrying O’Connor around on his back, he moves like the laws of gravity don’t apply to him. But even now, watching it for probably the hundredth time in my life, it’s not Kelly that I’m drawn to, but O’Connor. There’s just something about the way he moves: light as a breeze, bright as pure sunshine, electric as a live wire. He looks magnetic. He looks free. He looks happy. (He also looks like nearly every man I’ve ever had a crush on in my life. If the O’Connor estate ever wanted to do some quick charity work, they might consider sending me some money for therapy.) 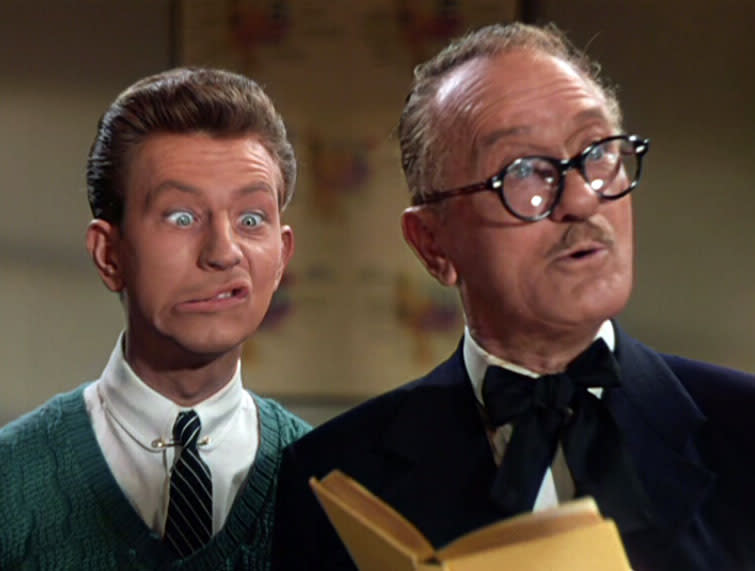 There are plenty of films about show business, but Singin’ In The Rain is unique in the way it spins Hollywood artifice into unfettered joy. Done right, these movies about making a movie let their writers, actors and audience all have their cake and eat it too: everyone gets to enjoy a shot of pure entertainment, plus the slightly smarter sense of self-awareness that comes of holding yourself at arm’s length from your subject.

Take the scene where Don sings “You Were Meant For Me” to Kathy Selden (Debbie Reynolds) on a soundstage. He gets her to stand on a ladder in front of a fake sunset, dress blowing in the breeze from an industrial fan, and then does his big serious romantic number, all puppy-dog eyes and slow gestures. As someone who likes movie musicals, but often finds their sappiest moments a little embarrassing to watch, this scene gives me the wonderful feeling of being both played and played to at the same time. I’m allowed to indulge in the fantasy without having to force myself to ignore the artifice that underlies it. You get the satisfaction of watching a scene that gestures toward being smarter than its genre, but the pleasure of seeing a moment that embodies it perfectly. By completely epitomizing the same starry-eyed Hollywood fantasies that it’s smart enough not to fall for, Singin’ In The Rain pulls off the impossible trick of being wonderfully naïve and uncommonly smart at the same time.

Some of Singin’ In The Rain’s meta-entertainments are better than others. I could watch the famous preview scene all day, for example, but couldn’t tell you the last time I made it all the way through that weird montage with all the costumes. But overall, the film makes more out of its onstage/backstage dynamics than any other in the genre. Pretty much everyone and everything in the movie is, in some way, a fake: Don gets his start on vaudeville stages and B-movie backlots, then reinvents himself as a Serious Actor once he hits the big-time. Kathy is a chorus girl who gets away with pretending to be a fancy stage actor until Don sees her performing in a floor show. And Lina, the film’s antagonist, is a silent movie starlet whose grating voice doesn’t match her gorgeous face. (She’s also of the best female characters in the history of comedy – sexy, smart, sneaky and infinitely quotable.) And all of them exist inside an industry that’s scrambling desperately to keep pace with the tectonic shift from silent films to talkies. Even “The Dueling Cavelier,” the movie within this movie, is built on layers of artifice; after it bombs disasterously at a test screening, the gang turns it into a blockbuster by dubbing Kathy’s beautiful voice over Lina’s unlistenable one.

Nostalgia is a tricky business. In 1952, Singin’ In The Rain was an affectionate wink at a bygone era of the entertainment industry, but by now, it’s an old Hollywood gem in its own right. The behind-the-scenes tales of the film’s production are themselves Singin’ In The Rain-worthy, like the story of how Gene Kelly filmed the title scene with a 103-degree fever, wearing a wool suit that shrank in the rain while he danced; or the fact that Jean Hagen, who played the screechy Lina, actually had a beautiful voice, and actually pre-recorded some of Debbie Reynolds’s parts. (Fun fact: In the scenes where Lina’s supposed to be lip-syncing to Kathy’s voice, what you hear isn’t actually Reynolds but a recording of Hagen. To make things even more complicated, a third singer, Betty Noyes, sang the recording of “Singin’ In The Rain” to which Reynolds the actor and Lina the character both lip-sync in the movie’s final scene.)

Possibly the most famous stories from the film’s production concerned the way Kelly, a notorious taskmaster, treated Reynolds; she was a gymnast with no formal dance training, and he’d make her run routines like “Good Morning” over and over until her feet bled.

The longer you look at Singin' In The Rain, the more the film’s actors start to blur into the characters they play. Gene Kelly, like Don Lockwood, was an A-list leading man with a slightly bloated ego, and Debbie Reynolds, like Kathy Selden, was a 19-year-old ingenue in her first starring role. (Later, her pop-star husband Eddie Fisher would leave her for Elizabeth Taylor, which is crazy for a number of reasons, not the least of which is that, even at his most handsome, he looked like a marionette brought to life by an evil wizard.)

All that said, none of the film’s actors fit quite as perfectly into their roles as Donald O’Connor did. The real-life child of a circus strongman and a bareback horse-rider, he started performing at a young age. His childhood was marked by trauma and tragedy – including the death of his father and two of his siblings – but he weathered it with the kind of show-must-go-on attitude of which Hollywood legends are made. (One account of O’Connor’s childhood tells the story of him breaking his finger during a stage entrance. Instead of bailing out of the scene, he yelled at the pianist to “vamp! vamp!” so he could free himself and continue acting.)

Though O’Connor worked a lot in the ‘40s and ‘50s, there’s a good chance you’ve only ever seen him in Singin’ In the Rain. (Nobody’s really rebooting Jivin’ Jacks and Jills or screening the Francis The Talking Mule franchise these days.) While there’s a good chance you will never see, say, Are You With It?, Call me Madam or I Love Melvin, if you enjoy light, life, or pure joy, you owe it to yourself to watch his best scenes from those movies. O’Connor turns calculus into dance, drunkenly smashes a chair and pops a bunch of balloons and swings around a gazebo on rollerskates as easily as if he were out for an afternoon stroll. He comes at all of these routines with the same kind of seriousness that made him famous in Singin’ In The Rain: impossibly effortless on the surface, but near-manically focused underneath.

My favourite scene in Singin’ In The Rain isn’t the one O’Connor’s best-known for. While most people will tell you “Make ‘Em Laugh” is his best work, I personally stan for “Moses Supposes.” I love the weird face-acting he does when he’s joshing their clueless vocal coach, I love where they pile all the stuff in the room on top of the poor guy, and I love O’Connor’s sweater. But most of all, I love watching him dance next to Kelly, because it’s an object lesson in the raw, undeniable power of pure enthusiasm.

Kelly is, of course, a perfect dancer – every gesture is silky smooth, and each time he jumps, he seems to hang in the air for an impossible extra millisecond. Yet, next to his partner, he might as well be dancing in slow-motion. There’s a flash in O’Connor’s eyes and a charge in the way he moves that just feels so genuinely, unequivocally joyful. He embodies effortless charm so naturally that Kelly, by comparison, looks as embarrassingly overperformative as an amateur figure skater.

O’Connor’s most famous scene - of the film and his career - is “Make ‘Em Laugh,” and with good reason. It’s two minutes of pure, full-body, class-clown joy, delivered with a level of abandon I’ve never quite seen anywhere else. His athleticism, his timing, the sense of seemingly carelessness with which he tosses himself around the set and the precision that actually underlies every single movement are all parts of what makes the routine so great. But like all good magic tricks, the delight of “Make ‘Em Laugh” transcends the series of gestures that comprise it.

I’ve always felt like, despite how delightful as it is to watch, there’s also something a little raw about “Make ‘Em Laugh” – something almost uncanny. According to Kelly, O’Connor improvised the whole thing on his own, spending a full day throwing himself into walls and onto the studio’s concrete floors, trying to gage what got the biggest reaction. Between the fact that he ended up covered in bruises and the fact that he smoked four packs a day, O’Connor had to be sent home for bedrest by the time they finished shooting the scene. When he returned to set, the cast and crew gave him a round of applause before delivering the news that, thanks to a camera error, they had to reshoot the entire sequence. “Things were building to such a crescendo,” he purportedly said of shooting the scene, “that I thought I’d have to commit suicide for the ending.” Instead, he just launched himself through a wall.

Maybe this is what gives “Make ‘Em Laugh” its extra dimension – the thing that makes it funnier and a little more real than any other part of Singin’ In the Rain. It’s the point in the film where O’Connor and his character seem to disappear completely into each other, both of them literally throwing themselves through the walls. In a movie that’s all about artifice and fiction, “Make ‘Em Laugh” is the point where real-life fact and movie magic align completely, until you can’t tell one from the other.