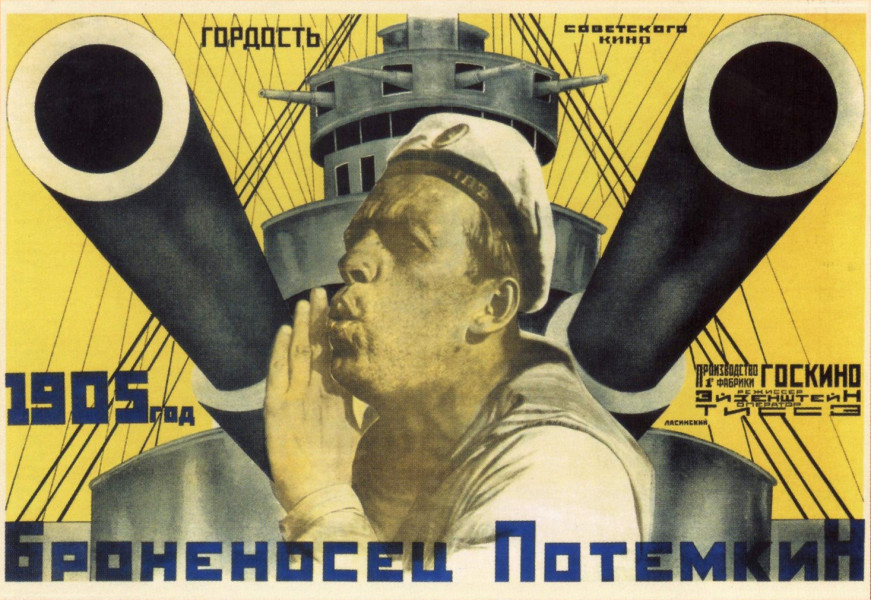 Some of the most enduring images in film history never ran through a projector, but began life as elements of promotional campaigns, and — thanks to nostalgia, notoriety, or sometimes just pure ubiquity — became iconic in their own right. Our ongoing series FilmArt looks at the advertising, posters, lobby cards and other ephemera that complement and enrich the filmgoing experience. 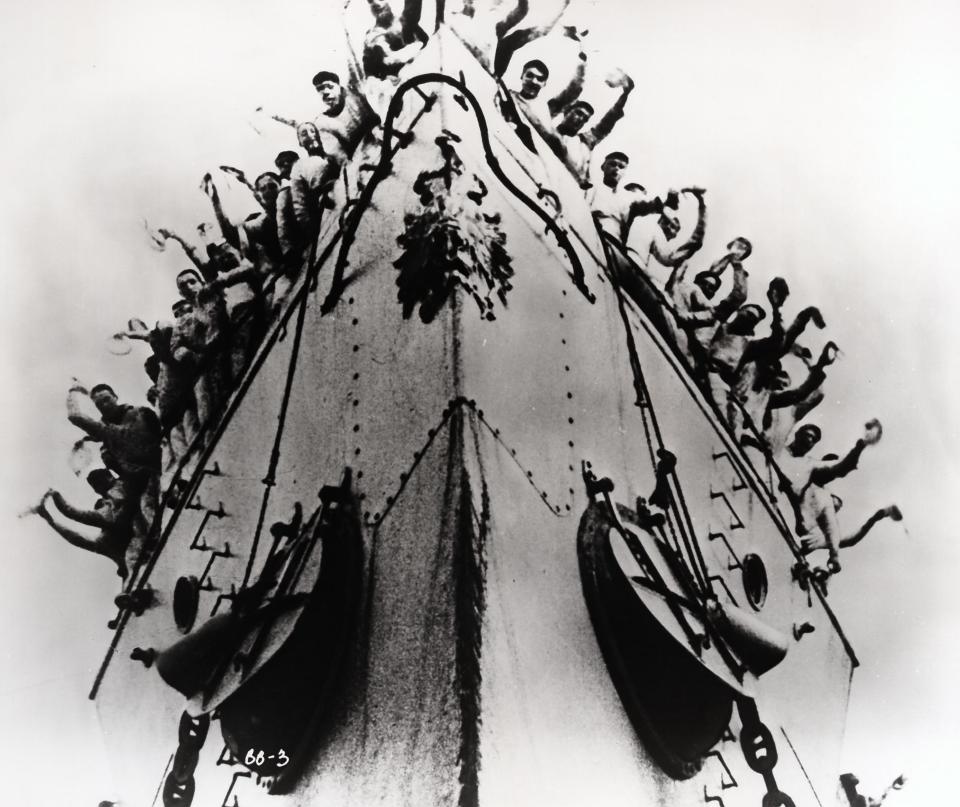 Roger Ebert declared that Sergei Eisenstein’s Battleship Potemkin (screening as part of our major TIFF Cinematheque retrospective of Soviet silent cinema) “[has] been so famous for so long that it is almost impossible to come to it with a fresh eye” — a claim with which many of the artists and designers charged with promoting the film over the past 90 years would beg to differ. Given the film's many re-releases and reinventions over the decades, there is no shortage of Potemkin posters, each offering new entry points into the film for new audiences. The below is by no means a comprehensive overview; throughout the years many more great artists have taken on Potemkin than those represented here, and doubtless more will in years to come.

Given the film’s double life as both art and agitprop, it’s only fitting that three of the key figures in the Russian Constructivist movement — Alexander Rodchenko, Anton Lavinsky, and the Stenberg Brothers — produced materials for the film. Though this early Soviet aesthetic is perhaps overly familiar to us nowadays, it cannot be overstated that at the time, these posters were as revolutionary as the film they advertised; by comparison, British and North American posters of the era were dominated by realist paintings of a film’s stars, and bore the distinct flourishes of the artist’s hand (especially in text, a practice that would last long into the 1950s).

Thanks to its resurrection by Kino Lorber as the key art for the company’s 2005 reconstruction of the film, Lavinsky’s poster from the 1926 Russian release (seen at the top of this article) is probably now regarded as the definitive poster for Potemkin. Like many of the Potemkin posters to come, this poster adopts one of the most obvious visual motifs from Eisenstein’s film: the use of diagonal compositions to imbue images with maximum dynamic force. 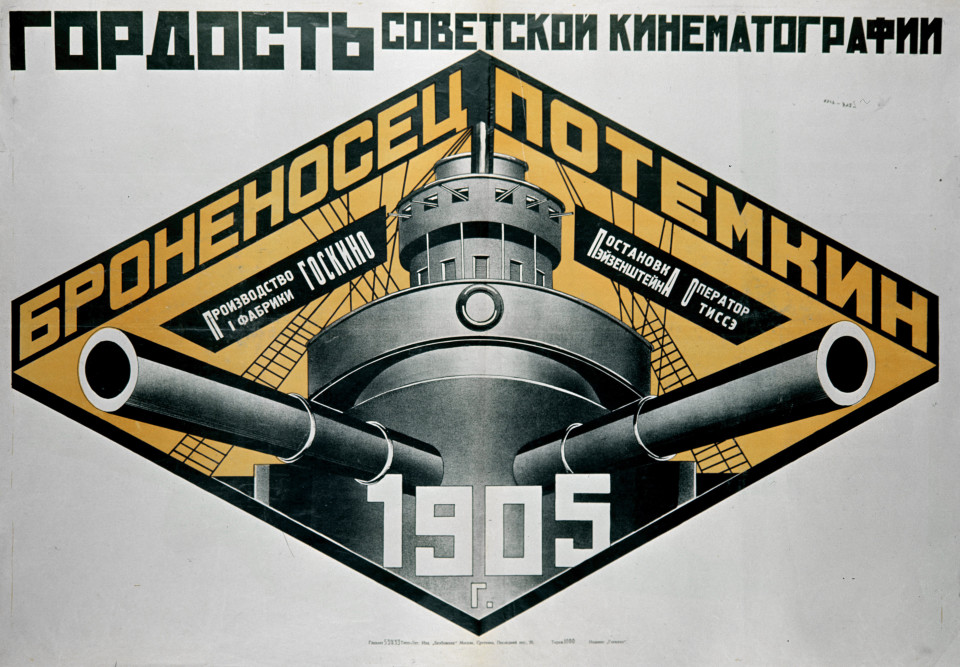 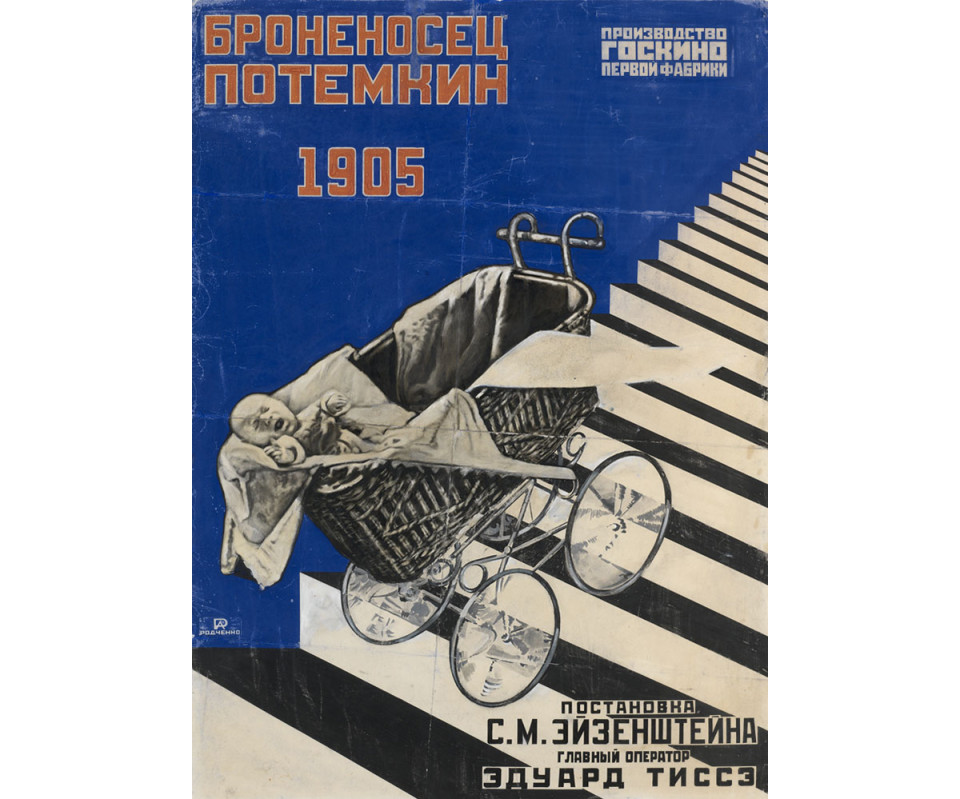 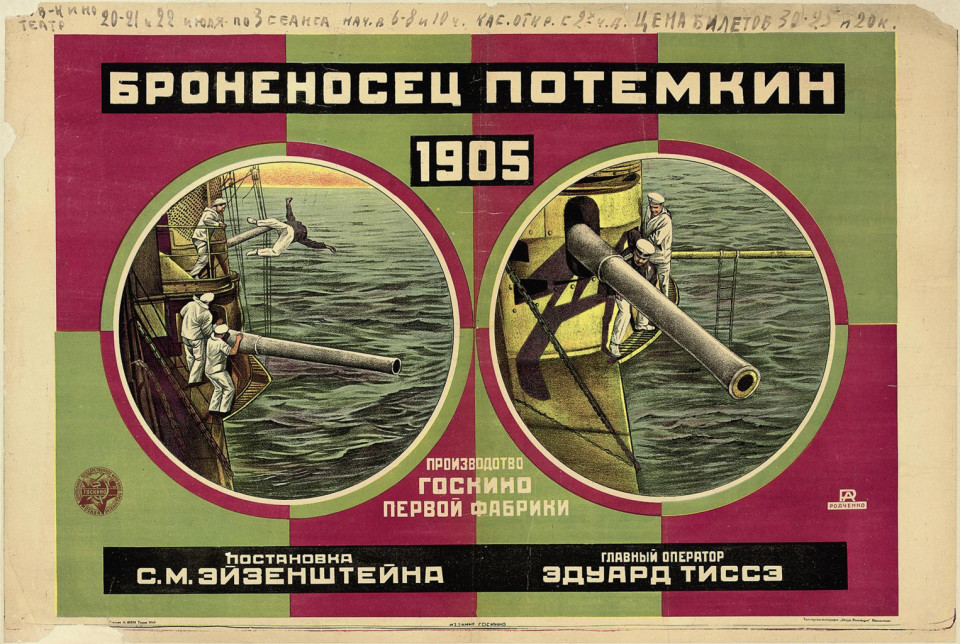 Alexander Rodchenko produced at least three posters for the film during its initial release in 1926 and 1927. Probably the most influential figure of the Constructivist movement, Rodchenko was a painter and sculptor whose commitment to the Russian Revolution led him to abandon fine art to focus on designing advertisements, book covers, and posters in the service of the state. Though Rodchenko is best remembered for his pioneering use of photomontage (as best represented in his most famous poster, Books), each of his posters for Potemkin is anchored in illustration. 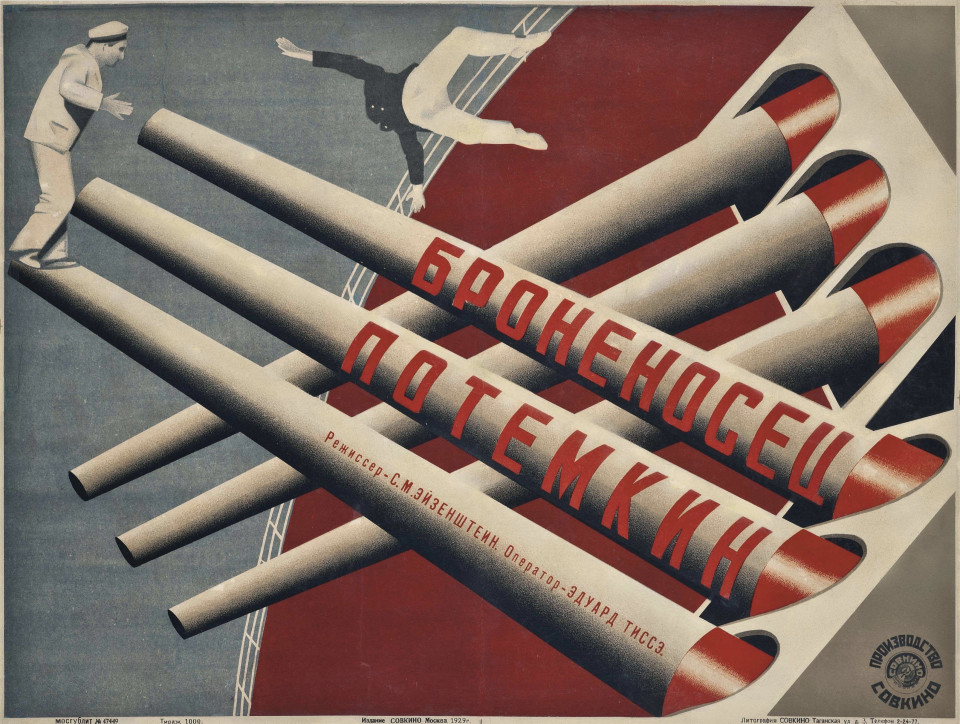 This 1929 reissue poster by Vladimir and Georgii Stenberg, two of Soviet Russia’s most prolific and innovative designers of film posters, utilizes the same incident from the film as does Rodchenko’s diptych above: the mutineers casting their abusive officers overboard.

Due to their dual importance to both political and film history, all of these original Russian posters have become highly valued pieces of art. A lithograph of the Stenberg poster sold at auction in 2012 for the astounding sum of £103,250; the Rodchenko and Lavinsky pieces have also recently fetched tens of thousands. 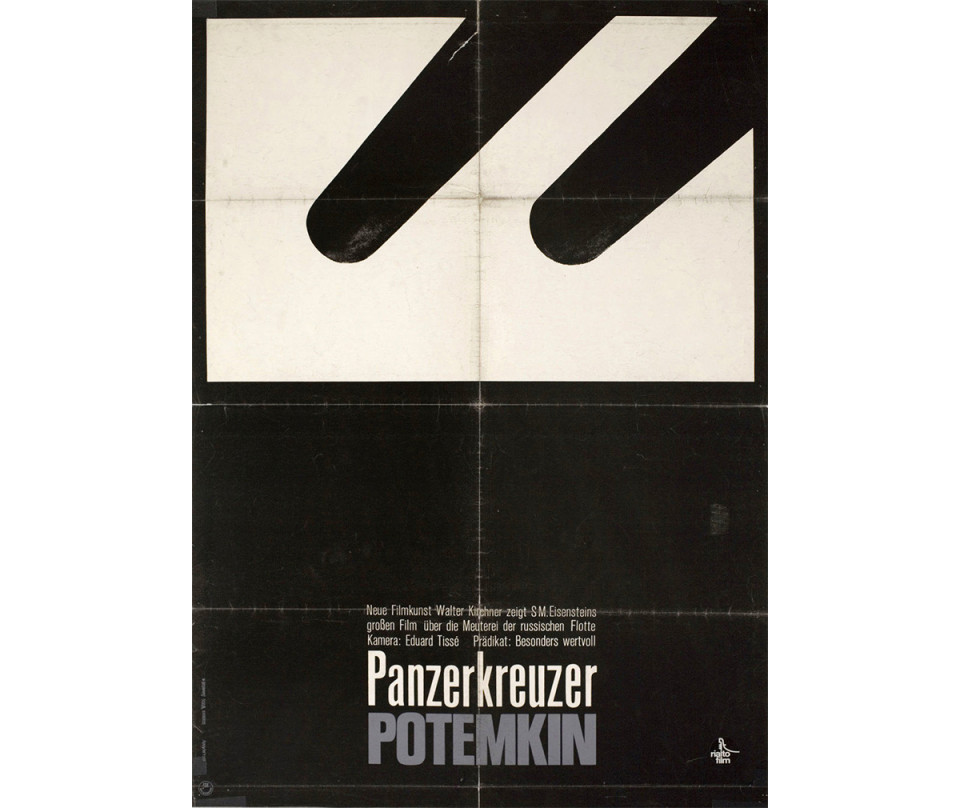 As Potemkin made its way around the world, several giants from the international world of poster design put their own stamp on the film, including this Spartan design by German designer Hans Hillmann. A master of visual concision and one of the most important modernist poster designers, Hillmann produced over 130 film posters between 1953 and 1974, including staggering pieces for Andrzej Wajda’s Ashes and Diamonds, Robert Bresson’s Pickpocket, and Louis Malle’s The Fire Within. 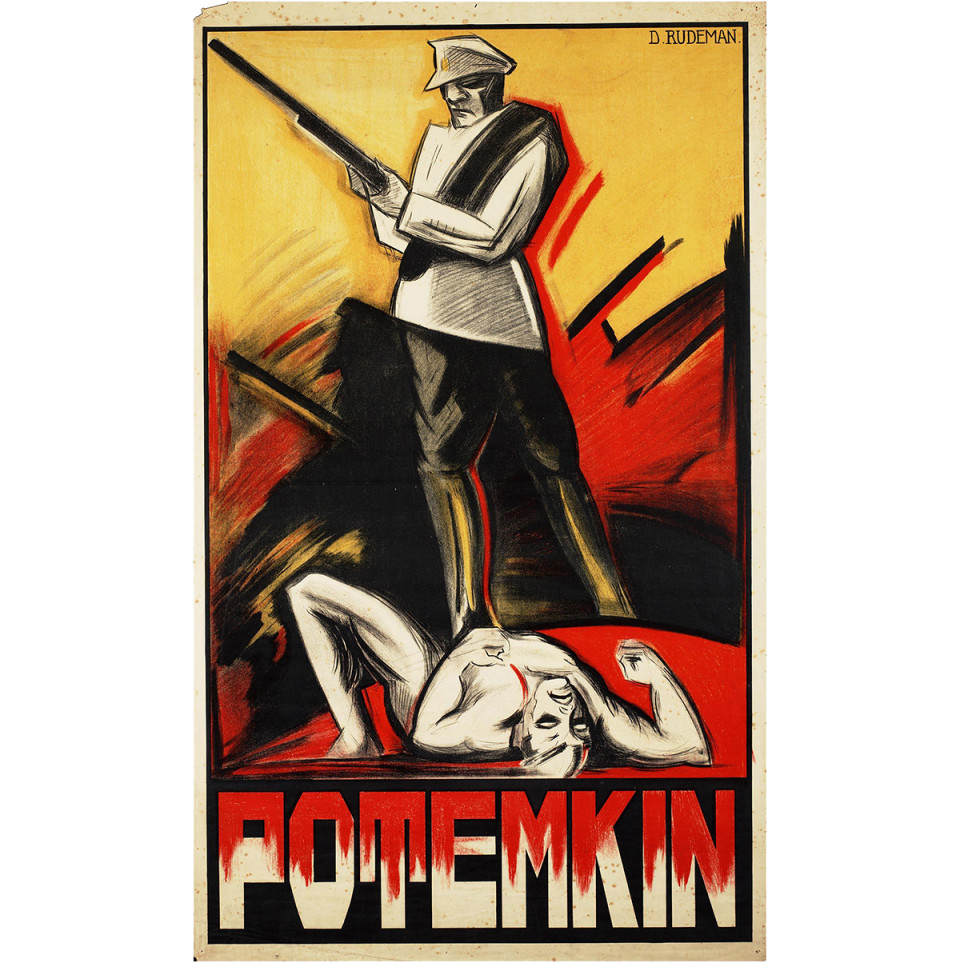 This poster by Dutch artist Dolly Rudeman was produced in 1926, making it one of the first international posters for the film. Rudeman was the only female designer of film posters in the Netherlands in the 1920s, and her work for Potemkin kickstarted her career. (Though most of her work has been lost, 120 of Rudeman’s film posters have been preserved by the ReclameArsenaal foundation in Amsterdam, a handful of which can be seen in a virtual exhibit on her work.)

Considering the crucial role cinema played in post-revolution Cuba, it's hardly surprising to find a Cuban Potemkin poster from as early as 1961. Since 1959, the Cuban Institute of Film Art and Industry (ICAIC) has been creating small-run, visually inventive posters for films shown on the island (a beautiful primer on the subject can be found in Carole Goodman and Claudio Sotolongo’s Soy Cuba: Cuban Cinema Posters from After the Revolution). Immortalized in Susan Sontag's essay “Posters: Advertisement, Art, Political Artifact, Commodity,” ICAIC posters can be found in the permanent collections of institutions like the Victoria & Albert Museum, MoMA, and TIFF's Film Reference Library (which has a special collection of almost 300 ICAIC posters). 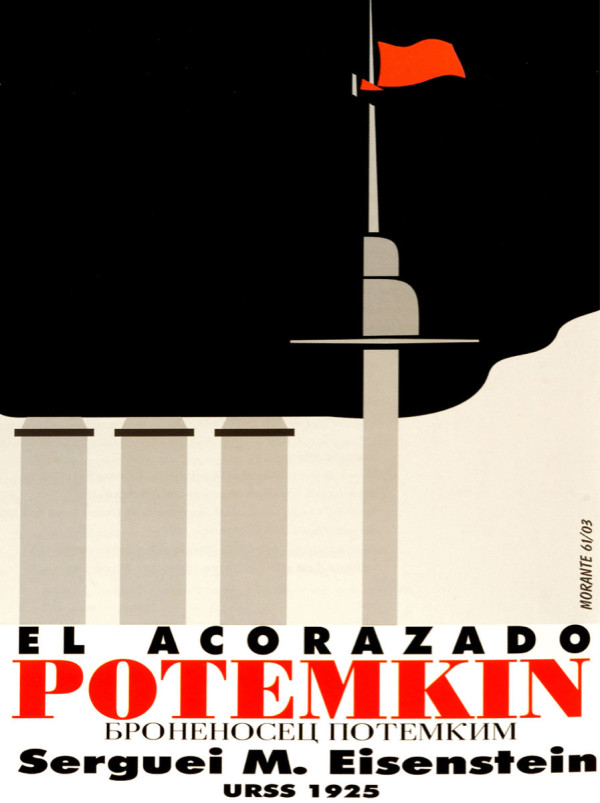 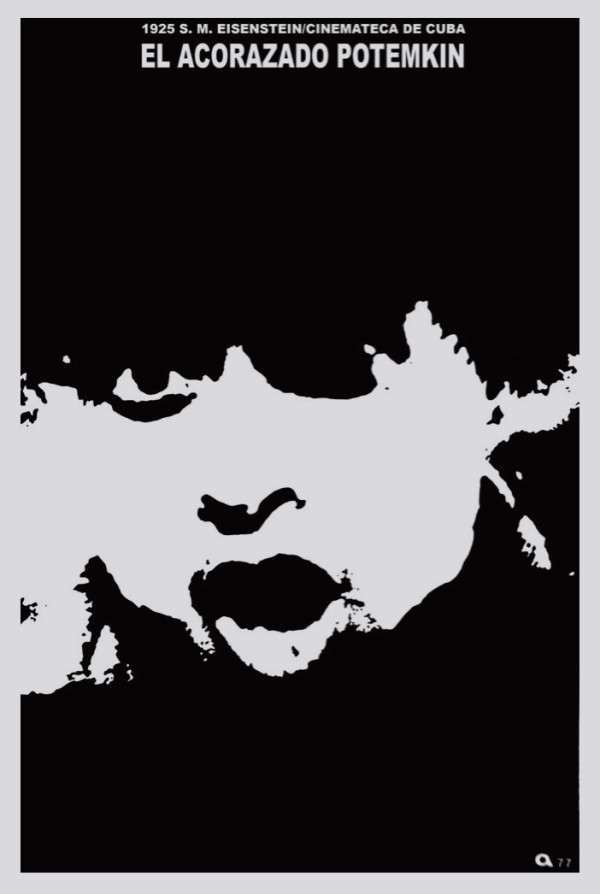 Cutting against the grain of those qualities which are typically appreciated in Cuban posters — highly conceptually, handcrafted works that are often the antithesis of their North American counterparts — this 1961 piece by Rafael Morante (above) is quite representative, at least by Cuban standards. By contrast, René Azcuy’s 1977 design is more in line with general perceptions of what a Cuban poster is and should be — perhaps because Azcuy produced some of the most globally exhibited ICAIC posters, notably his silkscreen for François Truffaut's Stolen Kisses).

Though Polish film posters are popularly (and deservedly) celebrated for their fabulous weirdness, the two posters for Potemkin below are actually quite straightforward, harking back to an earlier, more representative era in Polish design. 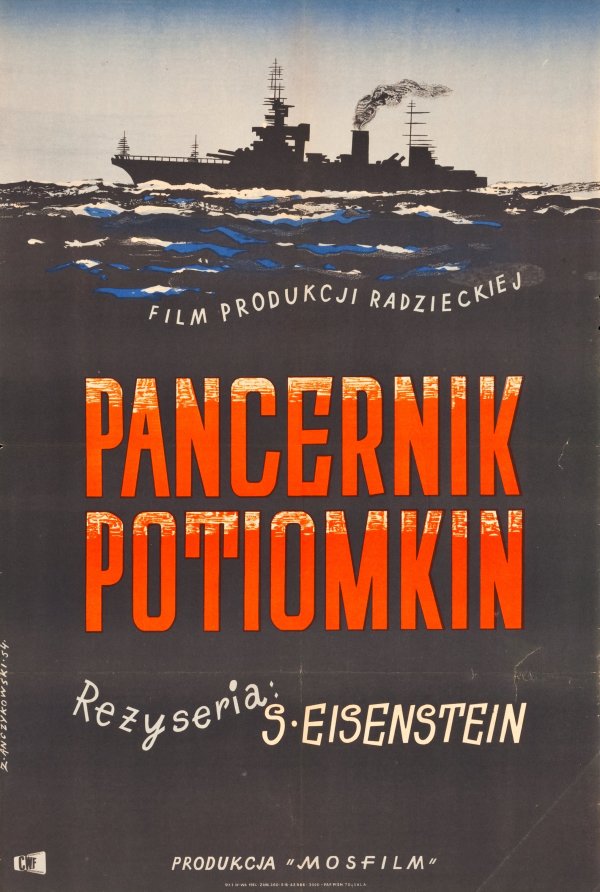 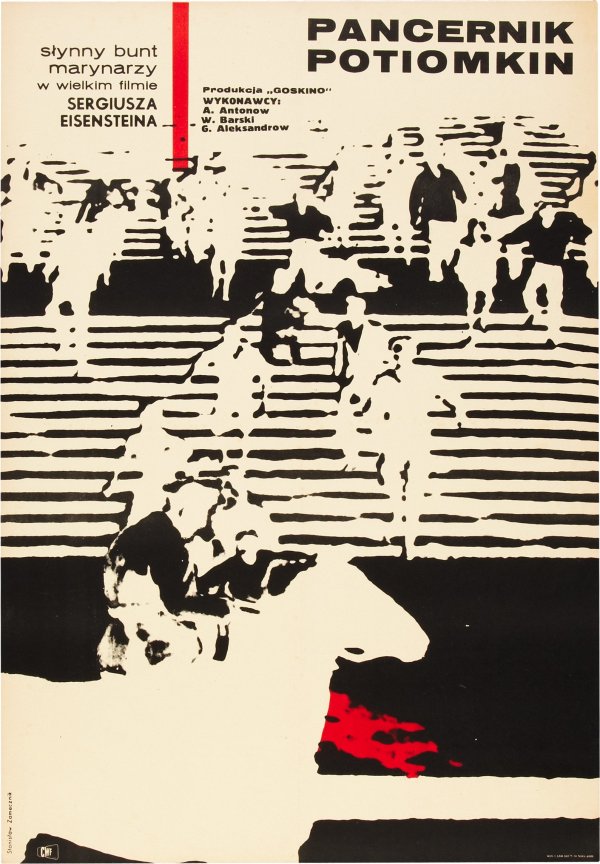 Every new country and re-release of Potemkin offered the opportunity for reinvention via promotional material. Even a small sample shows that there is always potential for an unexpected take on a familiar subject. 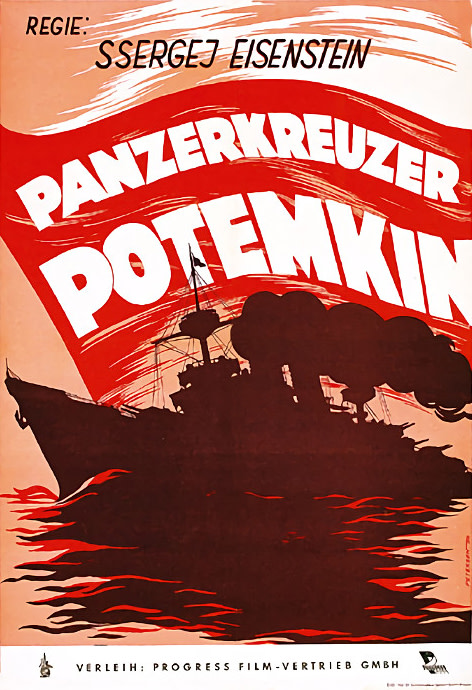 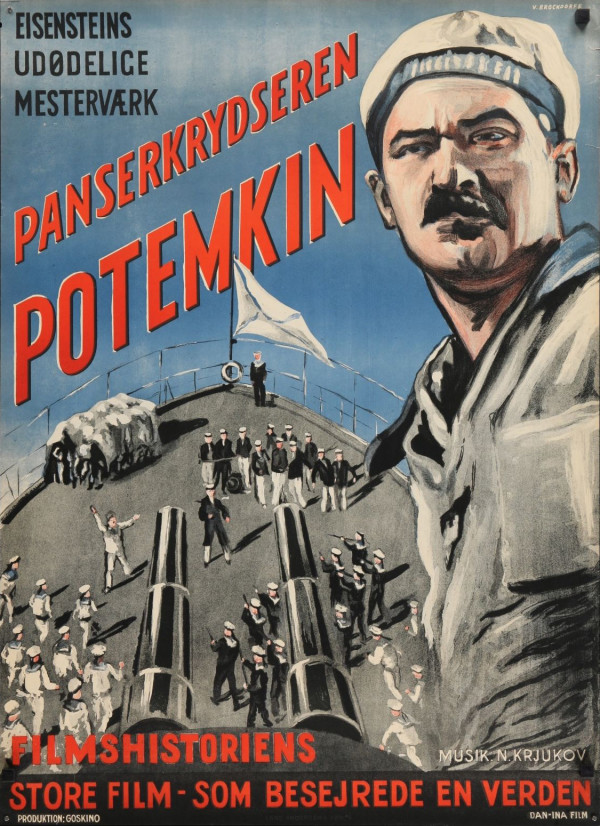 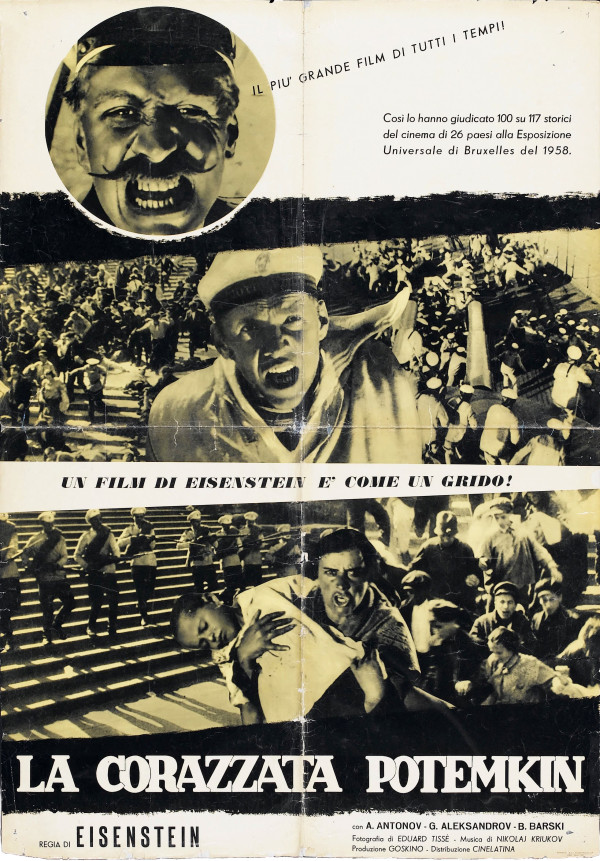 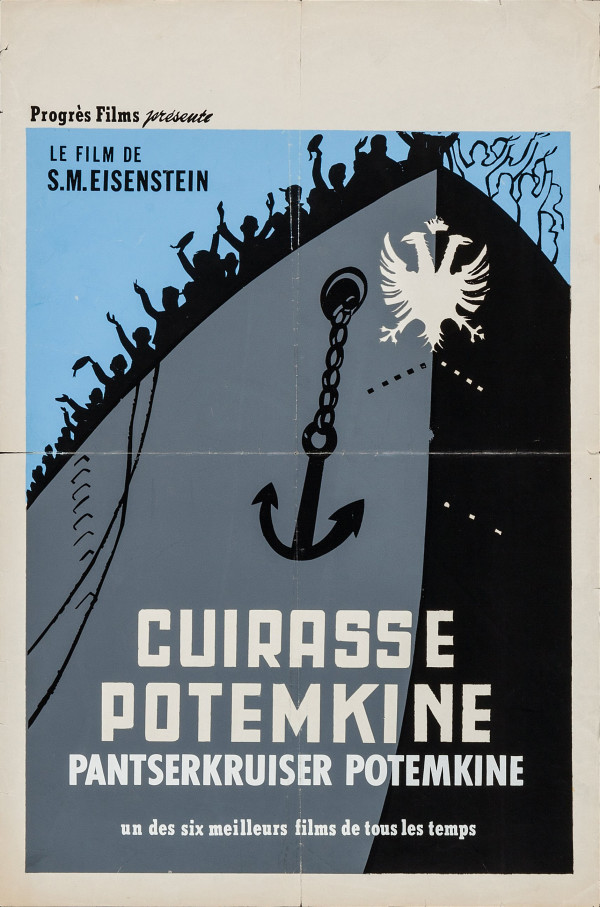 While most modern DVD and theatrical releases have followed Kino’s lead and utilized one of the original Russian posters, many modern designers have embraced the challenge to find new ways into a nearly century-old film. 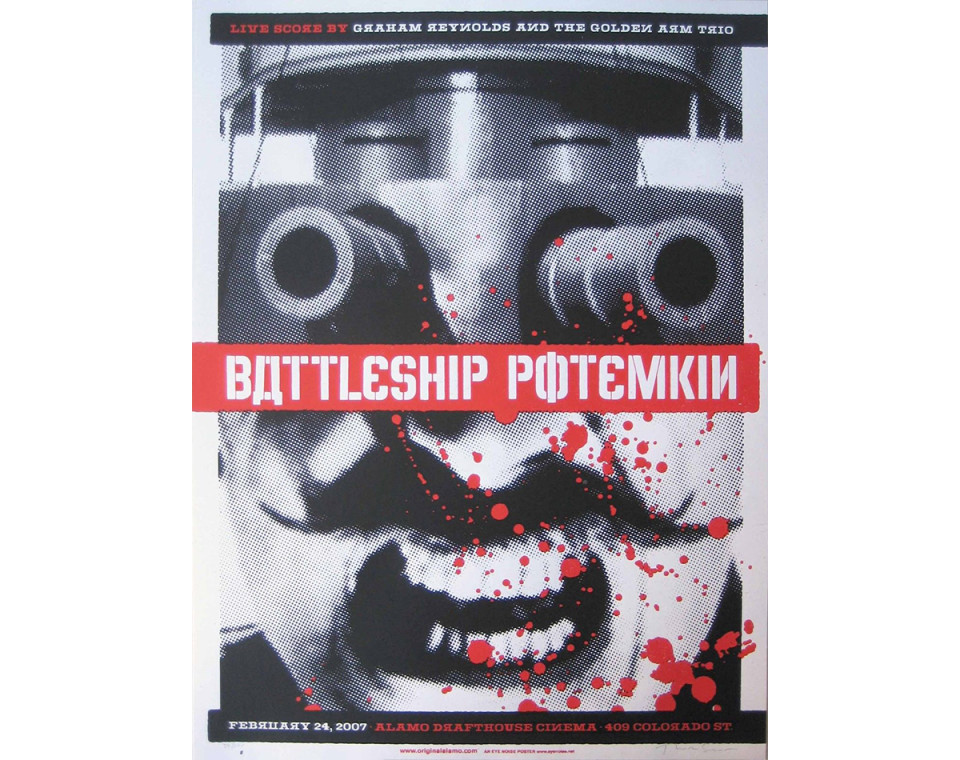 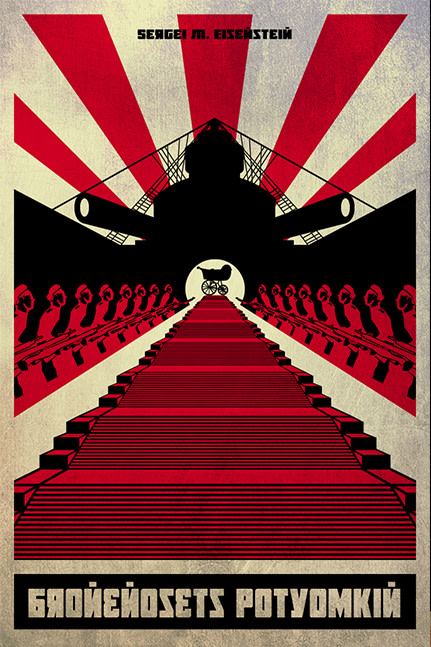 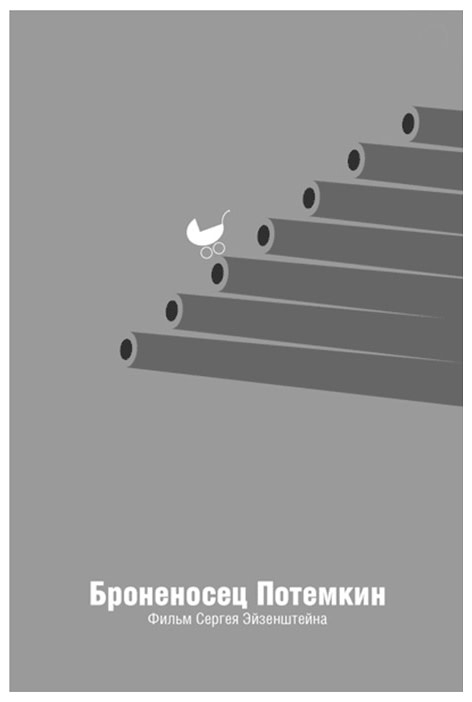 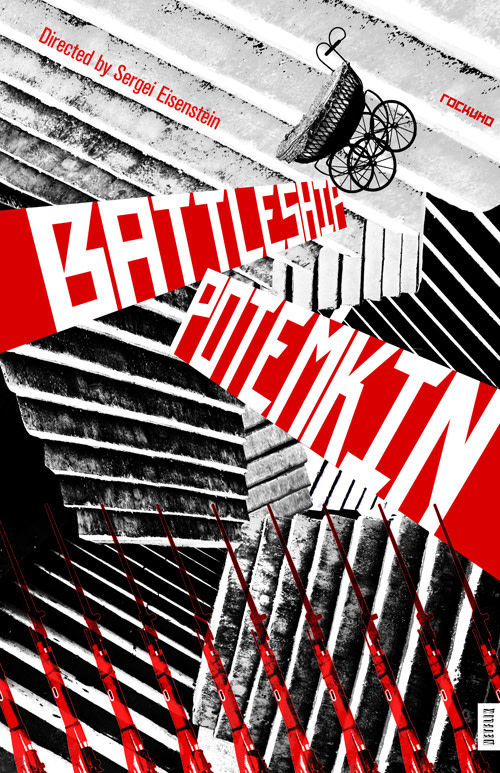 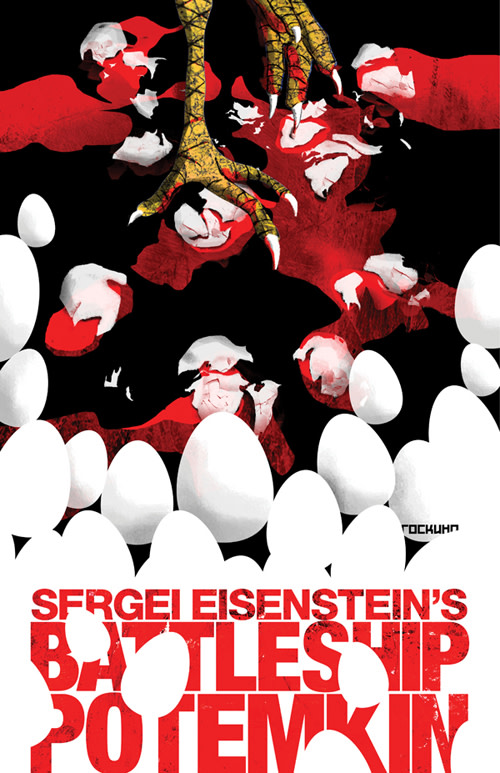 Pedro Almodóvar’s posters are as sumptuous as his films