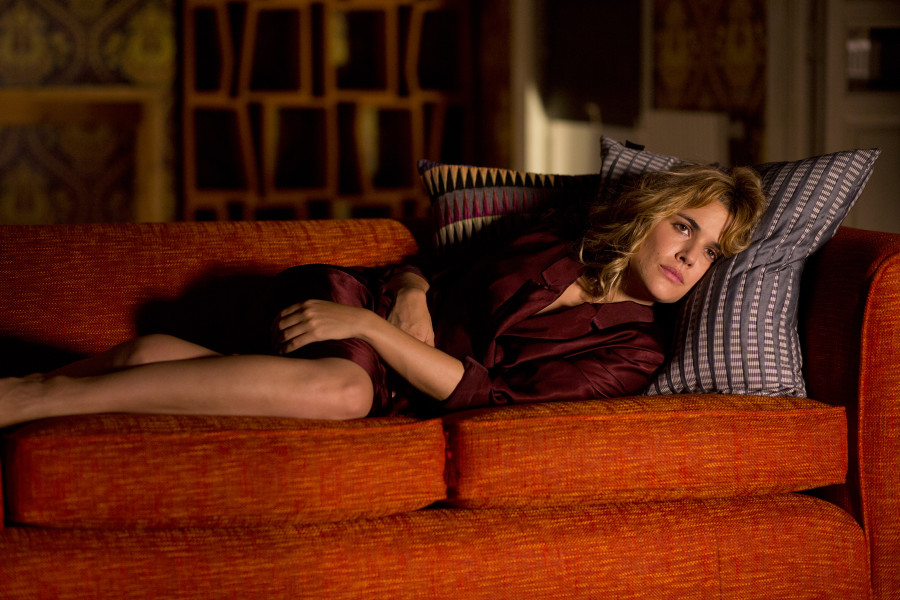 The Spanish auteur’s 20th film sees him turning a new leaf, with a subtly stormy adaptation of three of the Nobel Laureate’s stories

Love Almodóvar? TIFF begins a retrospective of the Spanish auteur’s films this winter. Begin with his 20th film Julieta, which opens today, Friday, December 23 at TIFF Bell Lightbox. (Note: some plot spoilers may be revealed in this piece.)

Pedro Almodóvar takes yet another turn in his latest domestic drama, Julieta, now playing. While the Spanish auteur is known equally for his pulpy melodramas as he is for his subtle but vibrantly psychological films, his 20th feature proves once again that it’s never too late for an artistic reinvention.

Julieta’s storyline is based on a cycle of three stories from Alice Munro’s 2004 collection, Runaway. In the original text, a woman named Juliet meets two men on a train heading to Vancouver, and her life is changed by these encounters. One of them commits suicide before the journey’s end, and the other is the future father of her child. Because it’s Munro, in the face of the cold tragedy of the first man’s death, Juliet and the second man talk into the night, kissing intermittently. Because it’s Munro, the heroine is also on her period during what turns out to be the single most pivotal night of her life.

In Almodóvar’s much more sensual version, he transforms Munro’s cold and Canadian story, set in the ‘60s and 70s on Canada’s west coast, into something much warmer. He transports the events of this woman’s life into a much sexier 1980s and ‘90s Spain. In his film, Julieta and the second man most definitely fuck on the train. Several weeks later, she shows up, pregnant, at his door.

Despite a few other fairly significant plot changes, Almodóvar’s adaptation feels extraordinarily authentic. Munro’s prose is subtle, and has a baked-in bitterness that makes Almodóvar seem like a highly unlikely candidate for collaborating with the reclusive Nobel Laureate. Even his darkest films have been lightly gilded in camp. His use of bright colours and occasionally hypersexualized imagery have created an instantly recognizable aesthetic, even as the content and tonal register has shifted to-and-fro over the years. While Almodóvar’s scripts have been densely literary, with classic novels making it into several of his frames, his adaptation of Munro’s story cycle could have easily gone a different way — imagine if he’d leaned into that period scene!

Perhaps I’m foolish to have felt surprised. Almodóvar has been, since the beginning, exploring some of what we’ve come to identify as “Munro country.” Renowned for working with stories about women — how we relate to each other, to men, to the world, and to our individual places in it — it’s no wonder he would feel a kinship with the woman who has made it her work to write Chekhovian depictions of our interior lives. Julieta is about the most complicated kind of relationship one woman can have to another; the beating heart of the story lies at the fault line between the contested territories of mother and daughter.

In both the film and in the final two of the three stories “Soon” and “Silence,” our heroine faces events that cause her pain, including the physical decline, then death of her mother, and the choice her daughter makes to cut all ties. In the film, Emma Suarez plays Julieta in middle age, and the small, dark cloud that crosses her face at the exact moment she first tries to comprehend her daughter’s refusal belies how quickly her life will become a storm. Earlier that summer, her daughter, 20-year-old Antía, had decided to sign up for a spiritual retreat. Julieta makes the drive to pick her up from the remote, mountainous location. An infuriatingly calm woman offers Julieta some tea before breaking the news: “Antía has chosen her own path and you are not a part of it.”

Munro’s Juliet reacts by making a point to remember every hateful detail of this woman’s face. Almodóvar’s Julieta seems to forget her immediately, overtaken with the immensity of her grief. Years later, in a letter to her long-estranged daughter, we watch her write: “Your absence fills my life and destroys it.”

In both versions of this story, our heroine suffers from anger and guilt over being separated from her daughter. In neither of these versions does she rise to the same level of chagrin over a similar choice she has made, that of abandoning her own mother and allowing estrangement to blossom within her relationship to her father.

Almodóvar casts another actor, Adriana Ugarte, to play Julieta as a young woman. While Suarez and Ugarte move with a similar sense of restraint, the younger Julieta has a slightly shaky quality, a sense of kinetic energy just barely contained. The scenes where she visits her bed-bound mother, with a one-year-old Antía in tow, have a rural quality familiar to Almodóvar fans. There’s a courtyard, the stone walls, a farming apparatus. There are similar scenes in Volver and All About My Mother, but with one key difference: where we’ve previously seen these country escapades as opportunities for women to connect through gossip and sundry rural chores, here we see Julieta feeling a sense of alienation from the place she was raised and the people who raised her. Her father is clearly having an affair with the young woman he’s hired to help care for his ailing wife, and Julieta sees and seethes. Suarez’s face is like weather, eternal and compelling at its most neutral, but especially when it changes. As the younger Julieta, Ugarte brings a vibrant acidity to her expression at the moment she realizes that her father has given up on her mother — and what’s more, she will too.

Almodóvar lets the parallels between Julieta’s choices as a daughter and her experience as a mother play out quietly. Even though the title character narrates the film, she can’t see what we see: how fate and family can come undone and how in one moment that’s the hardest thing in the world, and in another, barely merits an afterthought. How one’s roles change, and with them vulnerabilities, perspectives. How many ways there are to be but one woman, over the course of her entire life.

Munro hits the nail on the head a little harder. While Almodóvar hardly spares his Julieta any pain, Munro is merciless toward her Juliet, showing the reader her weaknesses with the same bitter clarity with which we see the major events in her life. When angry, Munro’s protagonist uses this single visit to her dying mother as a blunt weapon to attempt to win a domestic argument. Never once does she step back and think about how that visit could have taken a shape that would have vastly improved the final days of her mother’s life.

That said, something of the cold climate of Munro country has settled down into Almodóvar’s Madrid. Julieta is by far the director’s most sombre and reflective film, quiet and sore in a way that feels brand new. A darker direction, certainly, but welcome. Throughout the film, I kept being struck by the Spanish word for storm, since it repeats often in the movie and is so close to an English word for the emotional tenor of this graceful, beautiful film: la tormenta. Let it rage on.