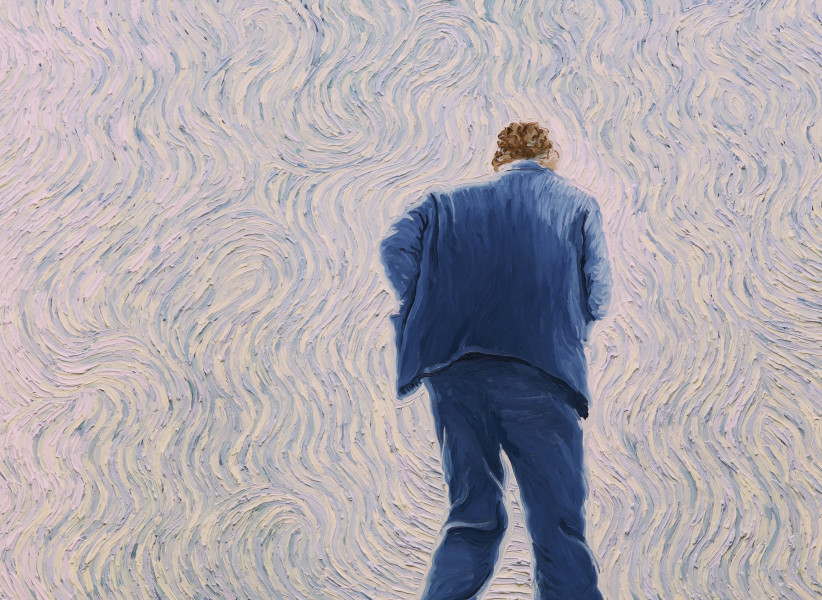 In Loving Vincent, post-impressionist master Vincent van Gogh’s art is brought to life to tell the artist’s tragic story in a completely novel way. Rendered in van Gogh’s famous style, the animated biopic was born through a painstaking process: the film was first shot in live action, the resulting 65,000 frames then individually painted over on canvas, and finally photographed and digitized using animation software. This unprecedented endeavour was just as difficult as it sounds: 125 artists-turned-animators came together to complete the animated masterpiece, among them Sheridan College’s Valerie Fulford. Prior to her live Q&A at TIFF Bell Lightbox following the Friday, October 6 screening of Loving Vincent, we spoke with Fulford about her experience working on the film, and the challenges and rewards of this unique method of film (and art-)making.

The film is truly incredible — congratulations!

I haven’t seen it yet! [Laughs] I’ve seen parts of it, the parts I did, of course. I was never in a position to see it because our Greek team didn’t have a theatre to project it, only the Polish team did. We only saw it on a television monitor when it was about four-fifths done, so there were gaps and things missing. The film hadn’t yet been cleaned up.

So you’ll see it for the first time with an audience this week! That’s exciting.

Yeah! It’s overwhelming actually ... I was in Greece for over five months working on it [following preliminary training in Poland].

Five months seems like a long time to be away, but [considering] how many frames you were responsible for completing, it seems so short in comparison.

Oh yeah, it definitely was. But at the same time, the last group that came in — the international artists — we were under the gun to finish the film with the core group of local artists. We put in much longer days, one day off a week instead of two — we were really under pressure to help finish this, and that’s why we were brought in. We were also extremely devoted to the project, so not one of us was really cavalier about it. It wasn’t just a paycheck for us — it was a passion project.

Loving Vincent is absolutely extraordinary in its execution and technique. Could you walk us through the process of making it all come together so seamlessly?

That has so much to do with the initial direction and Dorota [Kobiela]’s vision, with her basically inventing this way of doing it. People had told her it was impossible and it would never get done. [The artists] came in and were trained very quickly because time limits were extraordinary. There was a lot of financial pressure on the filmmakers. We came in as complete novices, none of us knowing what to expect. We were quickly taught the basics of animation and how to apply them to painting — the painting part we were already experienced in. The only people that could join this team would already have to be really good at handling paint and brush, and colour mixing was a huge part of it too.

When [the canvas] was in front of you, the colours weren’t always the same as when they were finally put up on the screen. We had these computer monitors mounted above us that we had to refer to. But the initial colour mixing was a very long process: every brush stroke that was used from a former scene had to be matched. In front of you, you might see a simple green, but once it was photographed and then projected onto the Dragonframe stop-motion programme, it was now a blue-green. You had to mix a colour that had nothing to do with the [projected colour]. Every stroke and colour used had to go through this process. We would mix paint, mix paint, mix paint — make a brush stroke, photograph it, pull it up on the computer, match it, blow it way up.... Once we had our colours matched, we had to keep as much paint on our palettes that could then go through up to 150 frames and paintings from that. We couldn’t deviate from those colours. We had these complicated palettes that we would go back and forth from for each frame — we had to repaint everything that might be moving. We couldn’t skimp on the paint, because if only the mouth and eyes were moving and the face was moving very little, you still had to repaint everything, otherwise you’d have frozen areas. So everything had to be moving.

It was an incredible learning curve that we had to achieve in three weeks of training. We had to move from being painters to animators, and most of us were not animators when we started this. The three-day test that they put us through — about nine hours a day — was to find out if we fit the profile of who they were going to put in one of these limited animating units. They had to choose the best and couldn’t just hope that you’d be okay — they had to know that you’d be okay, because time was a huge part of what was going on. I’ve never been through anything like it in my life. 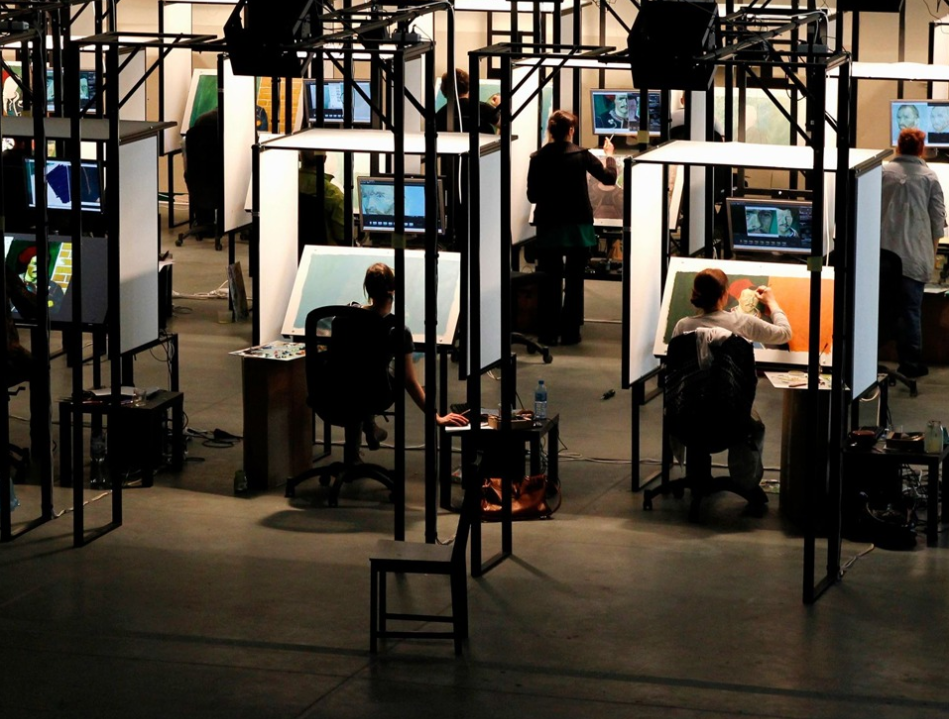 How did you become involved in this project and how has it compared to the work you’ve done in the past?

I saw a trailer on Facebook last April and I was immediately hooked; I saw my future in this little trailer and I had a feeling that if I could be part of this, I would give anything. I was so enamoured of what I saw in front of me... I just fell hook, line and sinker for this extraordinary, beautiful idea of using oil paintings to animate. The vision was incredible — that’s why we all applied and stayed, because it was exhausting and gruelling work. I don’t think you could have gotten people who didn’t love this project to do what they did. I’m physically exhausted... my shoulder is in bad shape from the repetition of holding my arm up and painting that long. I’m 63, so I was really physically challenged. But the most important part was that we already knew how to paint — without that you couldn’t have done it. That’s not something you learn over night.

__How were specific van Gogh paintings incorporated into the film? __

The directors chose 85 paintings of his. Dorota and Hugh [Welchman], especially Dorota, she is tremendously knowledgeable about van Gogh — she was everything to the story itself. I give her all credit for her vision and understanding. We were the worker bees, and she was the queen bee.

Did you and the other animators work directly with the actors to guide their performances in any way in order to maintain van Gogh’s visual style?

We had nothing to do with the actors. It was all done before we started — the rotoscoping, everything was done before we entered the scene. Douglas Booth visited the Polish studio a few times and the artists were thrilled! I hate to say that we were “just the worker bees,” but I think Dorota would give us full credit that without us, the film couldn’t have come together. That’s what kept most of us there through the gruelling work. 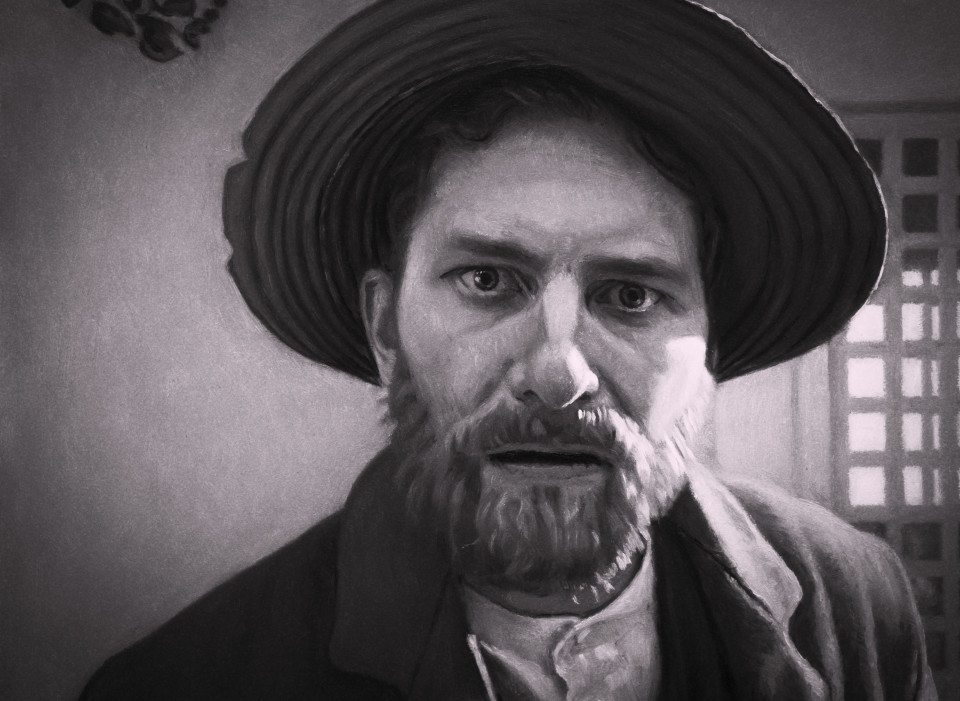 The black-and-white flashback scenes are painted in a different style from the colourful present-day world that we associate with van Gogh’s style. Could you speak about this choice?

That was done intentionally to visually separate his paintings from parts of the film that he didn’t actually paint in his real life, and so they were treated as flashbacks. The directors decided, to avoid any confusion about whether or not this was one of his paintings, that they should be painted in black and white. Van Gogh had so many styles in his life, and the styles change throughout the film according to this, but everything in his style draws from his original paintings. The directors also just wanted to have a nice, old-film feel.

You’re one of about 125 painters who worked on this film. What was it like collaborating with so many different artists on a project?

We didn’t really collaborate much at all! The original trailer showed a bunch of artists standing at stations in the open, but the team couldn’t do that in the end when they realized they couldn’t control the ambient light that would be coming in from other stations when they went to photograph the finished frame. You had to take two photos in sequence for each frame. They then realized they had to build stations with closets. There really wasn’t a lot of activity outside of it. They put big, black curtains around us — we only drew the curtains for the photographs, then we would open them up because the electrical load on the studio was so high from the halogen lights (two per unit) that we would be working in extreme heat [in the Athens studio].

Which scenes were you directly involved in painting?

I did some work on Armand [Roulin] (Douglas Booth) in the field, when he has the chair and the stick — I did the background and a small portion of the animation, but unfortunately I have bad arthritis and because the figure in that scene was relatively small, the tiny brushes were cramping my hands up so badly that I was having trouble painting. I asked my supervisor to move to portraits because I could do bigger brushstrokes, so I did exclusively portrait work from there. I did a lot of work on the old man standing on the ladder, but really, when you think about the actual seconds involved, it’s not much! 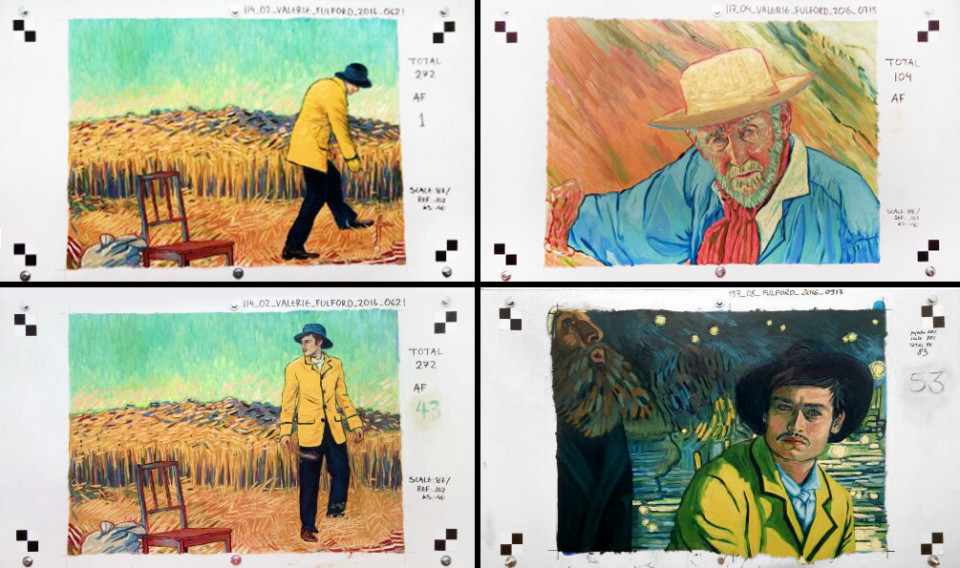 A selection of Fulford's scenes. Courtesy the artist.

Then I did one of the postman (Chris O'Dowd) and Armand sitting at the very end of the film, when it cuts to Starry Night… It’s not very long, but it was two portraits and pretty labour-intensive. Another thing I found challenging with that scene was that it was very dark; with the glare from the halogens onto the wet paint, it was often hard to see the colours I was painting in. It’s a bit easier to see the bright scenes, like the old man’s beautiful, bright colours, and it’s much easier to see where I needed to put my brushstrokes.

None of the international team would say we were the fastest bunch in the group because of the learning curve, but I’m pleased with what I got done in the time I had.

It’s going to bring tears to my eyes! I think all of us are all extremely bonded to each other. When you were saying about the collaboration — we didn’t really collaborate, but we certainly empathized with each other, and appreciated the effort we were all putting in. There was a definite sense of camaraderie, and we just really loved each other.