An interview with improvisers Kayla Lorette and Evany Rosen

Whether you’re an emerging filmmaker or a seasoned pro, any artist in the the film system is always at the mercy of well-meaning executives who just want to keep their jobs. The nonsensical criticisms provided by the Los Angeles water bottle elite have their own kind of comic surreality. In fact, the big pull quotes below are not from the Network Notes show — they're real, anonymous feedback received by screenwriters, as published on the Twitter account @TvNetworkNotes.)

(re: Walking Dead pilot) “This is awesome. I really love it. Does it have to have zombies in it?” – NBC

When they’re not dressing up like Sherry Lansings-in-training, Lorette and Rosen find themselves at a pivotal moment with their own comedy careers. This September, Kayla starred in She Stoops To Conquer, a short film she wrote with Zach Russell (who also directed the piece) that premiered at TIFF in 2015. Lorette plays a drag king obsessed with Canadian character actor Julian Ritchings. When they meet for the first time, Lorette wearing a mold of his face, their psychosexual love blooms. A David Lynch fever dream in the making, She Stoops To Conquer won “Best Live Action Short Drama” at the 2016 Canadian Screen Awards. Evany is a member of the acclaimed viral comedy troupe Picnicface and has performed standup across North America, including Just For Laughs. In any other country, they’d have their own Broad City development deal. But for now, the two best friends-turned-collaborators can air out their dissatisfaction by embodying the gatekeepers that hold them back.

WHO ARE THESE WOMEN? THEY FEEL PART SAMANTHA FROM SEX AND THE CITY, PART JOAN CRAWFORD, PART ABSOLUTELY FABULOUS...

They are nameless, ageless and exhausted production amazons. The kinds of women who have seen what doesn't work so many times that it's hard for them to identify what might, so they spew nonsense loosely cobbled together from experience just to get through the damn day. And there is always a new juice option to go with their steady diet of white wine and "supplements" (hardcore prescription pills).

__WHAT'S SUPER FUN ABOUT THIS SHOW AND WHY SHOULD PEOPLE COME TO SEE IT? __

Everything and because. In truth, it's hard to exactly articulate it, but it's a great showcase for a number of incredible Toronto comedians, all through the guise of two best friends in wigs being mean to them, while they make up truly terrible ideas for movies. Fun!

“Maybe instead of an alcoholic, she should be a well-adjusted woman who everyone likes and respects?” – ABC

IN A COVER STORY WITH NOW MAGAZINE, YOU TALKED ABOUT YOUR LOVE AND OBSESSION WITH THE "SEVERE FOOLISH WOMEN" IN OLD HOLLYWOOD CINEMA. CAN YOU TALK ABOUT SOME OF YOUR FAVOURITE FILMS AND MOVIES?

Sunset Boulevard, All About Eve, A Streetcar Named Desire –- we love any movie where a once-beautiful woman feels herself melting and has a huge reaction to feeling the spotlight slip off her. Whether it's shooting William Holden in the pool, getting wasted at your birthday party or just feeling a bit overwhelmed by Stanley Kowalski, we love those moments in film. Also anything like Rosemary's Baby, where it's not about aging, but where we still get to see the evidence of an intense female need and the hysteria that ensues when that impulse is called "crazy."

PLEASE DESCRIBE THE PROCESS OF GETTING DRESSED UP TO PLAY THESE CHARACTERS. HOW DO YOU PREPARE TO PLAY AN L.A. POWER BITCH?

No makeup tutorials have been consulted. The contouring is bits and pieces of minimal theatre training and a vague understanding of face shapes, frantically put on at 9:45 after we've had too much pizza and wine and realize we're supposed to be at the theatre in less than an hour. It never occurred to us to look at any makeup tutorials (that's going on the to-do list), though drag makeup is definitely an inspiration, in terms of the exaggerated contouring. Though we wouldn't insult beautiful drag queens anywhere by insinuating that our poorly executed lady troll makeup is even a close approximation, visually or skill-wise.

“Please put a life vest on the frog. Trust us. We already went through this with the duck.” – ABC Family

AS FILMMAKERS AND WRITERS, WHAT HAS THE PITCHING PROCESS BEEN LIKE FOR YOU? WHAT MAKES A GOOD EXECUTIVE?

In reality, whether you're in Canada or the United States, there are always going to be good executives and bad executives. The bad executives always seem to give notes for notes’ sake, either because they don't want to lose their jobs (Canada), or because they just like to hear the sounds their mouths make when they talk (America, everywhere). The best executives are those who WANT to be executives (not former creatives who became executives but are still nostalgic for the former), they often give terrific notes and are open to some pushback because they trust the creatives they're working with.

WHAT KINDS OF SPACES OR OPPORTUNITIES SHOULD BE OPENED UP FOR WOMEN TO PLAY A RANGE OF ROLES IN COMEDY? WHAT KINDS OF CHARACTERS DO YOU FIND YOURSELVES PLAYING? WHO WOULD YOU LIKE TO PLAY?

Having answered questions like this for our entire careers, we think the simplest answer is to say that we want what all character comedians want: to play whatever we want, however we want, whenever we want, without always having to make a statement with it, or worry about how it will be perceived. (Ex: "is she saying women are dumb?" "Is she saying women should act like men?" "Is she saying women are sluts?") Just simply for the joy of playing and playing together. Hopefully embracing that joy and not worrying too much about the rest will be the best feminist example we can offer going forward. Or, we're idiots.

“Do not use the word ‘Moron’. You will offend all the morons in the audience. See list of approved alternatives.” – NBC

AS TWO PROLIFIC CHARACTER COMICS, WHY DO YOU THINK THERE ISN’T MORE VISIBILITY AND THE OPPORTUNITY FOR WOMEN IN CANADIAN COMEDY TO MAKE OUR OWN SHOWS AND SITCOMS? WHAT WOULD YOUR DREAM SHOW OR FEATURE FILM LOOK LIKE?

The real fact of the matter is that there is not a lot of visibility for anyone in Canada right now. There's not a lot of money, the demographic is smaller, more fractured and harder to define and we're all still straddling this idea of just how "Canadian" we want our Canadian content to be. Fortunately, Baroness Von Sketch Show is about to premiere on CBC and solve everything. In the meantime, we always have ideas on the go for shows or projects we'd like to make together because we love each other and love working together and are particularly inspired by one another as artists and individuals. Who knows what shape our next endeavour will take, but it's safe to say there are probably some more wig purchases in our near future.

We asked the ladies behind Network Notes to put their critical faculties to the test. Here's what their studio exec alter-egos had to say about the real-life publicity materials behind Canadian masterworks Denys Arcand's Jesus Of Montreal, Atom Egoyan's Exotica, Sarah Polley's Away From Her and Xavier Dolan's Mommy. 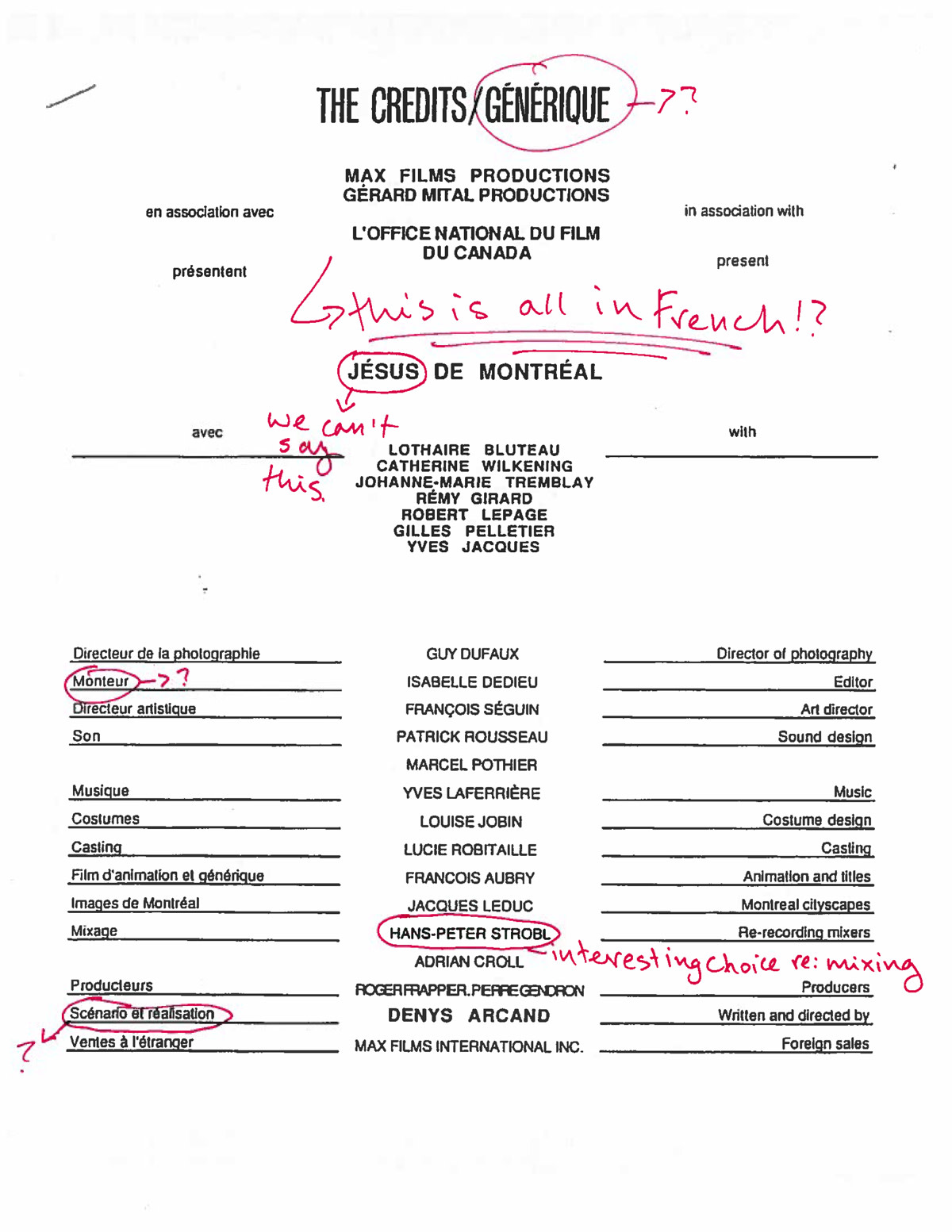 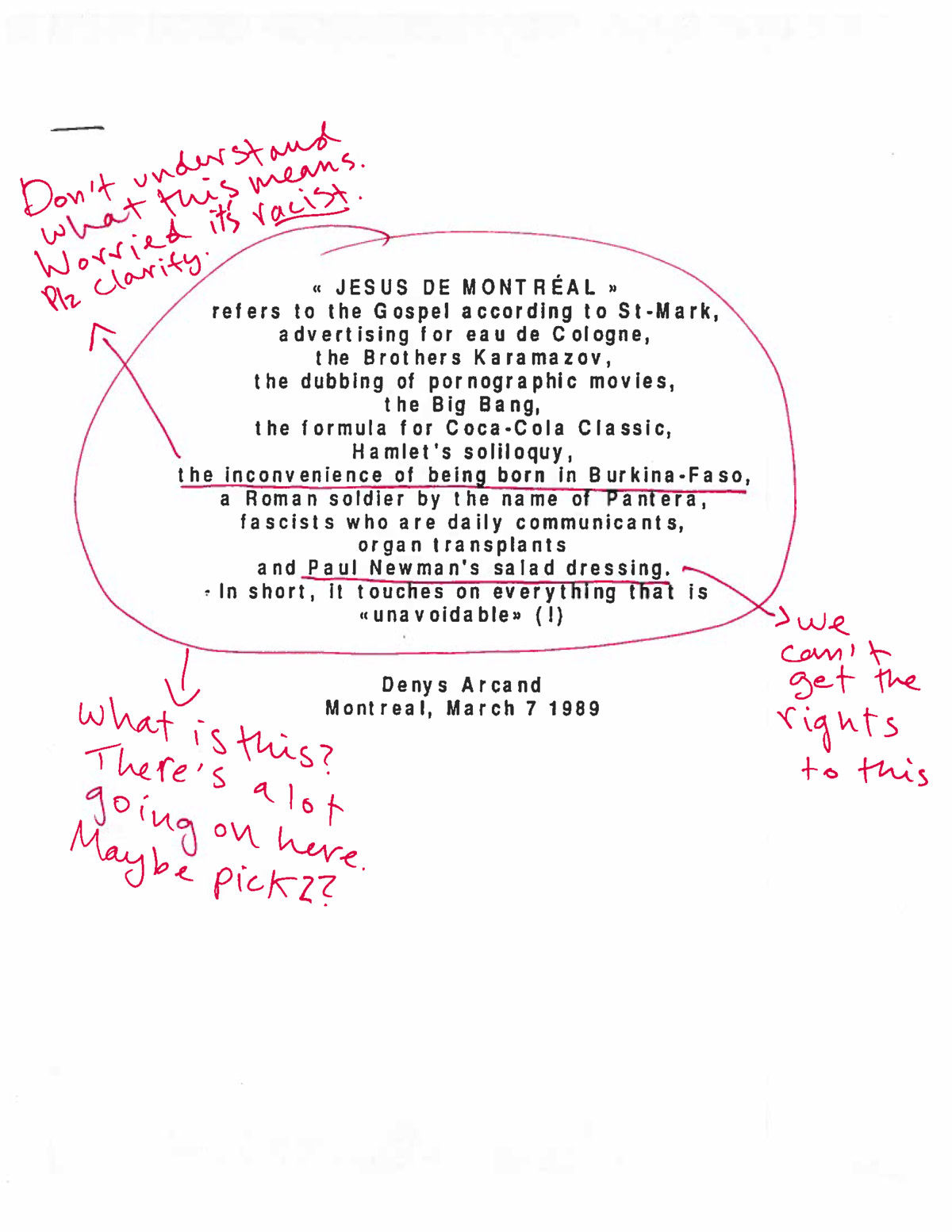 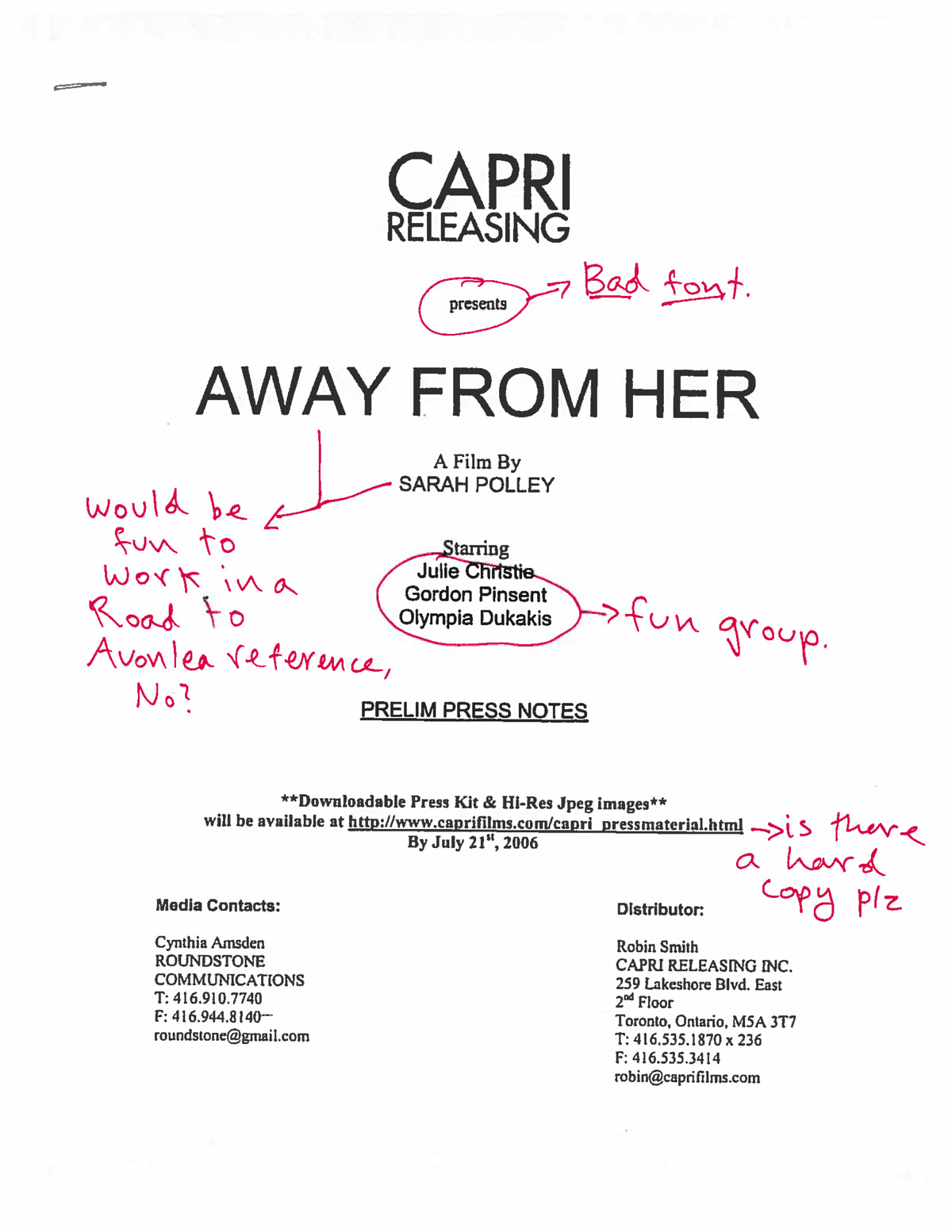 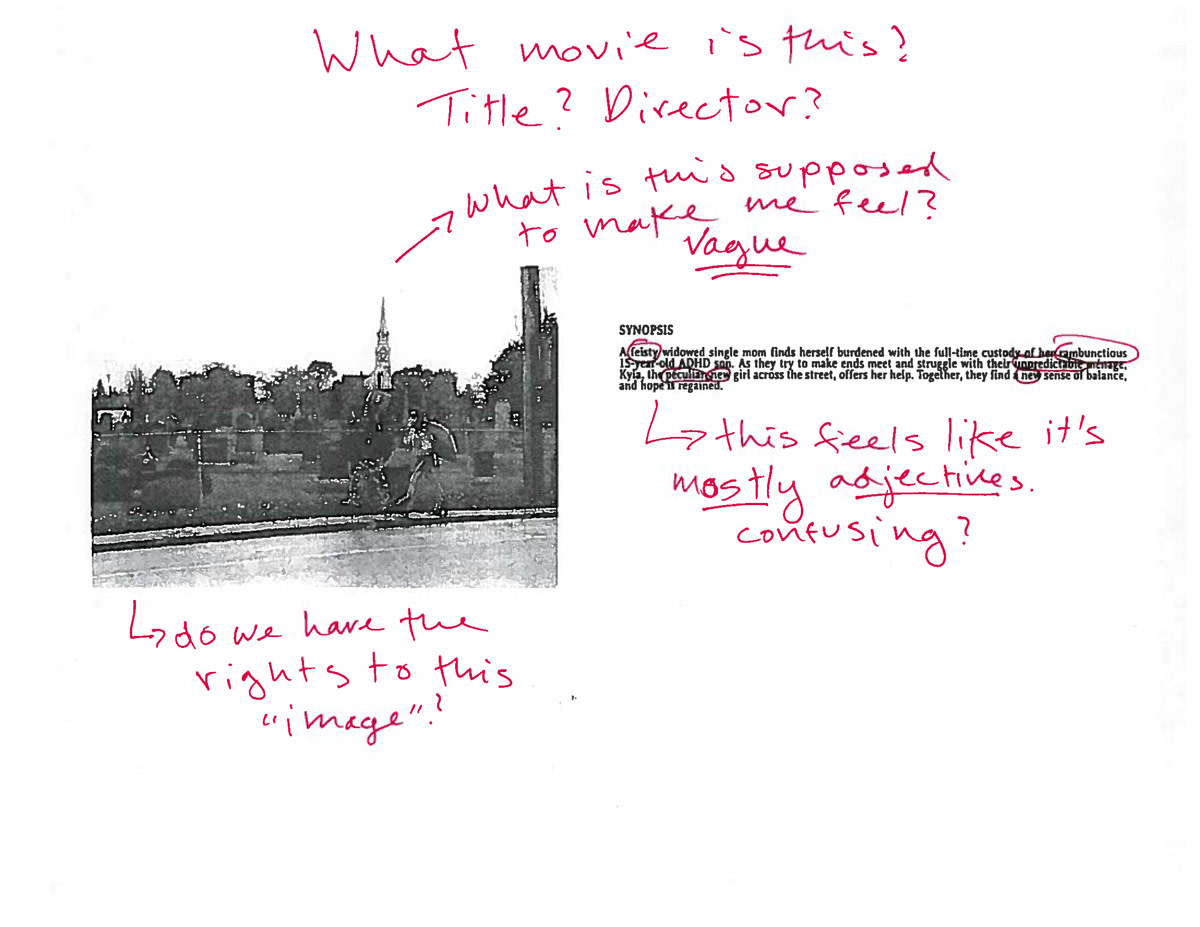 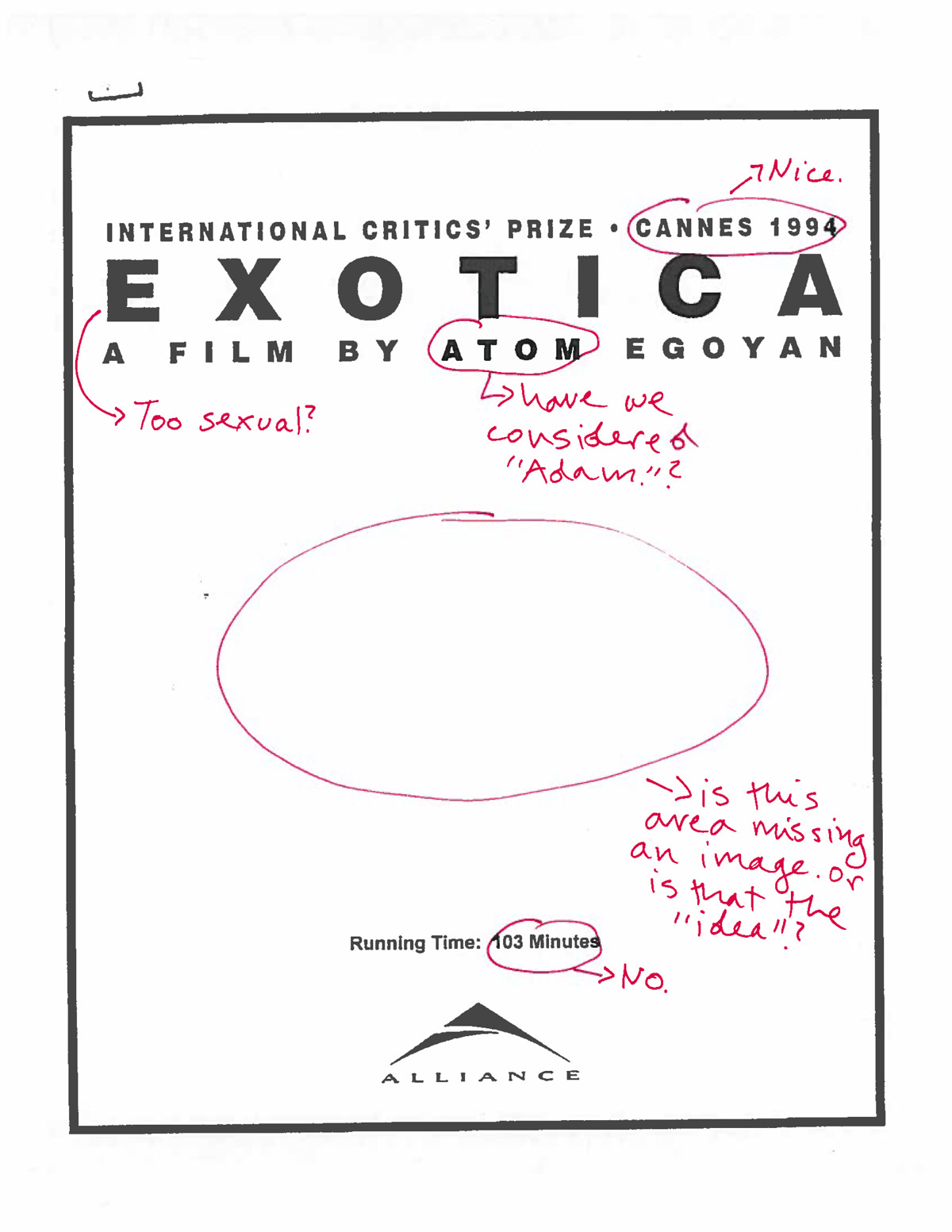 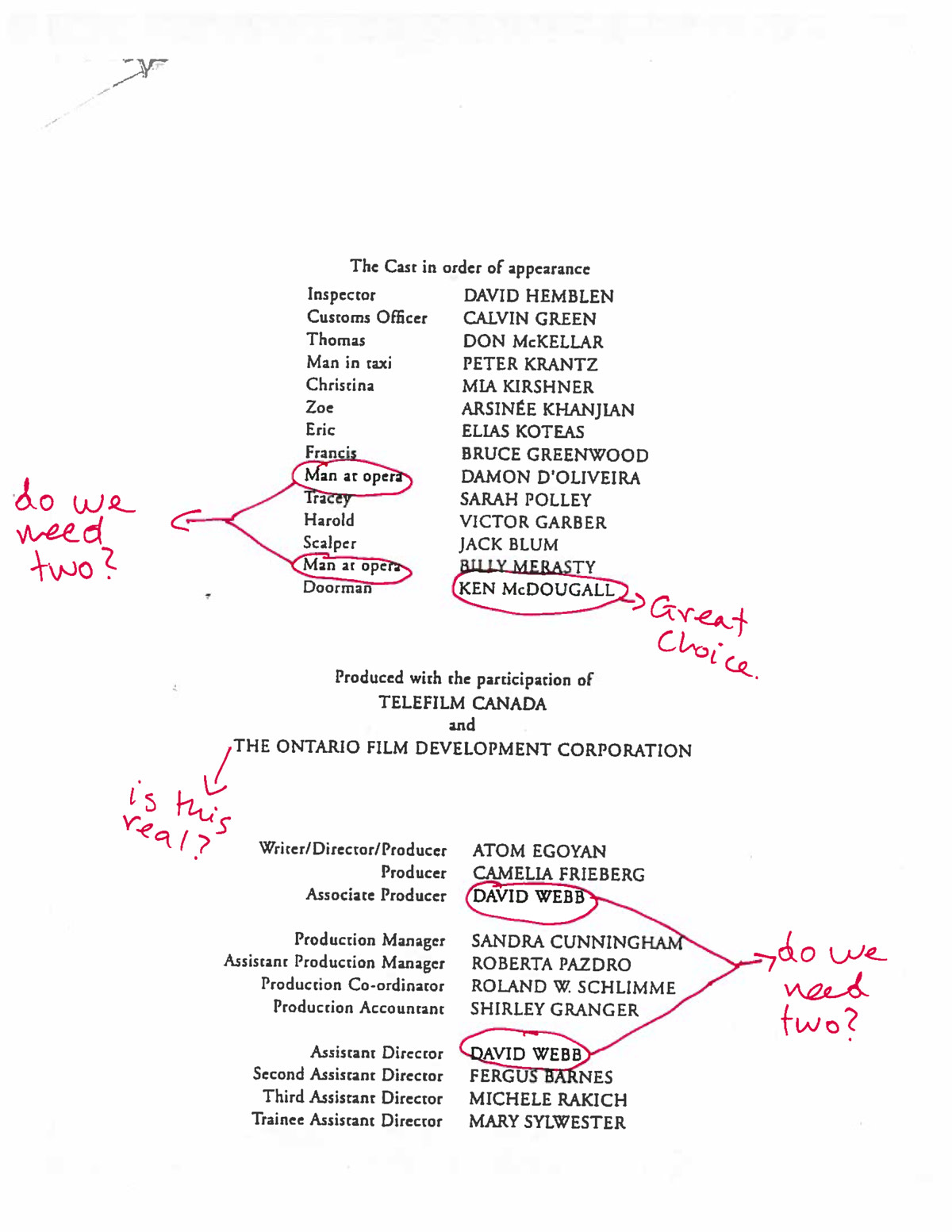