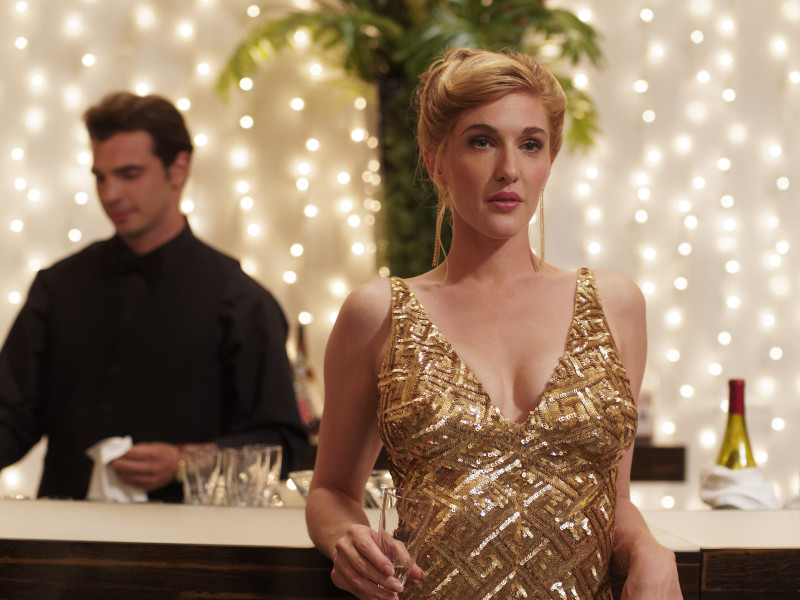 Anne Émond’s Nelly (which screens January 21 and 22 as part of the Canada’s Top Ten Film Festival) is an ambitious and boisterous portrait of Quebec novelist Nelly Arcan, who stunned readers with her two acclaimed novels, Putain (2001) and Folle (2004), before committing suicide at the age of 36. A confessional memoirist who drew on her past as a sex worker, Arcan was a controversial figure in her appearances on Quebecois talk shows and radio programs. (A Catholic culture whose artists have always been torn between sexuality and propriety.) Émond’s film crafts multiple personas for the author (those of the writer, the lover, the call girl, and the ingenue), all played by TIFF Rising Star Mylène MacKay. In this remarkable film, Nelly embraces Arcan’s life while avoiding mythologization, affording a female artist far more allowances towards sex, drugs, and rock ’n’ roll than usually seen in Canadian cinema.

Émond spoke to The Review at TIFF 16, where Nelly made its North American premiere, about her personal connection to Arcan’s writing, her identity as a French Canadian filmmaker, and why the careers of Denis Villeneuve and Jean-Marc Vallée dare her to dream.

What made you want to tell Nelly Arcan's story? Do you feel like it connects to your own understanding of Quebecois identity?

I've always been a fan of her work. She's a star in Quebec and she was really well-known, published by the most important French publisher. I was maybe 10 years younger than her. I read her books when they were coming out and I was impressed. I was a fan. She would annoy me sometimes because she had a very strange vibe with the media and a very strange public image. She had fake blond hair, fake Botox lips, huge, fake boobs. Everything was fake. She was really strange also because she was very, very shy, very nervous. It moved me. Why do you need all these artificial things on you? You're so bright and your writing is so great. It was a love–hate relationship.

When she committed suicide in 2009, I had never met her, but I cried like it was a sister. I don't know why, but I was really angry and sad. I took it personally, almost. When the producer called me and said, "Oh, I was thinking about you to make a film about Nelly Arcan...” I thought, I'm a good person [for this]. I felt that there was something much larger than Nelly Arcan. I think she represents a lot of women.

Your film is almost, I want to say... kaleidoscopic. It's not a straightforward biopic. It's almost like Todd Haynes’ I'm Not There, with four different interpretations of Nelly’s identities and personas. How did you create this structure, which is so radically different from what you might expect from a typical Canadian biopic?

I was convinced it would be a great story, but I was also anxious because there are many ways to approach this subject. She's not a superstar. Nobody knows her, except in Quebec. Her work has been translated, but not that much. I asked myself a lot of things, I re-read her books, and met a lot of people around her... her family, ex-boyfriend, publisher, psychiatrist.

Then I wrote the script, which took me a year. It began like a factual biopic, where she was born, her school, how she started to write. I read it and it was really, really boring. After one year I was like, “Oh no, it's a terrible script." It doesn't even represent her because Nelly Arcan was an eccentric girl, she was over-the-top, she was chaotic and her writing was the same. So I thought, "Okay, I have to just expose those sides of her and do something different." It came to me, all those characters, because I met her father and he told me something; then I met her ex-boyfriend and he told me something like it's the opposite person. I had the feeling that she had many lives. It was a puzzle, I couldn't understand it. That gave me the idea to do four different characters in the same film, all played by the same actress.

How did you work with your lead actor, Mylène MacKay, to create these four distinct characters?

Mylène MacKay is to me, a revelation. She's so strong and fragile in the same way. I did a huge casting process to choose her because she's not well-known, she's a very young actress. We saw maybe 40 actors, and I wasn't looking for someone who looked like Nelly Arcan. She herself was completely transformed, so in the movie, we could do whatever we wanted. I was more looking for a vibe, a strange vibe, and Mylène had it.

Once we met, we chose each other for this film. There's a lot of tough scenes, but she understood everything. Every character, every different Nelly had an inspiration. With the writer, we thought about Virginia Woolf, how she used to move. For the star, the one who is dancing in the movie, we were thinking about Marilyn Monroe. For the lover, we had Amy Winehouse in our heads. There were a lot of references of great artists and great women. 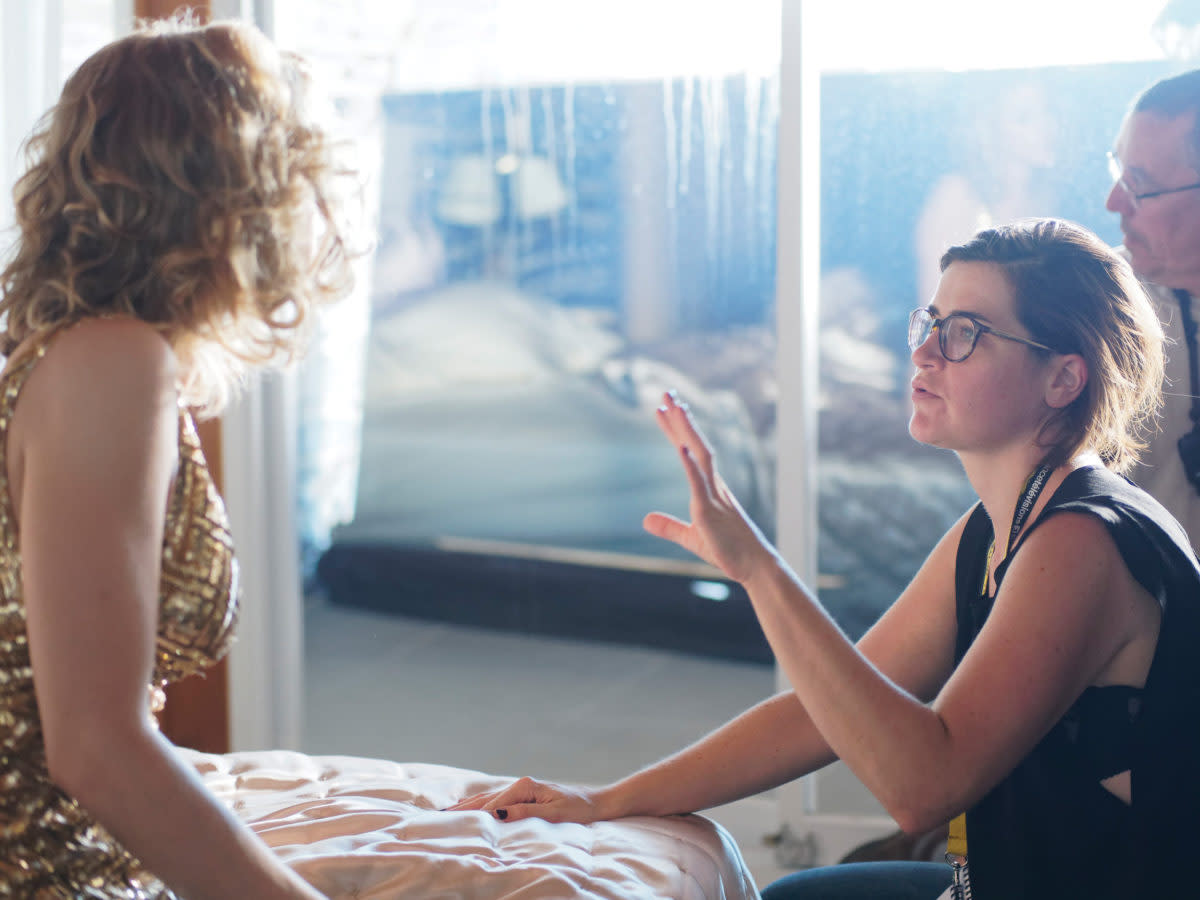 Was there a playlist in mind?

When I start the writing of a new script, I always start a new playlist on my computer. First, it's one song, at the end, it's like a hundred songs. But I always listen to the same songs for maybe one or two years. In the case of Nelly, I listened to a lot of songs by Dear Criminals. They’re an indie band from Montréal who ultimately made the music for the film. It’s very soft, dramatic music, almost like a horror film. They sound really strange and dark, I liked it for the film. Amy Winehouse was on my list, a lot of Nina Simone. A lot of French singers too, like Françoise Hardy, Édith Piaf. I was listening to mostly women, I don’t know why exactly. Well, some songs by Joy Division.

Your second film, Our Loved Ones, played both the festival circuit and in smaller communities across Canada via TIFF’s Film Circuit program. What was it like to see such difference audiences discover your work?

I've been lucky and I travelled a lot with Our Loved Ones around the world. We started in Locarno in Switzerland, then we played TIFF. I had thought of it as a very local story because it took place in this small town. It’s French Canadian with French Canadian music, it took place in the '60s, so I was sure it was a local film. Finally, I understood that it's a family movie. In Mexico and Locarno, they would tell me, "It looks like my family." I was like, "Oh, really?" It's good news because there was something universal about the film. After it was selected for Canada’s Top Ten in 2015, it played at different towns in Canada. The reactions were very strong, very emotional. I was happy, because that's why we make movies: to touch people.

__What does Canadian cinema mean to you? __

First of all, Montreal is very small, so we all know each other's films and love them. It's funny because I used to come to TIFF with my short films 10 years ago, and I remember at the beginning a lot of my new friends from Toronto were showing their short films and telling me, "Wow, how do you do that in Québec?” Like, they were impressed. Now I feel that things are happening more and more [in anglophone Canada]. Of course, there is great Canadian cinema like Cronenberg. We hear the same names all the time, but then there’s Sleeping Giant from Andrew Cividino and many others... I have the feeling that there’s more young filmmakers making it now. It's a very cool gang; they make good films.

I think anglophone Canadian filmmakers always look to Quebec filmmakers, as if Quebec cinema can do something we can't. Why do you think Quebec cinema continues to break the rules and boundaries?

Well, it's a very good question. In a way, I'm proud to realize that it's still true. Quebec cinema is still very strong. I think Xavier Dolan is a leader, but he's not the only one. First of all, it's public funding. We decided that part of our money would go to culture and to movies. SODEC is the public funding in Quebec and it's pretty strong. And I think the fact that these past filmmakers exist, it's a model for us. I had Jean-Marc Vallée, Denis Côté, Denis Villeneuve... filmmakers who would travel with their films and become international. We all help each other in a way, we inspire each other.

It's very inspiring to see the career of Denis Villeneuve and Jean-Marc Vallée. It makes me dream, to be honest. I would have never thought like that five years ago. I would be more shy and so anxious about my present projects. Now, more and more, I'm dreaming and I can see myself in maybe five years, trying to shoot a film or a TV show [in Hollywood]. Blade Runner 2, it's not for me. But I think there's many interesting films that can be made there with our heart and without losing ourselves.

Is there an anglo-Canadian film that also inspires you?

I'm a big fan of the work of Sarah Polley. I'm a fan of Cronenberg, of course. Maybe everyone says that, but to be honest, he’s made really great films that are classical.

Lastly: when you were shooting Nelly, was there a specific moment on set that just felt magical? That feeling you can only get from making a movie?

Nelly was my biggest production, in terms of money and how many big trucks you have outside. There were a lot of extras, which was huge for me, because my first film (Nuit #1) just had two people in an apartment talking. The first day of shooting was the scene when she dances in the ballroom and wears the golden dress. There's a lot of people, it's a huge scene. Myself and Mylène chose the song, and we thought a lot about the dance. I remember we arrived on set, started the song, and began the choreography with the male actor. At the end of the three-minute choreography, everyone was like, "Oh my god." The extras started to applaud, the team was impressed. It set the tone. Like: We're ready. We'll have a good shoot. We'll work hard. If we had something to prove, we proved it.

How did that make you feel to see all those extras clapping?

I was nervous. Then I was happy, then I was like, "Okay, now let's shoot it!" (Laughing) I still love that scene a lot.

A Conversation Between Anne Émond And Chloé Robichaud