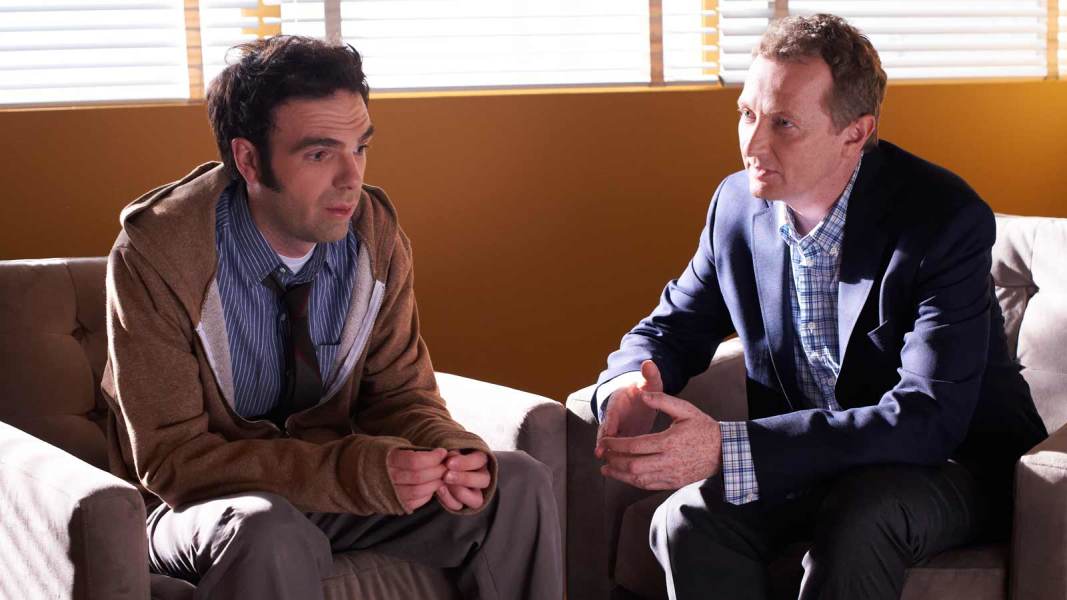 As best as I can recall, Michael: Tuesdays and Thursdays was born in a pub one night somewhere in the Distillery District in Toronto.

My friend, comedian and actor Bob Martin, and I would often meet for dinner there because it was the halfway point between our homes. He lived (at the time) in the Beaches, I live (until I die, which is hopefully sooner rather than later, but let’s not unpack that feeling right now) in the West End.

I’m a little hazy on the details, but I do remember discussing my history with mental health treatment (15 years of talk therapy) and the Cognitive Behavioural Therapy program I was doing at the time. Specifically, an exercise that had me asking strangers outside the Eaton Centre for the time. (Just picture me asking, “Excuse me, miss, do you know what time it is?”)

A few weeks later, Bob phoned me with news: He had inadvertently pitched a TV show to CBC about a therapist and his favourite patient, with whom he conducted CBT exercises. He apologized for not informing me about the pitch, and asked if I would like to be involved should the show move forward. 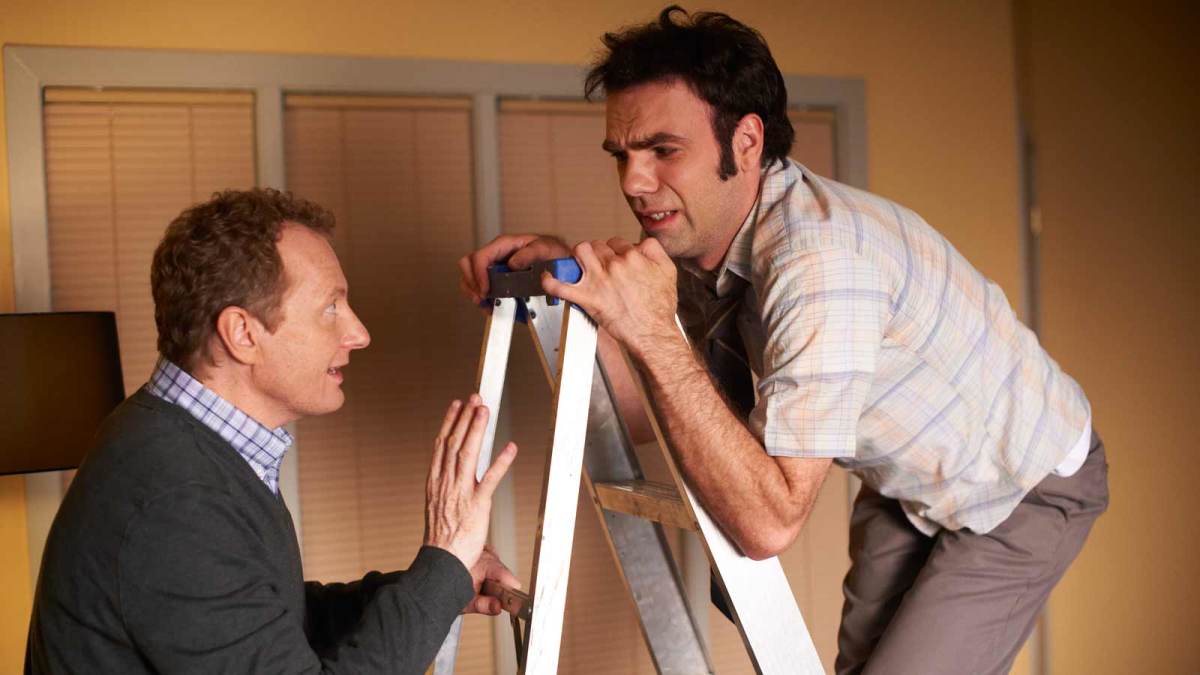 Michael (Matt Watts) climbs a ladder to conquer his fear of heights at the behest of his therapist (played by Bob Martin) in Michael: Tuesdays and Thursdays, which debuted on the CBC in 2011.

One of the things that intrigued me about the opportunity to play a character with anxiety was the chance to represent my struggles with mental health as an everyday, normal thing. Growing up an avid film and TV nerd, I was well aware of how psychological problems like mine had been portrayed. Films like One Flew over the Cuckoo’s Nest, 12 Monkeys, and Girl, Interrupted only showed life inside the INSANE ASYLUM. The Bill Murray/Richard Dreyfuss comedy What about Bob? may have portrayed someone suffering from crippling phobias somewhat accurately, but is, in reality, a horror story about a patient with boundary issues who torments his therapist. Seriously, watch it through that lens. It’s terrifying.

The film I love the most when it comes to dealing with mental issues is John Cassavetes’ A Woman Under the Influence. I’m not sure what Gena Rowlands’ character would be diagnosed with today, but I’m guessing that at the time it was “a nervous breakdown.” What a beautiful, painful, and grounded film about a woman struggling with her broken mind. That film makes me weep.

As a lifelong sufferer of generalized anxiety disorder, panic disorder, and bouts of depressive episodes, I’ve never been hospitalized. I have had periods that lasted weeks, sometimes months, where I’ve barely left the house for fear of debilitating panic, I also leave in my wake a series of failed relationships due to attachment issues. This fun, life-long disorder has impacted the course of my entire life. I never finished high school because of panic attacks in the classroom, I’ve never taken a job outside the city I was born in, I didn’t take public transit for years. (As a result, I’m an excellent driver! Everyone says this, just ask!)

Incidentally, I also have a fear of bridges, or being up high. One of the most unfortunate examples of this manifestation is my inability to access the bridge to get to the main theatre in TIFF Bell Lightbox. The place I feel most comfortable in the world is a dark movie theatre, but when I can’t even get up to the space… you know, things are tough.

Well, the CBC seemed to think so! In 2011, they ordered 12 anxiety-filled episodes of fun! That summer, despite my fear of flying, I crawled onto a plane to film the first season of Michael: Tuesdays and Thursdays in Ottawa. Bob Martin would play my longtime therapist and my best friend Don McKellar was even directing, to boot.

Two months in our nation’s capital: a city of beautiful but oppressive architecture with a pub on every street corner. What’s not to love? For someone terrified of every little facet in life, I was forced to face so many of my fears. (The list of my phobias is long, but to scratch the surface, beyond an overwhelming general anxiety: vomiting, heights, talking to strangers, small spaces, crowds, crowds in small spaces… I tackled almost all of these on Michael.)

The experience was in itself the ultimate exposure. When you have a crew of 30 people standing around, waiting for you to show up and do your job, you don’t really have a choice. I HAD to do it. Every day, for 12 to 16 hours a day (even 22 hours on one particular day), I did what was required to make the show a reality. (Apparently, my fear of disappointing others overrides my fear of being confined in a small space.) And it helped. So much.

Then, of course, no one watched the show, and it was cancelled. I won’t go into the details of the downward spiral that followed, but let’s just say I have some humiliation issues that resulted in me landing in a very bad, dark place, which left me even more incapacitated than I was before I started the project. Eventually, I became a huge advocate for alcohol as a way to self-medicate.

This year, the CBC decided to bring the show back, now christened Michael: Every Day. A new regime deemed it “the kind of show the CBC should be doing,” which I can only imagine is cable-like, smart, uhh... niche?

Which brings me to the present. Six new episodes of Michael have just started airing on CBC Sundays at 9 and 9:30pm, back-to-back. (You can even stream the first four episodes here online.) I think it’s a much stronger season than the first. We realized what would make the show more compelling would be to present the therapist and patient in a more “buddy comedy” type scenario (think Midnight Run), which (not to spoil things) is why the last two episodes are a road trip gone horribly, horribly wrong.

How audiences will relate to Michael: Every Day in today’s climate, I have no idea. But moving forward, I know I can be proud of the work that I did. I’m no Jack Nicholson, I’m definitely no Gena Rowlands, but I think I did my best in playing a person with a somewhat serious mental illness that people can relate to.

The world is getting crazier and crazier; anxiety and depression is on the rise. Do you ever get on a crowded subway car and think that you’re going to lose your mind? Probably every other passenger feels the same way. If I’ve learned anything through my experiences with anxiety and depression, it’s that you are not alone. We’re all in this together. We can get through this.

And watch A Woman Under the Influence. It will change your life.

After writing his piece for The Review, Matt Watts reached out to his BFF and collaborator Don McKellar for comment. The following is some friendly feedback from the director and executive producer of Michael: Every Day

Hey, It's interesting — some stuff I didn't know (the Distillery District? Hard to picture you there!) — but, if you want my honest criticism, I think you could go deeper. It all really boils down to a plug for the TV show. Shouldn't it have more film stuff? ​ Your summary of mental illness on film is a bit thin. I mean, What About Bob? What about Norman Bates? The Cassavetes is good, but Splendor in the Grass? Repulsion? Clean, Shaven? Spider? The movies are replete with depictions of madness. There's a whole damn film festival devoted to the subject in Toronto, for heaven's sake!

And what was your point in capitalizing “INSANE ASYLUM?" Are you saying that they have traditionally been depicted as loci of boldface horror? Why not a brief analysis of the "trapped in a mental institution" subgenre then... not just Cuckoo's Nest, but The Snake Pit, Shock Corridor? I mean this is for cinephiles, isn't it? They'd eat that up.

The heart of your piece is the bit about the show itself acting as the ultimate “exposure.” That's good, but don't expect film buffs to know that term. You might have to briefly define the basic Cognitive-Behavioural nomenclature. In fact, I'd go back to the origins of cinema and psychology, talk about how they basically developed in tandem, how the language of discourse about the two overlapped, then jump ahead to this century, talk about how psychology has evolved and how its application to film theory has to keep pace. End by positing a breezy stab at a new CBT approach to film theory. Could be fun.

Love the thing about the reception of the show giving you a breakdown. More of that. Talk about how the effort to reconcile your projected image to the construct of your self-identity brought you close to the source of all anxiety. This is straight-up Lacan and it might be worth a quote. I know that's a bottomless pit that you might want to avoid, but Lacan's name still has the power to strike dumb the most prickly of film snobs.

If I have any other brilliant ideas, I'll let you know. Beer tonight? When is this thing due anyway?