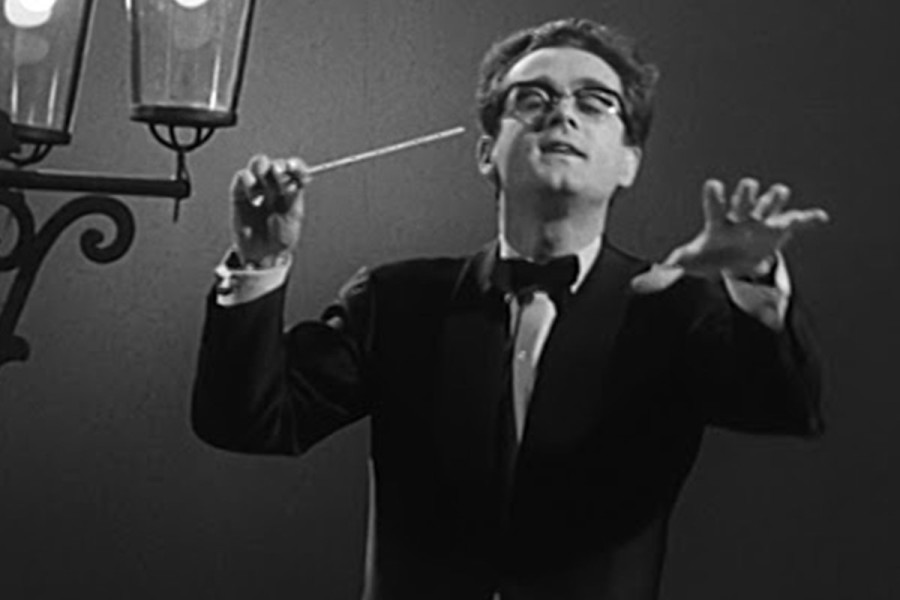 Legendary composer and three-time Oscar winner Michel Legrand passed away Saturday at the age of 86. The following piece was originally published on April 5, 2018, as part of TIFF's Agnès Varda retrospective.

In the ongoing series Deep Cuts, *Chris Cummings — a.k.a. Toronto chamber-pop sensation *Marker Starling — unearths some of the film songs, scores, and musical moments that have helped shape his love of cinema, and explores their afterlives beyond the film frame.

I’ll never forget the first time I saw Jacques Demy’s The Umbrellas of Cherbourg while I was still in university in the early ’90s.

At that time, the film wasn’t easy to see (the version shown to us was a projected laserdisc, I believe) and was regarded more as an interesting bauble than a masterpiece. But the emotional impact of the film’s hypnotic weave of story and sound on my youthful heart couldn’t have been greater. Umbrellas’ tale of the ill-fated love between Geneviève (Catherine Deneuve) and Guy (Nino Castelnuovo) — who are separated by the Algerian War, end up marrying other people, and are briefly (and bleakly) reunited by chance on a snowy night at an Esso station — summed up better than any film I had yet seen that period of life from carefree late-teendom through the tumult of one’s early twenties. (The late Nashville Scene editor and film critic Jim Ridley called it “an exaltation of life’s bittersweet balances and trade-offs".) It also fascinatingly combined a quotidian, true-to-life story with deliberate artifice, both in its use of music — it was a rare movie musical that was entirely “sung-through,” with every line of dialogue delivered in song — and its art direction, whose dazzlingly bright colours (which look “freshly minted from a rainbow,” as the BFI’s Samuel Wigley has it) bely the film’s darker hues and ultimately downbeat tone.

One major source of the film’s power is Michel Legrand’s perfectly calibrated score, which yielded two themes that became jazz standards of the era: “I Will Wait For You,” based on the most famous melody associated with Umbrellas, “Je ne pourrai jamais vivre sans toi” (”I could never live without you”); and “Watch What Happens,” derived from the film’s “Récit de Cassard,” whose title refers to the reoccurring character of Roland Cassard (Marc Michel), who first appeared in Demy’s rapturous debut Lola (1961) and in Umbrellas agrees to marry the pregnant Geneviève to save her petit bourgeois family from scandal. (Cassard’s récit recaps some of the narrative events from Lola — a moment perhaps too meta for 1964, as the film’s initial lukewarm reception would seem to indicate — and canny contemporary viewers might have recognized the melody as a callback to Legrand’s Lola score.)

The film’s sympathetic handling of Cassard (rather than making him a stock villain) attests to what makes Demy’s filmic universe so singular: no character is treated shabbily, none is present merely to serve a plot function. You can see Demy’s openness and generosity of spirit in this brief clip from 1964, in which both he and Legrand are interviewed: when questioned rather sternly about the unnaturalness of Umbrellas’ all-sung dialogue, he replies, smiling, “But I think singing is a natural mode of expression.”

Agnès Varda’s marvellous Cléo de 5 à 7 (made in 1962, the same year Varda and Demy were married) contains this scene in which Legrand plays the piano and sings — a glimpse of what the writing sessions for Umbrellas might have been like. (Given the more-than-close physical resemblance, one can’t help wonder if Legrand was the inspiration for Sesame Street’s frustrated Muppet composer Don Music.)

Of the many recordings of “I Will Wait for You,” one of the most affecting is Connie Francis' 1966 version; Monique Leyrac, meanwhile, recorded a beautiful French-language version in 1964 (the original lyrics, it should be pointed out, are written by Demy himself).

Astrud Gilberto turned in this characteristically introspective 1966 version arranged by the great Gil Evans, who is most famous for his collaboration with Miles Davis on Sketches of Spain (of which this orchestration is strongly reminiscent).

Cult crooner and now grand old man of the avant-garde Scott Walker is at his velvety best in this 1967 version recorded with The Walker Brothers:

Louis Armstrong made this emotionally resonant version in 1968, while a Cabaret-era Liza Minnelli gave her all to the song in this live clip from 1972.

Finally, Michel Legrand accompanies Nana Mouskouri and passionately sings the English lyrics in this clip from 1973, with some difficult and effortlessly executed harmony work at the end:

Turning to Umbrellas’ second standard, the writer of the English lyrics for “Watch What Happens,” Norman Gimbel, was a songwriter whose reputation as a lyric translator/interpreter had been made by his recent success with four hit Brazilian songs: three by Antônio Carlos Jobim (“The Girl from Ipanema,” “Meditation” and “How Insensitive”), as well as Marcos Valle’s “Samba de Verão” (“Summer Samba”), sung here by Astrud Gilberto:

It’s interesting how Gimbel was able to take the scene-specific lyrics of “Récit de Cassard” and turn them into something universally applicable while still retaining the spirit of both the scene and the movie. “Watch What Happens” seems to be a song about accepting another’s love and warming to someone, as Geneviève does when she agrees to marry Cassard, but cast here in more general terms: “Cold, no, I won’t believe your heart is cold / Maybe just afraid to be broken again.”

Sarah Vaughan is accompanied by Legrand himself in this live clip from 1982, one of many times these two titans collaborated:

Montreal's own Oscar Peterson proves why he was the envy of so many pianists in this 1974 live version:

And Lena Horne absolutely kills it in this 1973 clip:

“I Will Wait for You” was nominated for an Oscar (losing out to John Barry and Don Black’s “Born Free”), and Legrand subsequently became Hollywood’s go-to composer for a certain kind of schmaltzy yet haunted romanticism. Four years after Umbrellas, Legrand took home the Best Song Oscar for “The Windmills of Your Mind,” written with frequent collaborators Alan and Marilyn Bergman for Norman Jewison’s Steve McQueen–starring caper The Thomas Crown Affair; here it is, sung by Noel Harrison, accompanying Pablo Ferro’s dazzling title sequence from the film:

Working again with the Bergmans, Legrand composed the indelible (and also Oscar-nominated) “What Are You Doing the Rest of Your Life?” (sung here by Michael Dees) for the little-remembered 1969 film The Happy Ending:

Legrand received yet another Oscar nom for 1970's “Pieces of Dreams,” sung here by Shirley Bassey:

Legrand hit it big in 1971 with the theme from Summer of ’42 (which seems to borrow heavily from Umbrellas), covered here by Peter Nero, but that same year he proved he could also deal effectively with more sombre material, as in the enchantingly austere theme from Joseph Losey’s The Go-Between:

Legrand had another hit with “The Hands of Time” from the TV movie Brian’s Song (sung here by Johnny Mathis), and he was also responsible for the manic score to Orson Welles’ fabulous 1973 swan song F for Fake:

Ten years later and 19 years after Umbrellas, Legrand and the Bergmans were Oscar-nominated twice in the same year for Barbra Streisand’s Yentl, proving that Demy’s masterpiece still cast a long shadow:

But it was Demy with whom Legrand worked most often, providing songs and music for the brilliant Umbrellas follow-up The Young Girls of Rochefort (1967), as well as Donkey Skin (1970), A Slightly Pregnant Man (1973), and Lady Oscar (1979).

It is poignant to note that in the years since Demy's untimely death in 1990, his place in the pantheon of auteurs has been restored, but during the later years of his life he struggled to find suitable projects. While Legrand was rewarded with multiple Oscar nominations, Demy faced a series of diminishing returns — one can only wonder what, had he lived longer, an upturn in his career might have looked like.

The World of Jacques Demy