All the spherical foods, all the cinema

Canadian filmmaker Larry Weinstein is well-known for his prolific output of music documentaries over the past 35 years. His eccentric 2006 film Mozartballs plays July 5 at TIFF Bell Lightbox as part of TIFF's ongoing free Canadian Open Vault series. Preceded are two of Weinstein's mini-documentaries, the comic Burnt Toast: Forever and Ever and his Oscar-nominated short, Making Overtures: The Story of a Community Orchestra. Larry took some time out of his schedule to talk about Mozartballs, as well as his life and career, while dining on some of his favourite, spherical-shaped foods. To quote Larry: “Edible orbs have played a big part in my life.” 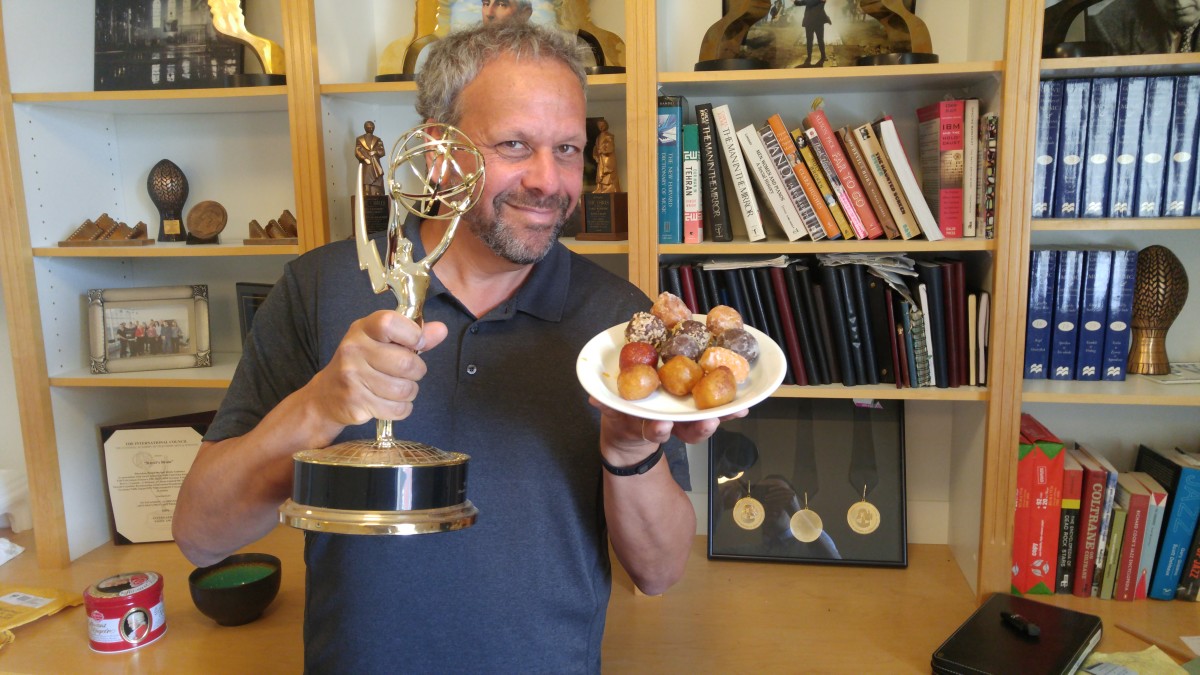 YOU’RE A TORONTO NATIVE. WHAT WAS IT LIKE GROWING UP IN TORONTO?

Growing up in North York in the ‘60s was boring. I think this contributed to my imagination because my reality was not that interesting. There was a lot of fantasy and fantasizing about imaginary worlds. I think that led to me wanting to be a filmmaker.

My first job was as a gardener in a cemetery. In February of 1974, Tim Horton died because he drove his very expensive European sports car into a wall between Toronto and Buffalo. One of my jobs was to take care of his grave.

But what was really gross to me was that, at exactly the same time, the Tim Horton’s donut people introduced the concept of Timbits. And the Timbits they had at the beginning had a lot of strawberry jam in the middle. Very bloody looking. Being the immature kid I was, I would buy these things with my friends and we’d throw them at windshields of passing cars to see the splashes of red. It was a sort of a weird homage to the death of Tim Horton.

Years after I finished that job, I went back and finally saw Tim’s tomb. I assumed it would be donut-shaped, but it isn't. And I thought, “Oh, in the Jewish tradition, I'm going to stop by Tim Horton’s, buy a bunch of Timbits, and place them on top of his gravestone.” 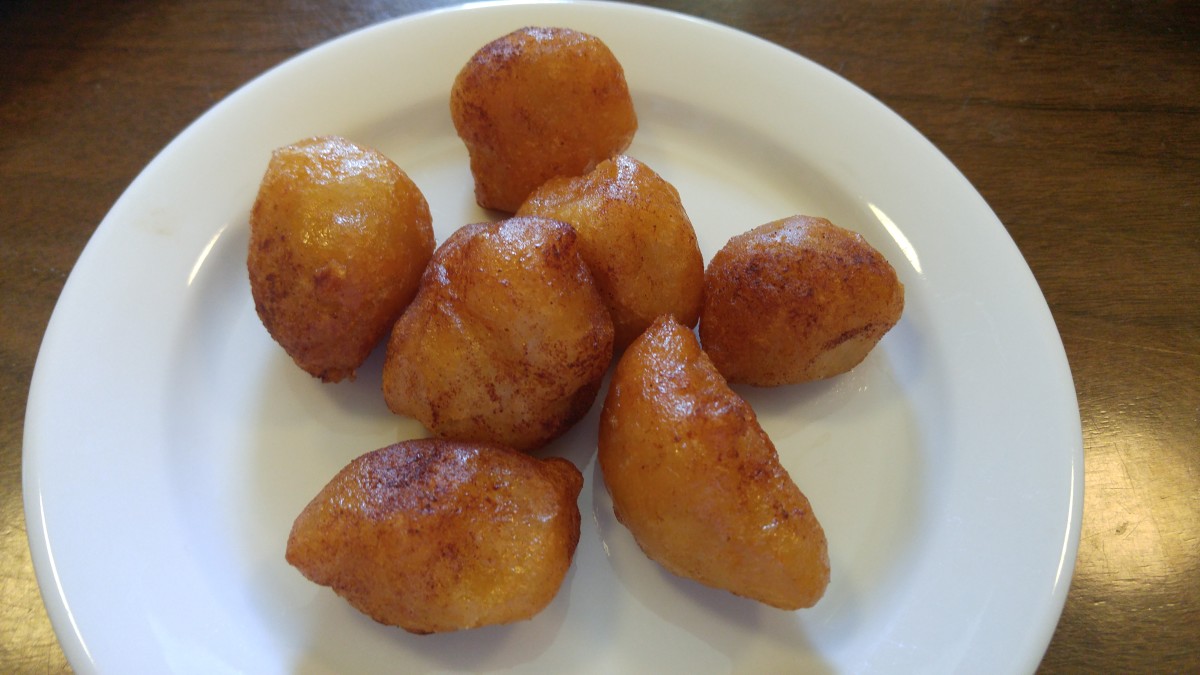 Loukoumades, Greek honey balls, quite seriously, have had a major effect on my life. When my wife Mary and I wanted to buy a house in 1982, we wanted a Toronto neighbourhood that had some sort of ethnic background and a real feeling of community. Mary wasn’t sure about the Danforth because her parents are Macedonian-Greek and when they arrived in Canada in the ‘50s, they lived in that area and worked very hard to get out of there. But then we went to Athens Pastry, where there is the most perfect spanakopita, tiropita and loukoumades. We ate them and thought, "this is where we have to live."

CAN YOU TALK ABOUT HOW YOU STARTED OUT IN FILMMAKING?

I was very lucky. At Earl Haig Secondary School there was a course called “The Silver Screen.” We’d watch Citizen Kane and other great films, and then we were given a Super 8 camera. I got to work with a bunch of kids in my class and we made a spy spoof called The Brief Case, or The Short Mission. It was a pun, obviously. I didn’t have to explain that.

The next year I took a media class and we were supposed to write essays, and I asked the teacher if I could make a documentary film instead. I had become a vegetarian and I wanted to make a film about a slaughterhouse in order to reinforce my decision. So I ended up shooting a film about a slaughterhouse in the old meatpacking district in Toronto. I was covered with blood and intestines and I stank so much, but I loved it, because they were great shots.

I set a piece by Claude Debussy (“Snowflakes Are Dancing”) to images of the cow being killed with the bolt in the temple, and the slitting of the jugular with the blood pouring out. Back then, cows were usually pregnant. So they were ripping out the stomachs and the unborn calves, which I shot in slow motion, set to really beautiful music. It really cemented my love for images and music. So that was my first documentary, and a lot of people in my high school became vegetarians for days or weeks even after seeing it.

HOW DID YOU CONTINUE FILMMAKING FROM THERE?

My big sister Judi told me that everyone has to choose their profession by the time they’re 16. So my plan was to go to film school. I went to York University. But I wasn’t a great student. I met Niv Fichman and Barbara Willis Sweete while at York. They were one year ahead of me. I didn’t know that they were starting a partnership after they made their first film — a music film called Opus 1, Number 1. They hired me probably because I had lied to them. I said I knew everything about cameras, sound equipment and editing equipment. But they ended up liking me and got me to production manage and do publicity for their films at Rhombus Media. It took a long time before I got to direct a film, though. 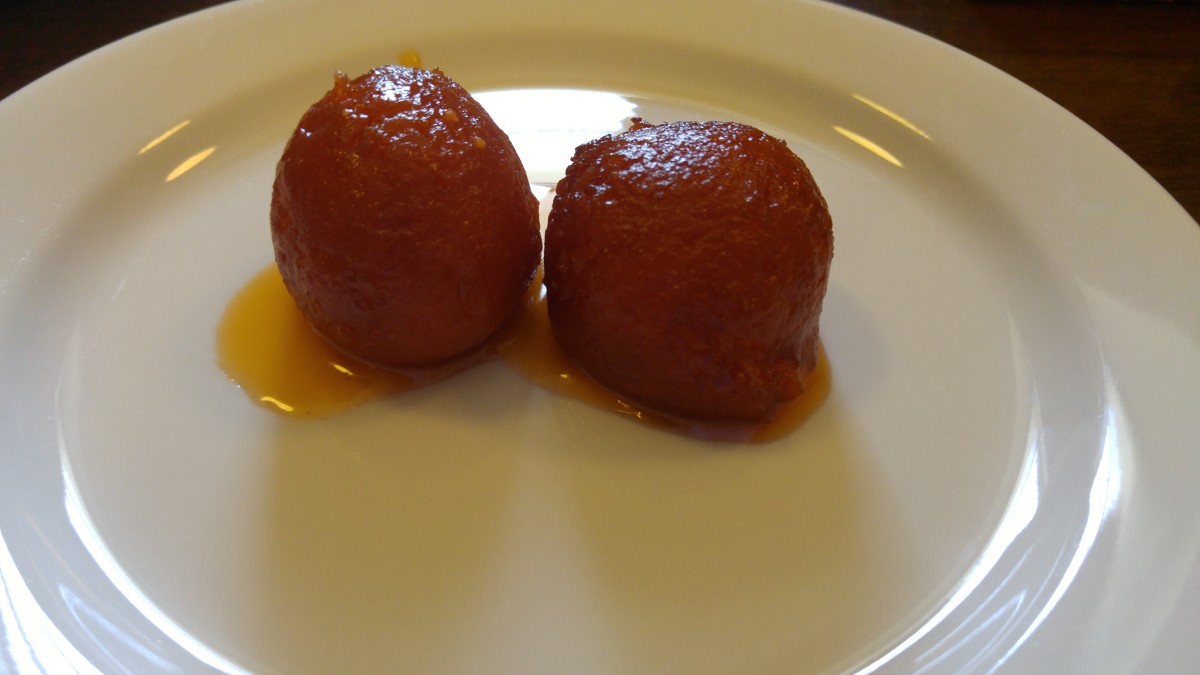 TELL US ABOUT YOUR FIRST FILM MAKING OVERTURES.

That was my first solo directing gig and it was about a community orchestra in Cobourg. I was very nervous. It felt like so much responsibility. But it was a wonderful, human experience. It did well in festivals and it was eventually nominated for an Oscar. And I feel like making the film is totally linked to my Indian food obsession. Mary had introduced me to Indian food. No doubt my energy to create my first film came from the syrupy Indian orb called gulab jamun. Had we won the Oscar, it would have figured in the acceptance speech.

WHAT WAS IT LIKE BEING NOMINATED FOR AN OSCAR?

I had no idea at first that it had been nominated. My daughter, Ali (now a documentary filmmaker!) had been born four or five months earlier (conceived after an Indian meal), so when people were calling to congratulate me, I thought they were congratulating me on my daughter. My first reaction was a really weird one because I thought, “Oh my God I'm going to have to go to Los Angeles for this and I don't want to be away from my baby.” But then I thought, “This is an Oscar nomination. It's not going to happen again in my lifetime, I should just enjoy it.” So Barbara, Niv, and Mary, my wife and I all went down and had an amazing time.

The problem was when we got down there, people took Barbara (the producer) and me aside and said, “I was on the jury of your film. I've never seen such strong reaction to a short documentary. You’re going to win for sure.” People loved it and started giving us advice on what to say and not to say during our acceptance speech. And then it didn't win. So what was an incredible honour was suddenly a disappointment. I stormed out of the auditorium, just because I was so depressed. But after I regained my composure I just had fun with it, talking to Steven Spielberg, F. Murray Abraham, Sônia Braga, Sally Field, Mel Brooks and Anne Bancroft at the time. Niv urinated next to Bob Hope.

DO YOU REMEMBER WHAT IT LOST TO?

Yeah, of course I do. I was bitter. It was called Witness to War. And I thought, okay, in order to win an award, you can't name your film The Story of a Community Orchestra, you have to have the word 'war' in it. So later I did a film called My War Years, and then I did a film called The War Symphonies. It didn't work though — no Oscar. Actually, The War Symphonies won an Emmy Award, so that's not bad. 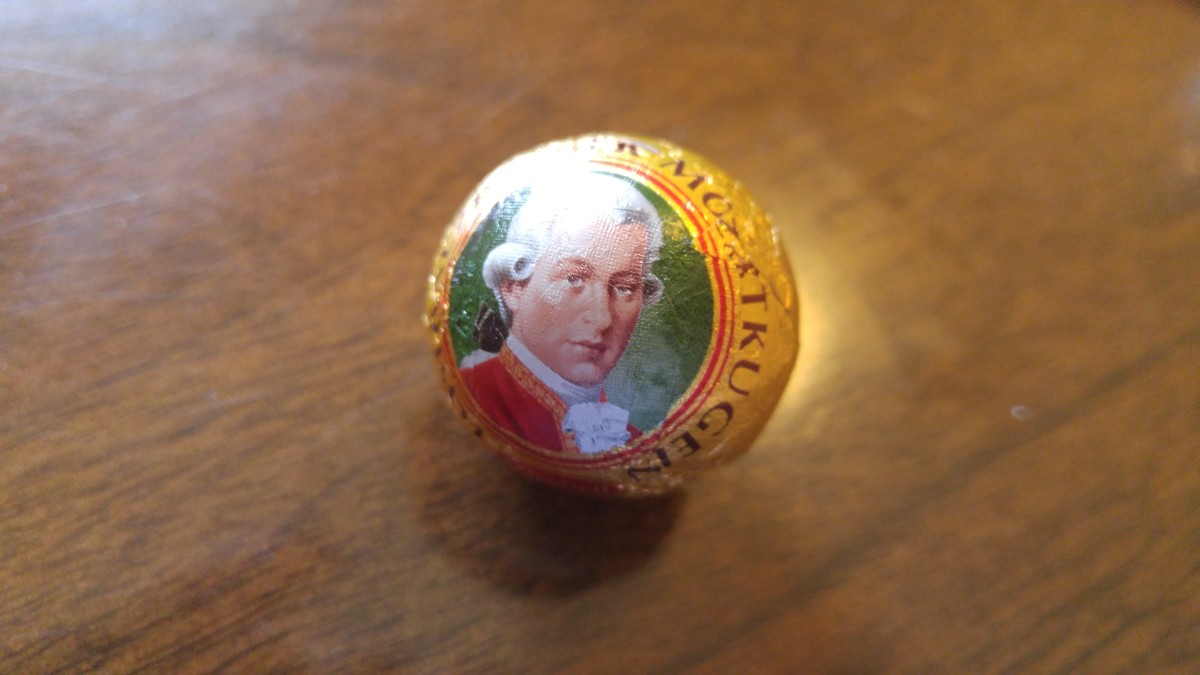 FOR THOSE UNFAMILIAR, WHAT ARE MOZARTBALLS?

Mozartkugeln, literally Mozartballs, are balls of chocolate with layers of almond, pistachio and hazelnut. Apparently in 1856, there were several competing companies who created these special chocolate balls in Salzberg, the birthplace of Mozart. And a lot of them say they are the original Mozartball, and it’s like, what the hell — Mozart never ate these things. What is this “original” thing? I’ve had Mozartballs from maybe nine different competing companies who all claim to have the original recipe.

CAN YOU TELL ME ABOUT THE PROCESS OF MAKING YOUR FILM, MOZARTBALLS?

I had already made the films Ravel’s Brain and Beethoven’s Hair, and thought it would be fun to make Mozartballs and call the three films my “Body Part Trilogy.” It was 2004 when somebody from Arte in Germany came to me and said there’s going to be a lot of films released out of Europe in 2006 because it will be the 250th birthday of Mozart. And they’re going to be very serious and very reverent, so why don’t you do something fun?

I said right then and there, “There’s all these companies that make these Mozartballs. Maybe it would be fun to do something based on that.” After that, it became a film about eccentric people who had Mozart obsessions in one way or another, like an astronaut who went up in space with these little Mozart chocolate balls, a man who had this computer program that composed original Mozart compositions for large ensembles in one-fourth of a second. And then there was a man from Switzerland who wanted to take his own life, but he loved Mozart and went to his grave and heard Mozart speaking to him, giving him inspiration to continue living.

But probably the most interesting people in the film are Steph and Lynette. Steph is a woman who believes she is Mozart. Not the reincarnation of Mozart, but actually Mozart. That Mozart’s spirit up in the heavens stepped into Steph. And she started a website in and spoke in Mozart’s voice, and this woman, Lynette Erwin, believed that she was the reincarnation of one of Mozart’s lovers. So they reunited. Except Lynette thought she was dealing with a male, not realizing it was a woman. But it was too late — they fell in love. So Lynette left her family and Steph moved in with her. So I decided to take them to Vienna to relive their memories from… 1787.

They’re wonderful people. I’ve stayed in touch. I really, really like them a lot.

The truth? They’re pretty sickening. But Mozartballs had a lot of magic. It was wacky and was really fun to do. A lot of filmmakers have told me they were really influenced by its approach and its interweaving of characters and the tongue-in-cheek tone. That’s something that matters to me a lot. I don’t like subjects that are just serious. I find the process of filmmaking needs to have some joy in it. 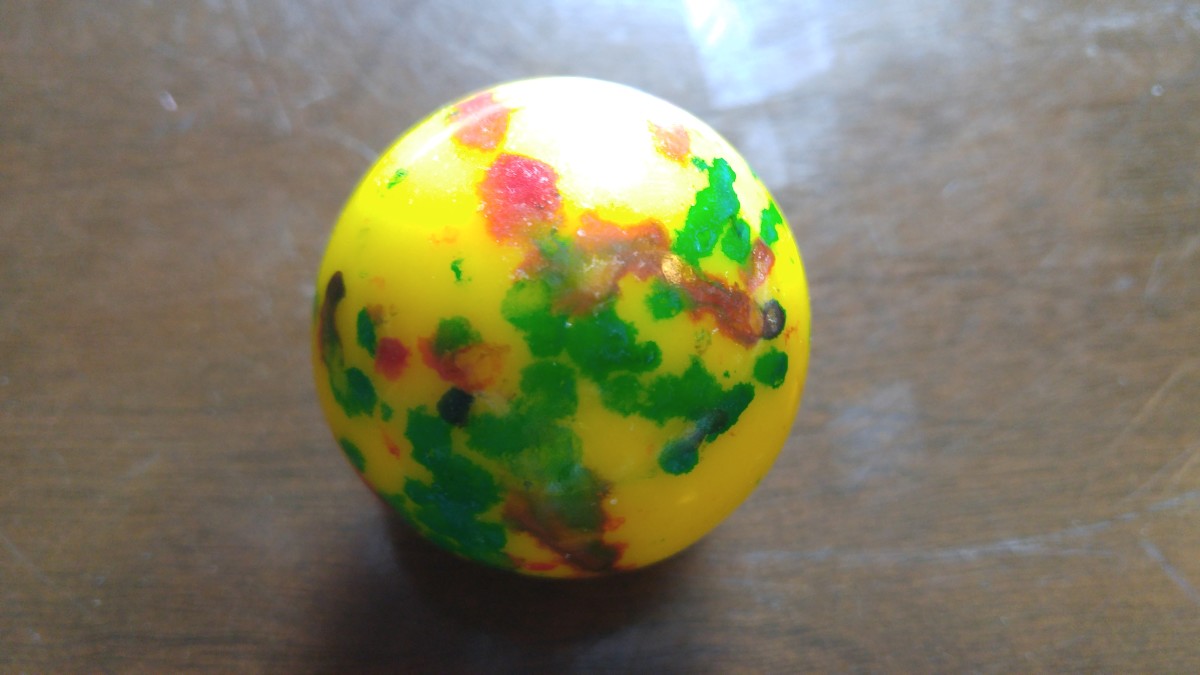 WHAT ARE SOME OF YOUR OTHER FAVOURITE SPHERICAL FOODS?

As a kid I used to love chicken balls, which will be featured heavily in one of my next films, The Jews Who Stole Christmas. I mean, that's the working title. It's about all the Jewish composers who wrote Christmas songs.

I’m terrified of jawbreakers because you suck them and they turn colours like magic. But at one point, you get bored and you bite. I really damaged my teeth on a vengeful jawbreaker that I bit into 45 years ago, and have never really quite recovered.