“A Revolution of the Mind” 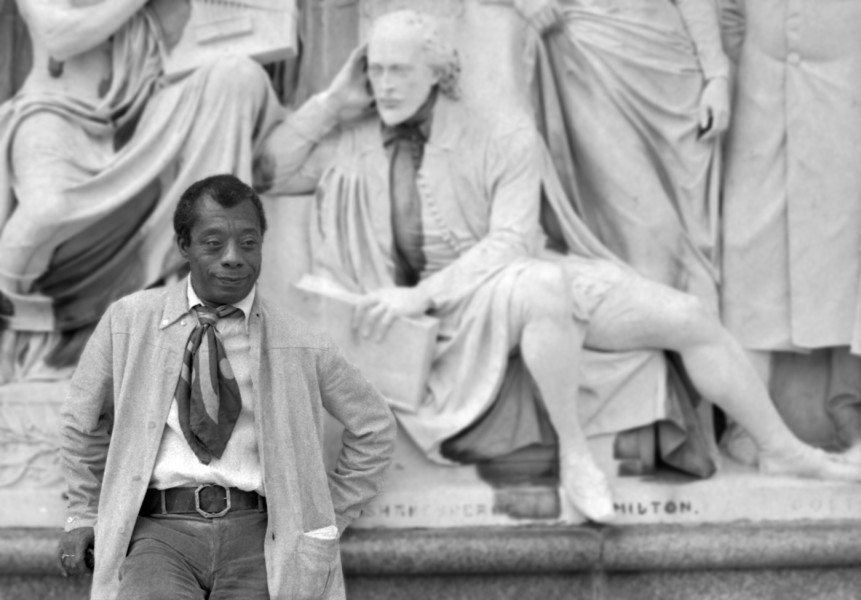 Thirty years after his death, James Baldwin’s fiercely incisive writing, thinking and speaking about racism in the United States (and the world) feels all the more painfully relevant. As we celebrate Baldwin this February with two essential films, Karen Thorsen’s award-winning 1989 documentary, James Baldwin: The Price of the Ticket and Raoul Peck’s stunning new essay film I Am Not Your Negro, TIFF Artistic Director Cameron Bailey sat down with Canada’s Poet Laureate George Elliott Clarke to discuss Baldwin’s life, work and legacy.

Cameron Bailey: There's so much I want to ask you. We're opening Raoul Peck’s I Am Not Your Negro on February 24, and I know that a lot of people will be coming to James Baldwin for the first time. I did an English Literature degree at Western [University], and I had to find Baldwin for myself — it was not on any course curriculum ever, any syllabus. How should people recall him in 2017?

George Elliott Clarke: I think that Baldwin was a champion of several struggles around citizenship and identity. It is important to realize that he was a pioneering voice as a gay writer, of course as a Black man, as a believer in civil rights, civil liberties. Also, in terms of understanding the psychology — which he rightly saw as sexual — around the oppression of Black and Brown people.

He saw himself in a line of dissent with someone like Richard Wright, whom he famously excoriated in a 1949 essay called “Everybody’s Protest Novel” (he’s referring to Native Son). At the same time, he is a literary son of Richard Wright, carrying on a protest tradition. Baldwin found greater freedom to write openly about all the facets of his identity by going to Europe, and ultimately to Istanbul. You can almost see him as being a precursor to an Obama consciousness around race and the complexities of it.

CB: I wanted to ask you about that tension between being a novelist — an artist — and an activist. Some divide Baldwin's work into fiction and prose. For you, are these two Baldwins, or is this one mind?

GEC: I absolutely think it’s one mind, one that has been formed by Black evangelical fervour in the streets of Harlem in the 1930s and 1940s. At the same time, it’s tempered by a great love for the language of the King James Bible, as well as the language of Henry James — the language of other white American writers who Baldwin saw as carrying this great oratorical tradition of phrasing, and vastness of imagery. He wanted to understand the ways in which American traditions of racism and imperialism impinged upon the larger Black and Brown worlds. I think it's important to recognize that Baldwin was a mind who travelled: he's someone who begins with the Bible in a storefront church in Harlem, but ends up in the salons of Paris.

CB: He was preaching from childhood, essentially.

GEC: He was gifted. He was seen as having that ability to uplift and transfigure the lives of others through his sermons. At the same time, he ends up travelling through Europe much like one of his literary heroes, Henry James. He learned how to see himself through the eyes of Europeans, which is partly a racial gaze, but also, the gaze of Europe towards America — this time, towards an African American.

CB: I wanted to ask about the role of race in the United States, the symbolic level that Baldwin thought and wrote about. In [Peck’s] film, Baldwin talks about "the nigger" as an invention of white people. White people needed a symbolic figure in order to project all their fears and hatred onto.

GEC: That's absolutely true. I think that idea of "the nigger" as being a scapegoat, one who carried the projected sins and fears of white Americans and, to a certain extent, white people in general. Europeans also looked at this figure, in terms of the Blacks from the Caribbean, or Blacks from Africa. You can see Baldwin working through the ideas in Frantz Fanon’s Black Skin, White Masks. Why is it that the Black has to carry this psychological burden on behalf of whites? They imposed upon the Black all the images of degradation, impoverishment, inferiority, intellectual inferiority, as a means of justifying white supremacy. We have to understand that Baldwin was making a tremendous intervention during the Civil Rights era in the United States. He took images of Black degradation and tried to explain why they happen, where they come from, by applying a racialized sexual reading of the origins of these tropes. It shows up in Blues for Mister Charlie, Going to Meet the Man, especially the last story in that collection. It shows up in Just Above My Head, Tell Me How Long the Train's Been Gone ...

CB: It's in so much of the work. One of the things I'm interested in, in the context of I Am Not Your Negro, is Baldwin's interpretation of a symbolic world that Americans walk around in: the world where whiteness and Blackness existed in opposition and they have value judgements [attached to them]. This was the 1960s, the Civil Rights era, a time when those symbolic aspects were being played out on the streets and on the bodies of African Americans. To move from something that exists primarily in fiction to his decision to work as a public intellectual... He was on The Dick Cavett Show, for God's sake! How do you think Baldwin saw his role of translating the symbolic language of race to the actual lived experience of people?

GEC: It was his life's work. He moved amongst different worlds. He had the street, which connected him to a figure like Malcolm X. He had to be able to speak to that side of Black America, or Black existence; that's the side that attended those church services in Harlem, for crying out loud! Then there was the foreign world of Europe and European intellectuals, especially existentialism, which was really big in the ’30s and ’40s. Baldwin would've moved in those circles with Richard Wright, Simone de Beauvoir, and Jean-Paul Sartre. He was trying to think through the Negro dilemma, the Black dilemma, through existentialist frames of reference, like Frantz Fanon. But at the same time, he was coming from a Black intellectual tradition…

GEC: (Laughs) At the same time that the Civil Rights movement was unfolding in the United States, we've got worldwide global decolonization going on in Africa, Asia, the Caribbean ... and to a certain extent, South America. Right here in Quebec, the Quiet Revolution was itself a form of decolonization.

Baldwin becomes the apostle of decolonization, in terms of pointing out how you can't have real equality until people come to terms with their own sexualized feelings of repression, inferiority, and puritanism. The goal of liberation requires a rethinking of all these parameters of the self. As Black people acquired the right to vote through a violently opposed struggle, their bodies and their minds needed liberation as well. I put Baldwin alongside Malcolm X and Martin Luther King, Jr.: he brought about a revolution of the mind and a projection of the self forward.

CB: At the same time as his intellectual revolution was taking place, he was someone who grew up on classical Hollywood cinema — everybody went to the movies in the ’40s and ’50s. Baldwin writes about cinema in The Devil Finds Work. (Holds up book) This is my copy from 1992 that I bought when I was first discovering Baldwin. For me, as someone who was interested in both literature and cinema, it was fascinating to see Baldwin take on the role of film critic. When he wrote about film, it wasn't just as someone analyzing the technique of cinema: he was writing from the experience of sitting in one of those movie houses with the giant screen, projecting life back at you. It was idealized life, seen as a little Black boy and the experience of taking all of that in. How classical Hollywood cinema idealized whiteness, and how he received it as a little Black boy, was fascinating to read.

GEC: It's interesting that title, The Devil Finds Work. I think it is significant, partly because of his preacher background. What I imagine is that little boy sitting in that darkened cinema, looking at the silver-white screen. All those idealized white images were perhaps in the back of his mind, providing fire-and-brimstone critique.

CB: It's how anyone marginalized has to watch movies. You watch it from a point of resistance.

GEC: You cannot take these idealized visions at face value, no pun intended. It has to be critiqued. It shows up in his essays on the Harlem race riot of 1943 in The Fire Next Time. I don’t want to get in any trouble, but just for the sake of thinking out loud... you can think of the classical expression of the national state of Islam as a deliberate inversion of Hollywood imagery.

CB: Ooh, that's bold! All the myths of Hollywood in the western, the romantic film, the musical ... they're turned on their head. 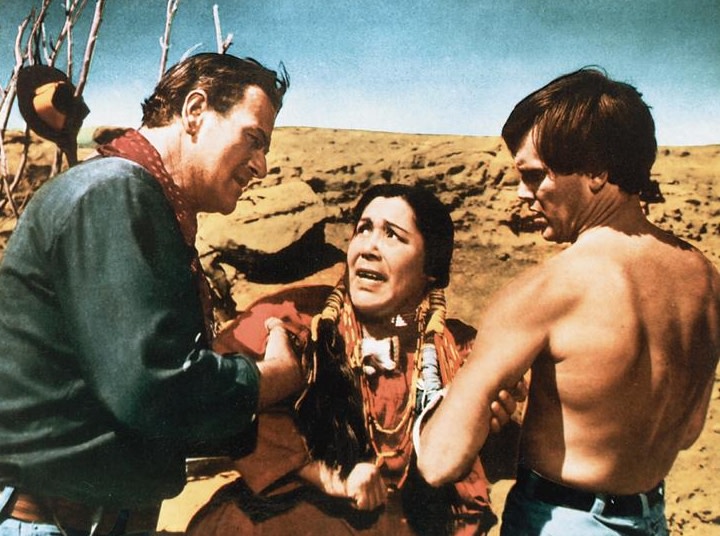 "Any black man who saw the world through the eyes of John Wayne wouldn't be a hero, but a raving maniac."—James Baldwin

GEC: Exactly. The Birth of a Nation being reviewed by the Nation of Islam! Baldwin would've been very cognizant of the power of that critique. Think about a novel like Giovanni's Room, where the hero is white. Here's Baldwin, daring to project his psyche through a white male character’s exploration of homosexuality. Then, to understand that portrait as being a portrait of America itself — of all the lies America has told itself about race, sex, and class, for that matter.

CB: James Baldwin died 30 years ago, he was writing 40 years ago. Yet I Am Not Your Negro is about now as much as it is about then. Raoul Peck does some miraculous work, not just in getting Samuel L. Jackson to read Baldwin's words aloud, but also to stitch Baldwin's words to contemporary images: Black Lives Matter, what's going on right now in the US. In fact, it's only gotten worse since this film was finished, because we have an administration that has essentially fanned those flames even higher. What do Baldwin the activist and Baldwin the artist have to say to our current lived experience?

GEC: That's a great question, partly because Baldwin took so much heat. A lot of critics, some white critics in particular, felt that his art suffered because he was willing to be a public intellectual. He was willing to walk in the Civil Rights marches, to put his body and his artistic reputation on the line.

Personally, I believe in the freedom of the artist. At the same time, Baldwin calls us to witness the enterprise of artistically recognizing injustice. He boldly wields the gifts of critique, interpretation, and simple expression in support of a liberationist ethos. And through his own example, no matter what, this is what the artist is called to do. We might even say this is what the Black artist is called to do.