Steven Johnson fights (video) pirates during a volunteer shift at Scotiabank, goes to class late, and sees Iggy Pop at a screening of the Stooges doc Gimme Danger 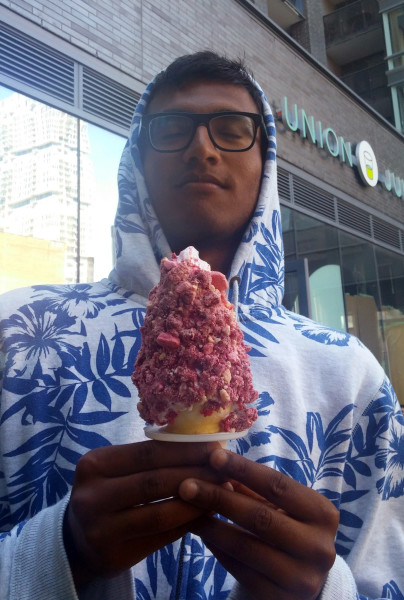 I’m attending Ryerson University for my very first year. TIFF begins in tandem with the school year and since the Ryerson Theatre screens TIFF’s films during the Festival, it has a big presence on campus. Starting in this new place, I’m immediately aware of a passive loneliness, attacking most of the people around me… That being said, TIFF is the only thing that's familiar to me.

Following Deepa Mehta, you need to know what you’re getting yourself into. Hi, my name's Steven Johnson. I'm not famous, or really know anyone that is famous. In fact, of all the people whose stories you'll be able to read about, I'm - to take one from the kids - a pretty basic bitch. (Yeah, self-deprecation is somehow fashionable?) Anyway, I study Film at Ryerson. My personality is an amalgam of all the characters I've seen in movies, which makes me hard to pin down. I'm inconsistent like that.

12AM: Worked on school stuff, due in the next nine hours. You might assume with all this time on my hands, I could read some books for a few hours a day and not be behind in my classes. No, you're wrong. HOLD UP! Let's go back to Tuesday night. Somehow five minutes to midnight, I crossed paths with Chandler on Church and Gould. We were both riding our fucking cool bikes. And I was like ‘sup? And she was like ‘sup? (Editor’s note: Was biking to a Midnight Madness screening, can confirm that both of our bikes are cool and we did indeed say ‘sup.’)

I worked until 3AM, at which point I went to sleep. Thankfully “Cait... With the freckles” woke me up from bed at 6AM. That's so nice.

6AM to 9.30AM: I finished working. Then crammed food down my throat.

9.30AM - 12PM: I rushed to class disheveled and 30 minutes late to a 9AM class. (That’s Ryerson time though.) I probably offended a professor I respected. “Burn those bridges” is my motto.

12PM - 1.30PM: I ate lunch. “Jared... with the eyes” and I talked film-stuff. I can remember, “Steven, you should watch Dear, Zachary. OK! Also, he started explaining how filmmaking...involved...temp tracks as supplement to scoring....control of a composer. I was fascinated. I should watch Every Frame a Painting’s new video. And ChannelCriswell’s.

“Alejandro...with the sick specs” and I swapped horror stories, just laughing and talking about Festival and other happenings. My new pair of glasses portrays me as Martin Scorsese's illegitimate love-child during those fun times in the ‘80s. My only criteria toward the salesman: a pair of frames and lenses that won't break if I get hit in the face. It happens a lot more than you might imagine. Since I couldn't see my reflection modelling these glasses, I took the clerk's word for it. Moral of the story: Don't spend your childhood glued to a television screen, your eyes will degrade by 10 per cent yearly. Or do, I can testify it's really fun.

Both of us were assigned theatre positions, but we had an hour to kill before 3.30. This mostly consisted of discussions about filmmaking, finally getting that ice cream cone from Sweet Jesus I've been promising myself since last August. Alejandro recently completed a short, which I thought was really cool.

Coming back to Scotiabank, I ushered, Layla M., concidently in Cinema 10. Out of the 400-plus films screening, I worked on the one film tagged by NextWave. The 2016/2017 committee is pretty impressive. I wish I saw it two months ago when the rest of the committee had tagged it. During the screening, I had my eyes out on audience members who might film the film. Bloody pirates. So uncool. I also had to illuminate the path for potential walk-outs because hey, people trip. It's dark and tight. The film was strong and terrifying. I have tickets for Saturday 17 at 9.45pm. Check it out!

I took a breather, it was getting claustrophobic. Gabby was outside. She taught me how to moonwalk; we talked about summer camp and I made a super dark joke that a normal person would look at me sideways for doing. (Again, TIFF is anything but normal.) After the film we returned to the volunteer room to get reassignments at other locations. But, TIFF being the friendly festival, there were too many volunteers eager to help and not enough to do. Frankly, we were on point. We left early. Finally that nap!

6.30PM-ish: Well, not so much actually. I reflected, realizing my life was boring as fuck. It consisted of reading books. Writing. Running errands. Going to school and hanging out with a small group of new friends. I was fucked, following Deepa Mehta. It's not a competition. But I'm here representing every volunteer at this bloody amazing festival. And sure as hell, I better do a good job. Even my roommate, a freakin' Computer Science student saw more celebrities than I had. Somehow, he got cut off by Kylo Ren/Adam Driver and his posse. Plus, he also got shots of Sigourney Weaver.

Marc and I ate. At that point, I realized I had to do something awesome tonight. Something noteworthy. I had four blank tickets for four friends to one as-of-yet unnamed film that I had to watch in the next two hours. I messaged “Kenny the Camera Guy,” he was in. Jared was in for a party too. But he was going to a photography gallery at Ryerson's Image Arts Building. We caught up with Cole and walked on. Still considering which film to see, we walked past a line for Gimme Danger at Ryerson's Theatre. And that was that.

8.30PM: I think we crashed a party. It’s been my second time crashing. Everybody was all fancied up, while the three of us were dollied up in jeans, running shoes and Jared with the sexy beanie. Talking about anything but the pictures, yet all about them, we couldn't really take it in. Photography's such a miscellaneous art I can't typify my relationship with it. We missed the student exhibit by 20 minutes. I split with Jared and Cole, deciding we would watch Gimme Danger without telling them. Smart. We then picked up Kenny five minutes before the film started and ran to the theatre. He cramped up bad. Sucks, when I invited Cait she was busy working. When we got into the theatre, I smashed through the door just when Iggy Pop and Jim Jarmusch walked onstage to introduce their film. Like everyone, I hollered and yelled and attempted to imitate a “Megaclang” clap. 10 minutes later, Jared and Cole came and the four of us watched this amazing film about the FUCKING stooges! It was, you know... cool. I'm not gonna ruin it, except by saying that Iggy Pop is one wild dog. Let me be your dog. 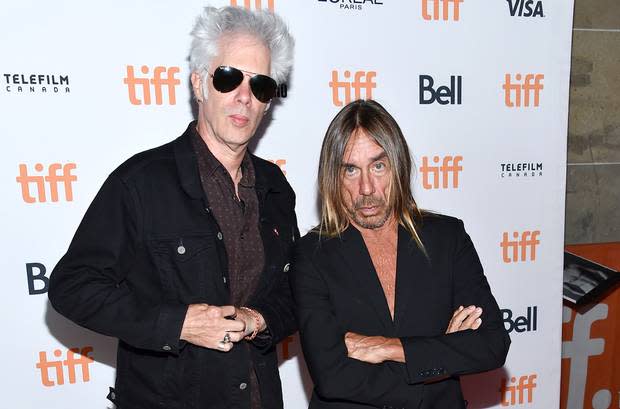 During the Q&A, they came out again. Iggy was killing the audience with his sense of humour. And Jim was talking about how he got in on this project, and his relationship to the Stooges' music. Jim had all these ideas about the film, not interviewing all these other clowns who weren't involved with the artistic growth of these angry rockstars. After all that, I was beat. Time to sleep.

11.30PM and onwards: Kenny and I went home. I spent the next two hours writing the rough copy of this. Jared and Cole wanted to check out Iggy and Jim at the side exit. Last year, I met Deniz Gamze Ergüven and got her to sign my ticket for Mustang. Good stuff. Little braggart. A day in the life of Steven Johnson. Read this again listening to “A Day in the Life” by The Beatles on a constant loop.