On her day at TIFF, Anna Swanson stands next to Atom Egoyan at the Member’s box office, ugly cries in Lion and catches two Rooney Mara movies 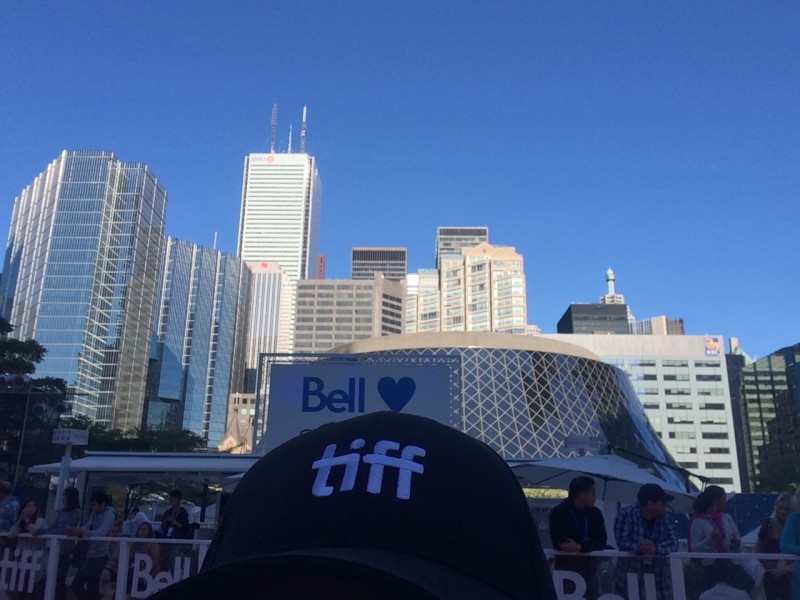 Early on in the TIFF 16 film City of Tiny Lights, a character states that “a lot can happen in eight hours.” After spending my day at TIFF watching three movies, I’m inclined to agree. But before I get to that, it’s time to recap TIFF day 9 from the beginning.

12AM: Tonight, unlike every night of the past week, I’m actually in bed and ready to go to sleep before midnight. After spending most of TIFF barely sleeping, I promised myself that Thursday was going to be my day of rest. I only went to one TIFF event, the red carpet for The Secret Scripture where I was lucky enough to get my Girl with the Dragon Tattoo DVD signed by the one and only Rooney Mara. (If you knew me, you’d know this was pretty big deal). I get home around 8PM, text a bunch of people about what Rooney was like in person (super sweet), and collapse onto my bed. I watch a bit of Netflix and go through my pictures from that day until I fall asleep around midnight. 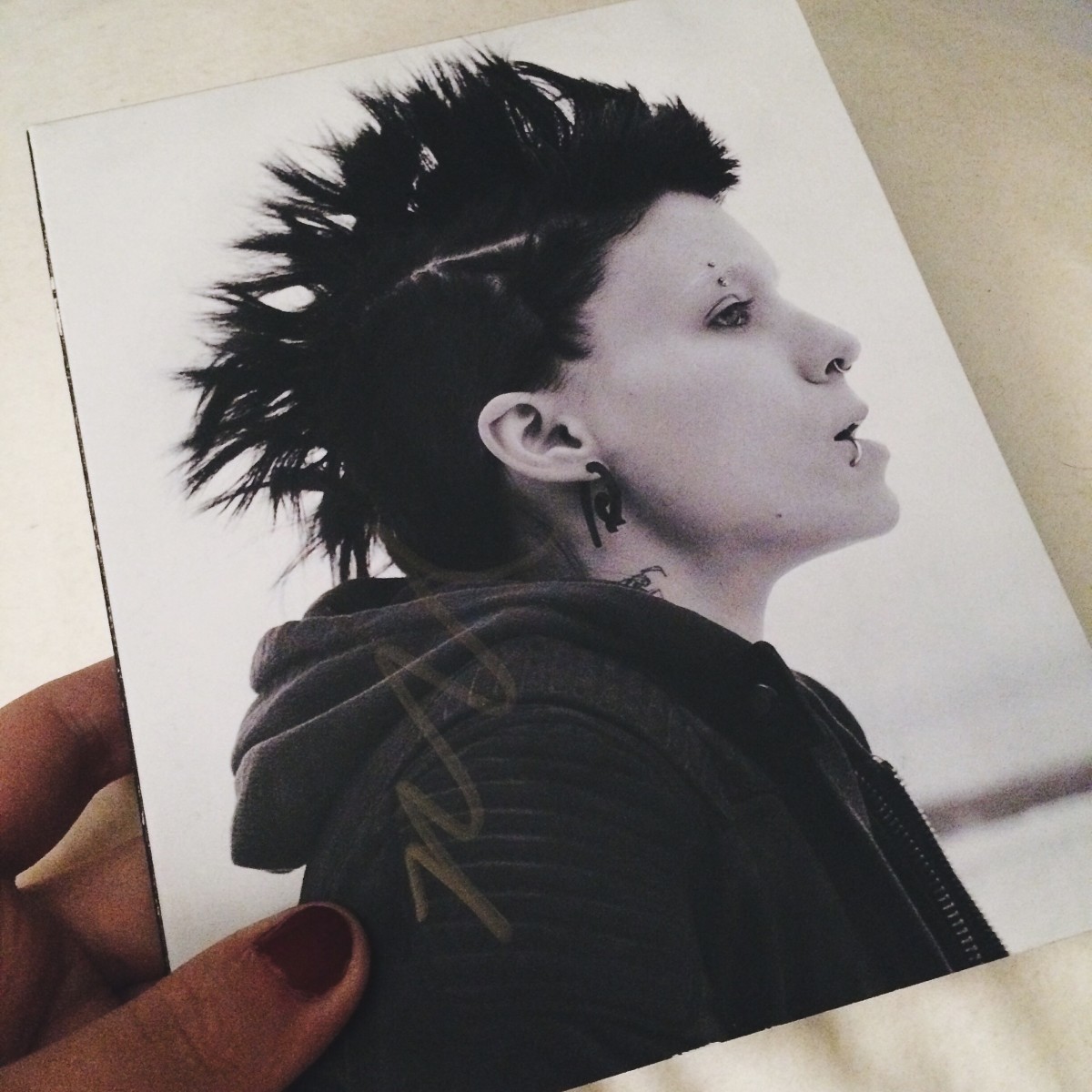 8AM: I wake up and start to get ready for a day of some school, but mostly TIFF. I have one class that day, a tutorial meeting section in a Cinema Studies course. Before leaving, I remember to grab the baseball hat I bought the day before (with my Members' discount) at the Lightbox gift shop. I have three movies ahead of me, which means a lot of waiting in line, which means a lot of standing in the sun, which means that it’s best that I pack a hat and save my friends from having to hear me complain about it.

11:15AM: I get to King Street, which at this point in the Festival is starting to feel like my new home. While on the bus, I checked Twitter and saw that a screening of La La Land had been added for Saturday morning. With my fingers crossed, I head to the Member’s box office and to my delight, there are actually tickets left! Also, behind me in line was Atom Egoyan. I resist the urge to ask him about his Festival experiences so far. When I left, I could hear him inquiring about Moonlight tickets. There’s something reassuring about knowing that even directors have to pick up tickets like the rest of us at some point or another.

11:30AM: I head to Momofuku on University to grab some cookies from the Milk Bar.

12PM: I get to class. It’s the first week at U of T, so as an ice-breaker we go around, introduce ourselves and say what our favourite movie is, or what the last great movie we saw was. I talk about Inglourious Basterds (favourite) and Manchester By The Sea (last great one seen at TIFF). A few other people mention movies playing at TIFF and I try to control myself before I ask for their full reviews and recommendations.

2PM-5PM: After class ends I meet my friend Ayshwarya at Ryerson where I’m seeing my first movie of the day: Una. We have a good spot in line and for the next hour we watch dogs and eat Momofuku compost cookies, which taste much better than they sound. I have some mixed feelings about Una and when the film ends, I make a mental note to read up on the play it’s based on. Mixed feelings aside, Rooney Mara and Ben Mendelsohn are absolutely fantastic and I think the movie handles its subject matter well.

5:30PM: I arrive at the Bloor Hot Docs theatre for my next screening, City of Tiny Lights. Without realizing it, I’ve planned a day with two Rooney Mara movies and two Riz Ahmed movies. I don’t mind this at all. The woman behind me asks the person she’s with if there are British subtitles. I laugh, but I’m also not going to pretend I didn’t wish that those existed last year when I was faced with Tom Hardy’s very strong London accent in Legend.

8:10PM: City of Tiny Lights ends. I enjoyed seeing a film noir plot adapted for a setting of modern London, and, as expected, Riz Ahmed is wonderful in it. On the way out of the theatre, I run into my friend Rhiann and her roommate. She tells me she called out someone for texting. I knew there was a good reason we were friends. I want to stay and talk about the movie with her, but I have a screening of Lion at 9:30 and have to catch the subway. 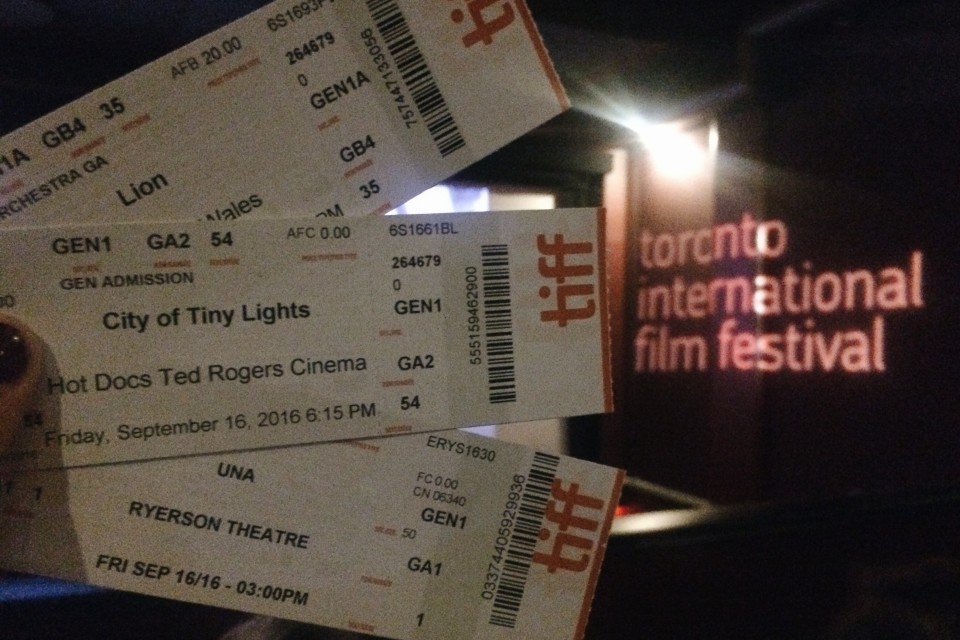 8:30PM: I end up back at King Street. Unfortunately, I seem to have gotten there as the Friday night crowd is mixing with the TIFF-goers and the street is packed. On the bright side, I reaffirm my belief that if speed walking and crowd weaving were an Olympic sport, I would at least get bronze. I make it to the line at Princess of Wales pretty quickly and while I’m waiting I eat one of my last cookies. I overhear a few people talking about how excited they are for the movie and they echo my feelings. This was a screening added a couple days ago. I had really wanted to see Lion, but the scheduling of other movies had gotten in the way. When I saw an email about a member pre-sale, I bought a ticket before I’d even finished reading it.

9:15PM: In the theatre for Lion, I start chatting with the woman next to me. She shows me her autograph book and my heart nearly bursts when I see how adorable her autograph from Jacob Tremblay is. 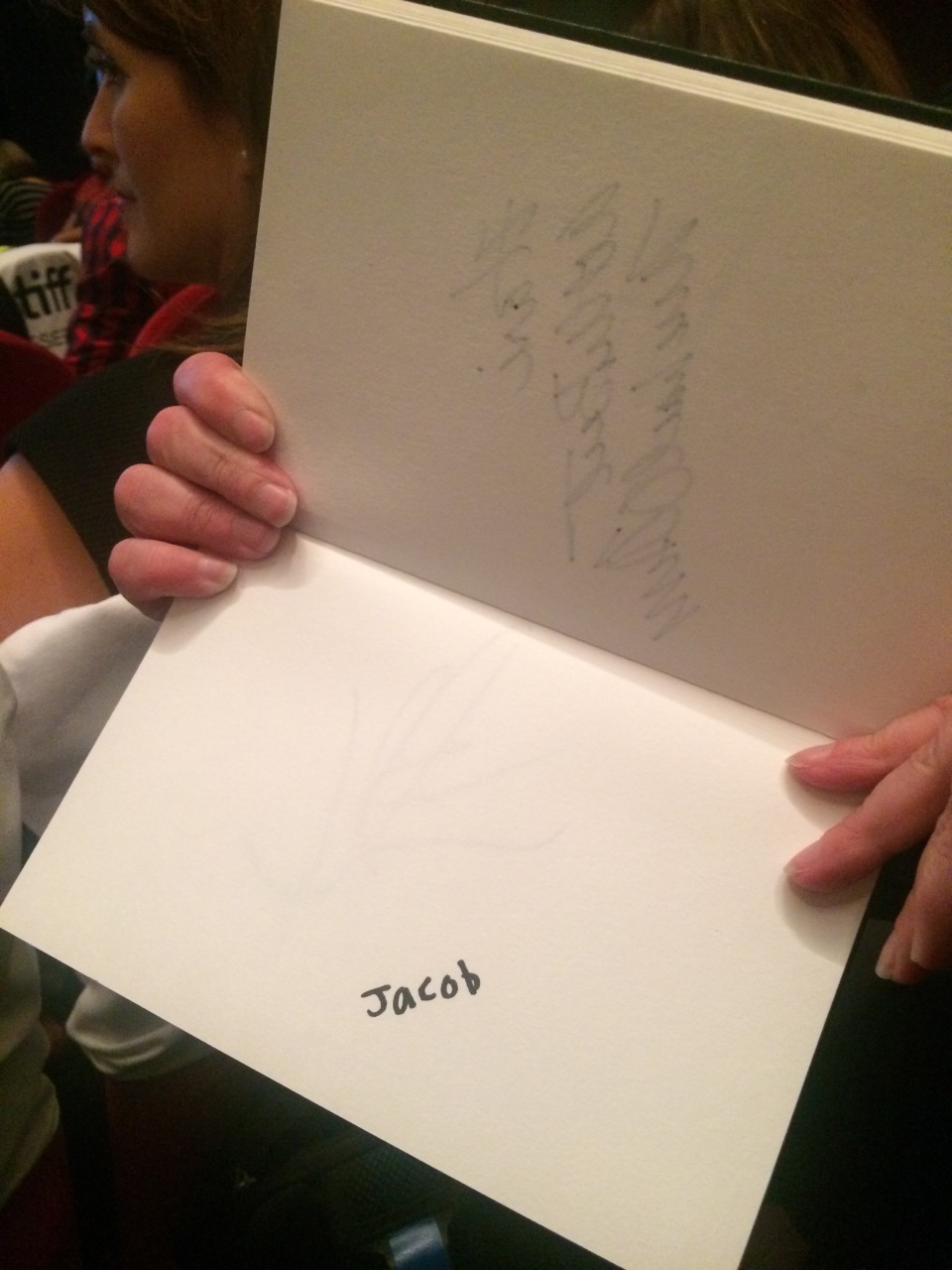 11:30PM: Lion ends and I have been ugly crying for the last 20 minutes. I try to compose myself and hope that my mascara isn’t running down my face. I also really want to just go home and hug my mom. It’s definitely my favourite movie of the day and I instantly know which friends I will recommend it to.

1AM: I make it home, get into bed, and start writing this to have it ready to edit and email to Chandler early tomorrow morning. (Editor’s note: Thanks!) Overall, it’s been a pretty great day of TIFF. As much as I’m looking forward to getting back to a normal schedule and being able to catch up on sleep, I’m going to miss making friends in line and watching three movies a day. I still have two movies to see, La La Land and Nocturnal Animals. Realistically, I’ll probably end up seeing something else in the next two days as well.

3AM: I finish writing and catching up on social media. I shut my laptop, check to see where my cat is and fall asleep almost instantly. Good night TIFF!

Love Anna's journal? Become a TIFF Member and take advantage of everything the Festival has to offer year-round at http://www.tiff.net/membership/