On Day 5 of the Festival, Deepa Mehta processes her film Anatomy of Violence’s premiere, says goodbye to her cast and gets tripped by an usher at the Arrival screening 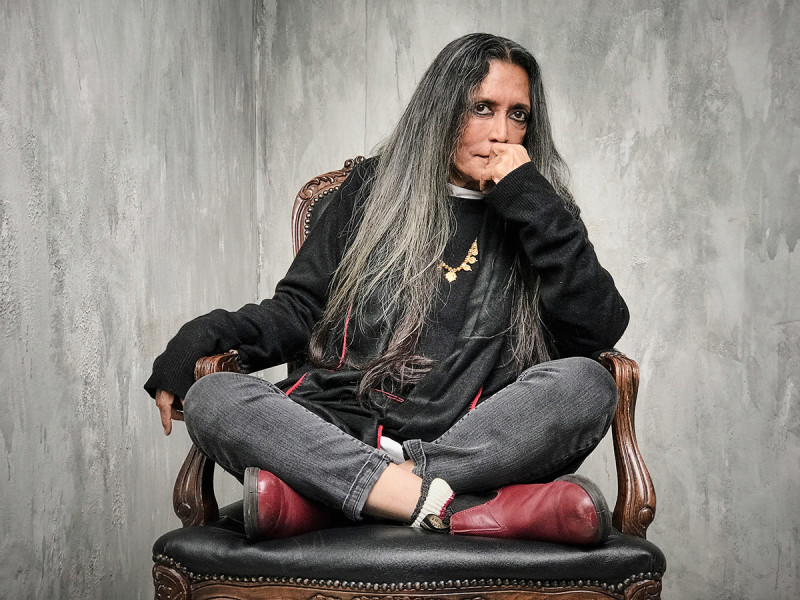 It's the morning after a nervewracking day: September 12th. We had drinks at our condo to “celebrate” our film Anatomy of Violence, which premiered that evening at TIFF. It took a lot of hair-pulling and nail biting to the quick to take this “party” leap. I mean, is it even politically correct to gulf down Prosecco before screening a movie about six rapists? David Hamilton, our producer, felt that it was not dodgy at all. The cast of seven had come from India for TIFF, for many it was their first festival and for three of them it was their first time on a plane. So we opened our doors and celebrated the talent. 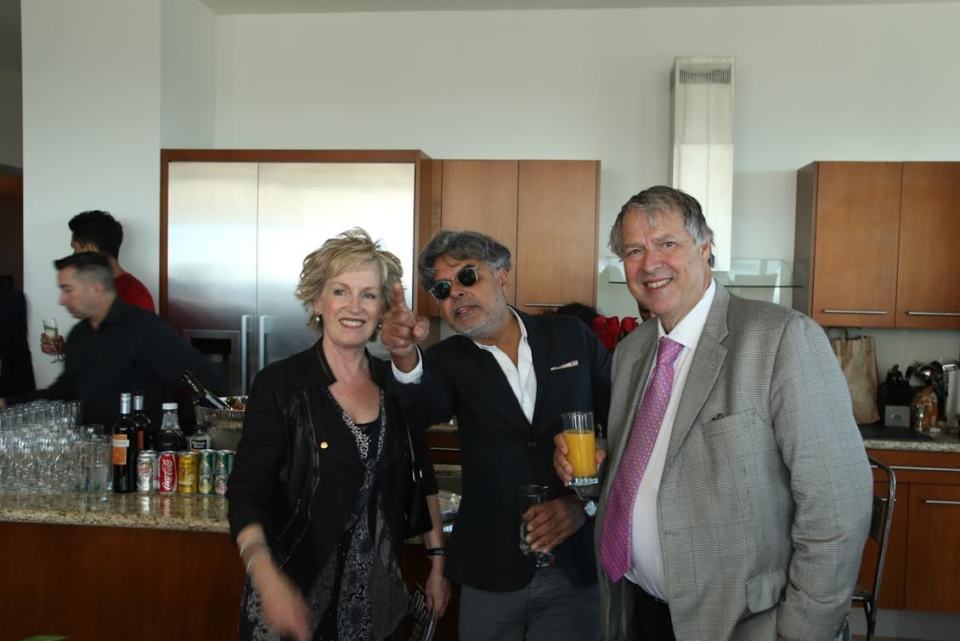 The place was packed with folks who had either seen the film in previews or were going to see it later. Piers Handling and the brilliant and compassionate filmmaker Federica showed up. As did David Vella. Jennifer Tory, the Vice Chair of TIFF, came to wish the cast good luck, who got the art of shaking hands and smiling down to a T without understanding a word of English. Konkona Sen Sharma, the very talented actor-turned-director of Death in the Gunj came to give the requisite Desi (Indian) hugs. Priyanka Bose from the film Lion was there. Sadly no Dev Patel - don't know him! The lovely and talented Molly McGlynn, whose very funny and sexy short 3-Way (Not Calling) had screened at TIFF, dropped by. As did Dusty, whose excellent short, despite not getting into TIFF, had a wonderful, “onwards” attitude. (I would be screaming my head off or have committed some seriously heinous acts.) And yes, of course, there was family, all chipping in. My daughter Devyani Saltzman came from Banff, my brother Dilip whose fabulous doc Mostly Sunny screened at TIFF to a rave reaction on the 11th. My niece Sia who had skipped school at St. Andrew’s, my nephew Varun from Delhi and my sister-in-law Nila from Delhi. Phew. Much help was given getting the bloody cheese platters in some sort of aesthetic order.

This was followed by the screening of Anatomy of Violence that went well - I guess, if you can interpret pindropped, stunned, interminable silence at the end of the film as a positive reaction.

It's this preamble that brings me to the morning of September 13th. The day when I start writing my TIFF Diary for Chandler.

7AM: Stumble out of bed. David makes the coffee, he advises me to shut my eyes as he guides me past the living room into the balcony. After two cups of foul black brew, I go in and face the disaster zone that our living room-post the AOV bash is. An instant turn into Molly Maid does the trick. After two hours of cleaning up and ditching empty Prosecco bottles, I am ready to face the world and the Festival.

10AM: Armed with TIFF accreditations swinging officially around my neck, I go for my first meeting at Canteen. The place, of course, is humming with film talk. I am meeting Uma Da Cunha who programmed my film for the Mumbai Film Festival. We are in conversation about the festival screening of Anatomy of Violence there next month. Let's see. David needs to sort out some details. I try to eat healthy - yogurt parfait. It's most dissatisfying and settle for avocado toast. A few folks come up and tell me how deeply affected they were by my film. One woman says, "By focusing on the rapists, you have betrayed all women. And why didn't you show the rape? The world needs to see what these men did.” I told her to go see Elle and read Susan G. Cole's article in NOW about rape and its representation in film.

12PM: The cast arrives from their respective hotels, herded by the wonderful Maithili. Some are leaving for India, others are heading to their friend’s places in Brampton and Mississauga. So, it's souvenir time. We buy TIFF t-shirts at the gift shop and happily pose outside it. I can't help getting a bit teary. This group of actors is absolutely remarkable, not only for their talent, but also for their SPIRIT. 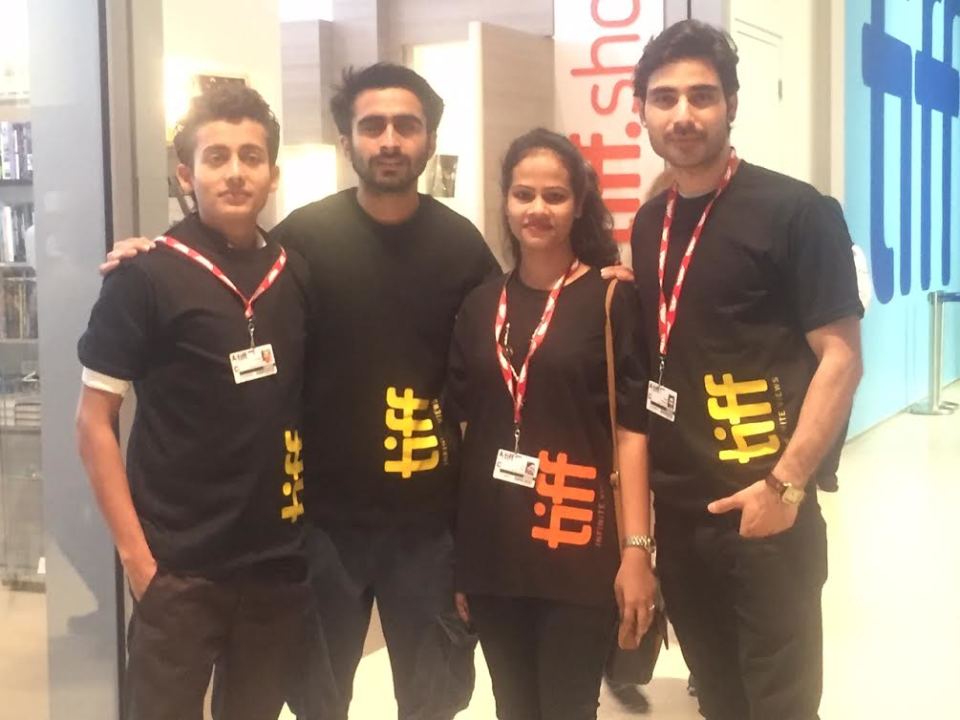 1.30PM: A farewell lunch with family at the Boulevard Café in the Annex, away from the fray of John and King. A moment of respite. And chilled white wine and Dilip and myself grinning like idiots reading (only the good stuff) that’s on social media about our respective films. It's pathetic how needy we filmmakers become in our search for affirmation. It comes with the territory. Sadly. 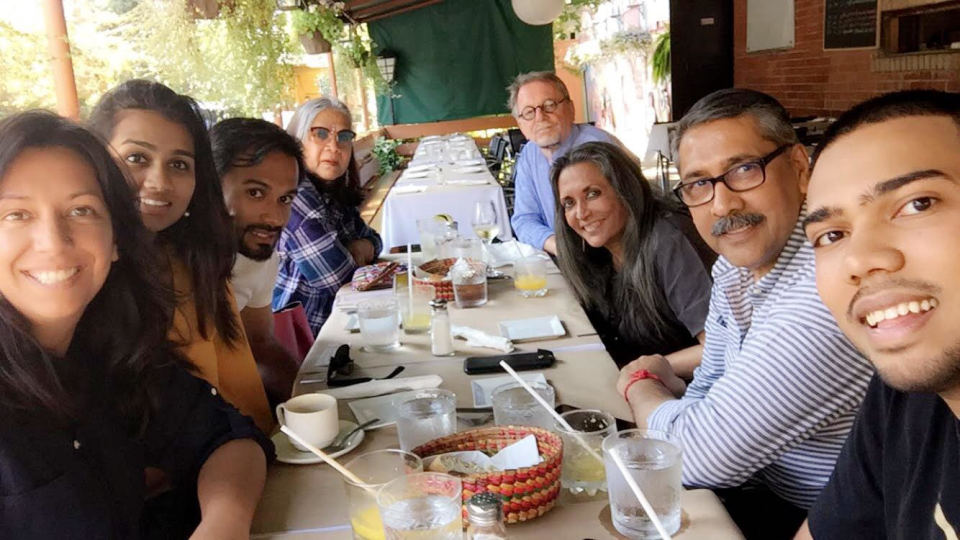 2.45PM: We line up outside Princess of Wales for the Denis Villeneuve film Arrival. It’s a lineup that goes around the block! Devyani chats with her buddy Justin who is the film commissioner for Ontario as we patiently plod towards the theatre portals. Devyani and Justin dissect the critic-favourite Nocturnal Animals - “confused and shallow” is their take. Now I really want to see it. 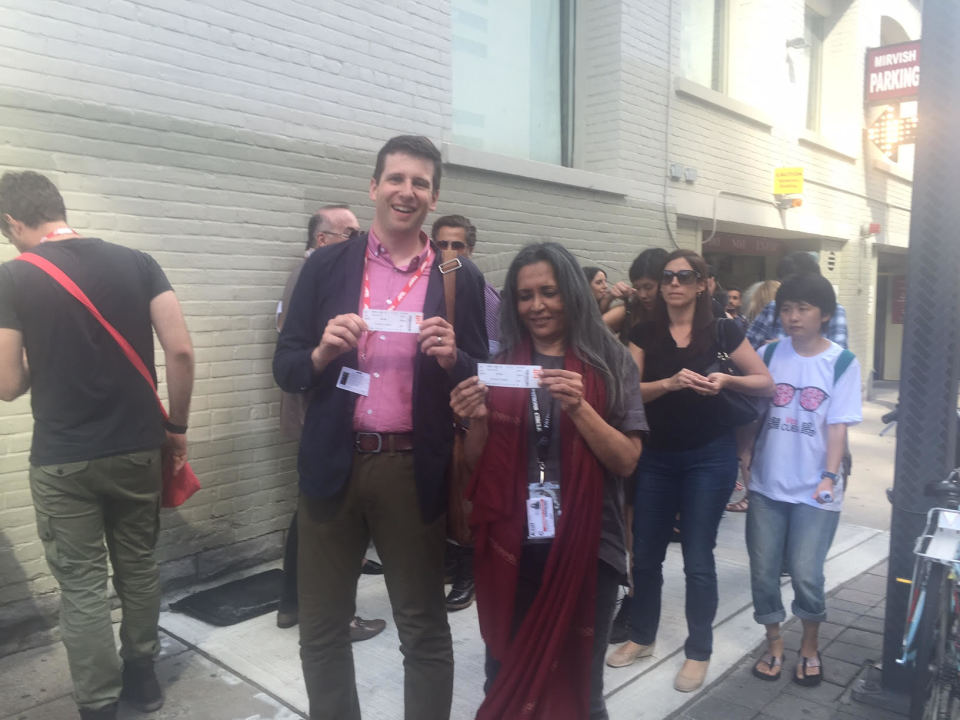 We finally get into the lobby of Princess of Wales. I love meeting people in these TIFF lineups. We get into the theatre and an usher trips me and I land on my bum - hard ! Trying to muster as much dignity as possible and recall a yoga “asan,” I spring up and say, “It's cool” to a group of giggling, getting off on schadenfreude kind of folk.

The movie is beautiful and the sound design reminds me of the music played by my favourite yoga teacher at the JCC. Each time an alien is sighted there it is - the slow humming of an OM. The chants and the Buddhist bells. All very calming. The real alien to be wary of is, of course, Trump south of the border.

5PM: I stagger to have a bowl of cereal and then onwards to the big ticket of the Festival: Manchester by the Sea. Again, there’s a lineup around the block. I bump into Wiebke von Carolsfield the editor and Canadian filmmaker. Aseem Chabra, a journalist from NYC, chats about my “disturbing” film. Then I see Warren Spitz, a friend and co-board member of TIFF who has managed to get us VIP seats - hallelujah! David gets the popcorn and I have a fan moment with Michael Ondaatje, who sits a row in front of us.