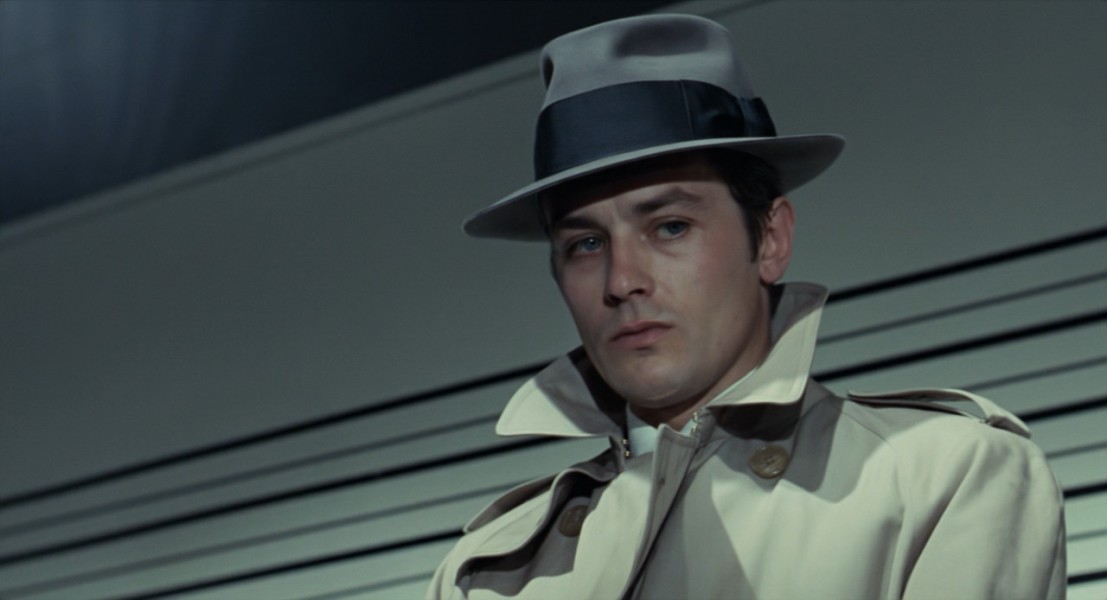 In one of the more unfortunate mishaps of film history, the French New Wave became famous among North American critics and cinephiles while the man who more or less fathered the movement, Jean-Pierre Melville, languished in coterie obscurity. With the imprimatur of Quentin Tarantino, John Woo, and Martin Scorsese, and a 2006 re-release of his French Resistance thriller Army of Shadows that became a surprise cultural phenomenon, this great director finally received some of the attention here he has long deserved. A figure of inestimable importance, Melville is the French connection, the central nexus between American and French cinema, between the tradition which preceded him and the nouvelle vague. The crosstalk between the Melville retrospective and this summer’s French Crime Classics series verifies his importance; his appearance in Breathless (which we screened last season at the Cinematheque) seals the deal. 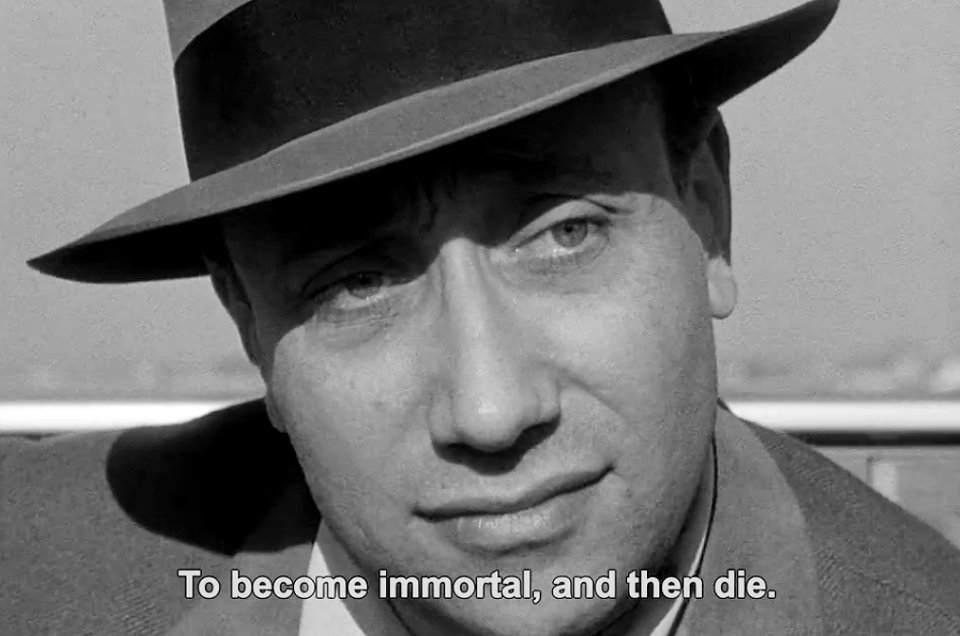 That this most French of directors was an avid Americanophile is just one of the many ironies that mark his career (Ginette Vincendeau subtitles her study of Melville An American in Paris). When asked which directors influenced him, he rattled off the names of 64 American auteurs from the pre-war period, and elsewhere called John Huston’s The Asphalt Jungle “the greatest film in the world”; he sported a Stetson and Ray-Bans, drank Jack Daniel’s, loved guns, boat-sized Cadillacs, and Ford Mustangs, purported to know Manhattan better than any New Yorker, and changed his name from Grumbach to Melville in homage to his favourite Yankee author. However, Melville balked at anyone who claimed that his films were in any way American, arguing that they were utterly French, especially in their aura of existential pessimism. 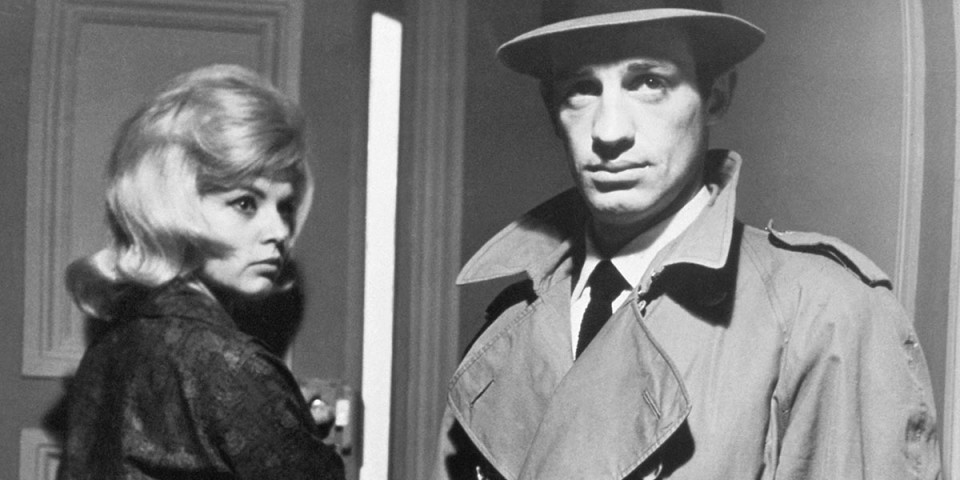 “Where you have two, one betrays” — Melville’s famous phrase not only serves as an elegant summation of his bleak world view, but in its laconic directness also suggests the economy of his style. (It is no accident that the titles of films he influenced have an almost parodic two-word terseness, heavy on the definite article: The Driver, The Killer, Le Trou, La Balance.) Tough, taciturn, heavily coded, and ceremonial, set in a depopulated, shadowy Paris, or some ashen outpost, Melville’s thrillers tend more to the existential than the transcendental. “My ‘bad boy’ characters all have a code of honour, of loyalty, of courage,” he pointed out: his losers and loners, outfitted with trench coats, white gloves, and granitic demeanour, are willing to die, according to Melville, “to preserve a sort of purity.” Clenched and remorseless, they are “ice-cold angels” (as the European release title of Le Samouraï had it), and their women are often just as cryptic and lethal. 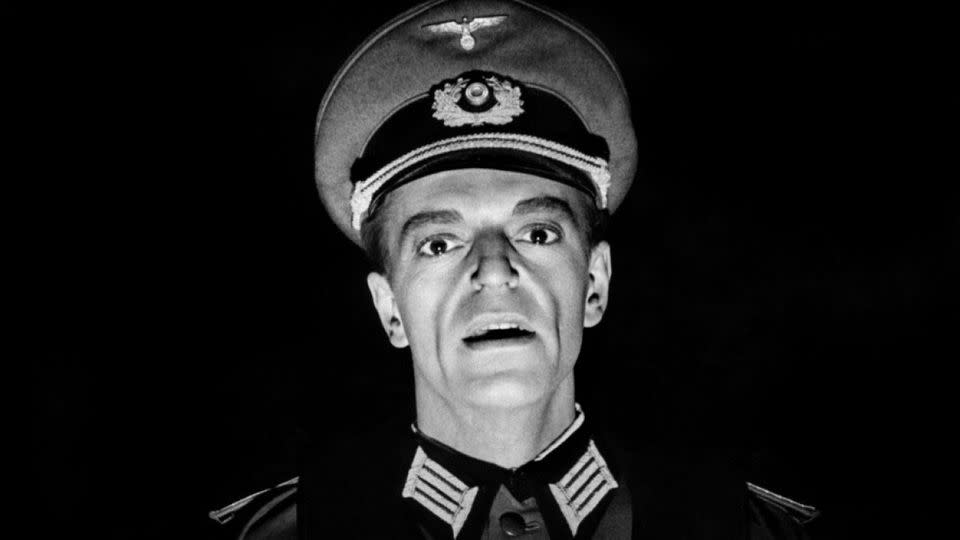 Melville announced in his first feature, the ultra-eerie Le Silence de la mer (which was based partly on his wartime experiences), an approach which emphasized silence, temps morts, suspense that is metaphysical or spiritual, a modernist sense of visual composition that emphasizes the psychological dimensions of space, and (anticipating Bresson) the strange nature of everyday objects and gestures. Even when he moved on to renovate the American genre he so admired — the heist thriller — his rigorous, unadorned style stressed interiority of action and inexorability of fate. (The New Yorker’s Penelope Gilliatt characterized Melville as “the poet of the implacable.”) After the contrasty black-and-white checkerboard of Bob le Flambeur, the palette of Melville’s films became increasingly steely and muted, drained, and delimited to suggest the psychic depletion of his world-weary characters. 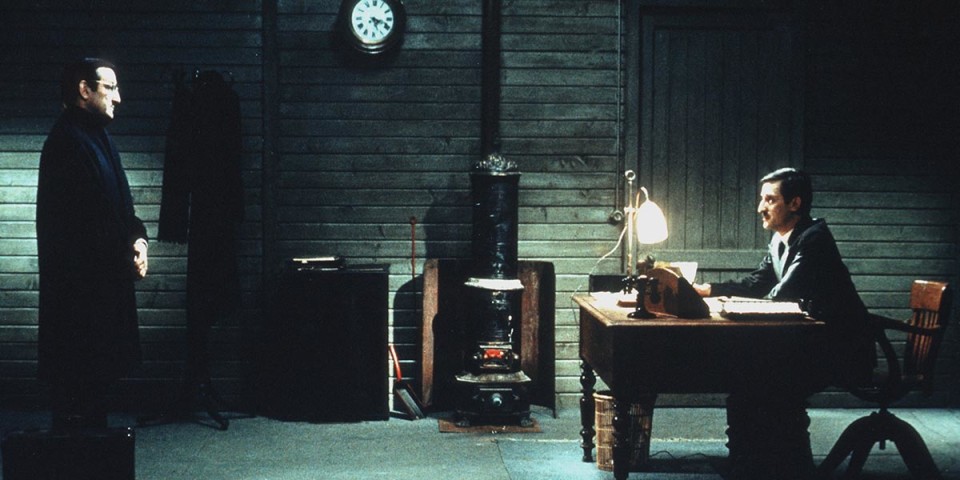 The austerity of Melville’s style has inevitably earned comparisons with Carl Theodor Dreyer and — in its sense of ritualized gesture, its visual formalism, its abstract use of sound (and silence) and non-expressive acting — Bresson. While Melville himself bridled at the suggestion that his style was influenced by that other master of spiritual cinema, claiming that it was the other way around — “Look at* Le Journal d’un curé de campagne*,” he said, “and you will see that it’s Melville. . . . It’s Le Silence de la mer!” — the Bresson appellation stuck. Andrew Sarris drew a line between Melville’s “Bressonian” early films (up to Bob le Flambeur) and the “Hawksian” late works (one assumes “Hawksian” because of their emphasis on professionalism, codes of loyalty, and grace in the face of death; the shared cigarettes are another tip-off), which Sarris favoured: “These seven cinematic hymns to gallantry and grace constitute … the full flowering of Melville’s genius for the emotionally expressive narrative in cinema.” 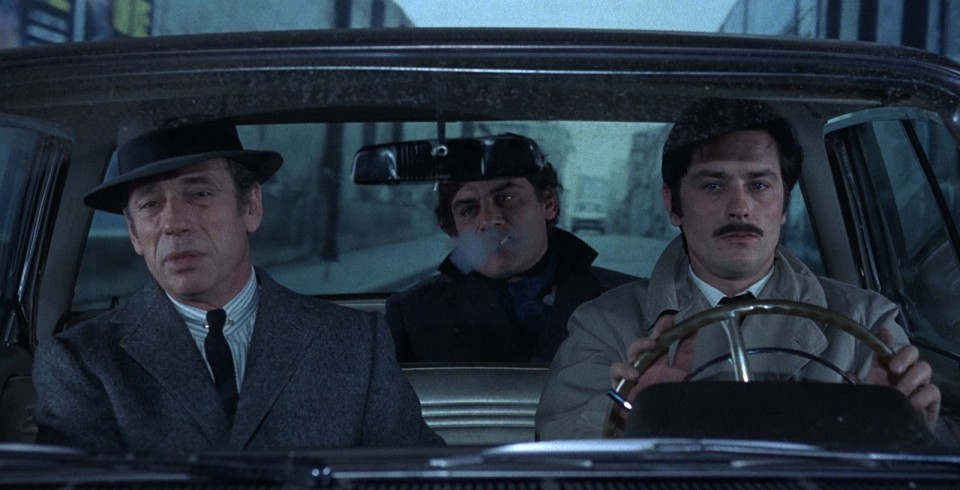 As with most such critical typologies, Sarris’ division proves a little too binary: surely Le Samouraï, which Melville confessed was partly inspired by Pickpocket, is more Bressonian than Hawksian in its clenched austerity. (A blank-faced Alain Delon lying abed in his bare, darkened room recalls Bresson’s Michel in his garret; both are walking semiotic systems.) Melville was not only a crucial link between classic Hollywood cinema and the French New Wave, but also influenced the New German Cinema (Fassbinder’s films are rife with Melville homages) and (more recently) new Asian cinemas, as well as the 1970s American “cinema of loneliness” and its hip, insolent heirs.

In addition to Woo, Tarantino, Scorsese, and such other tough-guy romanticists as Walter Hill and Michael Mann, directors of all manner of temperaments, tastes, and persuasions — aesthetes and pugilists, ascetics and embellishers, tough guys and tender poets, rebels and studio pros, existentialists and Catholics (some gay, some straight), moralists and cynics — have responded to his cinema. Many roads converge at the Melville junction: not only Bresson and Hawks, but also Huston and Wyler, Godard, and Chabrol, Fassbinder and Schlöndorff, Cocteau and Jacques Becker, Nicholas Ray and Jules Dassin, Resnais, Malle, Tavernier, Francesco Rosi, Alain Corneau, Neil Jordan, Jim Jarmusch, and Takeshi Kitano.

The throughlines of influence start to furiously tangle when one considers that Melville and Bresson both worked closely with Cocteau on their early films; that Fritz Lang was an influence on Melville, Fassbinder and Chabrol (though obviously in different ways), and that Fassbinder tips his fedora to all three in his early films while Chabrol gave Melville a cameo in his Langian Landru; that Malle and Chabrol both used Melville’s favourite cinematographer Henri Decäe (the former for his debut Elevator to the Gallows, screening this season in our French crime cinema programme); that Truffaut loved Melville’s adaptation of Cocteau’s Les Enfants terribles, and paid tribute to Melville in Shoot the Piano Player and Cocteau in The Green Room; that Melville long wanted to adapt Proust’s Swann’s Way, an ambition that was eventually realized by his apprentice and “spiritual son” Volker Schlöndorff (with Swann in Love); that there is a kind of Borgesian circle of homage that connects Melville’s Bob le Flambeur and Two Men in Manhattan with Godard’s Breathless; that Bertrand Tavernier worked as a press agent for Melville, and recalls dragging Melville to what he called “that monstrosity Johnny Guitar.” (Never mind the fact that two of Jacques Tati’s children worked on Melville’s last film, Un flic!) The eddies of influence seem infinite, which only emphasizes the key role Melville plays in the history of postwar cinema.