How to Crowd-Fund One Million Dollars

How do you raise 1.7 million dollars in crowdfunding for your indie passion project? Just ask the production team behind the ambitious sci-fi film Code 8, which became the highest crowd-funded Canadian film of all-time and eighth globally. Take note, because just like the “specials” in the film, the power to shake the system is within.

Code 8 is set in an alternate reality, where four per cent of people possess abnormal abilities, labelled “specials.” They live a marginalized life, most living below the poverty line and are monitored closely by the government in how they use their powers. Taylor, a “special” played by Toronto actor Robbie Amell, takes odd construction jobs in order to support his family and tries to keep his powers subdued. When a fight breaks out at his workplace and police go after Taylor and his friend with special class "brawn" powers (Hannibal's Aaron Abrams), the bubbling fault lines of repressing these “specials” erupts (i.e. Taylor goes off).

Billed as Robbie and Stephen Amell’s first movie together, the actors brought highly engaged audiences from their hit TV shows The Flash and Arrow, respectively. (Editor's note: Robbie also had a star-making turn in the amazing teen rom-com The DUFF!) Director Jeff Chan and co-writer Chris Pare had already worked together on their fan-made viral short Call of Duty – Operation Kingfish which was key in greenlighting their first studio film with Sony Pictures, Grace: The Possession. The group had always wanted to make a project together, but even with star-power behind them, they wanted to do it on their own terms. 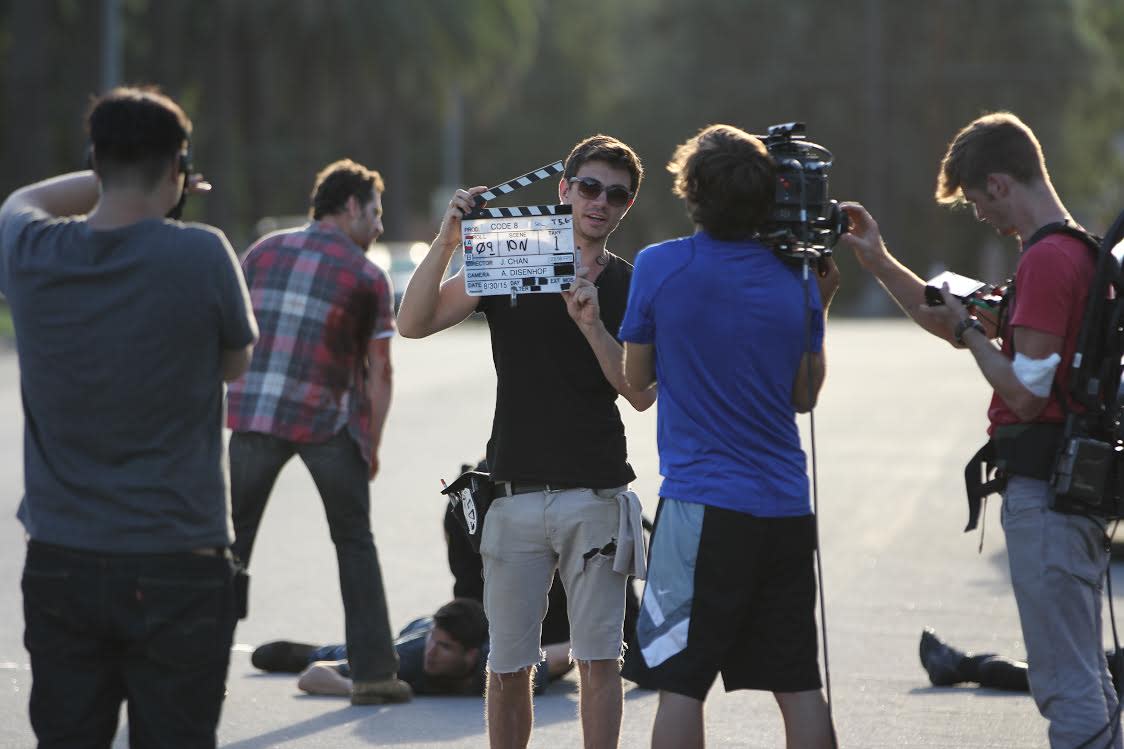 Behind Code 8 is a finely-executed campaign of incentives and promotional elements that are exemplary to filmmakers and marketers alike. The range of perks included: Blu-ray copies of the finished film, VIP premiere invitations, flying out for the Amell’s birthday party in Los Angeles, executive producer credits and a film school package allowing you to shadow the production team throughout. What’s clear is that while backers are investing in the film, the production team is equally investing back into its audience.

We spoke to Code 8’s director/​co-writer Jeff Chan and writer/​producer Chris Pare to get a first-hand account of how this Canadian production came to be one of the highest crowdfunded film projects of all time.

YOU’VE WORKED IN THE STUDIO SYSTEM. THE MAKING OF CODE 8 IS PRETTY MUCH AS FAR OUTSIDE THAT AS YOU CAN GET.

Jeff: When someone else is financing your film, you have to be respectful and work under their terms and that’s part of the process. The team for our short loved the project, they loved the idea, I had worked with them in the past. And they did it because they wanted the feature to get made. It’s very different than when you make a studio movie. People only did this movie out of passion.

TIP #1: AVOID SHIPPING COSTS Avoid shipping costs for low-level perks. You'll have a lot of backers at $25. When we launched Code 8, the first perk level that required shipping were DVDs set at $35.

TIP #2: ENGAGE WITH YOUR AUDIENCE Give people a real reason to come back to the campaign page every day. You'll want to offer up-sells, contests and new perks. Make sure you plan enough content to have your backers already hitting refresh on your campaign page daily.

TIP #3: PERSONALIZE YOUR CONTENT There is a real difference between “tweeting” and “communicating.” Make sure your star power is on-board making personalized videos, filming Skype calls with fans and otherwise, keeping a visible presence. A few tweets will not be enough.

TIP #4: KEEP SET VISITS TO VIPS ONLY Access to set is key for higher-level perks. Yes, it might be your workplace and the allure of set has worn off, but for fans not familiar with the process, access to set is unique, exciting and valuable.

TIP #5: BE REALISTIC Here's an exercise. Take the social media following of your top two stars. Multiply this by $0.50. Is that what you were thinking for your goal?

For me, the most important thing was to make a movie that I had control over and was able to execute on my own terms. That’s how I made my short films coming up and got noticed in the first place. It’s like going back to my roots.

Chris: It’s hard to ask people for favours when shooting a studio film... With Code 8, it was going to be a challenge because we had no money, but we had creative freedom and worked with people who were passionate about the project.

SO HOW DOES YOUR CREW FEEL NOW THAT YOU GUYS WENT 816 PER CENT OVER YOUR TARGET?

Chris: Everyone’s extremely happy with how it turned out, and we’re incredibly grateful for their support. The campaign’s success gives us more options on how we can make the movie. The short acts as a proof of concept for the feature, but nailing the quality of the film and hitting the right tone with our audience was equally important to us.

Jeff: Money aside, it was the thousands of people who contributed one dollar that actually show how many people are interested in this thing. And it doesn’t change what we’re trying to do with the feature story, and the heart of the story. That core would remain constant whether 500 thousand was raised instead of 1.7 million.

TODAY, PROOF OF CONCEPT SHORT FILMS ARE PLAYING A KEY ROLE IN GETTING TO MAKE A FEATURE. WHY DO YOU THINK THAT IS?

Chris: The market’s just not there to write a script and get it financed. That’s just not a realistic option. Nowadays, if you’re a filmmaker and you want to do things on your own terms, you have to demonstrate that you can make the movie first.

Jeff: There’s so much noise out there. So many scripts and so many people pitching ideas, that people aren’t really able to visualize the end product the way that a proof of concept can do for you. It’s a big risk, but there’s a big reward and payoff.

HOW DID YOU DECIDE WHAT YOU WERE GOING TO SHOW IN YOUR PROOF OF CONCEPT? IT FELT LIKE THE FIRST 10 MINUTES OF THE FEATURE, WHILE LIVING ON ITS OWN.

Chris: We knew that we wanted to make something that made sense for Robbie Amell, for the people that we work with, and the relationships that we have in terms of post. We have this great visual effects company in Toronto called Play Fight. They’re very talented. Our taste is in genre films that are elevated and still have a dramatic spine to them. They aren’t typical action flicks or sci-fi movies.

Jeff: We wanted to make sure that there was a certain level of relatability to the character, and to establish a realistic tone before the big digital effects. We wanted to build a world that was different than X-Men.

Chris: It all feels the same now. Big spectacle, skyscrapers being blown up. We’re more interested in human stories. And we don’t have $200 million to compete. So if I want to work in this genre and I’m not making a movie for Marvel or Fox… where can I fit in? We wanted to tell a sci-fi story that felt very real and human. And have a pulse to it, as opposed to this big gargantuan machine. That’s why we got the response that we did. 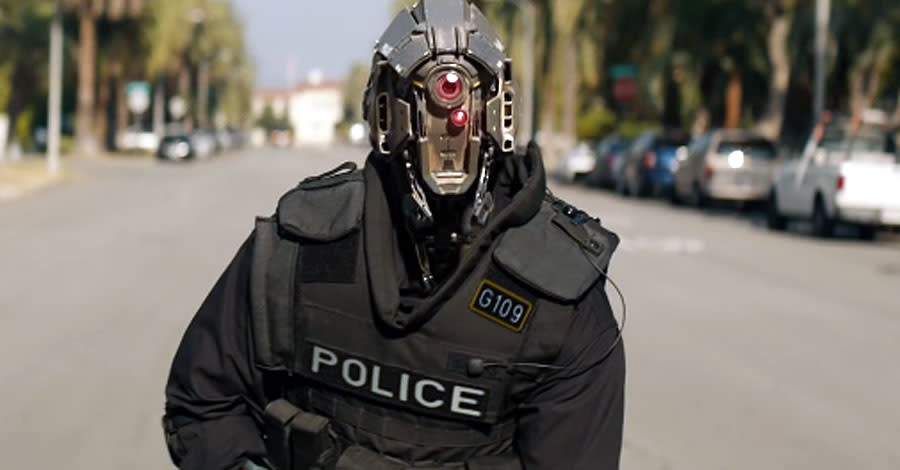 FOR A CROWD SOURCING CAMPAIGN, HOW IMPORTANT ARE THE INCENTIVES AND PROMOTIONAL MATERIALS?

Chris: We worked with a company called Space Mop. They are fantastic. You have to have it all formulated. You can’t just expect a lot of people to give you money. It has to be something that you have to earn. You have to show value, in both the product and in the proof of concept. And you have to engage them in a way that feels meaningful and offer them some incentive that they see as valuable. That’s really hard to do.

Jeff: Some people just wanted cool Arrow swag and some wanted to see our movie become a feature film. When we first launched, we had a huge surge of donations primarily off Robbie and Stephen’s fan-base. Then we stalled for a good week or two.

Jeff: I posted it on Reddit and it went on the front page. It got 11,000 upvotes, it was ridiculous. That triggered a mainstream viral push, and that’s when we really hit our stride. We got up to 400K in two weeks. What ended up happening was viral marketing, coupled with Rob and Stephen Amell and our campaign managers putting some great perks out there. We actually made the majority of our money back in the last two days.

DO YOU THINK THIS PROJECT COULD HAVE BEEN MADE IN THE CANADIAN SYSTEM?

Jeff: A lot of the fans are Canadian, a lot of the donations came from Canada. There’s a proven demand there from a Canadian audience. At the current moment our hope is to try to make the feature out of Canada, in the same spirit that we made the short film.

Chris: There isn’t a lot of material like this coming out of the system here. So, this is exciting. This is the kind of content we want to make.

WHAT SURPRISED YOU ABOUT THE AUDIENCE RESPONSE TO YOUR PROJECT?

Jeff: My favourite part is people arguing on YouTube. I love it when someone is talking about Robbie’s character being a complete asshole. And then people say, “No, the cops are bad!” and then, “No, the guy was bad, he smashed a window!”

Chris: I was surprised at the YouTube comments. For the most part, people actually had thoughts about what happened in the short.

Jeff: That’s when we knew we had something that was working. When the YouTube comments weren’t absolutely horrible.