How Sid and Nancy turned punk cinema into punk nostalgia 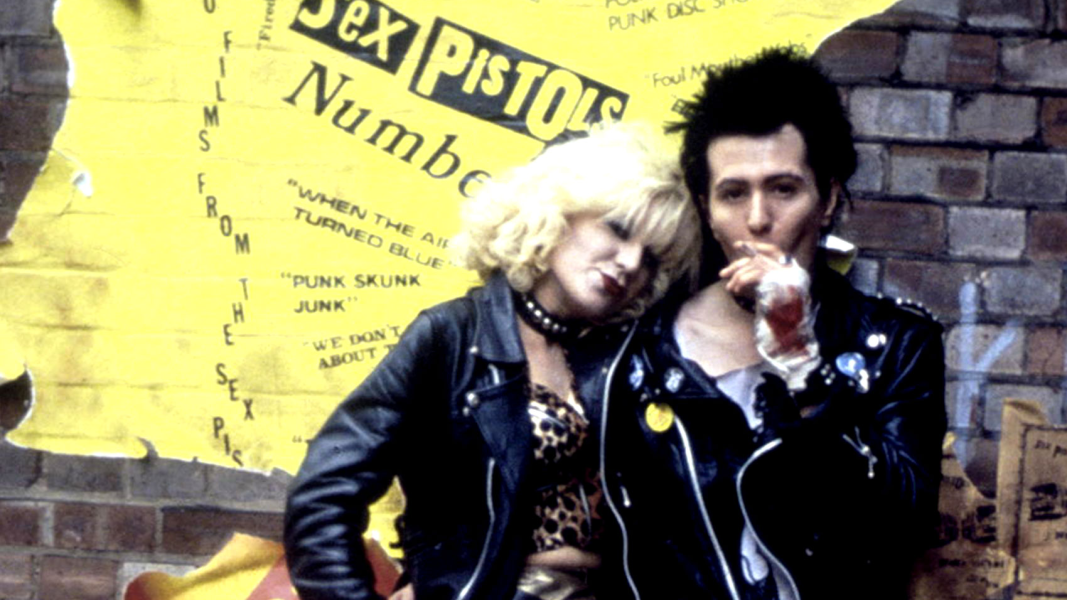 Sid and Nancy screens on Friday, May 11 as part of TIFF Cinematheque Special Screenings.

John Lydon — better known as Johnny Rotten — got angry about lots of things, but his feelings about Sid and Nancy were on a whole other level. Released in 1986, Alex Cox’s film chronicles the doomed romance between Lydon’s Sex Pistols bandmate Sid Vicious (known to his mum as Simon Ritchie) and Vicious's American girlfriend Nancy Spungen (played, respectively, by a far-from-Churchillian Gary Oldman and Chloe Webb) as the star-crossed, smack-addled lovers enter a downward spiral that starts amid the Pistols’ chaotic final months and ends with Spungen’s grisly death in New York’s Chelsea Hotel in October 1978; charged with her murder, Ritchie fatally overdosed on heroin while out on bail the following February. Though Cox doesn’t airbrush all the ugly details (and they were often very ugly), he nevertheless presents this fundamentally unglamorous couple in ways more flattering than the sordid truth might have allowed, whether that means showing them kissing like nouvelle vague pin-ups in an alley as garbage falls around them in slo-mo, or Spungen on the nod dreamily gazing at the fire she just set in their hotel room.

Lydon’s many complaints about the film ranged from never being consulted by the filmmakers (Cox claimed he had been, but was too drunk to remember) to the Scouse accent used by actor Andrew Schofield, who portrayed Lydon on screen. Eviscerating Cox’s “non-truth of a movie” at every opportunity, Lydon even tried to block its release. He was especially livid in an MTV interview, calling Sid and Nancy “a degrading, stupid, lying piece of cheesiness bearing no sense of reality whatsoever.” As to why Cox would perpetrate such an outrage, Lydon had his own theory: “It was fantasy,” he said. “It was probably like the youth [Cox] never had — he was trying to live through us.”

While Lydon’s last statement was speculative, it was also perhaps his most prescient. Just a decade after the Pistols caused public firestorms throughout the UK in the summer of 1976, punk was already period. It’s easy to forget just how far 1976 seemed from 1986, now that the digital age has transformed our experience of culture into a perpetual present: by the time I purchased the first Ramones LP as a kid in 1986 (vinyl consumption already being something of an affectation, given how the bins of Sam the Record Man and A&A were filling with newfangled CDs), it might as well have been a medieval text. What little signs of punk that persisted in the UK in 1986 were largely the doings of terminally uncool Oi bands, skinheads, and other backward-looking types who used The Exploited’s “Punks Not Dead” as a rallying cry; elsewhere, the signifiers of punk had become elements of fashion, like the coif sported by Daniel Day-Lewis (Cox’s original choice for Sid) in Stephen Frears’ My Beautiful Laundrette.

Musically, punk had been succeeded by the wild experimentalism of post-punk, before interest turned to the glossier distractions of synth pop and the New Romantics; Live Aid and the ascendance of U2 marked the onset of a dull, respectable middle age for rock, while hip-hop, thrash metal, and techno now constituted the musical vanguard once represented by punk. Even one of punk’s prime movers had himself moved on by this point: the multi-coloured, gravity-defying dreads that Lydon sported on that MTV clip points to the succession of guises he’d adopted (from doom-disco wastrel to mock-corporate proto–Patrick Bateman to hard rocker) since dropping the “Rotten” handle and forming his first post-Pistols outfit, the far more radical (and equally aggressive) Public Image Ltd. (He’d also begun his own film career as an actor, though he wouldn’t realize his screen potential until the producers of I’m a Celebrity… Get Me Out of Here! came calling in 2004.) 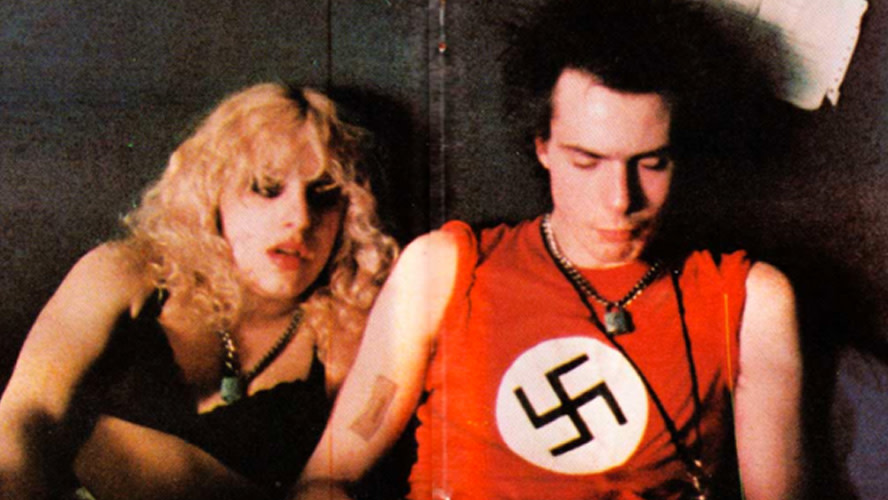 Given this cultural context, what makes Sid and Nancy a milestone is that it marks a decisive shift in the cinematic representation of punk: where the first wave of punk cinema was all about trying (often in vain) to capture the rude exhilaration of the movement, the second wave (inaugurated by S&N) was about commemorating it, reimagining and repackaging it at a safe remove. One reason why the second wave was so successful at this was the lack of primary documents from the first: punk had simply moved too fast to be fully captured by cinema. That said, documentaries like 1978’s The Punk Rock Movie (comprised of Super 8 footage shot by DJ and Clash compadre Don Letts during punk’s first flourishing at the Roxy club) and Lech Kowalski’s D.O.A. (whose grainy glimpses of the Pistols’ stormy US tour were duly simulated in Cox’s film) did manage to convey some of the moment’s velocity. Derek Jarman put his own inimitable and unabashedly queer spin on punk in Jubilee — which jumbles together the Elizabethan and modern eras with the help of Siouxsie Sioux and Adam Ant — while Breaking Glass used the safety-pin subculture as the setting for a more conventional music-biz drama. 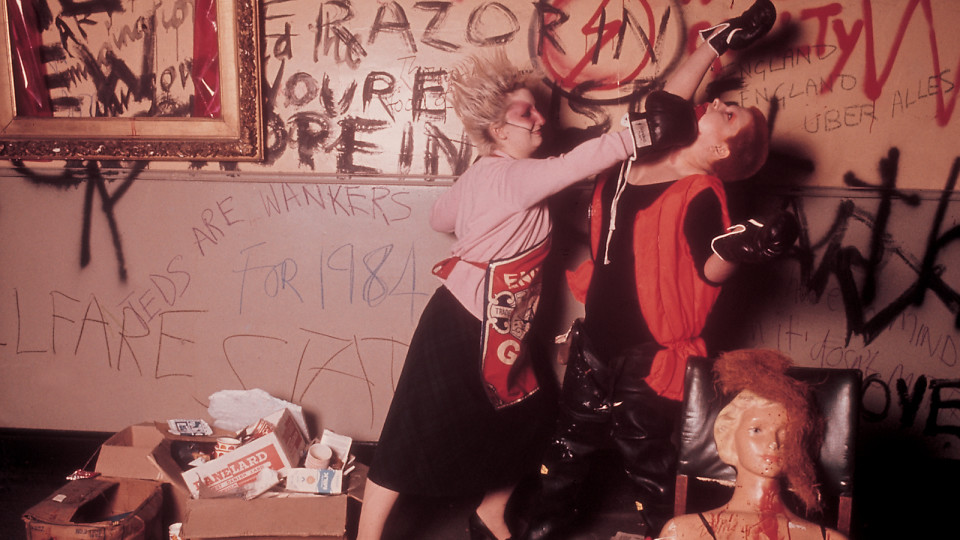 While Jarman was one of the few British directors to really exploit that gob-covered zeitgeist, indie and exploitation filmmakers in the US were better poised than their UK counterparts to milk this punk thing and do it fast. Roger Corman's planned teen-rebellion comedy Disco High quickly became Rock ’n’ Roll High School after director Allan Arkush convinced the producer to turn it into a vehicle for the Ramones. Susan Seidelman put another CBGBs icon, Richard Hell (sans his Voidoids), in front of the camera for Smithereens, which became the first American indie to compete for the Palme d’Or. Two years earlier, Dennis Hopper — displaying some of the same savvy he showed when he combined the late-’60s biker-flick craze, his own taste for European arthouse fare, the nascent counterculture and Steppenwolf’s only two good songs in Easy Rider — had cottoned on to the punk scene’s exciting and dangerous developments and included a gig by the Pointed Sticks in his Vancouver-shot Out of the Blue. (Oddly enough, B.C. would also host the shoot for another underappreciated punk flick: Ladies and Gentlemen, the Fabulous Stains, which starred a teenaged Diane Lane as the spiky-haired leader of a fictionalized version of The Runaways.) 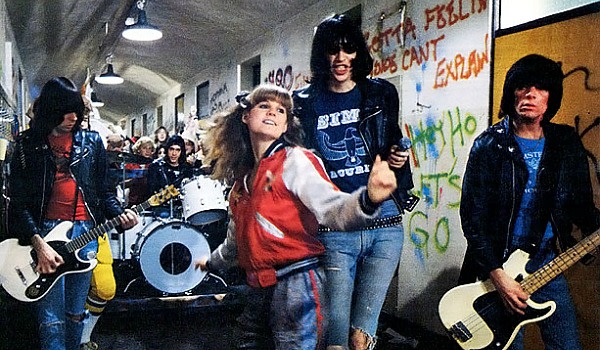 Of course, making punk cinema’s definitive statement was one of the many un-humble ambitions of Sex Pistols manager Malcolm McLaren. Along with his crew’s resident filmmaker Julien Temple, McLaren devoted most of his energies (and the band’s remaining funds) during the Pistols’ final phase to the production of a larkish mockumentary whose true objective was the celebration of his own genius. Accurately described by Lydon as “a pile of rubbish,” The Great Rock ’n’ Roll Swindle — which roped in everyone from sexploitation auteur Russ Meyer to Great Train Robber Ronnie Briggs to singer Edward Tudor-Pole (who McLaren wanted as Lydon’s replacement) — was widely regarded as both a grotesque folly and an embarrassing relic when it was released in 1980, although wannabe punks from all around the world studied it closely anyway. (To be fair, it did inspire Sid and Nancy’s most exhilarating sequence, a recreation of the Swindle scene in which Sid performs his horrendous cover of “My Way” before firing a gun into an audience of swells; in Cox’s version, a blood-spattered Spungen is Sid’s most adoring victim.) 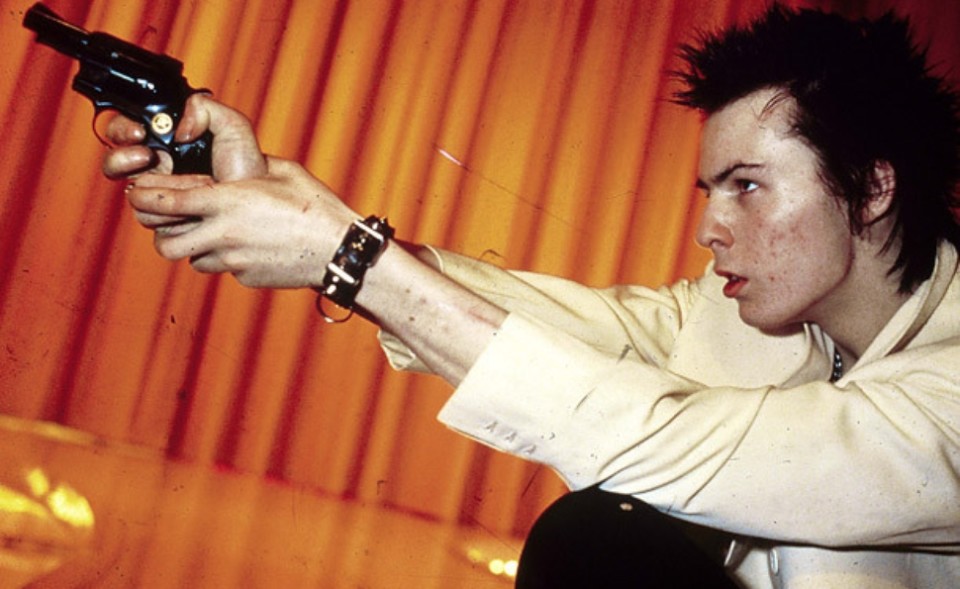 Even as McLaren was failing in his efforts to turn the Pistols story into a big-time Hollywood production, some of the rougher corners of Los Angeles were becoming surprisingly fertile ground for punk — albeit a hardier, more brutal version than the scenes that had already vanished in London and New York, and one which soon splintered to create yet another generic offshoot: hardcore. Penelope Spheeris immortalized the Germs’ Darby Crash, Fear’s Lee Ving, and other heroes of West Coast punk in The Decline of Western Civilization, and then used this world as the backdrop for her harrowing teen drama Suburbia. Meanwhile, Cox — who had come to L.A. from Britain in 1977 to study at UCLA — used the scene as the setting for his epochal first feature Repo Man, starring Emilio Estevez as the era’s quintessential white suburban punk. 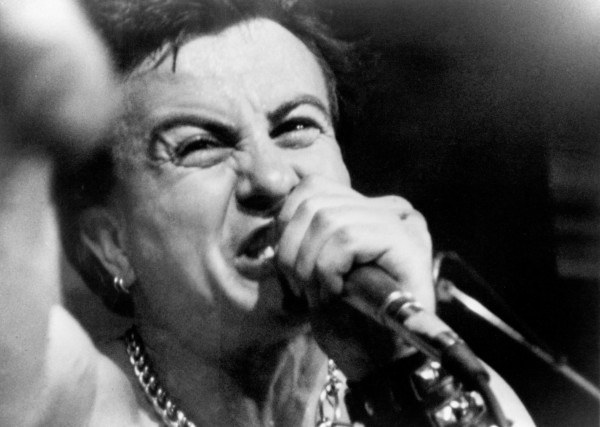 Lee Ving performs in The Decline of Western Civilization 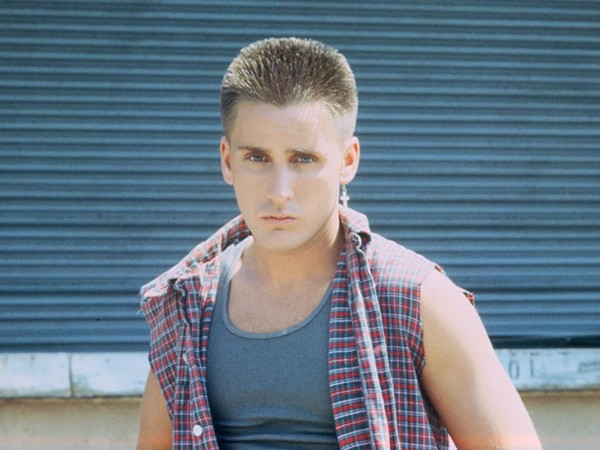 Yet there was a world of difference between what Cox and his peers did in these earlier filmic representations of punk (including an infamous episode of TV’s Quincy, later the subject of a musical tribute by Spoon) and what the filmmaker would do with Sid and Nancy. The fantasy ending and intermittent anachronistic intrusions were only the most blatant of Cox’s fiddlings with reality. The film tends to reduce many of the figures in the Pistols saga to cartoons even cruder than the ones in The Great Rock ’n’ Roll Swindle — a bonehead American rock star loosely based on the New York Dolls' Johnny Thunders (Spungen's ex-boyfriend) is especially egregious, as is enlisting an identifiably white actress to play X-Ray Spex’s Irish-Somali frontwoman Poly Styrene — and Lydon was not alone in condemning Cox for glamorizing the heroes’ heroin use and punk’s propensity for violence.

On a more rarefied level, Sid and Nancy also established the punk moment as another of cinema’s funtime playgrounds — a historical fantasyland that filmmakers could simplify, stylize, and more or less portray however they chose. Key works in this second and now seemingly interminable phase for punk cinema range from Temple’s masterful (if self-congratulatory) Pistols doc The Filth and the Fury to a bounty of biopics — including Michael Winterbottom’s 24 Hour Party People and Floria Sigismondi’s The Runaways — that, in the tradition of Sid and Nancy, seek to subvert the genre’s conventions while still satisfying its precepts. As fun and inventive as these movies can be, they contain none of the elements of spontaneity and recklessness that marked punk cinema’s first wave. To paraphrase the Pistols, these simulations are often pretty, but they’re also often pretty vacant.

What makes an Auteur Rock Doc?

The *Car Wash* soundtrack marked the move from Motown to disco