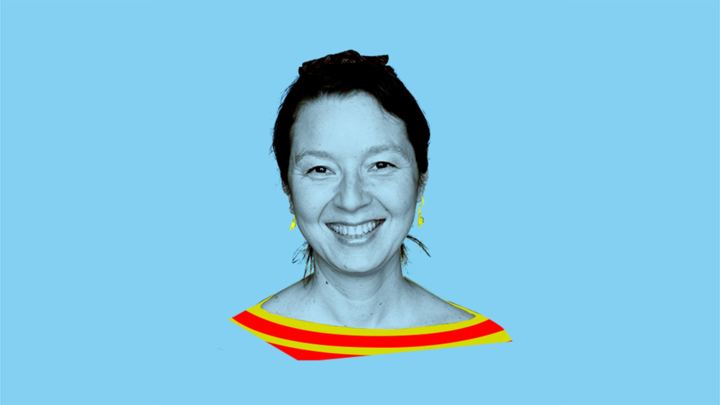 How Do You Define Yourself?

It took a near-fatal car crash to make Canadian animator Ann Marie Fleming a filmmaker. In fact, the accident, which happened when she was studying art and animation at the Emily Carr University of Art and Design, led the invention of her most iconic character: Stickgirl, who also serves as the artist’s alter-ego. Stickgirl was the face of Fleming’s last animated feature, Window Horses, which premiered at TIFF ‘16 and was included in Canada’s Top Ten Film Festival. The filmmaker has been a fixture at TIFF ever since her short film You Take Care Now (1989) played at what was then called the Festival of Festivals. Often making work about her Asian heritage and family, Fleming discovered her artistic identity in listening to the stories of her grandparents, who immigrated from Hong Kong. She is also an ambassador for TIFF’s Share Her Journey campaign, which commits to the advocacy and visibility of women in film through a five-year pledge to raise funds for their career development. In an email exchange, Fleming explains how the Star Wars cantina scene sparked her imagination, why there will always be people who doubt you, and how spending hours in a room with Stickgirl led to some of the most powerful moments in her life.

Do you remember the first time you were drawn to films and making art?

My maternal grandfather was a radiologist by trade but a photographer by hobby. I remember having my third (or was it fourth?) birthday in Hong Kong at the children’s hospital where he worked. He brought in a bunch of 8mm animated films to show the patients. Chili Willy was a standout for me. When we all moved to Vancouver, he set up a projection booth in his basement. I spent my summers at a school for the arts making up stories and shooting variety shows with my grandfather’s VHS portapak. Although I was never encouraged to go into the arts — I was a girl and an immigrant — it was always in the air. I found out much later in life that my grandmother’s side of the family were actually incredibly successful world-travelling entertainers, acrobats, and magicians. My grandmother was also apparently friends with an associate of Walt Disney's we called “Uncle O.B.,” but none of that meant anything to me as a kid; I was just trying to figure out how to become a doctor.

I was also the kid arguing (mainly with boys) about how many drawings it took to raise Superman’s arm above his head. Later, I tried to get elected as student-body president by drawing comic strips with Woody Allen’s cartoon character endorsing my candidacy. I didn’t win.

Which movies and TV shows inspired you during your childhood and teenage years?

My fascination with animation was sealed by the cantina scene in Star Wars. The moment where I knew I had to become a filmmaker came when I saw Peter Greenaway’s A Zed & Two Noughts. It had so many very specific images I had been thinking about, dreaming of, and had experienced in real life. Then, I saw Atom Egoyan’s Family Viewing. So much of me wanted to talk back to the screen and start a conversation with the characters.

I was a voracious consumer of media when I was a kid, but it was mainly what was available on TV. The images and families on the small screen were so different from what I knew. The CBC series Adventures in Rainbow Country, with its images of log cabins, float planes, and canoes, was a wild dream compared to my suburban existence. My father took us to war movies, my mother forced us to watch The Pink Panther over and over, and when I was old enough to make my own choices I watched anything with a subtitle. The Vancouver International Film Festival introduced me to filmmakers like Zhang Yimou, Pedro Almodóvar, and Bille August. As a teenager, I felt for the main character in Gillian Armstrong’s My Brilliant Career, but the first film that made me feel devastated as a woman was Jane Campion’s Sweetie.

From this strange medley, I realized I wanted to acknowledge my experiences with work that expressed my point of view that I did not see in the dominant media. My grandmother died during my first year of art school, and that began a lifetime of trying to express something of the universal in the personal.

__Why did you decide to go to school for animation? What was your experience like at art school? __

I went to the Pacific Cinematheque to see a program of short animation and saw Martin Rose’s student film Study of an Apartment (1985). It was a paper-cut-out film — he animated a tea bag infusing a cup of hot water. The film entranced me so much I immediately put a portfolio together and applied to his animation department at Emily Carr. The school had really encouraged women to enter that year, as it was such a male-dominated field. Wendy Tilby’s student film Tables of Content (1985) was a work of such maturity and beauty that I wrote a letter to her animation instructor, Hugh Foulds, waxing lyrical about it. I think that was the deciding factor in him letting me into the program.

Art school was not easy for me. I was actually asked to drop out of the program in my first year and was told by the program I was taking up the space of someone with talent. I would maybe make a good accountant, but not an artist. Luckily, this didn’t phase me — I was in school to learn and was not going anywhere. After I made my first film, Waving (1987), about my grandmother, I was told I could do whatever I wanted — just please, stay in animation. Then, I was hit and run over by a car.

Your car accident was the inspiration for your signature creation, Stickgirl, who appears in your latest film Window Horses. How did that traumatic event lead to her invention?

I created Stickgirl because that’s all I had the energy to draw. She represented all the strength I had at that time. That year, I began to animate an 80-second story of my life titled *So Far So… *(1992), but I didn’t have the strength or the funds to finish the film. Four years later, it screened at TIFF. I now also make live-action films, so Stickgirl was something I returned to between projects as a way to play and have control of all the elements. When I animate her, it feels like the closest I get to being a little girl in my room writing letters to my grandmother, who was still in Hong Kong at the time.

Did you ever have a moment making a film where you felt underestimated, belittled, or like you weren't being taken seriously? How did you cope, and what did you learn?

THIS ALWAYS HAPPENS! Sometimes, it happens from the people you expect would support you, or have your back. I always have to prove myself to someone on a project, no matter how small, or in what capacity. What did I learn? That this is always going to continue! You have to stand up for yourself, you have to believe in yourself, and you have to try not to take it personally. Sometimes, people need to be educated on your strengths and abilities. I hope there comes a time when this isn’t the case, but because I am always working out of my comfort zone, this may be something I have to live with.

__What role has TIFF played in your career as a filmmaker? __

I have had 18 films at TIFF. Two have won Best Canadian Short Film (Blue Skies, 2002, and New Shoes: an interview in exactly 5 minutes, 1990), and two have been on the Canada’s Top Ten List (Window Horses, 2016, and I Was A Child of Holocaust Survivors, 2010). My first short film, You Take Care Now (1989), is now on the Canada 150 Essential Cinema list. The Toronto Festival of Festivals was a very different animal, but what was always great was the community. Back then, Canadian films were always covered by local and national media, journalists followed your career, and you were standing on the same stage with filmmakers from all over the world. You had the opportunity to meet them too.

Today, TIFF is a pre-eminent festival in a very crowded field. As a global leader, it is important they have proper representation on all fronts. The industry is here at TIFF: the film buyers, the journalists, the producers, and the Festival is a tastemaker. When I first started having my films in the Festival, the proportion of female to male directors was five percent, including short films. This year, it is at 33 percent. That’s better, but is still confusing. Now that the playing field has levelled for entry into film production and many historic obstacles have been dismantled, why aren’t there more women in film? Through the Share Her Journey campaign, we can put a global spotlight on women in film and animation. We need to take advantage of it, wave our flags, and WATCH FILMS BY WOMEN. There are many female Canadian filmmakers TIFF has supported over the years, including Patricia Rozema, Mina Shum, Deepa Mehta, Kari Skogland, Jennifer Baichwal, Léa Pool, Ingrid Veninger, Alanis Obomsawin, Julia Kwan, Dawn Wilkinson, Sarah Polley… and those are just some of the feature filmmakers. With more and more films made by women, it will get harder and harder to get into the Festival, but that means more great voices and great films.

__What do you love and hate about the process of making something? __

When I am alone drawing in my room with Stickgirl, I laugh and cry because she moves me so much. She is so brave, funny, open, non-judgemental, and much more rudimentary than the character you may know as Rosie Ming in Window Horses.

I am speaking as an independent filmmaker who tells her own stories. But ALL filmmaking is hard! A good film is a minor miracle, and there is so much of what we do that is not creative. It is just perseverance. I take off my hat to all the people — especially the women — who make work despite the odds. Rarely is anything given to you, and you have to earn every inch. It takes a combination of talent, smarts, stubbornness, charm, business acumen, patience, tolerance, ambition, work ethic, optimism, incredible HR skills, and sheer tenacity to get anything made. You better have something pretty important to say to keep you going through all of it.

Filmmaking in Between Cultures