Hauling Gear with Win and Régine 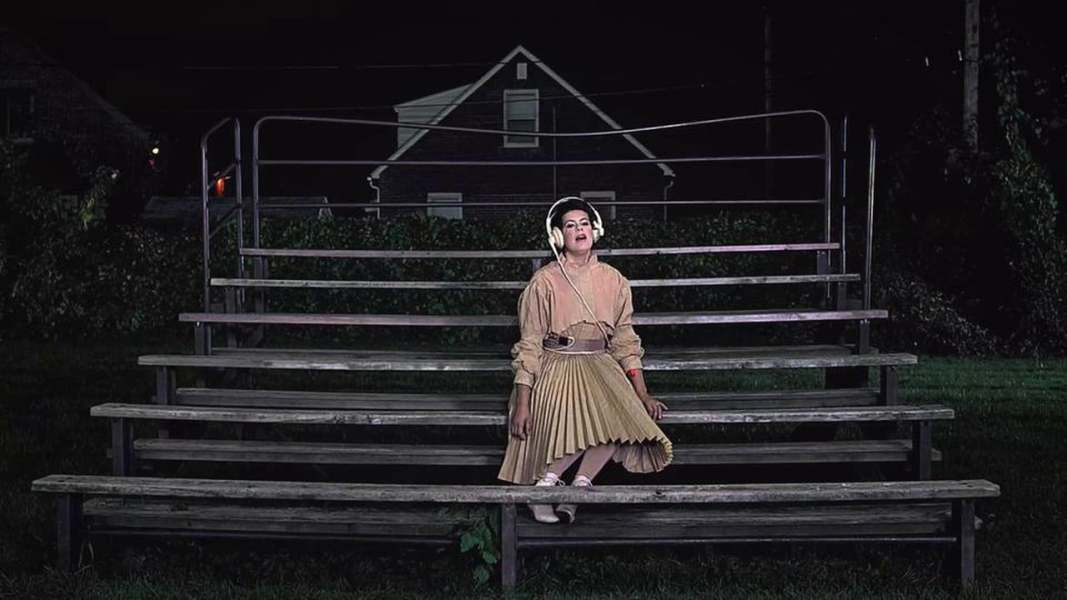 Hauling Gear with Win and Régine

This week, Arcade Fire will release their fifth studio album,* Everything Now*. As the band's recent fake news articles trolling Stereogum and Billboard attest, their new singles “Everything Now,” "Creature Comfort," "Signs of Life," and “Electric Blue” show the band at their most joyful and discofied (Daft Punk’s Thomas Bangalter is a producer, as well as Pulp bassist Steve Mackey), while also serving as an inner monologue for insecure mid 30’s hipsters everywhere. (Sings Butler on “Signs of Life”: "Those cool kids / Stuck in the past / Apartments of cigarette ash.")

But it takes a village to raise an indie rock supergroup. One of Arcade Fire’s many, many collaborators is Montreal web artist and videographer Vincent Morisset. He’s directed three music videos (“Neon Bible,” “Sprawl II,” and a “Reflektor” project with Google), designed two album websites (for Funeral and Neon Bible), art-directed two album covers (The Suburbs, Reflekor) and shot a feature-length documentary (2008’s Miroir Noir) over the band’s 10-year history. But it’s Morisset’s fanciful contribution to the song “Neon Bible” that became known as the first interactive music video ever. Designed with your cursor in mind, a single click can make Win Butler’s hands juggle apples, shuffle a deck of playing cards, or manifest your own interactive rainstorm. The video also made the band and Morisset pioneers of a new digital age of music promotion. You can play Neon Bible every day in the gallery space of TIFF Bell Lightbox until August 13, as part of an ongoing Canada on Screen programme.

While he was in town debuting his Neon Bible exhibition, we spoke to Morisset about how he first encountered the band, how one “directs” a website, and why Arcade Fire are not only his artistic collaborators, but also his family.

When was the first time you met Arcade Fire?

I've known Régine [Chassagne] since I was 15. We met at a dance. I went to a boys-only school, so a couple of times a year they would do this cheesy ballroom dance and invite girls from other schools. We had common friends and both grew up on the south shore. Our paths continued to cross — we worked at a summer job together, we did theatre classes, then we went to the same school.

In college, Régine started a medieval music band called Les Jongleurs de la Mandragore. She's incredibly talented — whatever she's into is interesting — so I was a fan. They started the band with Win and a couple of other friends. It snowballed from there. I've been at the forefront since the very, very beginning. 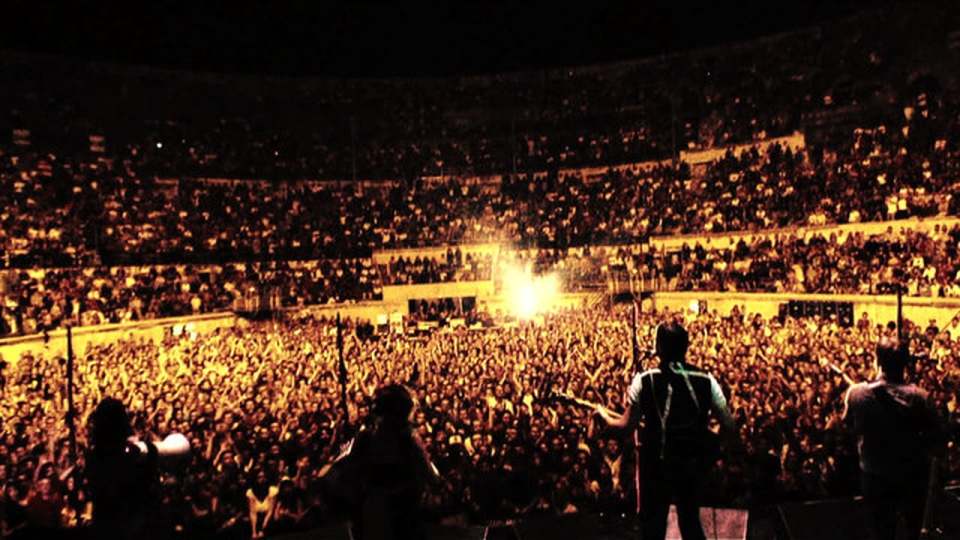 A still from the 2008 Arcade Fire documentary Mirroir Noir, directed by Vincent Morisset.

How did you get involved designing websites and music videos for the band?

They asked me to design their website after Funeral. It was at a time where the music industry was shifting: there were music blogs and MTV was airing bad reality television like Pimp My Ride. Music videos weren't on traditional channels anymore, so people were looking at YouTube and listening to the album on their phones and computers. There was something about Arcade Fire and the spirit they created that coincided with blogs and this different model for the music industry. They were independent, which was really liberating and made us able to do things outside of the boundaries and established rules.

__How did Arcade Fire find such a huge audience at a time when the music industry was collapsing? __

We were just figuring things out, playing by instinct of how to connect with an audience without any filters or middlemen. At the same time, we were also re-visioning the visual companion of an album because we’d lost the experience of the booklet; you just have a bad JPEG, and that's it. So how do you create a mythology and a world for an album? For me, everything that exists online is part of the same desire to create something that could resonate with the music. The band was really involved in pitching ideas and trying to create something that would be coherent.

__So you created “Neon Bible,” the first interactive music video. Why did you want the experience of the video to be driven by the user? __

When we did the website for Funeral, it was this Monty Python thing where you had to throw a marshmallow at a sphinx to get to the gates of the show; it was really cryptic. The band wanted me to design an elaborate shell with the usual content in it. So with the website for Neon Bible, I suggested that instead of putting all of our energy into a shell, why not direct our time into creating original content?

They asked if I was interested in doing a music video, and I said, “But it doesn't air on TV anymore.” YouTube at the time was still really shitty — you would put a lot of energy into something and all people would see was this tiny, pixelated window — but that's where you would reach kids.

I had gone to university for film studies and there was this new program called “multimedia.” I changed paths in the middle of school and learned how to code. A bit of me was a geek; the other part wanted to tell a story, and I loved the moving image. I was just pragmatic — I knew people would watch this on a computer, so why not take advantage of the narrative and experiential potential of that platform? 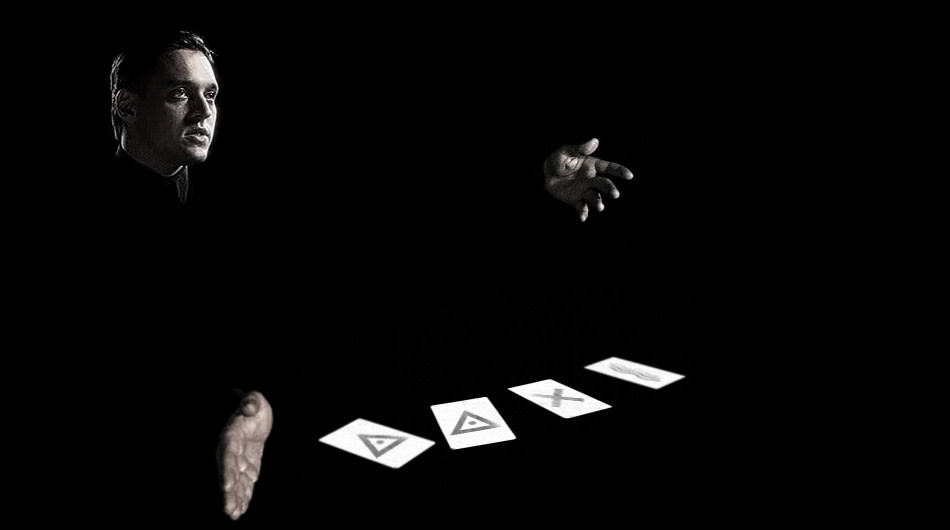 How did you pitch the concept for “Neon Bible” to the band?

I used an analogy: "Imagine you're in your living room and the people who tell you the news turn, look you in the eyes, and talk to you." It was that “WTF” feeling. When the video launched, it had a bizarre effect on people because we were playing with film grammar. There was a title card in the beginning. I was working with a George Méliès vibe of magic and a sense of timelessness. There was no interface, no buttons, so people have to figure it out. Then they see there's no rules and you can do whatever you want.

That was the first time I signed my work "Directed by." That tiny detail changed how people saw my practice, because at the time it was really raising eyebrows: “You directed a website?" Historically, web has had more of a designer vocabulary where you would have a project manager, an art director, a developer. It was a strategic move to change the way people see that medium — that online, people can tell a story, they can generate emotions through a spectator. I was coding in Flash and was an average coder, but now at the Music Video Awards, there's an interactive category.

Is Arcade Fire interested in pushing the boundaries of music videos and content, and is that why they’re one of the biggest bands in the world?

Being groundbreaking, or the first to do things, is not what drives them. But they’re curious, open-minded, and never stand still. That’s what makes an artist in any medium last. I’m always curious for the next album because they have a strong signature to their work. But their work also often takes us off guard, surprises us, and explores new territories. Sometimes they play with technology, but always in a context where it's a statement on the world we’re in. They're also crazy talented musicians and are really generous onstage.

__Do you have any funny stories about the making of the video? __

Actually, the hands in “Neon Bible” are not his. (Laughs) Win was a perfect hand actor, but I needed to make something that would be interesting for the length of the song. We over-makeuped him and he looked like a little baby, so we had to take almost everything off. *(Laughs) *

At first, I had envisioned also having Régine in the video, so we shot the whole song with Régine in a black turtleneck. In the end, we said, "You didn't make the cut," but we did another music video with her during The Suburbs called "Sprawl II (Mountains Beyond Mountains)." That video’s the best. You control it by dancing in front of your webcam, so the faster you move, the faster the frame rate is. If you stop, it creates choreography inside the choreography — a bit like an animated GIF — that moves with the rhythm of the song. That was a moment where I wanted to experiment beyond the mouse. I’d asked myself what the most primitive interaction with music is and realized it's dancing. This was a song about wanting to break free of the suburbs. The protagonist was a person who doesn’t fit in. In the actual interaction with the video, there was a liberating feeling of "Oh, I'm not supposed to dance in front of my laptop." Still, you do it.

Well, their songs are incredible. They're involved, they're generous, they're smart, they're funny, and they give you space. It’s this sweet spot where they have good instincts, but are also open-minded and leave room for you to do your thing. It's like being in a big family because it’s often the same people collaborating, so there's a sense of community. They’re just my long, good friends. We're collaborators, but it goes deeper than that.

__That sense of trust between a filmmaker and a band is very important. Do you think indie rock bands these days are more reluctant to take risks now that there are smaller budgets? __

It's a tricky world, especially these days. The music industry collapsed, so in a sense, bands have less and less to say because there's no money. There’s a lot of good stuff happening in music videos, but at the same time, it's getting harder and harder to finance them. I just learned the MuchFACT grant died; it's symptomatic of an industry looking for new ways to communicate with fans. As a filmmaker, music videos are a great place to do interesting stuff because you have a given audience with an open heart. To be able to connect to a community is very cool for a director.

Do you have a favourite album or period of Arcade Fire’s work?

Artistically, I don't think so — I love them equally. I will say there’s a bit of nostalgia for the early days when we were touring Funeral. I was their semi-roadie, taking pictures of the band, setting up their projections and video, selling their merch, and helping them load up their gear at the end of a show. Those are beautiful memories, and now they're one of the biggest acts in the world. So of course, I am nostalgic for when we were just a bunch of friends, having fun at their shows.