Part of a series of profiles of the great actresses featured in this season’s flagship TIFF Cinematheque programme Bergman 100: The Ingmar Bergman Centenary.

The long close-up of Harriet Andersson’s face at the end of Summer with Monika (1953), in which the actor stares defiantly out at the viewer and breaks the cinematic illusion, has been inscribed in both the history of cinema and the collective memory of cinephilia. “This is the saddest shot in the history of cinema,” Jean-Luc Godard wrote in his 1958 review of the film, praising Monika as Bergman’s masterpiece to date — a mastery that hinged significantly on the director’s infatuation with his new star’s natural beauty and intense physical presence. In this story of two young lovers who rebel against their stuffy social milieu and spend a summer of love camping out in the Stockholm archipelago, Bergman’s camera frames Andersson with a mixture of tenderness, awe, and erotic fascination, as if it wishes to dissect and demystify her enigmatic femininity but is ultimately unable to do so. Even as her Monika transitions from sun-kissed fantasy to nagging housewife to unfaithful spouse throughout the course of the film, her shallowness and self-interest coming into ever sharper focus, Andersson retains the mysterious power she possessed from the beginning of the film — a power that is reasserted in that famous final shot.

In the next two years, Bergman cast Andersson in four films — Sawdust and Tinsel (1953), A Lesson in Love (1954), Dreams (1955), and Smiles of a Summer Night (1955) — in almost all of which she plays characters similar to her breakthrough role of Monika: a naïve, selfish, fickle and flirtatious young working-class girl given to rapid mood swings, emotional outbursts and erratic, childish behaviour, a spontaneous vivacity that stands in stark contrast to the depressiveness, hesitancy, or exploitative cruelty of her (frequently older) male suitors. In Sawdust, she plays the horseback rider Anne, mistress of the middle-aged circus director Albert (Åke Grönberg), who spitefully embarks on an affair with theatre actor Frans (Hasse Ekman) when Albert begins contemplating returning to his estranged wife and children. 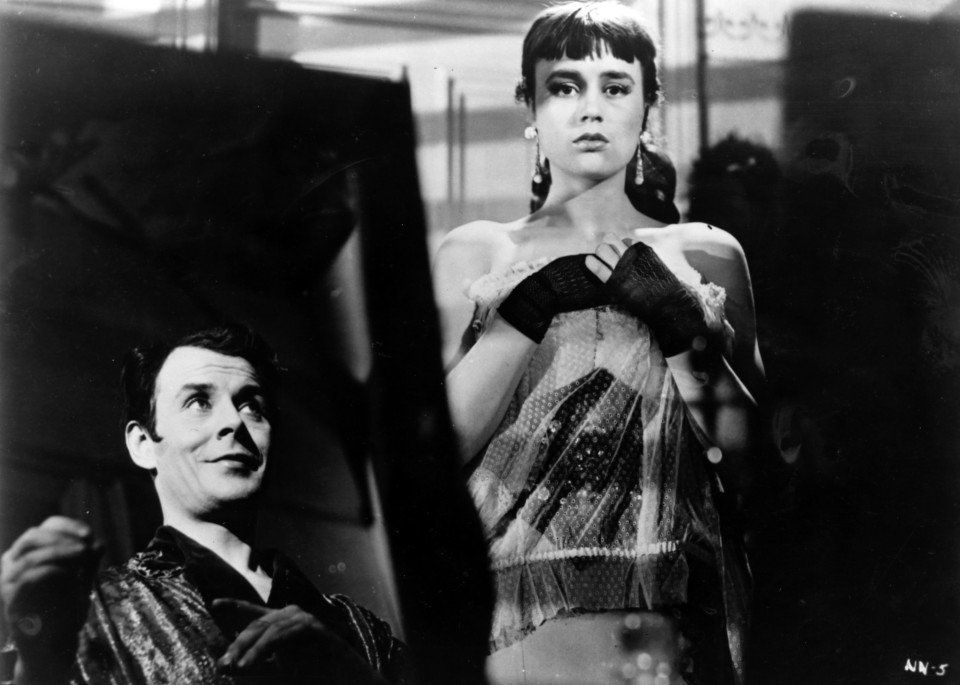 Hasse Ekman and Andersson in Sawdust and Tinsel

The initial encounter between Anne and Frans — an erotic game of power and manipulation that begins when the actor interrupts Anne backstage as she is admiring herself in a mirror, and, bewitched by her beauty, almost instantly begs her to sleep with him — is a marvellous example of Andersson’s ability to present contrasting emotional behaviours within a single scene. At first baffled by Frans’ alternating flattery and insults, Anne then heatedly bites his ear and degrades him; finally, she allows him to kiss her on the lips, but regrets it soon thereafter. Thirty minutes later, they confront each other again, with the balance of power considerably shifted.

As Robin Wood has pointed out, in Dreams Bergman contrasts Andersson’s Doris, an aspiring young model, with the mature, worldly fashion photographer Susan, played by the regal Eva Dahlbeck. When Doris is window shopping at an expensive quartier, she gets acquainted with the wealthy middle-aged consul Otto (Gunnar Björnstrand), whose rather desperate attraction to her is fuelled by loneliness and despair. He insists on buying an expensive gown and pearl necklace for her, and while at first wary, Doris gradually allows herself to be persuaded by Otto’s manipulative spiel. Mostly silent throughout this first encounter, Andersson conveys Doris’ surprise, suspicion, and craving for the pricey gifts through her sensual, expressive face. 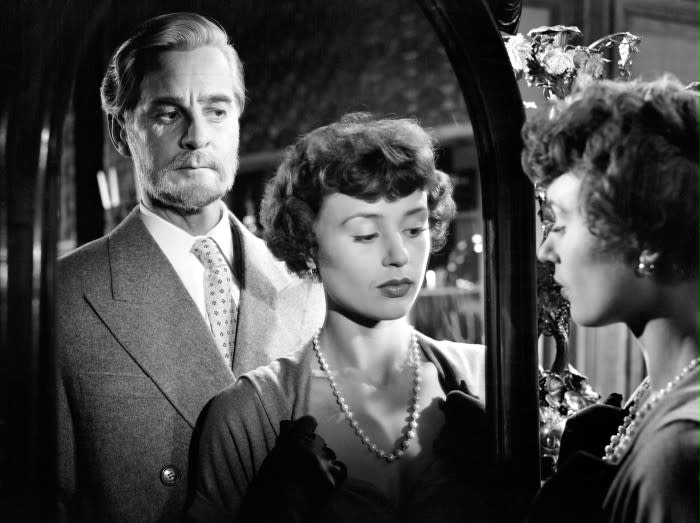 Gunnar Björnstrand and Andersson in Dreams

Later, Doris accepts Otto’s invitation to his luxurious home, where she dons the gown, gets tipsy, and becomes increasingly cheerful, talkative, and childishly exuberant — which paradoxically makes her morose, would-be seducer ever more serious and depressed. What could have been a purely comic scene is suddenly, brutally undercut when Otto haughtily and disdainfully orders Doris out of his house, to which the unguarded and uncomprehending young woman responds with tears of deep and genuine distress.

That ingenuousness, the depth of feeling that underlay her characters’ coyness and frivolity, was what made Andersson more than just a “love goddess” in Bergman’s cinema, and what made her more than equal to the task when the filmmaker started pushing his cinema into darker and more complex territory. In Through a Glass Darkly (1961), the first panel of the director’s “Trilogy of Faith,” Andersson plays Karin, a schizophrenic young woman trapped between the world of reality and the terrifying world revealed to her in her mind. Despite the differently inadequate efforts of the three men around her — her self-involved writer father (Gunnar Björnstrand), caring but ineffectual husband (Max von Sydow), and uncomprehending teenage brother (Lars Passgård) — Karin gradually succumbs to the grip of her madness, culminating in her famous vision of God descending as a spider. 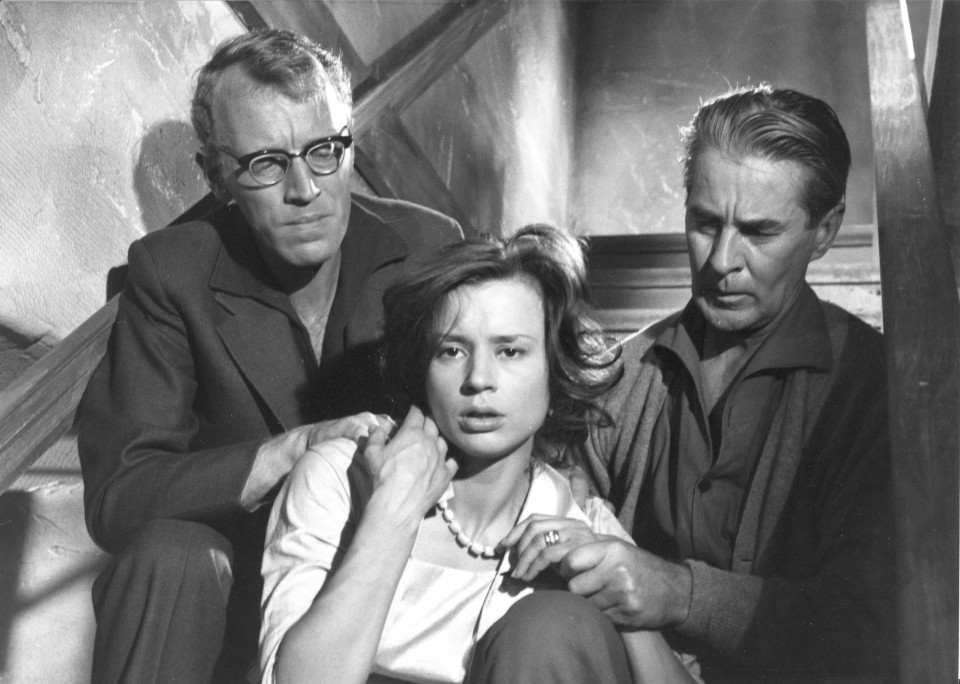 Max von Sydow, Andersson, and Björnstrand in Through a Glass Darkly

At first glance, Karin seems very different from Andersson’s previous characters: upper-class, educated, married, and afflicted with the kind of psychological torment that Bergman would explore further over the next two decades, most notably in his many collaborations with Liv Ullmann. However, Andersson’s remarkable ability to shift emotional registers within a single scene makes her ideal to depict Karin’s rapid mood swings, emotional instability and physical distress. In particular, Andersson makes Karin’s desire to see the face of God into a palpably erotic yearning, twisting her tortured body in the space of an empty room and voicing her entranced thoughts through full, open lips.

Following their next collaboration, the intentionally frivolous comedy All These Women (1964), Andersson and Bergman would not work together again for almost a decade — and when they did reunite, the actor yet again took on what seems to be a very uncharacteristic role. In Bergman’s symphonic masterpiece Cries and Whispers (1972), Andersson plays Agnes, a dying woman spending her final days bedridden in her family’s mansion in the company of her two sisters (Liv Ullmann and Ingrid Thulin) and devoted maid (Kari Sylwan).

In broad outline, Cries resembles Bergman’s earlier film The Silence, in which Thulin played the part of the slowly expiring woman, but Andersson’s Agnes is quite dissimilar in her suffering from that of Thulin’s Ester. Where Ester is in pain both physically and psychologically, unsatisfied with her life and beset with misery and regret, Agnes is at peace with herself and those around her, even as she is wracked with pain and haunted by the same traumatic childhood memories that afflict her sisters. 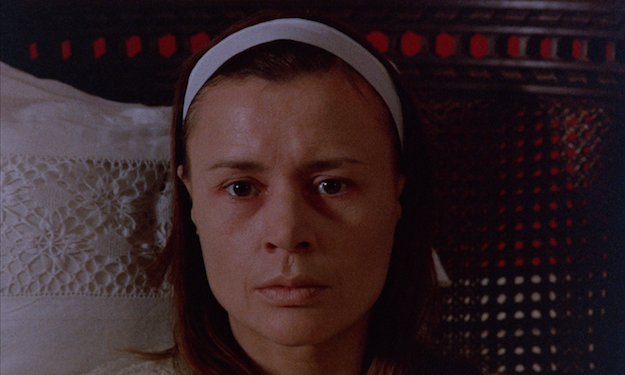 Andersson in Cries and Whispers

In Cries and Whispers Andersson’s ingenuousness becomes a moving serenity, the physicality that was always such a part of her performance style now concentrated in her open, expressive face. Near the end of the film, Bergman offers another close-up of Andersson, one that is very different from that which concludes Monika but which, once again, signals her departure. As Andersson looks into the camera, we hear her in voiceover as Agnes reads a passage from her diary, describing her happiest time during her illness: a fleeting moment when, momentarily relieved of the worst of her pain, she was able to move about the family estate, to be surrounded by those who love her and feel the warmth of their hands. This close-up is deeply poignant not only because of Agnes’ beautiful words, but also because of Andersson’s peaceful and resigned expression — a soft, graceful look that is comforting and heartbreaking all at once.

A Lesson in Love

Smiles of a Summer Night

Through a Glass Darkly with José Teodoro

Liv and Ingmar: Face to Face