Cinematic portrayals of relationships between homosexual and heterosexual men are frequently strained. Gays are often victims of violence (The Matthew Shepard Story, Milk) or predators themselves (Irreversible, Pulp Fiction). While an increasing number of films show positive interactions between gay men and heterosexual women (Sex and the City, Mean Girls), there are precious few healthy interactions with straight dudes.

Surprisingly, one of the first examples of this type of relationship appears in a highly censored period of American cinema. Commonly known as the Hays Code, the industry-imposed restrictions in place from 1930 to 1968 forbid onscreen depictions of homosexuality, curse words and negative depictions of clergy, among other things. But smack in the middle of that came the James Dean classic Rebel Without a Cause.

Helmed by bisexual director Nicholas Ray, it featured openly-gay actor Sal Mineo as Jim Stark’s best bud John “Plato” Crawford. Though they couldn’t explicitly state it, Dean, Mineo, Ray and screenwriter Stewart Stern reportedly worked to pepper the film with coded references to Plato’s queerness. See: a shot of pin-up Alan Ladd taped in his locker, his longing looks at Dean’s character, and of course, his chosen name, one of the classical Greece’s most well-known queers.

Despite his obvious homosexuality, Jim adopts Plato as a friend. Though there are numerous near-moves on Plato’s part (his invitation for Jim to spend the night and “make breakfast together” being one of the more obvious), Jim never balks at his attraction, sticking by him and protecting him at all costs from the town’s teenage toughs.

As gays gained visibility through the ‘90s, they gained increasing prominence onscreen. There’s the occasionally tender connection between failed actor David (Thomas Gibson) and cynical civil servant Bernie (Cameron Bancroft) in Denis Arcand’s prudish 1993 adaptation of Brad Fraser’s theatrical smash Love and Human Remains. But (spoiler alert!) Bernie turns out to be the homicidal maniac who has been knocking off local women and collecting their earrings as trophies.

For a truly positive portrayal of gay/straight friendship, we need to go to 2010 for Scott Pilgrim vs. the World. While Edgar Wright’s screen adaptation of Bryan Lee O’Malley’s graphic novel series doesn’t centre exclusively on this relationship, it remains a critical element. Scott (Michael Cera) not only cohabitates in a basement bachelor with his gay roommate Wallace (Kieran Culkin), the pair share a bed in the cramped space, often with whatever dude Wallace is currently shagging. Despite the disparaging witticisms he throws at Scott, Wallace serves as his primary support system, offering practical advice as he navigates the dating world. He consoles him in his darkest moments and never makes a move.

2012 brought us Stephen Chbosky’s The Perks of Being a Wallflower, adapted from his own book of the same name. Having long suffered with depression, Charlie (Logan Lerman) is nervous to enter high school. But that changes when he quickly befriends Sam (Emma Watson) and her gay stepbrother Patrick (Ezra Miller). Charlie is unfazed by Patrick’s sexuality, even after accidentally walking in on him fooling around with a dude. Later, he forcefully defends Patrick during an attempted gay bashing. Patrick remains a solid friend, never trying to take sexual licence with the vulnerable, younger kid.

Time doesn’t necessarily indicate progress however, as we see with straight director Andrew Nackman’s 2015 bromedy Fourth Man Out about a group of straight buds struggling to accept one of their own coming out. Rife with homophobic stereotypes, the film centres mostly on the main character’s struggle with just how gay all his prospective flings are and how tough it is to find a guy who’s just, you know, a guy. 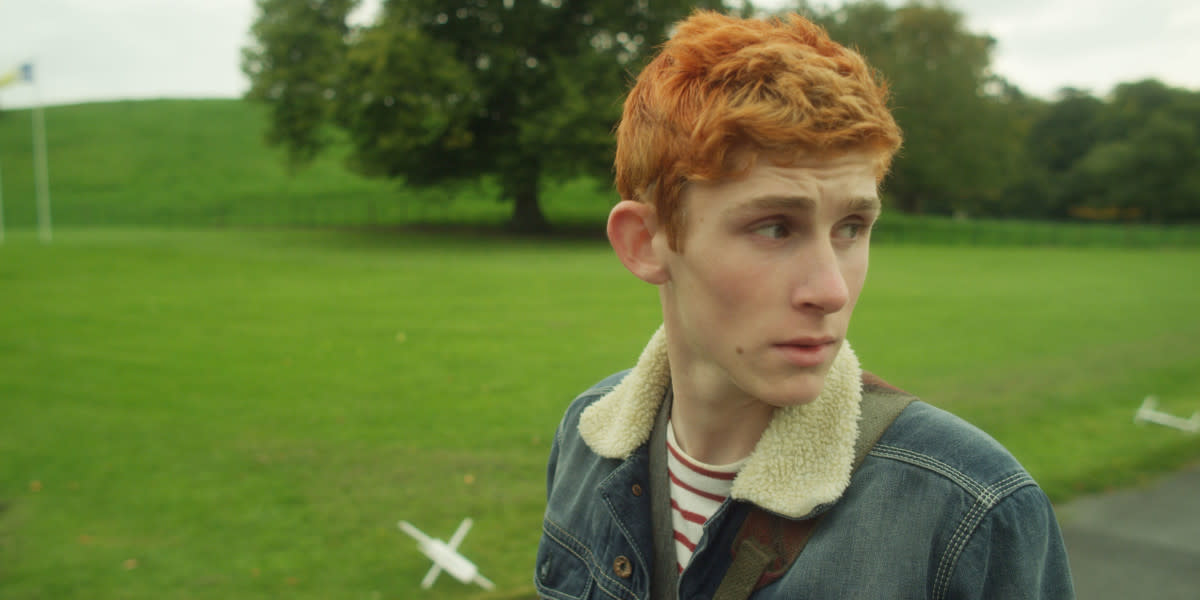 With so many missteps in the telling of these stories, Irish director John Butler’s Handsome Devil (currently playing TIFF 16) serves as breath of fresh air. Set against the mega macho and highly homoerotic backdrop of rugby-obsessed boys boarding school, Handsome Devil charts the development of an unlikely connection between a sports-hating outcast and his hunky jock roommate. Equal parts humour and heartbreak, it feels like a potential gay classic. At the same time, it’s a critical addition to the fledgling genre of gay/straight buddy comedies.

Contemporary cinema offers no shortage of LGBT-centric stories. But representations of healthy friendships between gay and straight men are still sorely lacking. Film can serve as both a mirror and a magnifying glass for society, simultaneously reflecting and blowing up our greatest obsessions and fears. The plethora of works (largely helmed by heterosexual directors) depicting gay men as either sexual predators, victims, or both are no accident. Indeed, they are a manifestation of how the mainstream world feels about us.

While my social circle has historically been populated by plenty of gal pals and a healthy dose of homos, the lasting connections I’ve formed with straight men are among the most important to me. I’m not suggesting straight dudes deserve a medal for not being homophobic. But the trust and the closeness I’ve found in these relationships have been critical in forming my own sense of self, helping me understand that my sexual desires are neither a danger to anyone else, nor a reason I should be victimized. A film like Handsome Devil offers the next generation of both queers and straights a new template for how they can interact with the world.