Godard in the ’60s: Breathless to Weekend

The passion, politics, and process behind the French master's defining decade 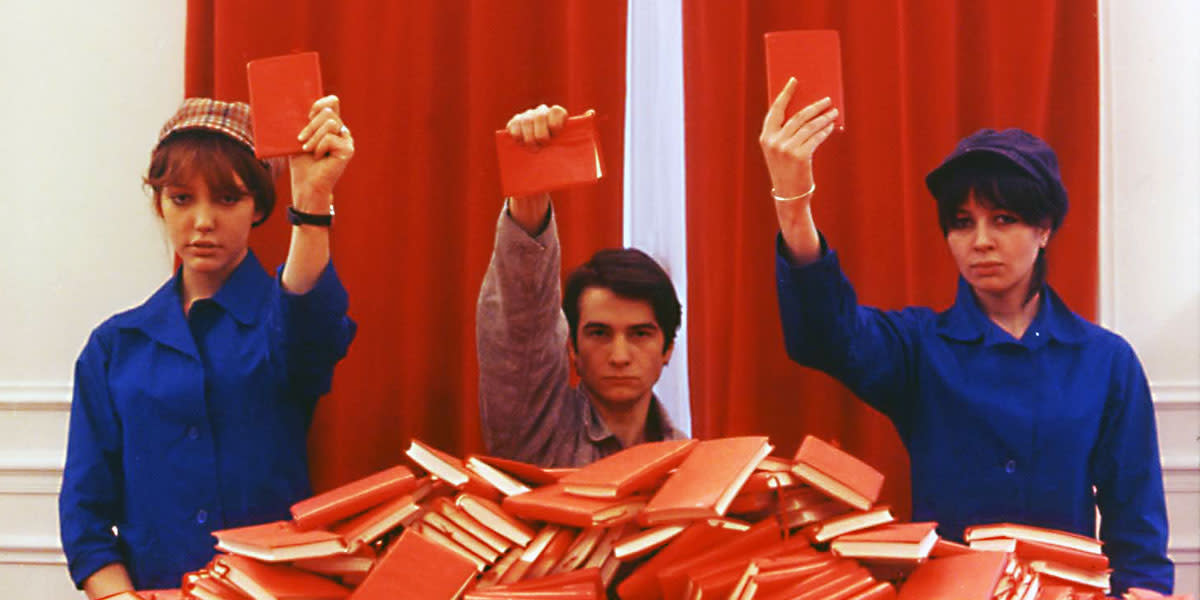 The films that Jean-Luc Godard made between 1959 and 1967 comprise one of the most influential and exhilarating bodies of work in the history of cinema. Presented in rare 35mm prints or digital restorations, these are the very definition of essential viewing. The TIFF Cinematheque retrospective Godard in the '60s: Breathless to Weekend begins Thursday, June 13.

Half a century later, the sheer exhilaration of Godard’s ’60s films is undiminished: the riffy, discursive rhythms and stuttering montage; the free-form black and white and retina-ripping primary colours of Raoul Coutard’s cinematography; the fragmented, polyphonic soundtracks, their uncued bursts of music and voice amplifying the visual pow of the ads, texts, and intertitles, the cars, guns, and consumer goods that swarm the screen as in a Rosenquist mural. Drawing on Brecht’s principles of alienation and distancing, Godard opened a fissure between the work of art and its spectator. Where traditional cinema conceals the gap between art and life with seamless narratives, unobtrusive editing, narrative closure, and consistency of tone and point of view, Godard’s cinema confronts the spectator with its status as a mediator and a construction. Even in his comparatively conventional first feature, Breathless, Godard draws the viewer’s attention to the process of narration and the nature of filmic language with his now legendary “jump cuts,” self-aware manipulation of genre, and incessant cinephilic references to the films and filmmakers he loved.

Breathless’ jokey tone, nonchalant violence, airy, seemingly improvised images, and extempore dialogue dense with references — to Picasso, Baudelaire, Velàsquez, Faulkner, and any number of films (by Preminger, Melville, Renoir, et al.) — announced Godard’s mode and mood: collagist and ironic, freewheeling and erudite, irreverently conflating high and low art through allusion, citation, and homage. Following the critical and commercial success of that epochal debut, Godard veered from the political (his second feature, Le Petit Soldat, was banned in France for its depiction of torture and terrorism in the Algerian War) to Demy-fied artifice (the musical spectacle of Une femme est une femme), from Brechtian analytics (the tableau structure of Vivre sa vie) to Rossellinian pedagogy (the stinging, Rossellini-penned anti-war satire Les Carabiniers). These early films reflect the influence of Barthes (and of Situationist guru Guy Debord) not only in their textual play and vision of Paris as semiotic circus, but also in their increasing fascination with the omnipresent signifiers of popular culture: how the structures of everyday life, the language of art, and the formation of individual consciousness are all determined (and deformed) by consumer capitalism. If anything, these films seem more apposite half a century later, when the two corrupt mercenaries of Les Carabiniers would probably be running for election to the US Senate, while our numb culture — malled, wired, and logoed to the max — is not so far from that of Two or Three Things I Know About Her, in which, Godard once said, “dead objects are always alive and live people are often already dead.”

Making good on his whispered directive in Two or Three Things to “start again from zero,” Godard declared fin du cinéma at the conclusion of his apocalyptic Weekend and entered the polemical, Maoist period of his filmmaking, finding new surety in a clear and unequivocal language of slogans and harangues. Even in the grip of doctrinaire ideological rigidity, however, he continued to delight in cinephilia and wordplay, and that joy persisted through the almost five decades’ worth of work that comprises the director’s so-called “late” period. As the now octogenarian filmmaker’s most recent work, The Image Book, gloriously testifies, Godard, still breathless, continues to draw on this initial period of his career for sustained inspiration.

Two or Three Things I Know About Her