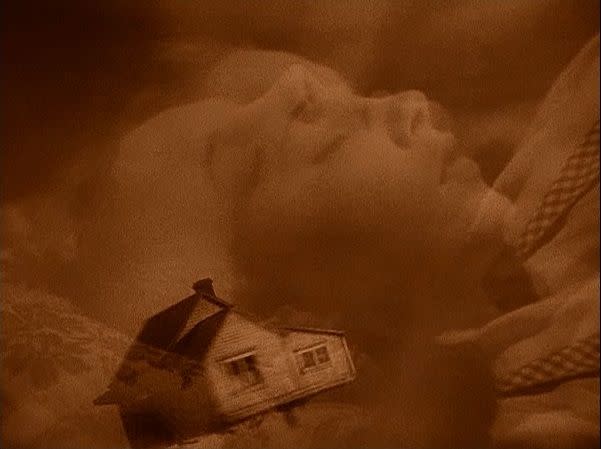 Geoff Pevere on the Sequences in Cinema That Haunt His Dreams

Sigmund Freud goes to the movies

“Dreams are the royal road to the unconscious.” — Sigmund Freud, The Interpretation of Dreams

Geoff Pevere is a critic, author, and the Program Director for the Rendezvous With Madness Film Festival.

I remember having a certain kind of dream as a kid: it was an unconscious interpretation of a movie I'd seen, only this time I'd dream it with yours truly in a lead role. Surely this was what dreams were made of: movies I loved, replayed with me in them. No wonder one of the long-sought goals of entertainment technology has always been total immersion. This is something dreams have done for us, but has only been hinted at in practice. In a sense then, what film has aspired to since the beginning is the condition of a dream.

Dreams predated movies, of course, but it was really with the advent of moving pictures that something like simulated dreams seemed not only possible, but inevitable. Even if you weren't conversant in all the talk circulating about dreams and the unconscious at the beginning of the 20th century, you could understand it on a more primal level. Something about the spectacle of cinema, as rough and flickering as it was, suggested the lives we lived when we were asleep. We all had our own inner movie studio, and it kept to a breathtaking production schedule. Something new was produced every time we closed our eyes and dozed off. 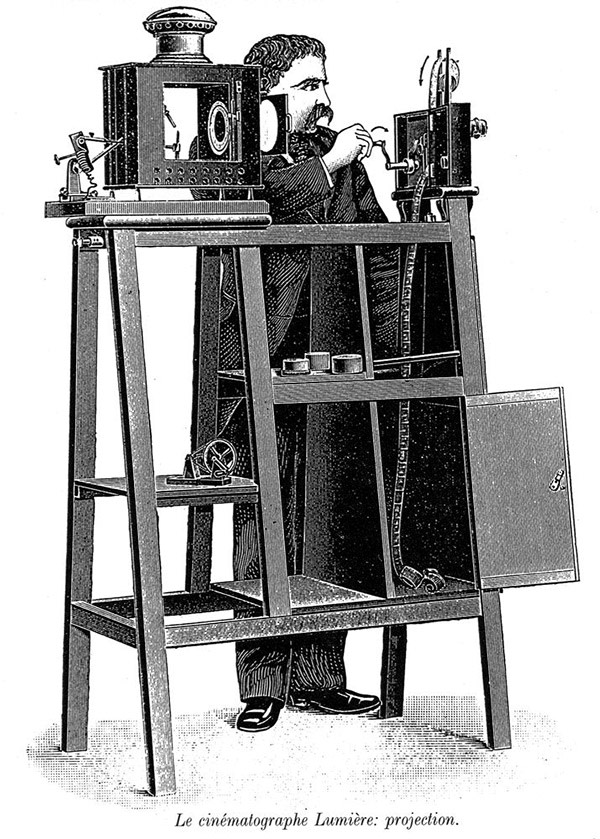 The first public screening of the Lumiére brothers' wondrous new moving-picture machine took place in Paris in March of 1895. This was the same year that a 39-year-old Viennese neurologist named Sigmund Freud published a co-authored book, with Joseph Breuer, called Studies on Hysteria. The two events might have seemed worlds apart at the time, but their historical coincidence now looks like providence: no medium would quite as potently suggest Freud's emerging formulation of the unconscious and its nocturnal operations as the movies. Nowhere would the theory of psychoanalysis be put into more popular practice than in those dark theatres where millions of people would soon sit, experiencing something like dreaming while wide awake.

While Freud tended to disdain movies as beneath his interest — a common belief among the cultured swells of the day — cinema itself had no such pride about Freud. Whether by design or simply unintended resemblance, film became the medium in which Freudian approaches to understanding the mind and its operations went global. Nothing marked the convergence of psychoanalytic practice and the movie-going experience quite as literally and vividly as dream sequences.

Still, the doctor remained unconvinced. He might have seen dreams as the primary gateway into the mind — a theory expanded upon to world-shifting effect with the publication in 1900 of The Interpretation of Dreams — but Freud remained no fan of film. (The only recorded exception being a letter that included admiring comments about the work of Charlie Chaplin, “undoubtedly, a great artist.”) But the train Freud got rolling was now thundering along under its own steam, and movies and dreams were bedfellows linked somewhere in the darkest corners of the mind.

Let us now consider some of the most literal and influential fruits of this union: those particular passages of the movie where dreaming steps out and assumes control of the narrative. Movie dream and fantasy sequences are nearly as old as film itself. Their persistence and prominence as a device for indicating the inner lives of characters — otherwise inaccessible, or only expressed through action or exposition — can be accounted for on two levels. Dream sequences are popular culture's version of Freud's key to the unconscious, and they allow opportunities in otherwise realism-grounded spectacles to go crazy with expressive potential and unchained impulses.

What the best dream sequences do is harness the subliminally suggestive power of film to a character's internal life. They open up a world within the world of the movie — think of Dorothy's passage through the Technicolor portal in The Wizard of Oz — and through that door, we find worlds we'd never have dreamed of. Or, more to the point, only dreamed of.

Here is a selective, alphabetically-arranged list of some of film's most resonant and mind-bending dream sequences. I would encourage you to seek them out and then to do what one always must do in order to fully process and absorb something spectacular: sleep on it.

Carrie (Brian De Palma, 1976): After the high-school carnage perpetrated by the telekinetic Carrie White (Sissy Spacek) at senior prom, one of the key instigators of Carrie's wrath approaches her grave to pay her respects to the life she may have helped ruin. In this dream sequence, Carrie reaches through the unconscious to pull the dreamer into her grave.

The Exorcist (William Friedkin, 1973): In a movie notorious for its jumps, scares, and general audio-visual cacophony, the dream sequence of the troubled priest Father Damian Karras (Jason Miller) is noteworthy for its truly eerie quiet and stillness. Karras, stricken with guilt over his past (and facing his first full-fledged Satanic encounter), sees his dying mother calling to him, but can't reach her. He is not only helpless, but still a frightened boy. As unnerving as anything spit up by the devil himself.

The Fly (David Cronenberg, 1986): In one of two nightmare birthing sequences to appear that same year (the other was in James Cameron's Aliens), a woman (Geena Davis) dreams of the possible consequences of loving a man (Jeff Goldblum) who has fused his genetic material with an insect. The “baby” held aloft under the unforgiving lights of the operating room is something only a David (Lynch, Cronenberg) could love.

The Last Temptation of Christ (Martin Scorsese, 1988): Dying on the cross, Jesus (Willem Dafoe) dreams of an alternate life as a carpenter and father, an un-divine but perfectly content human being. This is how the devil slips in: through the mortal side of a messiah who dreams like the rest of us.

Los Olvidados (Luis Buñuel, 1950): No one relished the down-and-dirty subversive potential of a dream sequence quite like the Spanish-born charter-member Surrealist Luis Buñuel. In this social-realist drama, he creates his most sublimely unnerving nocturnal vision: a boy who has witnessed something awful returns home to his bed, only to find himself plunged into a psycho-sexual whirlpool involving raw meat, laughing corpses, and his seductively floating mother bearing a dead chicken.

The Manchurian Candidate (John Frankenheimer, 1962): Troubled Korean vet Major Bennett Marco (Frank Sinatra) keeps having these crazy dreams. In one sequence, he's among other American soldiers who are guests at a horticultural lecture, presided over by some prim ladies' garden society. Yet the figures keep shifting: the ladies become apparent representatives of all the USA’s most feared political enemies, and one of Marco's fellow floral society guests (Laurence Harvey) starts putting bullets in the heads of fellow Americans. As a vision of paranoia and flopsweat anxiety, Marco's dream is his country's nightmare, condensed into a toxic nocturnal nugget. It’s especially relevant today.

Rosemary's Baby (Roman Polanski, 1968): Already consumed by suspicions that the people living in her recently acquired New York apartment building are up to sincerely unholy shenanigans, Rosemary (Mia Farrow) has a dream about having sex with her husband (John Cassavetes), only to have Rosemary realize that her lover — like everybody else in that spooky joint — may not be who he seems. Yes, it’s the devil yet again, all dressed up as a dream and sneaking his way into the nightmares, and the unconscious, of a movie character.

Spellbound (Alfred Hitchcock, 1945): This dream sequence commissioned by Alfred Hitchcock and designed by Salvador Dali, is like a cartoon version of Dali’s already dream-inspired art: perspective tilts toward infinite vanishing points, solid objects melt into liquid, and the dreamer (Gregory Peck) seems lost in a discombobulating nightmare of forced perspectives. This is one of the coolest and most artfully articulated dream sequences ever attempted. We should all have such bad dreams.

The Stranger on the Third Floor (Boris Ingster, 1940): One of the first films in the decidedly haunted and nocturnal genre known as film noir, this little movie boasts a meticulously mounted, visually striking, and full-on delirious dream sequence: Reporter Mike Ward (John McGuire), wracked with guilt that he might have sent an innocent man to the gas chamber and maybe killed his nosy neighbour, falls into a tortured sleep and imagines his own trial and sentencing. Imagine Kafka and surrealism nailed on a micro-budget. In Ingster’s film, the future of film noir was anticipated by one man's movie nightmare.

Wild Strawberries (Ingmar Bergman, 1957): The night before he’s set to travel to his former university to receive a prestigious award, unkindly old Professor Isak Borg (filmmaker Victor Sjöström) dreams of being on the abandoned streets of a small town, a place where clocks have no hands, people have no faces, and a driverless carriage is just about to come crashing to a halt. The carriage carries a coffin, which spills out onto the cobblestone street. Guess who's in it? Says Bergman, welcome to your nightmare.