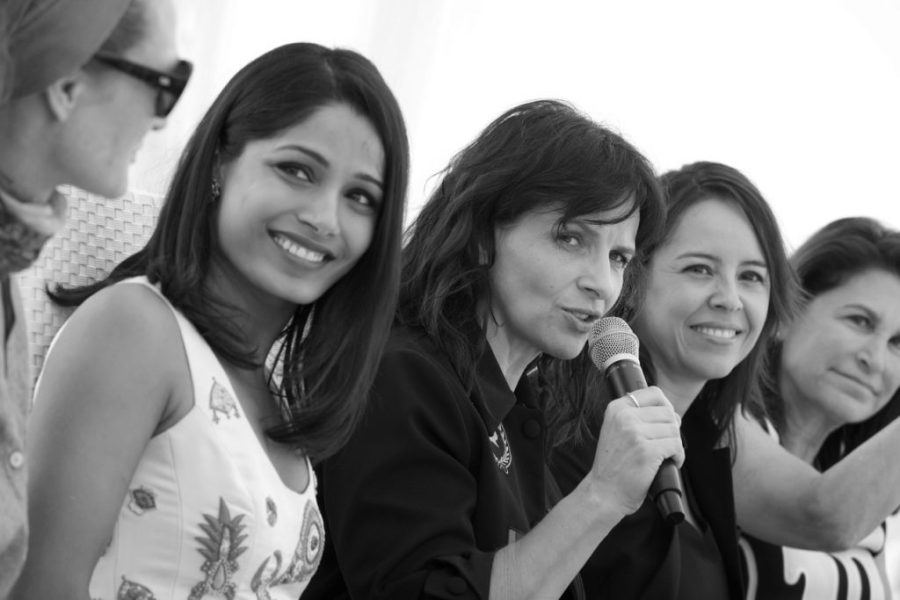 "My enemy’s enemy is a friend."

Growing up in India, my father made sure I watched an equal amount of female-driven films. Back in India, they would call them “the art-house ones” or “the parallel cinema.” Any strong female stories would automatically get segregated and thrown into a different category.

The men that I meet are not afraid of giving women a chance. I mean, Jennifer Lawrence exists. Blue Jasmine happened. There are a few female actors who have done it — Meryl Streep. But what is filmmaking at the end of the day? You want to tell a story, but it's also a business.

Even Amy Pascal, the former head of Sony Pictures, said something like, "If my female actors come to me, and if they're not charging as much as the men — I'll take it." We have a mentality where even female producers end up breeding the same ideas that are not in favour of women.

Now you see Jessica Chastain starting her own film fund, Meryl Streep starting a film fund for writers over the age of 40. Geena Davis is also doing tremendous work. She's part of the advisory board for the first female-driven studio non-profit, a company I am a part of called We Do It Together, which is also supported by actresses and filmmakers like Juliette Binoche, Penelope Cruz, Jodie Foster, Catherine Hardwicke, Marielle Heller, Queen Latifah and Ziyi Zhang. This initiative comes from our personal frustrations about the lack of understanding that this industry has about women. When there are so few female writers and directors, the portrayal of female characters and voices is going to be a little poor. You think about it and you ask, “Why is Catherine Hardwicke not making more films... Why she isn't making more films at the same level as Martin Scorsese?" 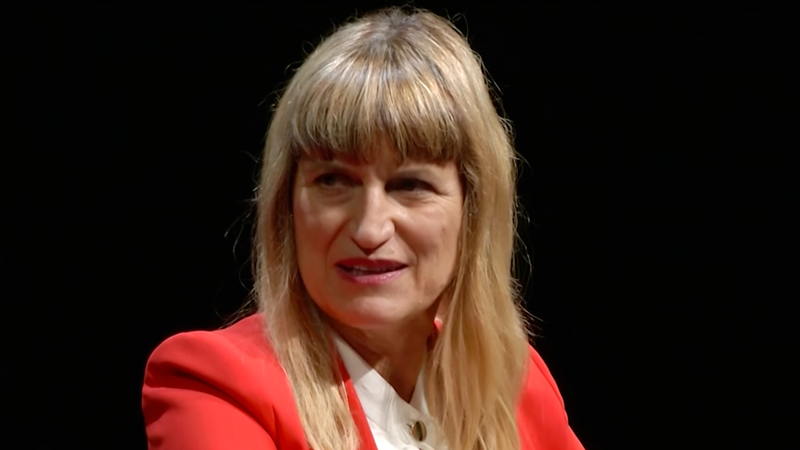 At TIFF '16, I took part in an industry panel alongside Anna Serner of the Swedish Film Institute, Sally Caplan of Screen Australia and Carolle Brabant of Telefilm Canada, titled “Women At The Helm.” During the Q&A, a female audience member asked:

"I'm a young film director and I have a very unconventional style of filming. It's very hard for people to believe in what I'm doing, so how I do I go about this?"

And I thought about what she was saying and I said, "What do you mean ‘unconventional’?”

I said, "As an actor, I just want to tell you — you are just as unconventional as a Michael Winterbottom, or a Terrence Malick, or a David O. Russell. So the difference between you and them is that you're a woman and they're a man. It’s harder for you to get your foot in the door.”

There's not an even playing field at the moment. And at the end of the day, it should all be based on credit and talent. Television has definitely defied that. We've seen a real resurgence of female characters on television. There are so many female writers and directors working in TV, it's getting to be almost 50/50. The film industry needs to take a lesson or two from that.

Growing up and watching Hollywood movies in India, there were not a lot of people who looked like me. It was mostly white actors, or Black actors in some kind of subjugated role. I started off in the industry when Slumdog happened in 2008 — there was no one’s career to emulate! I remember feeling a bit lost. And that’s an interesting place to be in. First of all, there's no formula. Someone else can't come and try to do what I did, and I can't try to do what someone else did. So I remember thinking, “Where am I really going with this? And what am I going to let my next film be?”

There hasn't been a long-term, longstanding, proven formula that female-driven films also garner a lot of money. So I think the way to quell the industry’s fear, instead of demonizing them, is to do it on our own, show it to them and have them join the bandwagon when they're ready.

My strategy is not to go on to too many panels. My strategy is to just do it, and to let people see my films and let them shut up. There's no point in playing the blame game. Yes, there is an inner anger sometimes and a frustration. But to channel that into making better films is the smarter way to go. 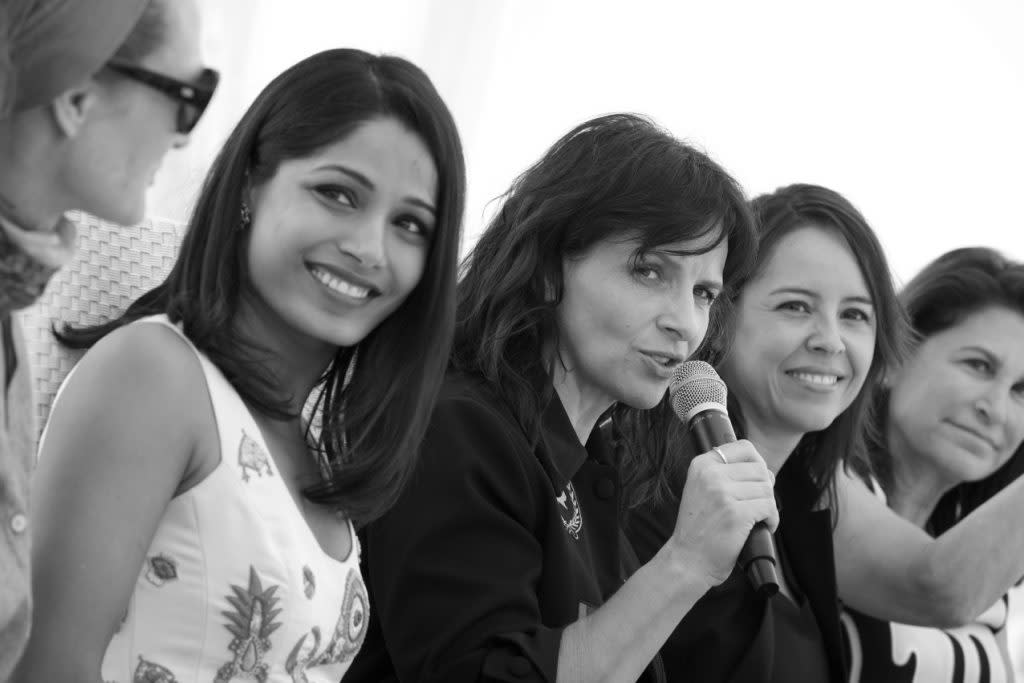 The origin of my production company came from my experience of trying to produce a film that I have been working on since 2011. My director, Kátia Lund, has been working on it for even longer. It's this incredible, inspirational story about this woman from South Asia who doesn't speak a lick of English.

Every time we took it to the studios, or the big production houses... people were totally impressed by her story and absolutely riveted by how inspirational she is. But when it came down to actually putting their money where their mouth is, it was very hard for them to do that. I think the thing that overrode all of them was mindset. There's a very deep-rooted presumption about a woman's creative abilities, her stamina, her artistic tendencies. And her ambitions as well. This struck me as something that needed to be changed.

We needed to take matters into our own hands. We spoke to Chiara Tilesi, who is the founder of the We Do It Together film fund. In the same week, she ended up meeting another producer and another filmmaker who said the exact same things to her. And she said, "Oh my god, this is like an ongoing trend." She came back to us with a non-profit model for film financing where all the money could be invested back into the project. Investors got a tax writeoff and the proceeds were donated to the organization of their choice. Now in our case, the organization of choice is ourselves. So what we want to do is have a self-sustaining model where all proceeds are invested back into the company to create the next cycle of female-driven films. 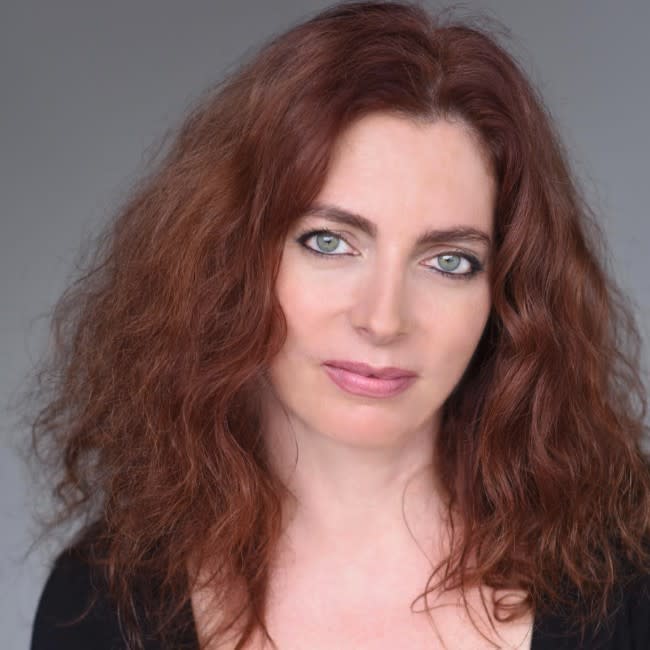 For any movement to actually take place, you have to start somewhere. We’re looking at funding from government grants, corporate funding… anywhere from branding to some rich billionaire who just goes, "I love film, I want to give you this much money. And I support your cause because if you want to change the social paradigm, go change the cultural paradigm first."

Chiara says it very brilliantly: “If people are looking at women in film in an overly sexualized way, in everyday life, they're looking at women in an overly sexualized way." Just because we’re a non-profit, we don't want you to think that these are dreary, drab, sad, rape and poverty and injustice-driven films. Yes, that very much exists in our society. But we want to make good comedies, we want to make good small-budget action films. We basically want to try to do what every man in the film industry has been given many chances to accomplish. We want to be the first non-profit film studio for women-driven films.

There are so many incredible female filmmakers out there. The director that I’m working with is Kátia Lund, she's the co-director of City of God, which everybody knows is one of the most brilliant films ever. At TIFF '16, I watched Amma Asante's A United Kingdom — what a brilliant film. Kathryn Bigelow's The Hurt Locker was fantastic. I watched Jodie Foster's Money Monster and I know that the film didn't do necessarily as well as people expected, but I thought it was very entertaining.

For men and women to fail or succeed, there needs to be an even playing field. Men fail, no problem. But when women fail, that's the end of the world. You have lost your chance! We have very few female directors but to keep them encouraged, we need to let them fail or succeed as per the common standards that men are judged on as well.

If you give a female director a story that she really believes in and the tools to go out and make it the way she wants to, just watch what happens. Amma Asante, Ana Lily Amirpour and Andrea Arnold were all at the Toronto International Film Festival this year with new, great films. There are more voices out there, so it's just about giving more than seven per cent of them a chance.

Feminism for me is equality. And when I say equality, I don't mean men and women have to be equal without merit. Be equal with merit. I don't want to be given a job or an award because of the colour of my skin. I don't want to ever be nominated because, "Oh, in that category, let's throw in the token Indian girl." I put my heart and soul in my film projects and I would never want to feel like I didn’t earn it. 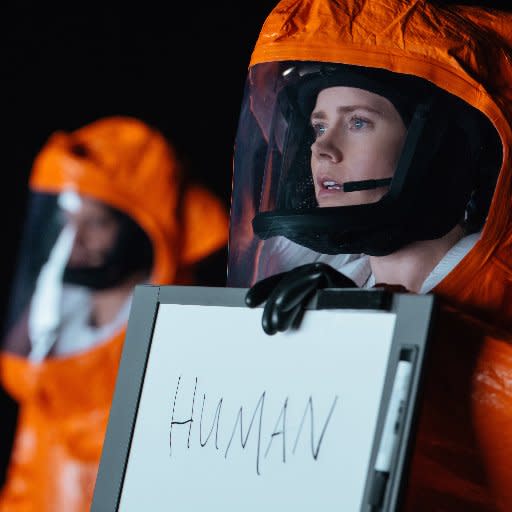 At TIFF '16, Arrival just blew my mind. It’s one of those films that uses a big-budget idea to tell a very grandiose story. It's a sci-fi film but with this beautiful message that’s saying something so real and so human about unification and solving problems together, no matter what race, culture or country you belong to. The only way for us to get that message would have to be through a third party, and it can't be a human. Watching the movie, I felt like it was true. Someone is going to come and tell us, "we need to get our act together."

At the end of the day, it's all about communication. There’s reason why we use words like "Mother Earth." I love the concept of how Amy Adams' character did not even know she had the power. The woman's perspective was bound to be a little different. But ultimately, they worked together, which is how they arrived at a conclusion.

That’s what I think we need to do with men and women in the film industry as well.

A Conversation Between Anne Émond And Chloé Robichaud