Eat Your Heart Out

The Quest for Virtue in Julia Ducournau’s Raw

I can recall several distinct occasions in which I’ve called myself a monster out loud. One time, it was after I said that an acquaintance’s baby was ugly (like, truly the ugliest) and another time after I ate all the chips (like, truly all of them). In those instances, monstrosity can be a joke. We can make our darker sides a little lighter and drop an Arrested Development reference at the same time. If you’ve never needed this kind of mechanism to make it through the day, I don’t know what to tell you.

The serious monstrosities are the quiet ones, the ones that can’t be translated into a cultural allusion or a quirky anecdote. I’ve also called myself a monster internally, but I’m not about to begin an article detailing the situations, thoughts, or actions that preceded those judgements. These are the transgressions we know would overthrow how others see us, as they almost immediately change how we see ourselves. Our monstrosities, like monsters, live in the dark and wait to surprise us.

The horror in this is the realization that we may never really know ourselves, and that we may fall alarmingly short in embodying the values that we seek and admire in others. A natural impulse might be to feel shame or disgust, but French director and writer Julia Ducournau suggests another alternative — to fight back against the monster. In her feature-length film debut Raw (which premiered at TIFF 16 in the Midnight Madness programme), Ducournau shows incredible empathy for her main character. She’s a shy 16-year-old girl named Justine (Garance Marillier) who confronts the biggest monstrosity imaginable in her first year of boarding school. 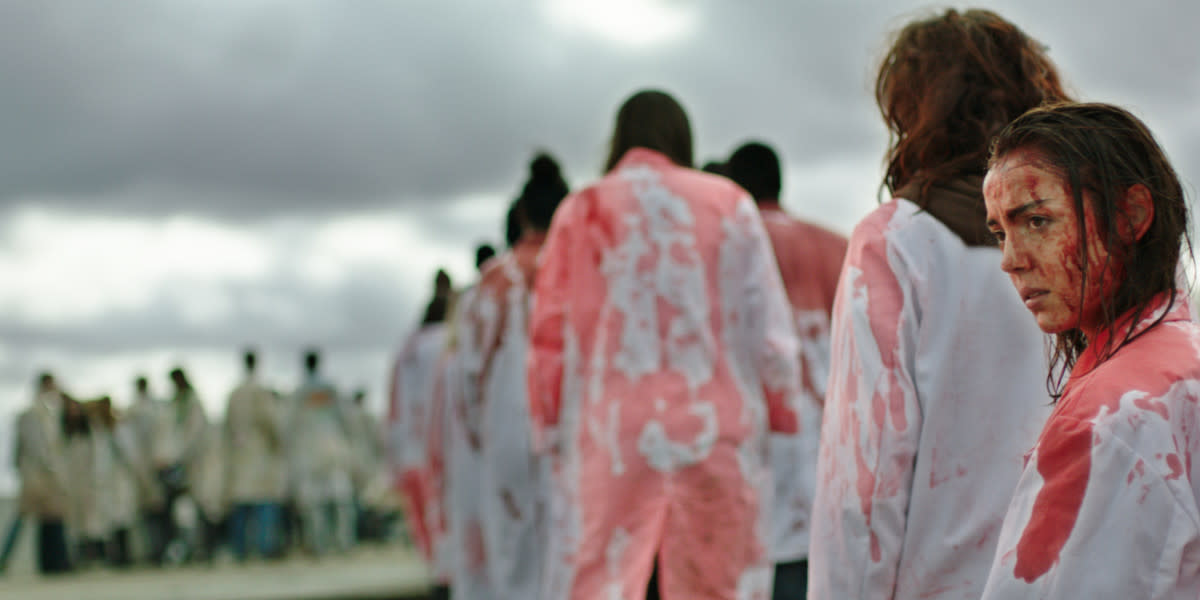 “I wanted to subvert the audience’s morals. I wanted them to feel empathetic for someone who, in the middle of the movie, was going to commit an act that is seen as inhuman,” Ducournau says over Skype from France.

“I thought about what the main taboos in humanity are that everyone would reject instantly. My first thought was murder, but 90 per cent of the movies made today are about murders. Incest was too much, I can’t deal with that,” she says. “Cannibalism made sense.”

A lifelong vegetarian at the order of her parents, Justine arrives at a prestigious veterinary school under a fury of hazing from the older students. This includes a tradition of forcing the “rookies” to eat raw, rabbit kidneys. Her first ingestion of meat sets off an unrelenting change in Justine’s cravings, which get increasingly bloody, raw and human. Her entire demeanor evolves and rebels against her former quiet, good-girl ways. Bags darken under her eyes, her focus in class slips, her emotions burst, she gets blackout drunk at the school’s underground student parties, and she wants sex. In almost all capacities, she embraces her dark side, and Ducournau’s visceral, cringe-inducing shooting style (not to mention the gory effects by Olivier Afonso, known for his work on Alexandre Bustillo and Julien Maury’s ghastly L’interieur) forces the audience to embrace it, too.

And yet, Justine always maintains her innocence. While she enjoys the freedom of her rebellion, she constantly struggles with the immorality of her nutritional impulses. In Raw, Ducournau sends Justine on a solo journey to understand, control and overcome her “disease,” as Ducournau puts it.

Often in the horror genre, a monstrous coming-of-age occurs in teenage girls in tandem with their period — think Brian De Palma’s Carrie (1976) or John Fawcett’s Ginger Snaps (2000). In Raw, an excess of blood is still the problem, but it’s being consumed instead of secreted. Immediately, Ducournau makes Justine’s situation uniquely monstrous — her transformation is not brought upon by a natural biological event, but by an independent action Justine takes, in defiance of her parents. It’s a moment not without its own mix of genuine teenage fear, confusion, shame and embarrassment. It’s the influence of another character that gives her the final push — Justine’s beautiful, popular, unquestionably cool sister Alexia (Ella Rumpf), who is a year above in vet school. Sadly, she’s also one of Justine’s main bullies.

As the complicated relationship between Justine and Alexia comes into focus, the film grows from a horrific coming-of-age tale into a larger theoretical exploration of family lineage and self-determinism.

“My vision for the movie is that we can escape this determinism and that we should never be determined by anything—family, society, what we think we are,” says Ducournau. Raw is full of contradictions and dueling impulses: pleasure and disgust, rebellion and obedience, order and chaos. In Alexia, Justine has both her biggest ally and her fiercest rival. She has a window into what she essentially is, and what she refuses to become. Ducournau translates both light and dark elements of their relationship through her blunt, bare visual language that revolves around the body, which she says is inspired by David Cronenberg.

By the end of the ordeal, the two sisters have left permanent marks upon each other’s bodies, but only Justine makes it out with an unblemished soul. Ducournau says that she believes in metamorphosis, and her previous work — the 2011 short film Junior and the 2012 TV movie Mange, both also featuring Marillier — deals with a physical transformation that coincides with the emotional change of adolescence. “Raw” can refer to Justine’s preferred meal, or her emotional state. But the film’s original French title, Grave, means something much more severe than the temporary state of youth.

“‘Grave’ and ‘gravity’ is about the human condition. It’s way more than one teenager, it’s about how we’re all stuck on this planet and we’re being pushed down on it. It means that this is mortality, this is the human condition,” she says.

As we empathize with Justine’s gruesome transformation, the audience is constantly confronted with how thin the line is between us and this cannibal teen. It’s most palpable in Justine’s point-of-no-return, a late-night snack on a finger. Her simultaneous obsession and repulsion with her digital nosh mirrors our own. Man, does that ever look like a chicken wing.

“When you bite yourself, just to see what it feels like, you can feel it in your teeth and you know when you’ve gone too far. I think it’s a universal reaction,” she says.

The location of a veterinary school is no accident — the film levels humans and animals onto the same plane. Rookies are herded like cattle through the school, Alexia becomes one with a horse during a rectal exam, Justine and her classmates discuss the morality of human/monkey rape.

“When you talk about a cannibal, someone who’s in prison, and people say ‘He’s an animal’ or ‘she’s a monster’… I believe we all have an animal part in us. And I think the acknowledgment of this animal part is what makes us not animals, it’s what makes us human. We can reflect on this, and we can make choices,” Ducournau says.

Humans can make choices that go against our darker urges, for the good of each other. Justine can fight against her inner monster. I can be nicer to babies.