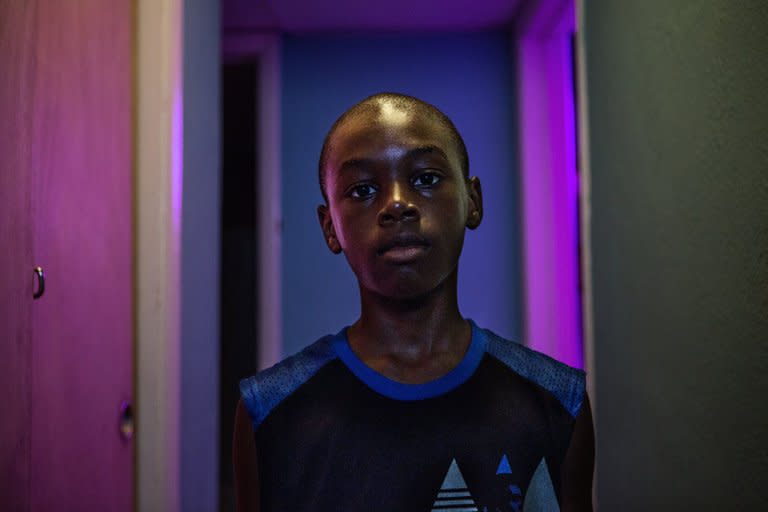 Barry Jenkins’ Moonlight is about the intersection of Blackness, masculinity, and intimacy, but above all else, it's about queer Black men navigating other Black men, those who bear the most and least semblance to themselves. It's a movie for Black men who have experienced alienation as loss. Less coming-of-age and more coming-into-being, the film complicates insufficient narratives of Black manhood that rely on whiteness, or valourize trauma as triumph. At stake is more than the tired matter of representation; it's a rare opportunity to forego white palatability and address Black men about their experiences and feelings, their capacity to harm and to become.

Through windshields and fences, from behind corners and the back seat of Juan's car, the camera captures social distance instead of acting as a surrogate for the white gaze. The audience rarely trespasses beyond the social and interpersonal boundaries felt by the characters, preventing them from indulging in the medium’s common technique of voyeurism. Maintaining this distance — equally as important, I think, as the camera’s closeness and intimacy — allows Moonlight to resist fetishization, in particular for spectacles of violence and Black male physicality seen throughout film history.

In one surreal sequence, Little (the child version of the protagonist, played by Alex Hibbert, later in seen in adolescence as Chiron, played by Ashton Sanders, and finally as the adult Black, played by Trevante Rhodes) stands in the hallway to his mother's room. She glares opposite him as a lurid, neon glow emanates from the open door of her unseen bedroom, a private red-light district. As Paula screams, we hear nothing. Her reality exists beyond that portal in an impossible place, just as she impossibly exists in Little's world. She bears a secret to her child's suffering from which she’s unable to offer reprieve, a secret he only looks too young to keep. That same silence tears them apart and makes them alien to another.

Moonlight addresses the contradictory position of being a Black man alienated by your own Blackness. The protagonist experiences this from all sides — from his mother, from his chosen father, and from other young Black men. It's one thing for the word "family" to lose its meaning, it's another to feel arbitrarily and unjustly disconnected from your cultural heritage or worse, to be blamed and punished for it. Indeed, soon after Boris Gardiner declares that "every nigger is a star" in the film’s opening theme music, Little is pursued by boys yelling "Beat his faggot ass!" This leads to an encounter with an older drug dealer, Juan (Mahershala Ali), who gently, patiently gets closer to the guarded, silent child. Little didn't inherit the dignity of his Black masculinity, his birthright. As a child and later as a teenager, he’s unable to find commonality amongst his peers for nonsensical reasons: he’s too soft, his jeans are too tight, he’s not one of us. What feels like failure and loss is the result of finding hostility instead of commonality among your kind when you're not hard enough, not Black enough. For those that've experienced that pain, it's devastating to see it happen to someone else.

We expect families to equip us with the agency — and, to a lesser extent, the intellectual and material resources — necessary to realize what we want and who we want to be. In Moonlight, blood relations are mere technicalities. As in real life, they don’t presume a responsibility of care. When our bloodlines fail us, we have to choose our families, which Black people have a long history of doing to create our own support networks and mobilize collective power. While Little's relationship to his mother ultimately hinders his potential to grow into an adult, Juan and Theresa (Juan’s understanding wife, played by Janelle Monáe) open up the possibility of different ways of being. When Little asks them what a faggot is around the dinner table — a place where homophobia traditionally announces itself — they offer a careful, compassionate explanation that permits a life beyond exile, one where a gay person could live without constant persecution. While Theresa could reasonably be expected to be more forgiving, Juan is a moving image of Black fatherhood that is rarely seen in film; unconcerned with the traditional responsibilities of being a father: paternalism, punishment, raising a "man.”

Fortunately, Moonlight isn't about the necessity of Black fatherhood, nor does it sanctify it as a panacea to suffering. In one poignant scene, Juan takes Little to the ocean, guiding him out to the water patiently as the camera hovers at the surface of the water. Using the ocean as a breaking point, the image is split into two. The sense of safety implicit in the top half of the image — a father teaching his son to float — is contrasted against the unseen dangers of the water below, mirroring the Little’s difficulty being vulnerable with other people, even while being constantly reassured. In the immediacy of the moment, we’re reminded that safety can never be guaranteed, that bodies are as fragile as trust.

In the film’s most uplifting moment, Little manages to untense his body enough to float unaccompanied, to the sound of Juan's joyous laughter. In that moment, I was consumed by grief. My father tried to teach me to float in much the same way but I could never get it right, perhaps because I was never fully able to let my guard down around him. I mourned this missed opportunity that had the potential to bring my father closer than arm's length. I should’ve known that he wouldn't let me go. His touch didn't need to be explained because it explained itself.

As in real life, every conversation in Moonlight begins with a pause. Appearing as anything other than strictly heterosexual risks being ostracized or persecuted by your peers. The culture of self-policing necessitates the impulse for queer people of colour to constantly evaluate danger and preempt the worst possible outcome. As I watched the film, I instinctively braced myself for violence in these moments, which only revealed my own racialized fears that I projected onto the image. In the opening sequence, Juan surveys the block in a sweeping 360-degree shot that looks to preempt threats as both a drug dealer and a Black man. Similarly, Chiron shows the same trepidation when talking to his mother, unsure if she will be compassionate or cruel. These hesitations, loaded with the expectation of retaliation, are never realized in Moonlight. Jenkins’ film instead interrogates an audience’s perception of familiar Black film tropes like drug dealers, crack-addicted women, and young Black men.

In a cinema of hesitations, we encounter the barriers erected between individuals that indicate the social anxieties of marginalized people. For Black men, intimacy depends on your ability to perform straight Black masculinity and not in your capacity to be vulnerable, open, and compassionate with your own kind. When these hesitations carry the potential and expectation of violence, it becomes clear that the greatest barrier to intimacy is the capacity to harm. It keeps Chiron from being close to his erratic mother and ultimately undoes him when Kevin turns against him in the schoolyard to preserve his manhood. Still, Moonlight gives us moments in which safety is an option, ironically in the most dangerous of places: the ocean, the car, and in the home, a site where violence is common.

In the final sequence, Kevin (now played by André Holland) reminisces about how his life turned out since he last saw Chiron, now the hardened Black, remarking: "Never got to do anything I wanted to do. It was all I could do to do what folks wanted me to do." He’s disappointed but nonetheless satisfied with his life, despite conforming to other people’s expectations. In contrast, Black (the oldest version of our protagonist) has formed a new self through sheer willpower. He arms himself with the trappings of Black manhood — the gold fronts, the rippling muscles, the stoicness, the street paternalism, the spitting image of Juan's car (complete with a gold crown on the dashboard) — yet still seems incomplete. Neither character was afforded the chance to reconcile their desires with their identities, which is why the ending of the film is so crucial.

Blackness, in cinema, has always been primarily associated with a sense of loss. Moonlight’s final scene fulfills both character’s deep-seated desires to recreate intimacies that could have or should have existed. The last image sees Black resting his head on Kevin's shoulder, next to the orange haze of a street lamp. Drawing a visual parallel to the lurid light of his mother’s room, finally Little/Chiron/Black’s burdens of the past (and its implications on his future) do not bear on a moment of closeness. Out in moonlight on the ocean, there’s a sea breeze grinding time to a halt. In that instant, Black men are the subjects of a perfect image, one in which their subjecthoods achieve mutual recognition. The characters do exactly what they want to do, being close, touching each other without explanation. The only purpose showing them having sex would serve would be to gratify the voyeurism of the audience. And as a film primarily about Black lives, satisfying the viewer should be of minimal importance.

For Black audiences, such a tender, compassionate image of subjectivity is as beautiful as it is fragile. In previous writing about the film, writers have honed in on Moonlight’s “honesty” while failing to acknowledge the constructed nature of the medium itself. Asking whether the film’s depiction of intimacy is more “real” or performative ignores its greater project of bringing Black intimacy to the forefront, something that some audiences may find they may fail to afford to Black people. If audiences don’t expect or can’t see Black subjects as humans, why should they see us at our most transcendent? The lack of white gaze in the film suggests to me that there is something to be protected here, that the capacity to be intimate is one that is constantly under threat, either through self-policing or normative expectation. Black intimacy is as political as it is private; the discourse between our bodies is not only private but crucial to the way we protect ourselves.

Certainly, Moonlight is a stunning masterwork, the likes of which we haven't seen and probably won't see for some time, but it's only the beginning. For Black men, the real work lies in defusing our capacities for harm and learning to see each other as compassionate, even romantic beings. The final image — one of a pure, vulnerable and fragile tenderness — feels like a relief, a reminder that Black existence is not defined by being denied our humanity.