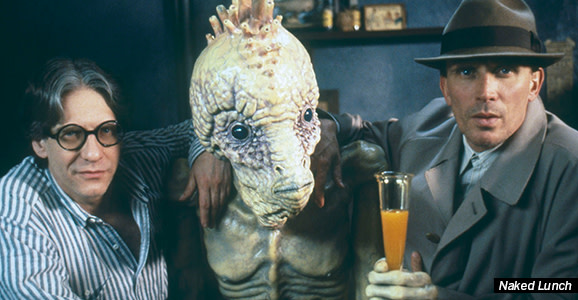 As part of The Cronenberg Project, a major initiative at TIFF Bell Lightbox, post-secondary students and faculty were invited to a panel discussion featuring director David Cronenberg and two of his longtime collaborators, producer Jeremy Thomas and makeup and special effects designer Stephan Dupuis. Having worked together on three groundbreaking films spanning a twenty-year period, the panelists explored the process of collaboration, using Naked Lunch (1991), Crash (1996), and A Dangerous Method (2011) as case studies.

From the importance of pre-production planning to the difficulties of raising funds, each stage of film production was described in detail through the lens of collaboration. Other topics included the merits and pitfalls of relying on storyboards, the process of casting during a film’s financing period, and the creation of key objects included in the TIFF Bell Lightbox exhibition David Cronenberg: Evolution, including the telepod from The Fly (1986) and the mugwump from Naked Lunch (1991). This Higher Learning event was held on November 1, 2013 at TIFF Bell Lightbox and was hosted by TIFF Bell Lightbox Artistic Director Noah Cowan.