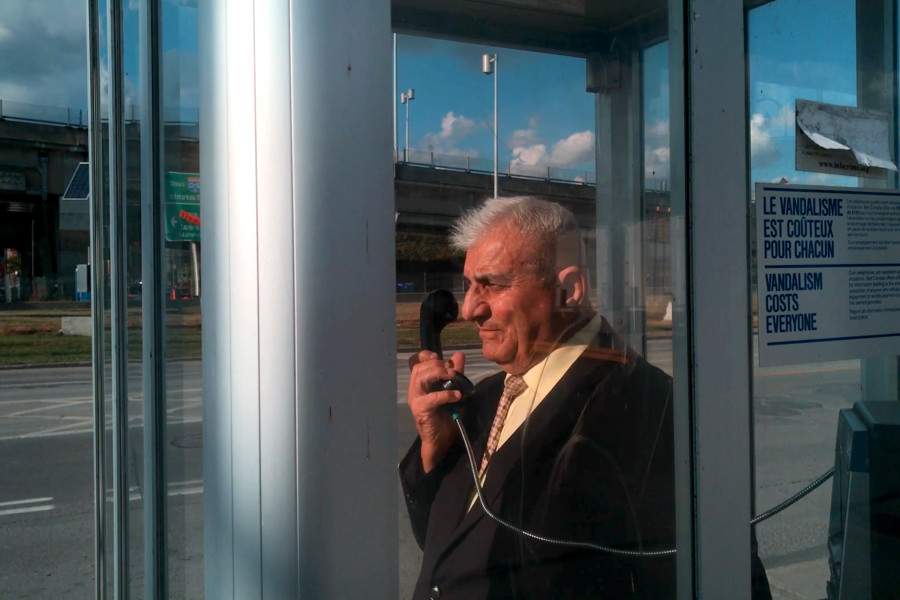 Brian M. Cassidy and Melanie Shatzky introduce our screening of Interchange on Thursday, October 11 as part of the ongoing series MDFF Selects: Presented by Cinema Scope and TIFF.

The films of Brian M. Cassidy and Melanie Shatzky find life and persistence — if not as often bankable hope or conventional beauty — within dismal surroundings. From veterinary hospitals to homes for the aged and disabled, from the rants of a homophobic preacher in post-Katrina Louisiana to a once-sleek shopping mall’s last gasp as an indoor flea market, these are late-capitalist North American wastelands in which few would linger by choice. But in offering us immersive views of these depressing environs, Cassidy and Shatzky not only take us outside our comfort zone, but help us understand the friction between our isolated/isolating daily landscapes and our mental health in a way rarely articulated outside academic journals, let alone addressed on film. A pity — as often happens when confronting discomfort head on, the results generated by their singular body of work are always engaging, and frequently revelatory. 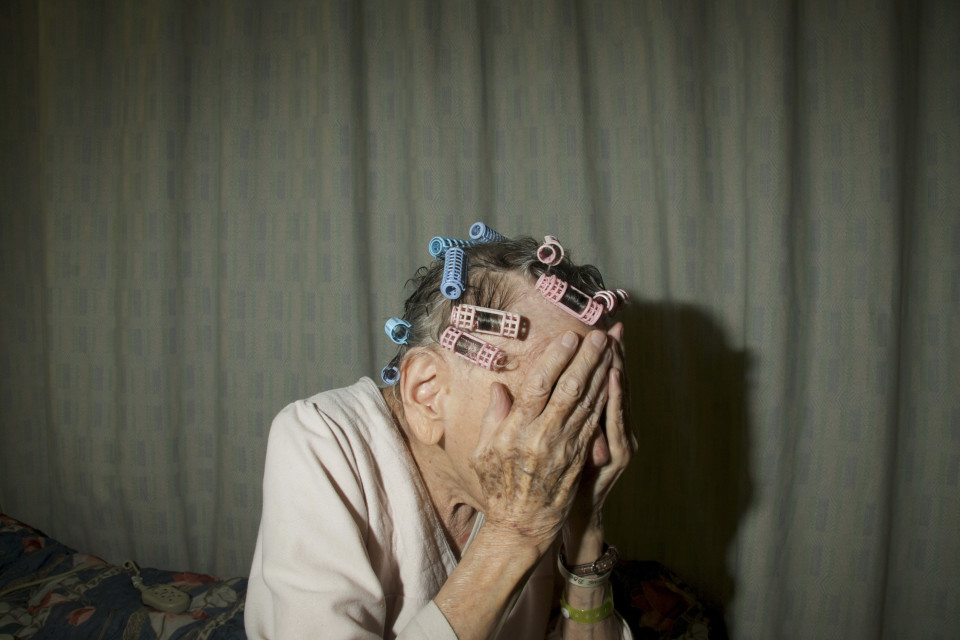 Cassidy and Shatzky first appeared on my radar with the bleak but grimly hilarious feature documentary The Patron Saints, a standout at TIFF 2011, which was quickly followed by their starkly impressive, Melissa Leo-starring narrative feature debut Francine, both of which I programmed at the Maryland Film Festival 2012. In researching this piece, however, I was surprised to see that I’d also caught an earlier feature doc, Fish Kill Flea (2007), which Cassidy co-directed with Aaron Hillis and Jennifer Loeber. Dusty, direct, and unflinching, Flea has stuck with me for a dozen years (even if I hadn’t properly filed away its creative credits in the metadata).

Similarly raw, the 2007 short God Provides — the earliest work credited to both Cassidy and Shatzky that I’ve seen — strikes a different tone than most post-Katrina docs, stretching viewers’ empathy to its breaking point. Amidst (sadly now all-too-familiar) wreckage, a young woman laments the devastation’s disruption of her social calendar while putting her trust in President Bush to make things right, and a bigoted preacher smacks his lips with lusty satisfaction that God’s moral outrage has lashed out against sinful New Orleans and its gay-pride parades. 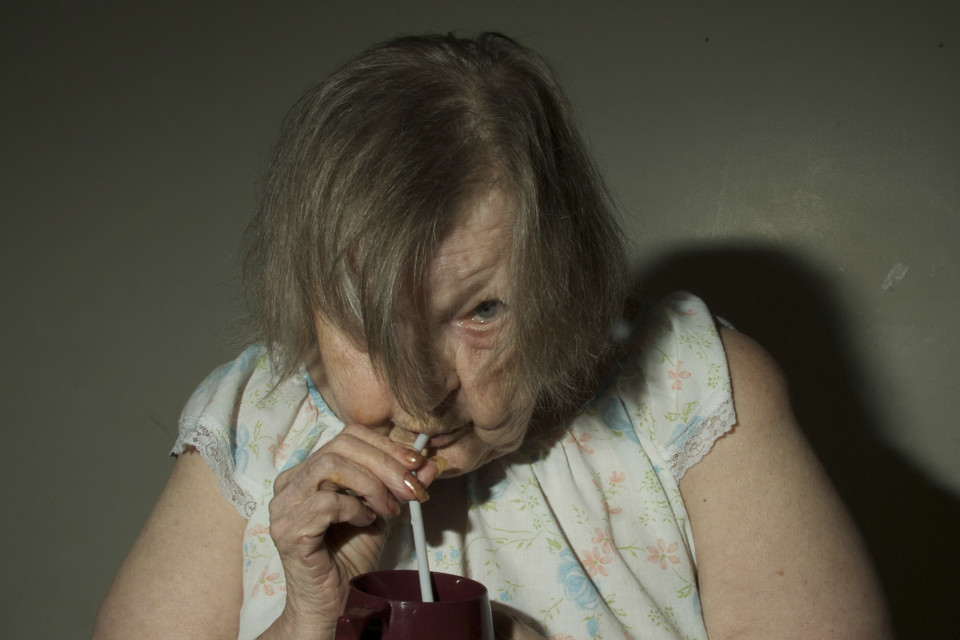 The Patron Saints remains one of the pivotal documentaries of the 2000s in my personal canon, suggesting the best Frederick Wiseman documentary that Wiseman didn’t make. Honouring the tone and concerns of Wiseman’s early-’70s work (as well as the far more bladder-friendly running times that Wiseman has long since left behind), Saints offers us a portrait of an institution — in this case, a home for the aged and disabled — not critiquing so much as observing its push and pull between well-intentioned but inadequately resourced functionality being chipped away towards perhaps inevitable entropy, and amplifying the most idiosyncratic characters and moments encountered. As many of the residents here are in states of mental confusion, we try to steel ourselves to the unnerving mixture of humour and horror that is a human mind in decline: residents hung up on conspiracy theories and other odd obsessions, monologues of verbal babble delivered with a musicality both inspired and inane, mental reversions to childlike states, and heartbreaking reflections on years passing by without a visitor — or, in some cases, no clear sense of just how many years have been spent in these depressing environs.

This is not Titicut Follies: we do not encounter systemic abuse of the residents, and the home’s employees strike us as generally compassionate, if understandably weary. But it’s a film of comparable power, not only due to its unflinching cinematic eye, but also precisely because what we’re seeing is neither an outlying outrage nor an archaic monstrosity society has shed. No: it’s a fate that awaits many of us, assuming we’re lucky enough to reach old age in this society that hides away its elders in the most culturally sterile, banal, and isolated of constructed surroundings. 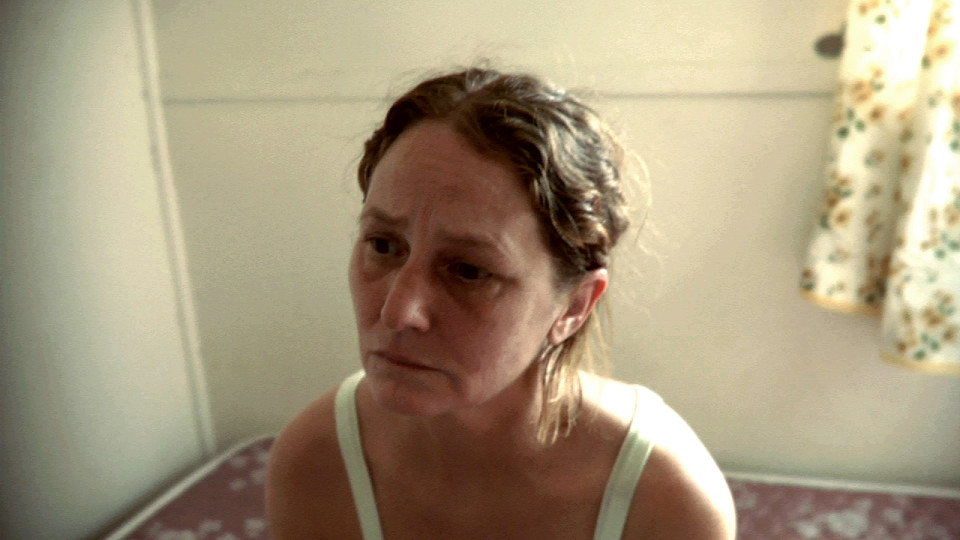 Francine, featuring a bravura, downbeat-and-damaged performance from Melissa Leo, is not only a worthy successor to The Patron Saints, but a compelling demonstration that Cassidy and Shatzky can explore their concerns in narrative form as rewardingly as with docs. Basically a one-woman show, the film follows Leo as the eponymous, world-weary ex-con, uneasily navigating her release back into society in a small Hudson Valley town scarred by addiction and economic decline. Relating to animals more easily than people, she takes jobs in a pet store and veterinary clinic, but her increasingly erratic behaviour calls into question her ability to interact healthily with any living thing. 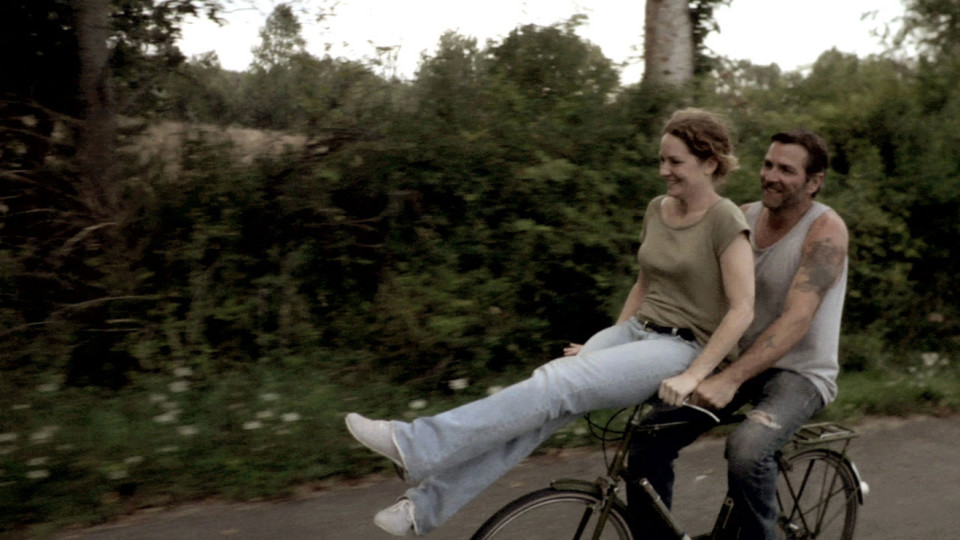 Of course, there’s a political critique embedded here: Francine has not just been failed, but intentionally chewed up and spit out by capitalism and a prison industry that no longer even pays lip service to facilitating rehabilitation or redemption. However, Cassidy and Shatzky eschew even the slightest hint of poverty porn or polemic. As with Ashley McKenzie’s Werewolf and the films of Kelly Reichardt, amidst the specificity of Francine’s very intimate portraiture we get a holistic and sensory-rich view of her environment; we trust and feel that these are communities and terrain that the filmmakers have lived and breathed rather than passed through as tourists or exploiters. 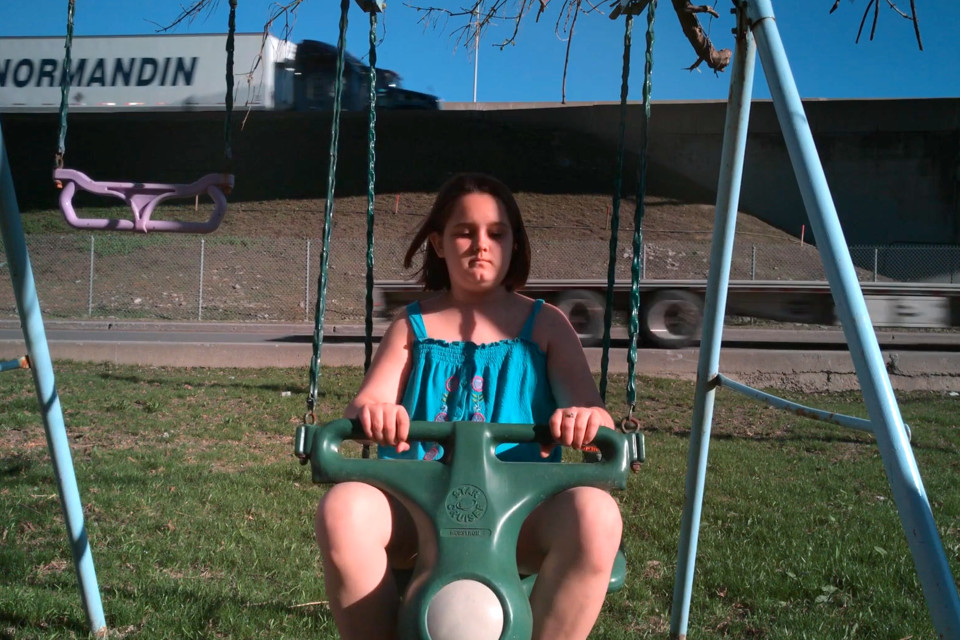 Interchange, the team’s most experimental feature and first in six years, is also their most meditative and experiential, channelling their impressive bodies of work in their parallel careers as still photographers. With extended, fixed-camera shots reminiscent of Tsai Ming-liang’s Stray Dogs, Cassidy and Shatzky turn their attention to the area surrounding the exit ramps and cloverleafs of a Montreal highway. Seemingly on the outskirts of the metropolis, it’s a zone all too familiar in a world brought to the brink of collapse by car culture: layers of rural life, small town, the industrial revolution, urban sprawl, and population drain to the suburbs collide and intermingle uneasily, embedding us in an area that wasn’t so much planned as it was something that just happened. From the striking first shot of this near-wordless film — a glum-looking child listlessly swaying back and forth on a swing located on a drab patch of green mere feet from the highway — people spring up in unlikely places like weeds in cement cracks, little remnants of Jane Jacobs street culture in a geography that’s weathered too many assaults from Robert Moses.

Few films give us such an unfiltered look at how today’s North American landscape truly looks and feels for most workers with a highway-based car commute (which is to say, most workers). This terrain is worse than ugly: it’s banal, depressing, and above all interchangeable. (Pun not intended, but noticed and retained during the edit.) It is all these things, in a way that is internalized and harmful. These asphalt gashes punctuated by construction crews, rest stops, abandoned vehicles, piss-filled bottles, massage parlours, animal corpses, and Tim Hortons dull our souls and pollute our environment on a daily basis. Sound underscores this visual information effectively: with each cut, we experience not only a new fixed point of cinematographic orientation, but also a dissonant shift in aural landscape, attuning us to the block-by-block differential in noise pollution within such a cluttered and chaotic ecosystem.

While the vehicles that pass are usually at such a distance within the frame as to be industrial beasts dissociated from their human passengers, viewers are also given the temporal space to drift along with them if we wish, a jarring reminder that each car and truck represents a journey — probably a solitary and unwanted one, necessitated by work and monotonously repeated twice daily. When we do get a close look at a human being, it’s almost always in close-up and outside a vehicle, even as they dwell within a space defined by wheels and exhaust: a child, seemingly unaccompanied and outside well after dark, fiddles with his mouth, nose, and ears in front of a laundromat; the head of a fast-food employee protrudes from a service window; an old man in a baseball cap smokes a cigarette while using a pay phone. The filmmakers seem to draw a line between those who drive past this area and those who must live and work here, while making it clear that it has a spectrum of impact on us all. 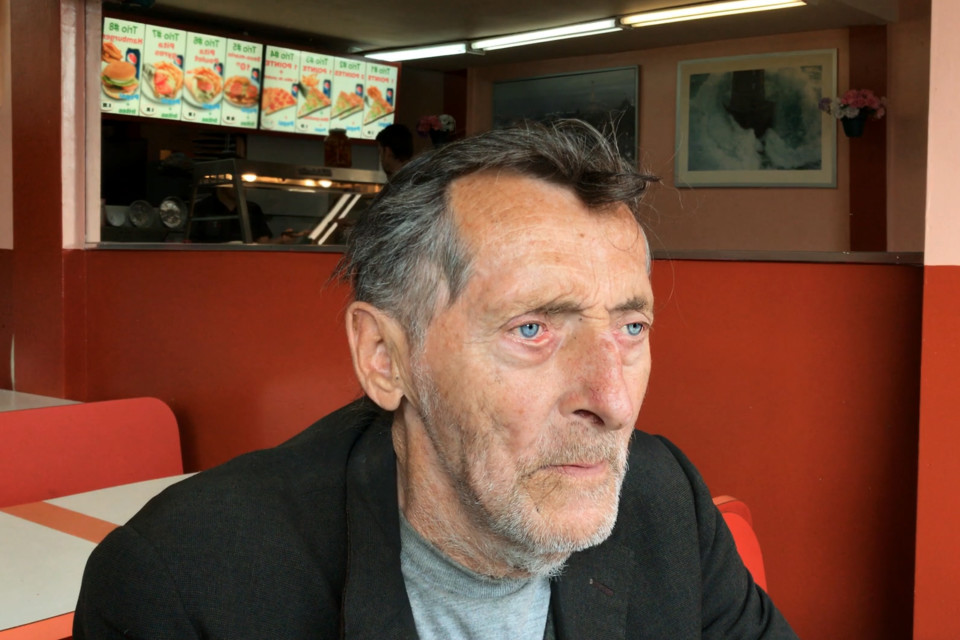 For those conversant with contemporary creative non-fiction forms but unfamiliar with Cassidy and Shatzky’s earlier work, Interchange unfolds as though J.G. Ballard’s Concrete Island had morphed into an experiential documentary by the Sensory Ethnography Lab (which is to say, an extremely rewarding and unique viewing experience). For those who have encountered these previous works — and perhaps even those who haven’t, but have had their imagination fired by these films’ characterizations above — Interchange’s rewards are exponential.

Interchange offers a sustained vision that looks head on at the concrete islands created by capitalism and car culture — and the people marooned upon them — a topography so omnipresent in our lives but rarely forefronted in film or art. Over the course of an hour, Cassidy and Shatzky distill so many of the concerns explored in their earlier films into one experience: dismal geographies, economic depression, dysfunctional systems, the omnipresence of bad architecture, and the physical and mental scars such landscapes create in human beings and animals. This is our world, the films of Cassidy and Shatzky seem to say, with all its soul-draining banality, reflected back at us with unusual clarity. If we want to change it, we can’t be afraid to first take a sustained look at it.

Eric Allen Hatch is a film programmer, critic, and consultant based in Baltimore, MD. Eric was the Director of Programming for the Maryland Film Festival from 2007 into early 2018. He wrote the recent, much-discussed article "Why I Am Hopeful" for Filmmaker Magazine, and takes the pulse of the North American film-festival scene in his monthly MUBI Notebook column "Infinite Fest."