Before The Streets Allows Its Indigeneous Hero to Heal 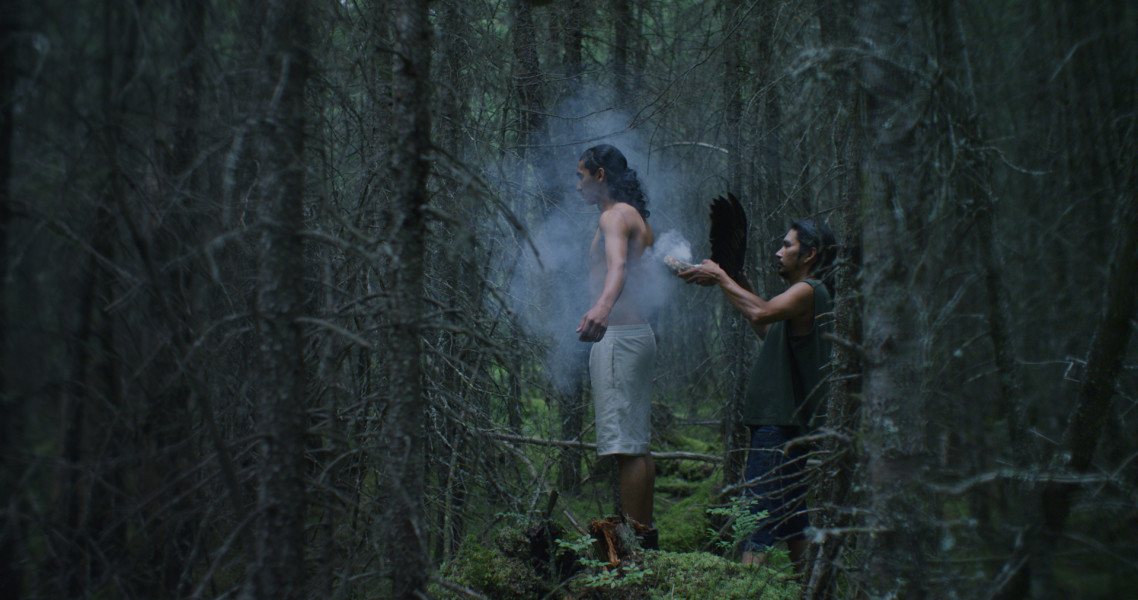 In her debut feature Before the Streets, playing as part of TIFF's Next Wave Film Festival, filmmaker Chloe Leriche dives into the complex contemporary reality of Canada’s First Nations. Set in a Atikamekw Nation community in Quebec, the film is performed entirely in the Atikamekw language. It opens with the fractured young protagonist, Shawnouk (played by Rykko Bellemare), struggling to engage with his family and surroundings. Evidently dispassionate and often at odds with his mother’s new boyfriend, Shawnouk gets coaxed into a robbery he’s reluctant to carry out. When the crime goes wrong and results in an unexpected death, the confused and guilt-ridden young man struggles with feelings of loss and disconnection, and embarks on a journey of healing and redemption.

Though Before the Streets starts many conversations, it tackles a particularly important and relevant issue regarding Indigenous approaches to healing and justice. In a community implicitly pressured by Euro-Canadian frameworks, providing Shawnouk with a traditional Indigenous healing is crucial to his survival. Shawnouk’s process takes place in the forest, but ultimate empowerment is only achieved through truthful reconciliation with family and friends.

Dating back thousands of years, the restorative justice process focuses on addressing the root cause of the crime and rehabilitating offenders to avoid future harms. Strengthening relationships rather than isolating oneself is vital to offenders’ recovery, and the ultimate goal is reconciliation for all parties involved. Programs may include healing circles, community service, cultural activities, essays and formal apologies; for Shawnouk, music therapy, drumming, and nature are integral activities.

This exploration comes at an important time in Canadian history. Across the nation, low success rates and systemic racism have led to significant criticism of the traditional justice system. Though Indigenous peoples account for roughly 4 per cent of the Canadian population, Indigenous populations are grossly overrepresented in our criminal justice system, making up 23 per cent of federal inmates. The numbers are even higher for youth.

Canada’s long history of discrimination against Indigenous peoples has built a toxic and inescapable cycle of crime; racist federal policies and the legacy of residential schools have impoverished these communities and consigned many individuals to the margins of society. Those backed into breaking the law, obscuring notions of guilt and innocence at best, are often further deprived of effective rehabilitation and guidance, driving many to commit repeat offences: 50 per cent of Indigenous youth released from jail eventually return. Yet the focus on redemption in restorative justice provides a beacon of hope for challenging this cycle. Facing and accepting the suffering one has caused ensures growth in offenders, and valuable reintegration preparation prevents isolation upon release.

Shawnouk is a powerful character to observe in this context, especially given that his crime is committed in self-defence and his hiding the result of the realities of injustice within our criminal justice system. His journey back to himself and his people takes us beyond the crime, as Leriche invites the audience to observe and appreciate restorative power. Both gritty and tender moments are used to explore the young man’s healing, and sensory shots linger on both hands and crafts to capture the potent richness of the community. Before the Streets both entertains and sparks conversation around issues relevant to both local communities and the nation as a whole.