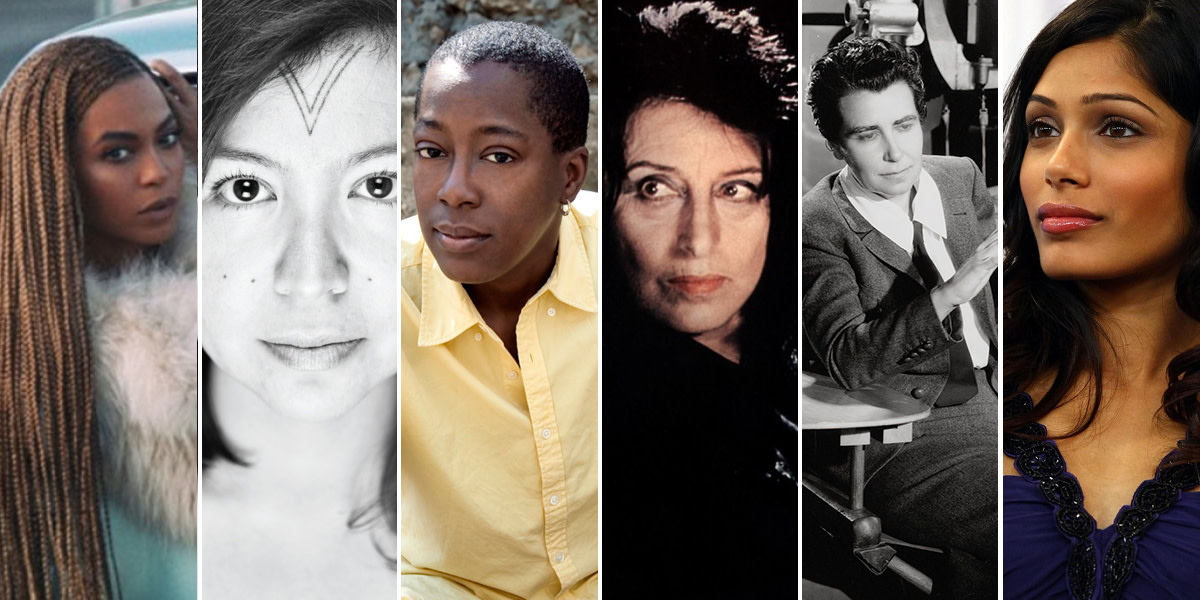 In honour of 2017's International Women's Day theme, #BeBoldForChange, today we’re celebrating some of the inspiring voices who are helping to forge a better working world for everyone

Those who paved the way “In the so-called French New Wave, I was the only one. Now, you see women coming from everywhere and doing strong films with different approaches to stories than men. Just as strong, but different. I feel proud of that, in a way. Not that I was supposed to take care of that, but all these women expressing [themselves] through cinema makes me feel good.”

Agnes Varda reflects on a life in cinema unlike any other “While Weber’s contributions to film history are on par with those of such household names as Griffith, Georges Méliès, Edwin S. Porter and the Lumières, history has not been kind to her. Only recently have attempts to restore her legacy found some measure of success, thanks largely to restorations of some of her most significant surviving films.”

Our new column Silent Review looks at the trailblazing women who gave women a voice in the days before the films talked, including Lois Weber, Dorothy Arzner, and Nell Shipman. "On November 8, 1946, nine years before Rosa Parks made Civil Rights history by refusing to give up her seat to a white man on an Alabama bus, Canada had a historic moment of its own. It happened at the movies."

Our privilege to go to the movies and sit where we want exists because someone fought for the right of so many to do so. That someone, Civil Rights icon Viola Desmond, will be the first Canadian woman to grace our national currency.

“There’s all kinds of ways in which not making opportunities for queer people, for trans people, for people of colour, is just easier. You get an opening for an intern or for an entry-level job, a PA, and you have five emails from friends of yours who all have kids who are kids of privilege. Kids who go to a really expensive college and who have the summer off. And whose parents are paying for their lives, so they can come and be your interns. You want to hire them because you've met them and they're brilliant. Then you realize, "Oh, trans kids don't actually have parents who are paying for their lives." They're not on their college break, they're dealing with transitioning. Queer kids, people of colour, they didn't grow up in a culture where somebody said, "Do you want to go to film school?" If you're not conscious all the time of using your privilege as ways to invite people who don't have access in... you slide back into your default, so easily.” “There's not an even playing field at the moment. And at the end of the day, it should all be based on credit and talent. Television has definitely defied that. We've seen a real resurgence of female characters on television. There are so many female writers and directors working in TV, it's getting to be almost 50/50. The film industry needs to take a lesson or two from that.” “This is the institutional bias, that you’ve somehow been taught as you’ve risen the ranks in the studio, that it’s a safer bet to go with a man. That’s the trust gap. The women have given you better financial results, yet your gut’s still telling you to give them less money to work with. And the indie distributors are choosing not to take a risk on women’s movies.”

Stephen Paternot, CEO of Slated, breaks down the disheartening numbers behind it all. “Knowledge is power, but what’s often not addressed in film circles is what kind of knowledge is given power. This is essence the reign of the canon, which most academic film schools frame their curriculum around. It’s learning about the Lumière Brothers and not necessarily Alice Guy-Blaché; about the technical work of D.W. Griffith’s The Birth of the Nation in favour of discussing its role in inscribing racist imagery of black bodies; of having entire classes on Alfred Hitchcock and not Med Hondo or Agnès Varda. And as this canon has shaped criticism, it feels like the game has become about holding a certain deck of cards. Show up to the table with anything other than what’s been deemed an ace and good luck trying to take the hand.” After an institutional critique voices by leaders and filmmakers in the industry, Telefilm Canada has announced that it will be committed to full gender parity in film financing by the year 2020, for women in the roles of director, screenwriter and producer. Writer/director/star Alice Lowe is all about about seizing the moment, which is why she made her film Prevenge while nearly eight months pregnant.

“Never, ever stop the delusional pursuit of your own voice. Find the person who hears it and then tells you kindly how to make it sound even better.”

Canadian filmmaker Molly McGlynn pens a heartfelt personal essay on how rejection made her a filmmaker. Trans actor Mya Taylor discusses the obstacles in her way before winning the Independent Spirit Award for her performance in Tangerine. “I did everything to make it work because I never imagined I could do something else. I would be unhappy without cinema and stories.”

Quebecois filmmakers Anne Émond and Chloé Robichaud find inspiration in film and in each other.

"Women get the tough 'there's no money, go try and do something with it' opportunities. They almost never get the 'here's a lot of money and time, go work with an existing franchise' ones. I'm really committed to what I do, I love who I work with. The hope is to be the change that you want to see. I remember when I saw Kathryn Bigelow won the [Best Director] Oscar [for The Hurt Locker], it was everything to me — it made me go, 'Oh, this is possible. Finally, they let someone in.' For the women that are coming next, I just wanna say we can do this, even though it's really, really fucking hard."

Filmmaker Ry Russo-Young on navigating change in Hollywood from within.

Those who continue to tell stories “We’re used to seeing women show up and provide lines to someone else, contribute to someone else's story. That term 'a strong female character' is so overused that it means absolutely nothing. I think what they really mean is someone who exists as a human being with multiple goals and a multifaceted approach to people, places, and life.”

Female writers, performers, and film scholars discuss the legacy of Anna Magnani and the fine art of “giving no fucks."

“It was really about making a portrait of a woman. I wasn't sure, while I was writing it, where that woman would be going or how it would end. I just wanted to be faithful to reality as I observe it. What I enjoyed about the making of the film was discovering that there was actually more light in that story than I thought there would be.”

Mia Hansen-Løve describes her collaboration with Isabelle Huppert in Things To Come.

“Beyoncé’s stardom and privileged status allow her to reach global masses in a way that female Black filmmakers such as Dash could only dream of. By circulating images and iconography of Daughters of the Dust, Lemonade functions as a site of preservation and remembrance.” “When I'm trying to create a visual metaphor, I try to depict it in a way that has not been depicted before. Sometimes that involves montaging and juxtaposing contrasting images. You just keep massaging and working with it until you feel satisfied that you are saying something that needs to be said, but you're saying it in a different way that makes the viewer have an "aha!" moment. That's what I like doing.”

Daughters of the Dust director Julie Dash explains how she creates powerful images.

“When I was even younger than 10 years old, I would look at my father's eagle while he was away. And I was always helping him train the eagle. And sometimes, a few times, when my father did good, I would go hunting with him. I grew up in a eagle hunter's family. My grandfather and all the younger brothers are eagle hunters. Everything looked so beautiful. So that's why I decided to be an eagle huntress.”

The 13-year-old subject of The Eagle Huntress takes on a tradition that has always been passed down from father to son.

“That’s the thing I love about books the most, it’s the only art form where you can truly enter the mind of another human being… When you’re sitting across the table from somebody, even someone you know very well, you can perceive a lot of things. But you can’t perceive what’s exactly in their mind. What a writer gets to do, through a character, is tell you!”

Wild author Cheryl Strayed describes her passion for novels and how she adapted her grief from the page to the screen. "Christine Chubbuck (the person) looks somewhat like Joan Baez or Patti Smith, tall with long limbs, high cheekbones and a prominent brow. Rebecca Hall developed an impressive set of gestures for the character — tensing her lips, chewing her cheeks, furrowing her brow, as well as deepening her voice and stiffening her posture. The perfectionism and idealism that are her downfall are also what brings her performance focus and immediacy." "Dunye does not purport to depict the Black lesbian experience — because there isn’t a singular one — but rather aims to portray her own experience as a Black woman who identifies as a lesbian. Her audience is privileged to witness and celebrate the ways of being that she brings to light. Dunye’s sincerity shines through in her performance, effectively humanizing the perspective she presents. We’re left rooting for her in all of her plurality."

Lydia Ogwang writes on Cheryl Dunye's The Watermelon Woman, the first feature to be directed by a Black lesbian filmmaker. “Part of the reason it took so long [to make the film] is that it is such an important issue for Inuit, I felt a lot of pressure, and I didn’t want to mess up.”

Angry Inuk director Alethea Arnaquq-Baril joins the Yo, Adrian podcast to open up about the inherent responsibility in portraying one's community.

...and those giving us something to cheer for

“It's a given. It's expected that this woman would be strong, would be capable, and when paired with a group of other women, they're only going to be more strong and more capable.”

“We were in Sooke, BC and we had Pamela Anderson flying from a trapese. The rain was coming down, she was wearing a cape and we were blasting music. It was pretty incredible.”

Nadia Litz enters the lightning round in our Q&A series Coffee or Tea.

“I was driving around Los Angeles with Warrington Hudlin, and Warrington says I heard that Quentin Tarantino is writing a project for you.. And I said Really, Me? And he says And that's him right there! And I'm like What the fuck?” “Female friendships weren’t new in 1991 when two badass broads took off for the roadtrip of a lifetime. And they’re not new now. So while we may cite our cinematic heroines as special — and they were — it’s no anomaly. Women become buds all the time in everyday life, it’s just up to us to bring them to the big screen. So Ghostbusters backlash be damned: let’s see more female friendships on film.”

Writer Anne T. Donahue follows the trail of female friendships on screen from The Simpsons to Thelma and Louise to Bachelorette (with and a ton more classics in between.