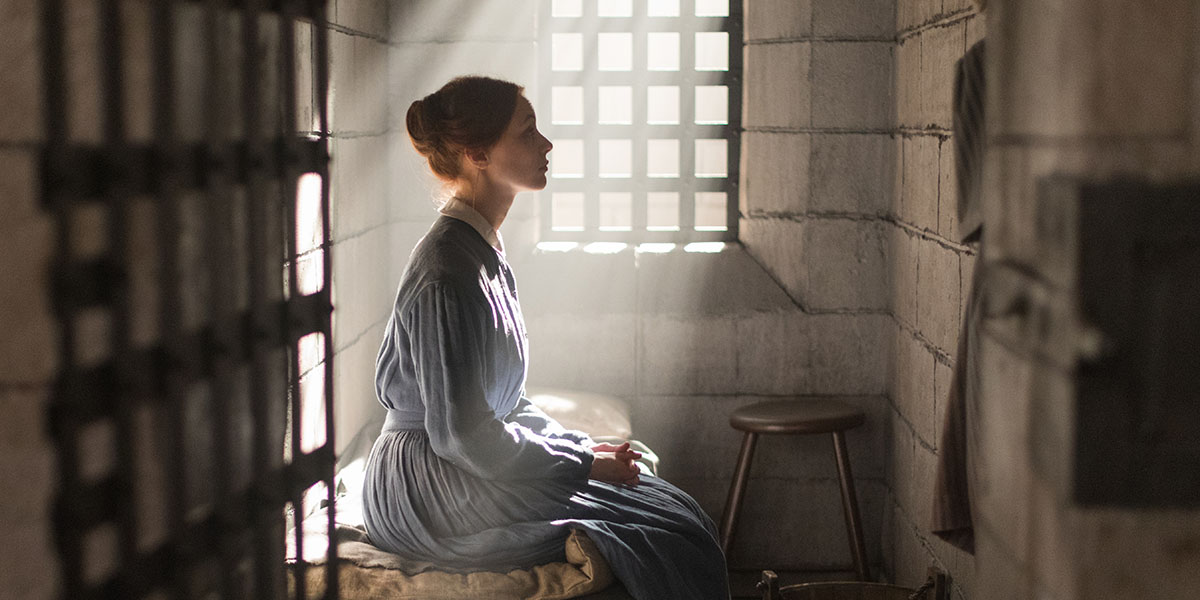 The CBC miniseries, created by Sarah Polley, is another stellar Atwood adaptation that reflects the past and present of women

This past month, Canadian author Margaret Atwood received two separate standing ovations for two different new adaptations of her work. The Hulu series The Handmaid’s Tale, based on Atwood’s 1985 bestseller, swept the Emmys on September 17, receiving eight awards including Outstanding Drama Series, Outstanding Director in a Drama Series (for Reed Morano) and Outstanding Actress in a Dramatic Series (for star Elisabeth Moss, who praised the source material in her acceptance speech). Earlier in the week, on September 14, the first three episodes of Alias Grace, the much-anticipated CBC–Netflix adaptation of Atwood’s 1996 historical fiction novel, premiered to critical acclaim in TIFF’s Prime Time programme.

The six-part miniseries (which just began its CBC run and will stream on Netflix later this fall), casts former TIFF Rising Star Sarah Gadon in the fact-based story of Grace Marks, a teenaged Irish servant living in Upper Canada who was convicted for the 1843 murder of her employer, Thomas Kinnear, and his housekeeper, Nancy Montgomery. Alias Grace tracks Marks’ life between ages 15 and 40, through flashbacks and horrifyingly surreal dream sequences, as she gives her testimony to psychiatrist Simon Jordan (Edward Holcroft), who must determine if she is insane, as persistent rumours suggest, or simply innocent.

Alias Grace is a passion project helmed by a group of female filmmakers at the height of their powers. Show creator, writer, and co-producer Sarah Polley first attempted to option Alias Grace when she was 17. In 2009, after being nominated for an Academy Award for Away From Her, her adaptation of Alice Munro’s short story “The Bear Came Over the Mountain,” she acquired the rights from Atwood’s team. After Polley directed two features (Take This Waltz, Stories We Tell), as well as giving birth to her two daughters, Alias Grace is finally here and it is a force to be reckoned with. Directed with a ropey, psychological spine by acclaimed Canadian filmmaker Mary Harron (I Shot Andy Warhol, American Psycho) with a cerebral star in Gadon, the miniseries is a haunting mystery worth unravelling. It’s also uniquely Canadian, playing into our cinematic heritage of dark thrillers which rely on blood, sex, death, and quirky humour. (Director David Cronenberg plays a small but crucial role.)

“When I first sat down with Sarah Polley and Mary Harron, I asked Sarah, ‘Why this novel?’,” Gadon says during an interview at TIFF ’17. “For her, it’s the most important piece of literature she’s ever read, and has somehow informed everything she’s ever done. I thought, ‘Oh my god, this is massive, and her expectations of me are going to be great.’”

Harron, who’d directed Gadon in her 2011 gothic romance The Moth Diaries, revelled at the chance to see the actor challenged by the demanding role.

“I knew she was an incredible actress with great subtlety and sensitivity who could make emotional adjustments very quickly, easily, and subtly,” says Harron. “But I always felt like she had a lot of depth and a really great range that wasn't always demanded of her in the roles that she'd been given.”

Gadon, a graduate of the University of Toronto’s Cinema Studies program who has appeared, often playing ironic femme fatales, in films by David Cronenberg and Denis Villeneuve, says Alias Grace represents a shift in how she wanted to approach her career.

“When I was studying film and working part-time as an actor, I was so dogmatic about my approach to work,” says Gadon. “I was all about auteur cinema, contributing to a director's body of work, and that was the be-all and end-all. It suited where I was at the time because I was in my early twenties and I didn't necessarily want to play the ingenue or the manic pixie dream girl... I wanted to make meaningful cinema and contribute to people's bodies of work that you would talk about years later.

“Two years later, I was in James Schamus’ office after we'd made Indignation. James said to me: ‘All you young actors make the same mistake. You chase directors when, really, you should be chasing roles.’ It was right around that time I read the script for Alias Grace, and because of that it was the most creatively fulfilling experience I've ever had.”

Gadon says that the process of making the show was a “double-edged sword.” While playing the complicated protagonist was a thrilling opportunity, it also exhausted her both physically and mentally.

“There are so many different versions of Grace that keeping straight is a difficult task,” the actor explains. “It’s hard to play a character from ages 15 to 40, [especially one] who has an accent as difficult as the Northern Irish. Then there was the physical challenge, because Sarah [Polley] and Mary wanted me to perform all of Grace's household tasks — so I was really milking a cow, I was really tending to a Victorian kitchen, I was really collecting eggs, I was really hauling buckets of water around.”

“I remember reading the script and becoming so entangled in the different versions of Grace, I would have to go on a run to let it out,” she says. “The first couple of weeks, my jaw was sore I thought, ‘Oh my god, I'm so stressed out, I'm grinding my teeth at night.’ Kerr [Logan, who plays groundskeeper James McDermott] flew in from Northern Ireland and said, ‘No, it's just a really tight-jawed accent and all of your jaw muscles are really weak!’”

As much as Alias Grace is a showcase for Gadon, it also privileges another captivating Canadian performer. Rebecca Liddiard (no stranger to period dramas, having appeared on Reign and Houdini & Doyle) offers both warmth and pathos in the pivotal role of Mary Whitney, a fellow servant who welcomes Grace to her new surroundings.

“Mary is a very powerful force in Grace's life,” says Liddiard. “So I knew even from reading the book that whatever I did had to have this warmth and light to it.”

Both Gadon and Liddiard praise the extensive rehearsal process, which added new layers and complexities to their performances. Not only was the cast sent to a boot camp at Black Creek Pioneer Village to learn how to churn butter, flip mattresses, and stoke fires, but Polley and Harron also facilitated deep conversation on what it meant to be an immigrant woman working in service in the 1800s.

“We talked a lot about the significance of what these events meant in the context of that time period,” Liddiard explains. “The real weight of a cast iron pot, or an iron. What it's like to move around in all of these clothes. We talked about what their skin would be like, their hands. On the other period shows I've worked on, there's no time for that exploration. One of my favourite scenes is when Mary is teaching Grace how to fold a pad when she gets her period.”

While the lives of female immigrants in the 1800s were defined by their relationship to work, they were also shaped by the threat imposed by men. In past interviews, both Polley and Harron have remarked how, as with The Handmaid’s Tale, Atwood’s source material offers another unsettling parallel to the current political climate and ongoing debate about the extent to which men wrest control over women’s bodies and their stations in life. 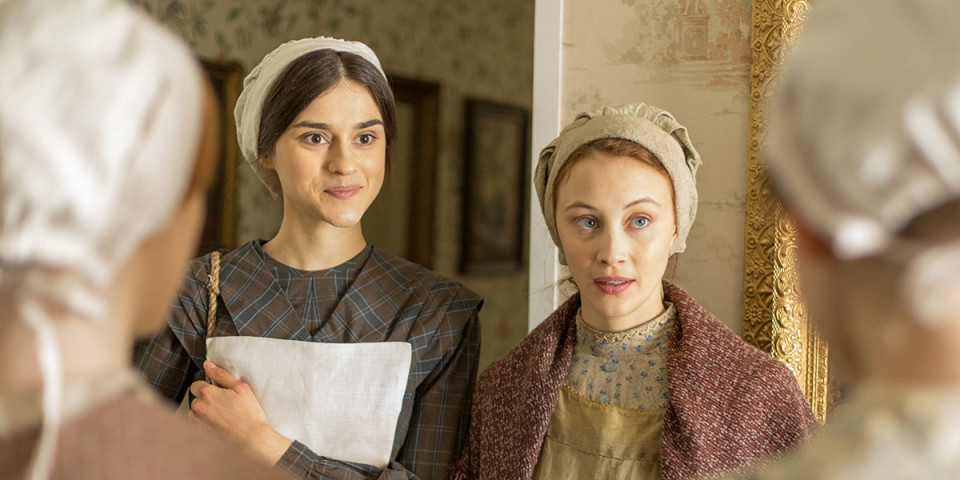 “Alias Grace is a very radical interpretation of the 19th-century country house culture,” says Harron. “You don’t often see the perspective of the lives of servants and immigrants from a political or a female point of view.”

She adds: “Women at that time had very little power, unless they could exercise it indirectly or manipulatively. They're not given power over men, they have to find it. And the girls of the underclass like Grace Marks have no power at all. Those girls were literally sexual prey for their masters and had no recourse. If they complain, they'll be fired. If they get pregnant, they'll be thrown out. Even in her own home after her mother dies, Grace becomes prey to her father. Before then, she was subject to physical violence.”

In the first three episodes alone, Harron films harrowing moments of violence (an abortion scene which ends in death, an attempted sexual assault by way of Grace’s father) that leave a mark of fear on the viewer like a bruise. Yet her style of filmmaking is inherently classical and controlled, thanks to painterly cinematography by Brendan Steacy that recalls the 17th-century portraits of Dutch domestic life by Johannes Vermeer, as well as the pioneering work of 19th-century photographer Julia Margaret Cameron. (Both were key references for Harron’s lookbook.)

Each episode offers a narrative centerpiece via long interrogation scenes between Grace and Dr. Jordan, which Gadon describes as a cat-and-mouse game. Harron chose to film these scenes in uniquely forceful close-ups, highlighting the intensity in Gadon’s eyes. It’s a female gaze that could burn a hole into you.

“I think Mary was the perfect person to direct Alias Grace because she is so intelligent when it comes to the psychological complexity of the character,” says Gadon. “Of course, the complexity of narrative filmmaking in and of itself is also something she's very conscious of.”

“What's so unique about this piece is that it embodies female subjectivity, but in a way that questions it. We don't know if Grace is a reliable narrator. As women, we are complicated, we exhibit many different versions of ourselves, often in ways when our identities are being projected onto us. I think that’s why all these talented women were drawn to this character because she doesn't necessarily sit cleanly anywhere.”

Alongside The Handmaid’s Tale, Alias Grace comes precisely at the end of a traumatic year when women — not only in the film and television industry — are critically examining and re-evaluating their roles in society in order to issue themselves more political agency. And while the septuagenarian Atwood appears to be 2017’s voice of a generation, her prophetic novels have always a given voice to the uncertainty and trauma women feel navigating the world. Alias Grace, the miniseries, provides yet another release valve. This collaboration between all the female filmmakers on Alias Grace (including the female executives at Netflix and CBC who made it possible) has created a vital piece of entertainment that is as political as it is personal. Like Polley’s films, it’s emotionally complex and stands alone to uniquely privilege a female experience in its narrative and cinematic construction.

Says Liddiard, when asked what Alias Grace brings to the table: “Margaret Atwood is difficult to read, it's heavy stuff, it's literary. With Alias Grace, the miniseries, you not only get the story, you get Sarah Polley’s take on the material. It's not some drippy, high-quality period drama; it has the essence of a messed-up, psychological thriller. There's a weird humour to it, and it's scary. I was speaking with Margaret today and asked her: ‘Now that you've seen all six episodes of the show, what did you think of it?’ She said, ‘It's much scarier than the book.’ When you're watching the series, you get wrapped up in it. It's like you're walking on a tilted floor.”

The Rise of Cinematic TV