Herbie Hancock, The Yardbirds, and the mod sounds of Antonioni's swing through London 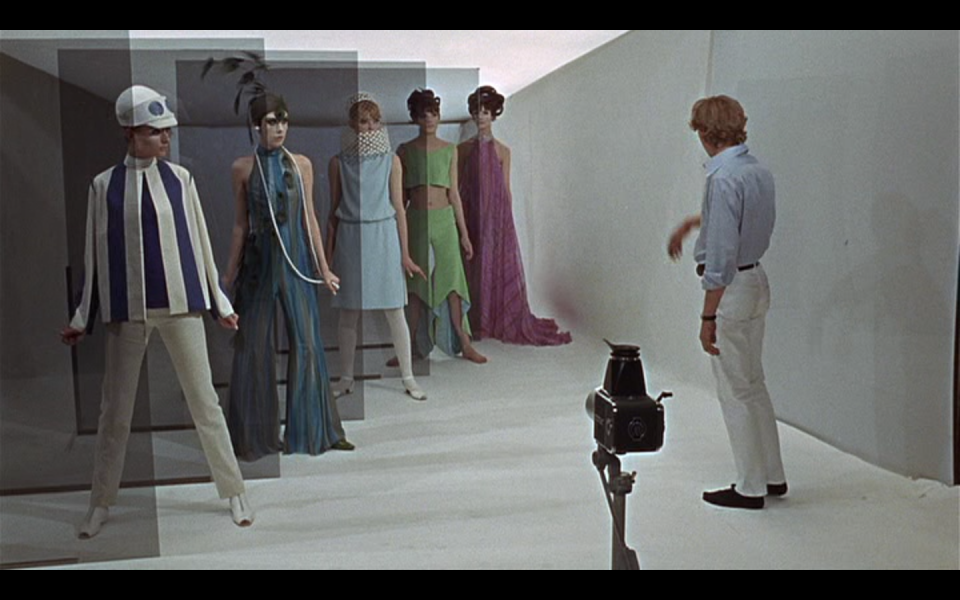 With all due respect to mimes, tennis players, Vanessa Redgrave, and out-of-frame assassins, for those of us doing double duty as cinephiles and rock ’n’ roll fans, there is one scene in Michelangelo Antonioni's Blow-Up that can't help but eclipse the rest: The ultra-mod nightclub set piece in which David Hemmings wild-goose-chases his way into a Yardbirds gig.

This screen moment is so studiedly Swinging London, so quintessentially 1966 in spirit and presentation, it draws power from how contrived it actually is. Using impeccably styled and artfully positioned extras and minimal design, Antonioni and his crew trap the aesthetic of this particular countercultural flashpoint in a bottle and distill it into concentrate. It's also a brilliant-sounding five minutes, thanks to The Yardbirds' blistering psych take on Tiny Bradshaw's "Train Kept A-Rollin'" — a cover popularized by the band and later rewritten and re-recorded for Blow-Up as "Stroll On" due to copyright issues.

For his mocked-up rave-up, Antonioni went to the trouble of recreating the Ricky-Tick club, a real-life mod nerve centre of the era located in the nearby town of Windsor but rebuilt on a soundstage at Elstree Studios in early October of '66. Of a piece with the director's surreal read on the London scene itself, everything about the Ricky-Tick sequence looks authentic yet feels deliberately off. The crowd stands stock-still and blank faced, some of them half-asleep. Precisely two punters in the club are dancing; one of them, seen in the clip below at 2:05, is future fashion editor and TV presenter Janet Street-Porter. Another Easter egg in this scene: it is widely believed that a young, pre-Python Michael Palin is among the faces staring down the band at 1:31. 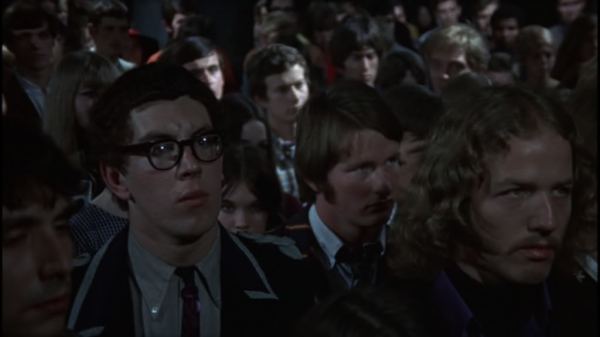 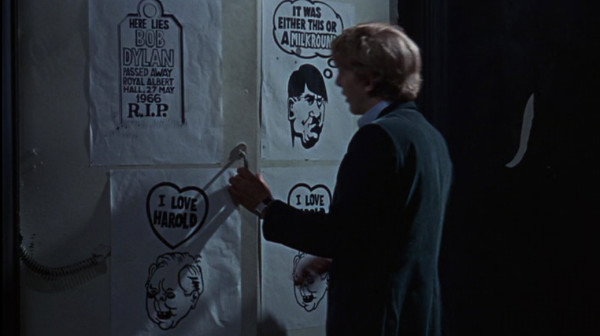 A cheeky Bob Dylan tribute, among other poster curio. 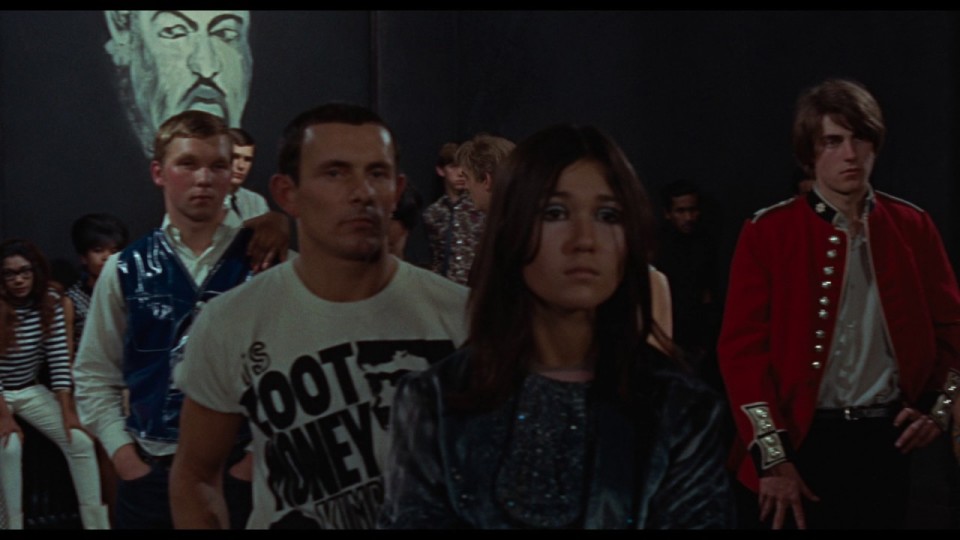 It's almost worth pretending that "Maybe Michael Palin" recognizes — like us present-day mods and rockers — that the action on stage is both unusual and, somehow, too perfect. This is, after all, a special lineup of The Yardbirds, a fact now firmly entrenched in classic-rock lore, because Blow-Up captures the group during the few months when Jeff Beck and Jimmy Page overlapped as dual lead guitarists.

Another oddity is Beck's famous guitar smash-up, which finally shakes the crowd out of catatonia and into a frenzy. This outburst feels suitably incongruous as the guitarist's face flickers between grimace and gum-chewing cool. In a neat little narrative flourish, Beck is sent into his fit of pique by a crackling amplifier. Antonioni tips his directorial hand here by using a technical problem to set the "fictional" musician off: Beck wasn't known for destroying his gear onstage — and even when acting out of character for a renowned Italian maestro, he wasn't about to total his trademark Les Paul Custom. (He would later remember Antonioni as "a pompous oaf — I didn't like him at all.") Look closely and you'll notice that his guitar, slung improperly over one shoulder for the smash take, is a fake. In fact, it's a fake Gibson 175, a model of guitar used not by Beck but by future Yes guitarist Steve Howe, whose band The In-Crowd were all set to perform the scene before popular veterans The Yardbirds swooped in. 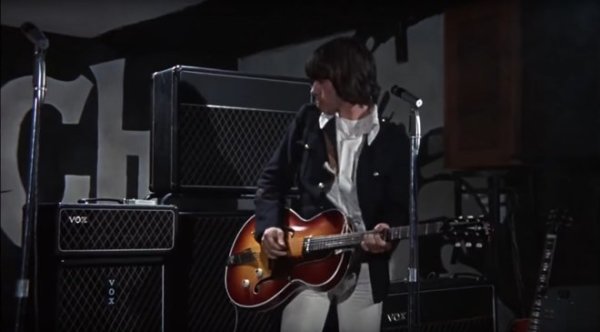 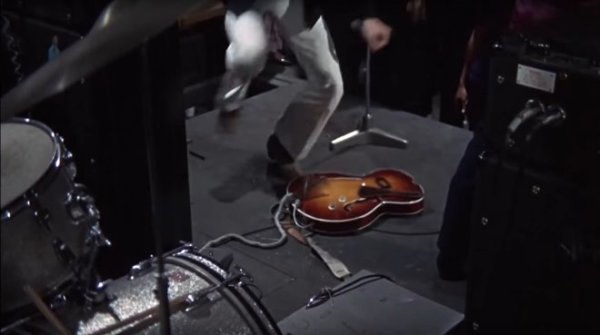 The In-Crowd would've been stand-ins anyway for The Who, whose use of "autodestruct" in their live act was Antonioni's inspiration for the scene's climax. The director was so enamoured of Pete Townshend's equipment smashing — which started out as an accident in 1964 and by 1966 was a cathartic ritual — that he'd appealed unsucessfully to them to appear. But The Who's influence on Antonioni must've been a result of his investigations around London, because they were not his first choice, either. His original vision for Blow-Up's nightclub band, The Velvet Underground, hadn't yet released an album, weren't from Britain (save for one member, Welshman John Cale), and ultimately never played outside of North America during their original incarnation. Hassles with work visas reportedly stood between the Velvets and the London journey, but their leathery Lower East Side look and off-the-charts sound would have yielded a different kind of onscreen freak-out and surely altered the film's musical legacy.

And yet, The Yardbirds provide about one-tenth of the music we hear in Blow-Up and on its accompanying soundtrack album. The real swing for most of this strange London odyssey is American in origin. The ingenious score by Herbie Hancock, then just 26 years old, mixes up smooth lounge jazz, funk, and bebop. Hancock's idea was to provide only diegetic music — with the exception of the closing number, the score is only heard over stereos and car radios, firmly rooted in the story world as it glides along with Hemmings like some inner monologue.

As for what else might've been on that car radio in the autumn of 1966, and what else inspired the mood of Blow-Up and vice versa, please enjoy our accompanying playlist, a Ricky-Tick-worthy rave-up, with annotations:

"Main Title (Blow-Up)" – If Hancock's scene-setter sounds today like stock "groovy" 1960s movie music, that's probably because it sets the standard for the era. This piece also fakes us out, suggesting a much lighter film before shifting after 30 seconds to deceptively light yet portentous piano bop.

"Train Kept A-Rollin'" – You get to hear "Stroll On" one-and-a-half times in the film, so here's The Yardbirds' straight cover of Johnny Burnette's 1956 rockabilly cover of Tiny Bradshaw's 1951 jump-blues side. This version, recorded pre-Page in 1965 as the B-side to "I'm a Man", is only half as heavy as the band's proto-Zeppelin 1966 update, but it's just as speedy, and features trademark harmonica by Relf as well as two nutbar-by-'65-standards solos from Beck.

"Run Run Run" – Arguably the most swinging-mod (and R&B-sounding) track off The Velvet Undergound & Nico and a staple in the band's 1966 sets, this could've been a Blow-Up contender had they got those visas sorted out. It certainly suggests more of a kinship with Brits like The Who, The Yardbirds, or The Creation than with any US band. Then again, the Velvets also got into the spirit of Hancock's Main Theme, deliberately or not, with a 1967 instrumental number called "Booker T" (which wouldn't see release until the 1990s), so maybe they would've tried something like this instead:

"Have You Seen Your Mother, Baby, Standing in the Shadow?" – This snotty, epochal blast from the end of the Stones' mid'60s hot streak peaked at No. 5 on the UK charts when Antonioni was shooting the Ricky-Tick scene.

"Biff Bang Pow" – If Antonioni wanted The Who so badly and couldn't get them, you've got to wonder if someone thought to introduce him to The Creation, a group who not only mixed pop-art, distortion, and bowed guitars (ahead of Jimmy Page), but also could've blended in amongst the crowd at that Yardbirds show.

"Bring Down the Birds" – Yes, this groovy little number from Hancock's score later provided the bass sample for Deee-Lite's 1990 smash "Groove Is in the Heart".

"Blow Up" – The In-Crowd may have been dropped from the film, but that didn't discourage them from recording this musical plot synopsis with the same title. They soon changed their name to Tomorrow.

"I Can't Control Myself" – On the heels of "Wild Thing" and "With a Girl Like You", The Troggs rounded out their annus mirabilis with this Top 10 hit, one of their last, in October '66.

"When I Come Home" – The Spencer Davis Group scored this hit as Blow-Up was in production. Within the next few months they released the million-selling classics "Gimme Some Lovin'" and "I'm a Man". By mid-1967, Steve Winwood had left to form Traffic and the band packed it in.

"Thomas Studies Photos" – You know something important is going on in the darkroom if a song like this is playing in the background.

"In the City" – The B-side to The Who's "I'm a Boy", which Pete Townshend once described quite truthfully as having topped the UK chart "for about half an hour" in October of 1966. "In the City" inspired the name and melody of The Jam's debut single a little over 10 years later.

"Painter Man" – The Creation were singing about their art-school selves but could've been describing the Blow-Up milieu on this, the A-side to "Biff Bang Pow". Another release from the prolific month that was October 1966.

"The First Cut Is the Deepest" – Los Angeles–born Pat "P.P." Arnold defected from the Ike & Tina Turner Revue during a UK tour in late 1966 and signed with Stones impresario Andrew Loog Oldham's Immediate Records. She remained in Britain, collaborated with many groups including the Small Faces, and landed this stunning solo hit, written by Cat Stevens, by May 1967.

"Sunny Afternoon" – The Kinks were on a creative high when this single hit big internationally, including No. 1s in Britain and Canada, in the summer of '66.

"All I See Is You" – Dusty Springfield scored her fourth and final UK Top 10 hit of 1966 the week David Hemmings was buzzing around the recreated Ricky-Tick. It was probably on the radio in that Rolls Royce he's seen driving.

"Sunny" – That same week, two versions of the R&B hit "Sunny" were all over British airwaves: the original by US singer-songwriter Bobby Hebb, and this loungey cover by British star Georgie Fame.

"Bend It!" – Best known in Britain (at least before their music got the Tarantino treatment to brutal effect in Death Proof), the trickily-named Dave Dee, Dozy, Beaky, Mick & Tich followed up their fuzzed-out stomper "Hold Tight" with this zany, mandolin-driven hit, which reached No. 2 on October 6, 1966.

"I Can Take You to the Sun" – The Misunderstood were Californian transplants to London who picked up where The Yardbirds had left off with "Shapes of Things", picked up on what the early Pink Floyd was up to, and then pretty much anticipated the next two years of rock music when they dropped this prescient gem in December 1966. They were soon relegated to cult status when their singer was drafted by the US Army for service in Vietnam. (He fled boot camp for India, where he lived as a Hare Krishna monk for 12 years.) 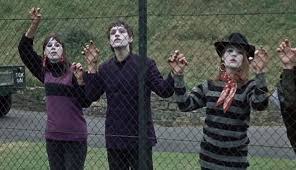